ABSTRACT: The current work defines development of a simple, rapid and precise method based on gas chromatography coupled with Flame Ionization Detector (GC-FID) for the quantitative estimation of diphenhydramine (DPH) present in the marketed formulations following the principles of green analytical chemistry. The analysis was performed using Zebron Phase: ZB-DRUG-1 column with Nitrogen as a carrier gas having a flow rate of 1 ml/min. The injection volume was 1 µL and with the split ratio of 1:10. The retention time of the drug was found to be 4.5 minutes. The developed method was validated according to the ICH guidelines, proving the method to be sensitive towards the analyte with accuracy (mean recovery = 98%), linearity in the range of 2-10 µg/ml (r2 0.993), precision (intraday = 1.118% RSD, interday = 1.16 % RSD), LOD 0.2 µg/ml and LOQ 0.5 µg/ml. The degradation study showed that the drug remains stable in acid, base, neutral, oxidation, and photolytic method. The developed method can be effectively employed for the day to day analysis of DPH in pure and marketed formulations by industries and not so well equipped laboratories, as the method employs direct analysis of DPH without any derivatization technique by gas chromatography with simple flame ionization detection.

INTRODUCTION: Diphenhydramine (DPH) Fig. 1 is an antihistamine which comes under the class of the first-generation antihistamine. It is a derivative of ethanolamine with sedative and anti- allergic properties and acts by binding and antagonizing histamine H1 receptor 1. Diphenhydramine competitively inhibits the histamine-1 (H1) receptor, thereby alleviating the symptoms caused by endogenous histamine on bronchial, capillary and gastrointestinal smooth muscles, mechanism of the CNS depressant effects of diphenhydramine is unknown 2.

The literature survey disclosed, titrimetric methods for the estimation of DPH has been described in European Pharmacopoeia 3 and British Pharmacopoeia 4 where has HPLC has been described in United States Pharmacopoeia 5. Several unofficial analytical techniques such as fluorometry 5, spectrophotometry 7, 8, 9, 10, 11, 12 and electrochemical analysis 13, 14 has also been reported for the estimation of DPH in pharmaceutical preparations. Atomic absorption spectroscopy 15, 16 and capillary electrophoresis 17, 18, 19 was also used previously. Some of the chromatographic techniques such as HPLC 20,21 LC-MS 22, 23, HPTLC 24, 25 and GC 22, 26, 27. Comparison of other methods available for the estimation of DPH in references with the present developed method is as depicted in Table 1.

This paper is directed towards the development of a method for estimation of DPH present in the formulation and degradation study of DPH following the principles of green analytical chemistry 28. The method involves the direct analysis of DPH without any derivatization and use of no harmful chemicals which poses any harm to analytical chemists; it also minimizes the generation of analytical wastes during the process. The method was validated according to ICH guidelines 29. 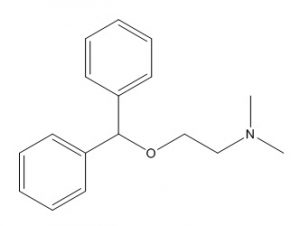 TABLE 1: COMPARISON OF OTHER METHOD AVAILABLE FOR ESTIMATION OF DPH WITH PRESENT METHOD

GC (Analytical) Instrumentation and Chromatographic Conditions: Shimadzu GC-2014 Coupled with flame ionization detector (FID) was used for method development, validation, and degradation study of DPH. GC solution software was used to control the instrument. A 10 µL syringe made by Hamilton CO., Reno, Nevada, USA was used for the injection of samples.

Zebron phase: ZB-DRUG-1 (dimethylpolysiloxane backbone with a special phenyl) column procured from Phenomenex private Ltd., Hyderabad, India, with an internal diameter 0.25 mm with a length of 30 meters was used for the analysis. The chromatographic conditions were as depicted in Table 2.

Preparation of DPH Standard Solutions: A Stock solution containing 100 µg/ml of DPH was prepared by using methanol as a diluent. Working standards having a concentration of 2, 4, 6, 8, 10 µg/ml was prepared by pipetting out 0.2, 0.4, 0.6, 0.8, 1 ml of stock to 5 different volumetric flasks and the volume was made up with methanol. All the solutions were sonicated for 5 min to remove the entrapped air.

Syrup: Syrup solution having a concentration of 5.63 µg/ml was prepared by making necessary dilutions using methanol, and it was sonicated and filtered through syringe filter having a pore size of 0.20 µm.

Tablet: Powdered tablet equivalent to 25 mg of DPH was dissolved in methanol, and further dilutions were made to get a final concentration of 5 µg/ml. The solution was sonicated and filtered through a syringe filter, having a pore size of 0.20 µm.

Method Validation: The method was validated according to ICH guidelines for the following parameters: Linearity, accuracy, precision, the limit of detection (LOD) and limit of quantification (LOQ), and system suitability.

The acid and alkali samples were neutralized. 5 ml of water was added to a UV stability sample and kept in a UV chamber for 4 h. The degradation studies for DPH areas depicted in Table 3.

System Suitability: After establishing the method conditions as described, the method was validated as per ICH guidelines for accuracy, precision, linearity, the limit of detection (LOD), the limit of quantitation (LOQ). Precision of the method was established by injecting the middle concentration 6 times intraday and inter-day. Accuracy, in terms of percentage recovery, was established by spiking the formulation at 80%, 100% & 120% (n=3). Linearity was established by injecting a series of dilutions in increasing concentrations (n=5). LOD & LOQ was established using standard deviation and slope. The selectivity of the method was assessed by comparing the retention time of standard and formulation; Quantitative analysis of DPH was performed under the established conditions. GC validation report of DPH is as depicted in Table 4. Blank, overlay, and standard chromatograms of DPH are shown in Fig. 3, 4 & 5, respectively. 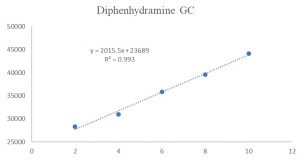 Precision: The precision was established by injecting the 6 replicates of middle concentration on the same day (intra-day) and the consecutive day (inter-day). The % RSD values were found to be less than 2% as depicted in Table 6.

Limit of Detection and Limit of Quantitation: LOD and LOQ was calculated with the aid of standard deviation (σ) and slope (s) by using the formula LOD = 3.3 σ/s LOQ = 10 σ/s, LOD and LOQ of DPH was found to be 0.2 µg/ml and 0.5 µg/ml respectively as depicted in Table 4.

Syrup: According to the label claim of the formulation every 5 ml of syrup contains 14.08 mg of DPH. 5 ml of syrup was taken in a 25 ml volumetric flask, and the volume was made up to 25 ml with methanol. Then 0.1 ml of the diluted solution was taken in a 10 ml volumetric flask and diluted to 10 ml with methanol to get a final concentration 0f 5.63 µg/ml. The % of label claimed drug found by GC-FID method was found to be 98.43%, which has been depicted in Table 11. The chromatogram of syrup sample is shown in Fig. 6

Tablet: According to the label claim of the formulation each tablet contains 25 mg of DPH. Weight of 10 tablets was noted, and then the tablets were crushed using mortar and pestle. Quantity of the tablet equivalent to 25 mg of DPH was transferred to a 25 ml volumetric flask, and the volume was made up with methanol. Necessary dilutions were made to get a final concentration of 5 µg/ml. The % of label claimed drug found by GC-FID method was found to be 98.08%, which has been depicted in Table 8. The chromatogram of tablet sample is shown in Fig. 7 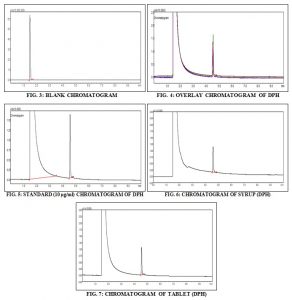 CONCLUSION: A simple, fast, accurate, sensitive, cost-effective and environmentally friendly method has been developed for the estimation of DPH in pure form and formulations along with the stability study of DPH following the principles of green analytical chemistry. This method can be used by industries and laboratories which are not very well equipped for the routine estimation of DPH present in formulations as the method employs direct analysis of DPH without any derivatization by gas chromatography with simple flame ionization detection.

ACKNOWLEDGEMENT: The authors are thankful to the Principal, JSS College of Pharmacy, Mysuru for providing necessary facilities to carry out the research work.