ABSTRACT: A simple, sensitive, selective, precise and stability indicating high-performance thin-layer chromatographic method for determination of quetiapine fumarate both as a bulk drug and from tablets was developed and validated as per the International Conference on Harmonization (ICH) guidelines. The HPTLC method employed aluminum plates precoated with silica gel G 60F254 as stationary phase. The solvent system consisted of methanol: butanol: ethyl acetate (2:1:1) and give compact spots for quetiapine fumarate with Rf value 0.76 ± 0.01 cm. Densitometry analysis was carried out in the absorbance mode at 220 nm. Linear regression analysis showed good linearity (r2 = 0.999) with respect to peak area in the concentration range of 1000–5000 ng/spot. The method was validated for precision, accuracy, specificity and robustness. The limits of detection and quantitation were 171.65 and 520.18 ng/spot, respectively. The method was validated for precision, accuracy, ruggedness and recovery. Quetiapine fumarate was subjected to acid and alkali hydrolysis, oxidation, thermal and photodegradation. The degraded products were well separated from the pure drug. The statistical analysis proves that the developed method for quantification of quetiapine fumarate as bulk drug and tablets was reproducible and selective. As the method could effectively separate the drug from its degradation products, it can be employed as stability-indicating one.

The antipsychotic effect of quetiapine fumarate is thought by some to be mediated through antagonist activity at dopamine and serotonin receptors.

Specifically the D1, D2 dopamine, the α1, α2 adrenoreceptor and 5-HT1A, 5-HT2 serotonin receptor subtypes are antagonized. Quetiapine fumarate also has an antagonistic effect on the histamine H1 receptor. It has no significant affinity for cholinergic muscarinic or benzodiazepine receptors. Drowsiness and orthostatic hypotension associated with use may be explained by its antagonism of histamine H1 and adrenergic α1 receptors, respectively.

Quetiapine fumarate's antagonism of adrenergic α1 receptors may explain the orthostatic hypotension observed with this drug. However, it is thought that the drug's therapeutic activity in schizophrenia is mediated through a combination of dopamine type 2 (D2) and serotonin type 2 (5HT2) receptor antagonism. Although quetiapine fumarate is known to bind other receptors with similar affinity only the dopamine D2 and serotonin 5HT2 receptor binding is responsible for quetiapine fumarate's therapeutic activity in schizophrenia 2.

Several analytical methods have been reported in the literature for the analysis of quetiapine fumarate from pharmaceutical dosage form. The techniques include HPLC 3, polarographic 4, HPTLC 5, 6 and UV Spectrophotometry 7 etc. forms. There are numerous methods to quantify quetiapine fumarate in biological fluid and human plasma, including HPLC 8, 9, 10, 11, HPLC-MS/ MS 12, LC-MS/MS 13. An ideal stability-indicating method shall quantify the drug per se and also resolves its degradation products. HPTLC has become a part of routine analytical techniques in many product development and analytical laboratories due to its advantages.

The major advantage of HPTLC is that several samples can be run simultaneously using a small quantity of mobile phase unlike HPLC, thus lowering the analysis time and cost per analysis with high sample throughput. The uniform particle size (7µm) of precoated HPTLC plates enables achievement of a greater resolution and an easy reproducible separation. Suspensions, dirty or turbid samples can be directly applied. Additionally, it permits simultaneous assay of several components in a multicomponent formulation or herbal extracts.

The aim of the present work was to develop an economic, accurate, specific, reproducible and stability-indicating HPTLC densitometric method for the determination of quetiapine fumarate in the presence of its degradation products and related impurities from a pharmaceutical dosage form. The proposed method was validated as per ICH guidelines 14.

Materials: Quetiapine fumarate was received as a gift sample from Tripada Pharmaceuticals, Ahmedabad, India. All chemicals and reagents used were of analytical grade and were purchased from Merck Chemicals, India.

HPTLC instrumentation: The samples were spotted in the form of bands of width 6mm with a Camag microlitre syringe on precoated silica gel aluminium plate 60F-254 (20 cm×10 cm, 200µm thickness, E. Merck, Germany) using a Camag Linomat V (Switzerland) sample applicator. The plates were pre-washed by methanol and activated at 60 ◦C for 5 min prior to chromatography. The mobile phase consisted of methanol: butanol: ethyl acetate (2:1:1). Linear ascending development was carried out in twin-trough glass chamber saturated with the mobile phase. The optimized chamber saturation time for the mobile phase was 30 min at room temperature (25±2 ◦C).The length of chromatogram run was 80 mm. Subsequent to the development; TLC plates were dried in a current of air with help of an air-dryer. Densitometric scanning was performed on Camag TLC scanner III in the absorbance mode at 220 nm. Evaluation was done using linear regression analysis via peak areas.

From this Sub stock solution was prepared by diluting 4 ml of solution to 10 ml to give concentration 200 ng/μl. A 10 μl of the prepared sub stock solution was applied on pre-washed TLC plate, developed in the above mobile phase, dried in air and photometrically analyzed. From the peak area obtained in the chromatogram, the amount of drug was calculated. The analysis was repeated in triplicate and the possibility of excipient interference in the analysis was studied.

The flask was sonicated for 15 min. and added 10 ml of 0.1M sodium hydroxide solution. The content kept for constant stirring for 24 h at room temperature. After specified time, the content was neutralized with 10 ml 0.1 M hydrochloric acid. Then volume was made up to the mark with diluent methanol.

Development of the Optimum Mobile phase: The TLC procedure was optimized with a view to develop a stability indicating assay method to quantify the quetiapine fumarate. Both the pure drug and the degraded products were spotted on the TLC plates and run in different solvent systems. Initially methanol: toluene in varying ratio was tried but degradants products were not resolved. The mobile phase methanol: butanol: water (2:2:1) gave slightly diffused spot with tailing. Substitution of water with ethyl acetate improved the spot characteristics.

Finally the mobile phase consisting of methanol: butanol: ethyl acetate (2:1:1) gave a sharp and well defined symmetrical peak at Rf at 0.76 ± 0.01. Well defined spots were obtained when the chamber was saturated with mobile phase for 30 min at room temperature. The developed analytical procedure can be completed in about 1.5 h, which includes the pre-analysis steps viz. washing of HPTLC plates with methanol and activation at 60 °C (30 min); preparation of mobile phase and saturation of development chamber (30 min). 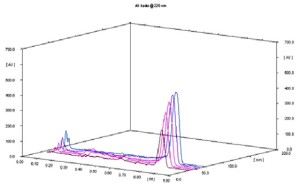 Validation of the method:

Analysis of the prepared Formulation: A single spot at Rf 0.76 was observed in the chromatogram of the drug samples extracted from tablets. There was no interference from the excipients commonly present in the tablet. The drug content was found to be 100.50 % with a % RSD of 0.97 for three replicate determinations.

It may therefore be inferred that degradation of quetiapine fmarate had not occurred in the marketed formulations that were analyzed by this method. The good performance of the method indicated the suitability of this method for routine analysis of quetiapine fumarate in pharmaceutical dosage form.

Stability indicating property: The chromatograms of the samples treated with acid, base, hydrogen peroxide, UV light, dry heat, showed well separated spots of pure quetiapine fumarate as well as some additional peaks at different Rf values. The spots of the degraded products were well resolved from the drug spot. The number of degradation products with their Rf values, content of quetiapine fumarate remained and percentage recovery were calculated and listed in Table 3.

Acid-induced degradation product: Drug recovery at the level of 76.36 % from acid stressed sample after 24 h suggesting that quetiapine fumarate was susceptible towards the acid induced degradation. The chromatograms of the acid degraded sample showed additional peak at Rf value of 0.06, 0.47 and 0.68 were shown in Fig. 2(a). 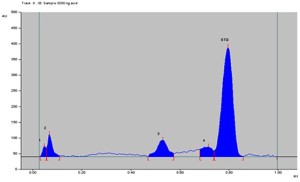 The chromatograms of the base degraded sample showed additional peaks at Rf value of 0.48 and 0.68 were shown in Fig. 2(b). Common peaks at Rf 0.68 indicates that this degradant was common to both acid and base hydrolysis. 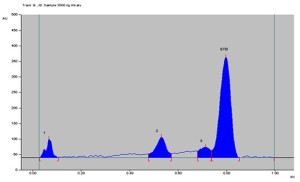 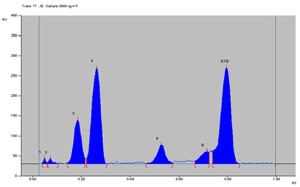 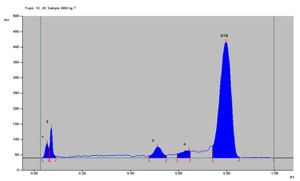 CONCLUSION: The developed HPTLC technique is precise, specific, accurate and stability indicating for the determination of quetiapine fumarate. Statistical analysis proves that the method is reproducible and selective for the analysis of quetiapine fumarate as bulk drug and tablet dosage form. The method can be used to determine the purity of the drug available from various sources by detecting the related impurities. It may further be extended to study the degradation kinetics of quetiapine fumarate and also for its determination in plasma and other biological fluids. As the method separated the drug from its degradation products, it can be employed as a stability indicating one.

ACKNOWLEDGMENTS: The authors are grateful to Veerayatan Institute of Pharmacy, Jakhania and Saurashtra University, Rajkot, India for providing the facilities to carry the experiment as well as Tripada Pharmaceuticals, Ahmedabad, India for providing gift sample of Quetiapine Fumarate.