UFLC gives speed that is ten times faster and separation that is three times better than UPLC. So that’s why the state of being the importance of UFLC is called prominence UFLC, which provides excellent speed and low system backpressure. It is based on high analysis precision & reliability. 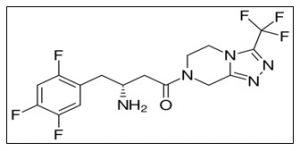 Metformin HCl: Metformin is a biguanide derivative, it decreases the blood glucose levels by decreasing the hepatic glucose production ,decreases the intestinal absorption of glucose and increasing insulin sensitivity by increasing peripheral glucose uptake and utilization.

Drug Samples: Sitagliptin phosphate has a potency of 99.98%, was procured from Dr. Reddy’s laboratory, and Metformin hydrochloride having a potency 99.97% was procure from FDC LMT Verna Goa.

PDA detector was used. The weighing balance was used was unibloc & Ultrasonicator was branson-1800. The UV-Spectrophotometer used were UV-1800 Shimadzu with 1mm matched quartz cells integrated with UV probe 2.3.2 software was used for measuring the absorbance of Sitagliptin Phosphate & Metformin HCl respectively.

Diluent: By performing solubility and literature survey, Sitagliptin phosphate and Metformin hydrochloride are both soluble in water, methanol, and acetonitrile. So that water and mobile phase was used as a binary diluent.

Preparation of Buffer: 2.873 grams of Potassiumdihydrogenortho phosphate was weighed and transferred to 1000ml Millipore water in 1000ml of beaker. The pH was adjusted using triethylamine and filter by using 0.2 µ nylon filter and degassing for 10min.

Preparation of Mobile Phase: Phosphate buffer (pH 7) +MeOH in a ratio 40:60and filter through 0.2µ nylon filter and degassing for 10 min.

Preparation of Working Standard Solution: From standard solution 0.5ml of Sitagliptin Phos-phate and 0.1ml of Metformin HCl solution was pipetted out into 10ml volumetric flask & made up with the diluent to get the concentration of 50µg/ml of Sitagliptin & 10µg/ml Metformin solution.

Preparation of Sample Stock Solution: Twenty tablets were weighed and crushed to a fine powder. Tablet powder equivalent to 50mg sitagliptin phosphate and 500mg of metformin hydrochloride was taken and dissolve in 50ml Millipore water sonicated for 30 min to get 1000µg/ml of Sitagliptin Phosphate and Metformin HCl.

Method Development: The mobile phase was chosen after several trials to reach the optimum stationary/mobile phase matching. The flow rate is 0.6ml / min. The retention times under the conditions described were 2.803 min, 7.027 min for Metformin HCl and Sitagliptin Phosphate, respectively Table 1 and Fig. 3. 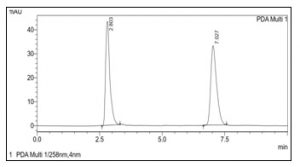 Linearity: The linearity was determined by preparing serial dilutions 6 concentrations of standard stock solutions each in triplicate. Average area was calculated and graph was plotted by taking average peak area vs concentration (μg/ml). The linearity range was found to be 50-100μg/mL for Sitagliptin Phosphate and 10-60μg/mL for Metformin HCl. The correlation coefficient was found to be 0.999 for both drugs.

Sensitivity: Limit of detection and quantification was calculated by using statistical calculations using the formula:

Where, σ = standard deviation. S = slope of the calibration curve.

System Suitability: In order to check the suitability of instrument system suitability was performed by injecting 100 µg/ml & 60 µg/ml of Sitagliptin Phosphate and Metformin HCl solution in six replicates. Chromatograms were obtained and % RSD was calculated (˂ 2).

Precision: Developed method was found to be precise as the results of intraday and interday was found to be within the acceptance 6. replicates of 100µg/ml and 60µg/ml of Sitagliptin Phosphate and Metformin HCl respectively were prepared.

Ruggedness: The ruggedness was performed by a change in instrument and by a change in analyst 6. replicates of 100µg/ml and 60µg/ml of Sitagliptin Phosphate and Metformin HCl respectively were prepared and injected. %RSD was found within limits.

Robustness: It was performed by a slight change in conditions such as flow rate, wavelength, temperature, pH. % RSD was calculated it was less than 2.

Assay: Assay was carried out using the following formula.

Accuracy: Accuracy was performed in three levels 50%, 100%, and 150%. The mean value was calculated. % Recovery was found within limits. 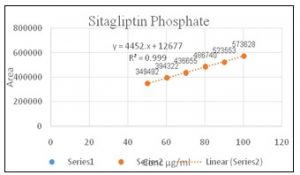 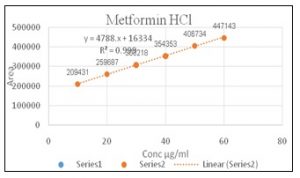 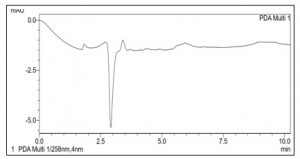 Stability: Stability of drugs was checked by bench and freeze conditions at 24 and 74 h.

Force Degradation: Degradation was carried out in 5 different stress conditions like acidic, basic, oxidation, photolytic, thermal conditions at 60-80 ℃ in the water bath & in reflux condition. The limit of forced degradation is 5-20%. 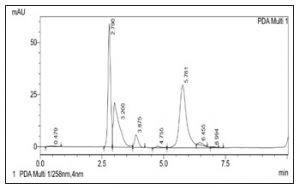 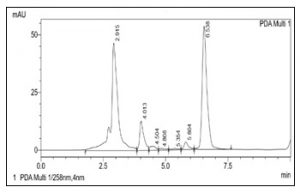 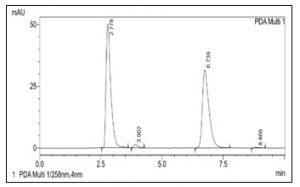 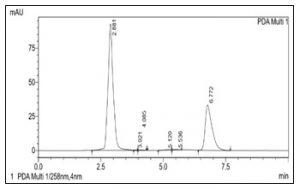 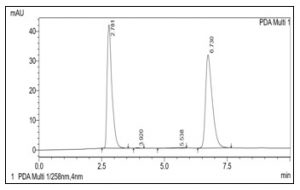 CONCLUSION: In the present investigation, a simple, sensitive, precise and accurate RP-UFLC method for simultaneous estimation of Sitagliptin Phosphate & Metformin HCl was developed and validated as per ICH guideline & stability study displayed that techniques were helpful in monitoring drug stability & conjointly could also be applied for routine analysis in research institutions, in quality control division of pharmaceutical industries. Both the drugs were resolved on Luna 5u C18 (150 × 4.6 mm, 5µm) column using MeOH: Phosphate buffer (pH7) using triethylamine. Flow rate 0.6ml/min. UV detection was performed at 258nm. Assay of resulting formulation shows within limits i. e. 90-110. Hence, it is concluded that developed method are suitable for simultaneous estimation of Sitagliptin Phosphate & Metformin HCl.

CONFLICT OF INTEREST: There is no conflict of interest in the work presented in the manuscript.