STABILITY INDICATING RP-HPLC METHOD DEVELOPMENT AND VALIDATION FOR THE SIMULTANEOUS ESTIMATION OF DARUNAVIR, COBICISTAT, EMTRICITABINE AND TENOFOVIR ALAFENAMIDE IN BULK AND PHARMACEUTICAL FORMULATION

STABILITY INDICATING RP-HPLC METHOD DEVELOPMENT AND VALIDATION FOR THE SIMULTANEOUS ESTIMATION OF DARUNAVIR, COBICISTAT, EMTRICITABINE AND TENOFOVIR ALAFENAMIDE IN BULK AND PHARMACEUTICAL FORMULATION

EMT is 4-amino-5-fluoro-1- [(2R, 5S)-2-(hydroxyl methyl)-1,3-oxathiolan-5-yl]-1, 2dihydropyrimidin-2-one Fig. 1C, an NRTI which competitively inhibits blocks the HIV reverse transcriptase enzyme and blocks the HIV replication thus preventing HIV from multiplying and can reduce the amount of HIV in the body. It is also effective to treat hepatitis virus B infection (HBV) in people with HIV 7. TEN is chemically propan-2-yl (2S)-2-[[[(2R)-1-(6-aminopurin-9-yl) propan-2-yl] oxy methyl phenoxy phosphoryl] amino] propanoate- Fig. 1D, a prodrug of Tenofovir is an NRTI used in the treatment of HBV and often in combinations with other retroviral’s used in the treatment of HIV 6. Combination of DAR, COB, EMT and TEN is a first-ever protease-inhibitor-based single-tablet regimen 8, with DAR being a Protease Inhibitor (PI), COB a pharmacokinetic enhancer of DAR and EMT, TEN belonging to Nucleoside reverse transcriptase inhibitors (NRTI) is recently approved by U.S. Food & Drug Administration 9 and European Medical Agency (EMEA, 2018). As the combination of DAR, COB, EMT, and TEN being recently approved, it has not yet been adopted by any official pharmacopeia. An in-depth literature review has revealed that no analytical method has been published for this combination. The reason for selecting this combination is to provide a validated HPLC method that can separate four different drugs in a single formulation that may be useful in the pharmaceutical industry. 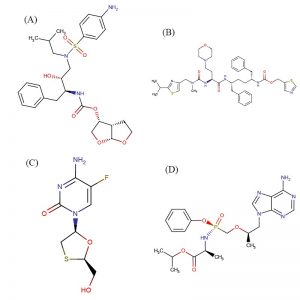 FIG. 1: STRUCTURE OF DARUNAVIR (A), COBICISTAT (B), EMTRICITABINE (C) AND TENOFOVIR ALAFENAMIDE (D)

Chemicals and Reagents: The drug samples of DAR, COB, EMT, and TEN were obtained from Spectrum Pharma Research Solutions, Hyderabad, which is analytically pure. The reagents Water, Methanol, and Acetonitrile are HPLC grade while Orthophosphoric is AR grade was procured from Rankem Pvt. Ltd, Hyderabad, India.

Instrument: The liquid chromatographic separation was carried out on WATERS 2690 autosampler, operating with a binary pump and a rheodyne injector, equipped with Waters 2996 Photodiode Array Detector. Experimental condi-tions were optimised on Agilent C18 (150 x 4.6 mm, 5 m) column. The chromate grams were integrated by EMPOWER software version 2.0. All the standard and sample drugs were weighed on Denver Calibrated electronic balance AY220D. PH meter and Ultrasonicator were purchased from BVK Enterprises India. Proper conditioned Boro-silicate Grade glassware was used for the study.

Selection of Solvent: Solubility studies of drugs were performed, and it was found that all drugs are commonly soluble in Acentonitrile: Water (1:1) and was selected as the solvent for study.

Preparation of Mobile Phase: The mobile phase was prepared by mixing 0.1% OPA (pH 2.4), and Acetonitrile in the ratio of 55:45, and the mixture was sonicated to about 10 min. 0.1% OPA was prepared by diluting 1 ml of orthophosphoric acid to 1000 ml with HPLC grade water.

Preparation of Standard Solution: A standard solution of the four drugs DAR, COB, EMT, and TEN was prepared by accurately weighing 400 mg of Darunavir, 75 mg of Cobicistat, 100 mg of Emtricitabine, and 5 mg of Tenofovir Alafenamide, respectively and transferred into 50 ml volumetric flasks. The volumetric flask was half-filled with solvent and sonicated for 15 min and later made up to the mark with the same solvent. All the aliquots required for the study were prepared from this standard solution.

Preparation of Sample Solution:  In house tablet formulation containing 200 mg DAR, 150 mg COB, 200 mg EMT, and 10 mg TEN were used as a sample. 20 tablets were weighed and average weight was calculated; the weight equivalent to one tablet was transferred to a 100 ml volumetric flask, 50 ml solvent added and sonicated for 25 min and further made up to the mark and finally filtered through HPLC filters.

Chromatographic Condition: Agilent C18 (150 x 4.6 mm, 5 m) column was used for the chromatographic separation at a detection wavelength of 230 nm under 30 ºC temperature. Mobile phase 0.1% OPA: ACN in the ratio 55:45 v/v which was degassed under ultra-sonication, was selected for elution, and the same mixture was used in the preparation of standard and sample solutions.

The flow rate was optimized to 0.75 ml/min, and the injection volume 10 µl was fixed upon the satisfactory results of various system suitability parameters such as retention time, column efficiency, tailing factor, and asymmetry of the peaks.

Specificity: To access the specificity of the method, blank and placebo were injected into the system, and the obtained chromatograms are studied for any responses.

Linearity: The linearity of the method was obtained by preparing suitable aliquots of standard stock solution in different concentrations for DAR (200-1200 µg/ml), COB (37.5-225 µg/ml), EMT (50-300 µg/ml) and TEN (2.5-15 µg/ml). The calibration curve was obtained by plotting the peak area against the respective concentration.

Accuracy: Accuracy of the method was studied at three levels (50%, 100%, 150%) of increasing concentration by adding 1 ml of standard stock solution to 0.5 ml, 1.0 ml, and 1.5 ml sample stock solutions taken individually, injected into system triplicate and % mean recovery was calculated.

Intermediate Precision: The intermediate precision was determined by injecting six standard working solutions and on consecutive days by different personnel. The areas of all the injections were taken, and standard deviations, %RSD was calculated.

LOD & LOQ: Limit of detection (LOD) and Limit of quantification (LOQ) were determined by the calibration curve method. Six sets of Solutions were made from the Standard solution and injected into the system.

For acidic and basic degradation conditions, 1ml of 2N Hydrochloric acid and 1ml of 2N Sodium hydroxide was added respectively and refluxed at 60 °C for 30 min and later neutralized.

For oxidative degradation 1 ml of 20% Hydrogen Peroxide is added and refluxed at 60 °C for 30 min. For thermal degradation, the standard solution was kept at 105 °C for 6 h.

The product obtained after each degradative condition was diluted with a solvent to obtain drug concentration as DAR 800 µg/ml, COB 150 µg/ml, EMT 200 µg/ml, and TEN 10 µg/ml for and the resultant was injected into the HPLC system to assess the stability of sample 10, 14.

Method Development: The standard stock solution was run through a series of mobile phase combinations with interchanging the columns and method parameters from time to time where no proper separation of compounds took place. 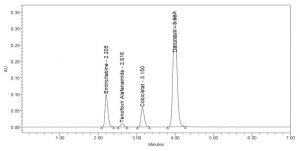 Method Validation: 11-14 System Suitability Parameters System suitability parameters are found within acceptable limits. The summary of the parameters was tabulated in Table 1.

Specificity: Specificity of the method was done by injecting blank and placebo, which showed no interference at retention times of the drugs Table 2. 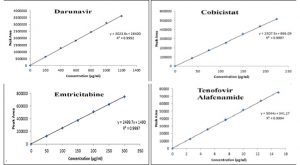 Precision: The results of both method precision and intermediate precision showed satisfactorily, and % RSD limits were less than 2% Table 2.

Accuracy: The accuracy of the method was determined by recovery studies and the Percentage recovery was calculated. The recovery of the drugs was found to be within acceptable limits of 98 - 102% w/v. The Mean recovery of drugs was given in Table 2. 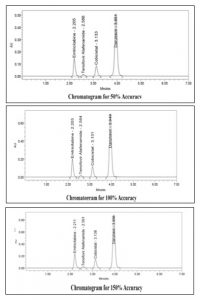 Assay: The assay of in-house formulation was successfully carried out by the proposed method, and the mean assay of the drugs was calculated in Table 2, which are found to be within limits of 90-110%.

LOD and LOQ: The obtained results of LOD & LOQ were presented in Table 2 are found to be within the acceptable limits.

Robustness: The % RSD of different conditions studied for robustness are given in Table 3. The results were obtained satisfactorily as the % RSD is less than 2%.

Forced Degradation Studies: The proposed method was successful in studying the forced degradation of the drugs Fig. 5.

Results show that this method was able to separate the drugs successfully and showed that the combination is sensitive to oxidation degradation where two extra peaks are noticed, and it was stable in all the other degradation conditions. 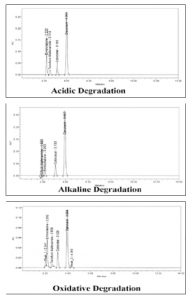 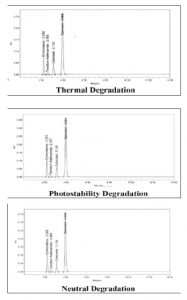 CONCLUSION: In this study, a simple, sensitive, accurate, and precise RP-HPLC method was developed for the simultaneous estimation of DAR, COB, EMT, and TEN in bulk drug and pharmaceutical formulation.

The method was good enough to separate the peaks from the degradation products (produced during forced degradation studies). Hence, the proposed method can be conveniently used for routine quality control analysis in industries.

ACKNOWLEDGEMENT: The author was thankful to Spectrum pharma research solutions, Hyderabad for providing gift samples & dosage form and also Jagan’s College of Pharmacy, Nellore for providing the necessary facilities to carry out the research work.

CONFLICTS OF INTEREST: The author declares there were no conflicts of interest.