ABSTRACT: Siddha system of medicine is a traditional medicinal system being followed mainly in South India. It is better known as one among the AYUSH medicinal system. The present study aims to standardize the Siddha poly-herbal formulation Panchabakiya chooranam (PBC), which is mentioned in the Siddha classical text Anuboga vaidya Brahma ragasyam indicated for stomach burn, burning sensation in anus and diarrhea. Accordingly, PBC was studied through Inductively Coupled Plasma Optical Emission Spectrometric analysis (ICP-OES) and Fourier Transform Infrared Spectroscopy (FTIR) techniques to identify the metals and functional groups present in it. Results showed that the sample contains elements such as Calcium, Iron, Sodium, Potassium, and Phosphorous. Among the detected elements Phosphorus was present in a maximum concentration, and iron was in lowest concentration. Moreover, the toxic metals namely, Mercury, Arsenic, Cadmium, Nickel, and Lead were in Below Detectable Level, which ensures that the drug is safe to consume. Besides, functional groups such as Alcohols, alkanes, amides are identified using IR spectrum.

INTRODUCTION: Medicinal plants are used since the evolution of mankind for food and treating various diseases. Our ancestors lived a healthy life due to their attachment with nature and nature products. After a dip in their importance among the people in the recent past, they are recouping its significance in recent few years. Numerous herbal-based drugs are being developed by local, multi-national drug companies, local traditional healers, etc. As there is a global resurgence in demand for traditional drugs, medicinal herbs are becoming endangerous, and there is a possibility of lack of quality in those drugs.

Thus, there is an exigency to address the quality of the traditional drugs to ensure patients safety and to preserve its efficiency. In this way, the herbal drug Panchabakiya chooranam, a traditional Siddha polyherbal formulation is standardized by using FTIR and ICP-OES techniques. Inductively coupled plasma/optical emission spectrometry (ICP/OES) is a powerful tool for the determination of metals in a variety of different sample matrices. The technique is based upon the spontaneous emission of photons from atoms and ions that have been excited in an RF discharge 1.

Infrared spectroscopy probes the molecular vibrations. Functional groups can be associated with characteristic infrared absorption bands, which correspond to the fundamental vibrations of the functional groups (Colthup et al., 1975; Grifﬁth and de Haseth 1986) 2. The selective absorption (or emission) of infrared radiation arises in the mutual vibrations of the atoms constituting the molecules.

A molecule does not absorb radiation of all wavelengths however selects only a few narrow wavelength intervals known as absorption bands. The resulting absorption pattern is characteristic of the molecule which reflects elemental interactions and chemical diversity in sample 3.

Details Regarding Sample: The drug Panchabakiya chooranam is mentioned in Siddha literature Anuboga vaidhya Brahma ragasyam 4. The indication of the sample drug as per Siddha literature is Stomach burn, burning sensation in anus and diarrhea.

Drug Collection and Authentication: All the ingredients of the drug are bought in Ramasamy Chetty country drug shop, Parrys, Chennai and authenticated at Department of Botany, Government Siddha Medical College, Chennai.

The mixture was then pressed under hydraulic press using a die to yield a transparent disc (measure about 13 mm diameter and 0.3 mm in thickness) through which the beam of spectrometer passed. The analysis was done using BRUKER RFS 27: Standalone FT-Raman Spectrometer. 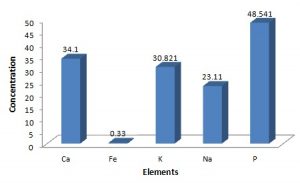 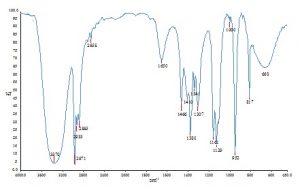 DISCUSSION: ICP-OES results revealed that heavy metals like Mercury, Arsenic, Cadmium, Nickel, and Lead are present Below Detectable Level (BDL) which ensures the safety of the drug. The elements such as Calcium, iron, sodium, potassium, and phosphorus are present. Calcium is a component of Calcium carbonate, and Sodium is a part of Sodium bicarbonate. Calcium carbonate and Sodium bicarbonate are antacids 5 which correlates with the indications of the drug. Among all the elements, Phosphorus was present in maximum concentration followed by Calcium, Potassium, and Sodium. The least concentrated element in the sample was Iron.

CONCLUSION: Inductively Coupled Plasma Optic Emission Spectroscopy (ICP-OES) results show that the sample contains heavy metals such as Calcium, Iron, Sodium, Potassium, and Phosphorous. Phosphorus and Iron were the highest and lowest concentrated elements in the sample respectively. As per FTIR analysist bonds on the surface of Panchabakiya chooranam samples gave various peaks representing the presence of many functional groups such as Alcohols, alkanes, amides. Present work can be considered as the first step towards the identification of heavy metals and functional groups.

The present study is only a preliminary analysis, and exact nature of different peaks given by the sample along with the characterization is to be studied.