INTRODUCTION: Standardization of herbal formulations is essential for the assessment of quality, purity, and efficacy of drugs. In recent years, plant-derived products are increasingly being sold out as medicinal products, nutraceuticals, and cosmetics and are available in health food shops and pharmacies or also as drugs prescribed in the non-allopathic systems 1.

The quality evaluation of herbal formulations is of principal importance to justify their acceptability in the present world 2. One of the major problems faced by the herbal industry is the unavailability of strict quality control profiles for herbal products and their formulations.

Regulatory bodies have laid down the standardization procedures and specifications for Unani preparations 3, 4. There is a need to explore the medicinally important plants, and this can be achieved only if the herbal products are analyzed and evaluated by using sophisticated modern techniques of standardization. The World Health Organization (WHO) has cherished the importance of medicinal plants for public health care in developing nations and has formulated guidelines to help the member states in their efforts to formulate national policies on non-conventional medicine and to study their probable usefulness including evaluation, safety, and efficacy 5. It has become extremely important to make an effort towards standardization of the herbal formulation to be used as medicine.

Procurement of Raw Drugs: 6 Ingredients of Safoof-e-Musakkin was procured from the pharmacy of NIUM Kottigepalya Bangalore, Karnataka, India, and authentic shop. The identification of these drugs was done by the experts at National Institute of Unani Medicine Kottigepalya, Bangalore. The detail of the ingredients of Safoof-e-Musakkin is depicted in Table 1.

Preparation of Formulation: 6 All the drugs were first cleaned and dried in the shade and powdered by passing through sieve # no. 80. The formulation Fig. 1 was prepared as per the method described in the National Formulary of Unani Medicines. 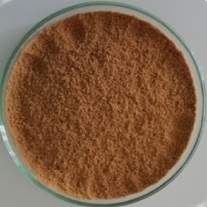 Organoleptic Evaluation: 4 The Organoleptic evaluations refer to the evaluation of the Safoof-e-Musakkin formulation by color, odor, taste, appearance, particle size and texture.

Drawing boundary along the circumference of the pile and taking the average of six diameters determined the diameter of the pile. These values of height and diameter were then substituted in the following equation:

Carr’s Index: Carr’s index has been used as an indirect method of quantifying powder flowability from bulk density; this method was developed by Carr. The percentage compressibility of a powder is a direct measure of the potential powder arch or bridge strength and stability and is calculated according to the following equation.

Hausner’s Ratio: Hausner ratio has also been used as an indirect method of quantifying powder ﬂow ability from bulk density.

Where Db = Bulk density and Dt =Tapped density. All the experiments were repeated in triplicate.

Physico-chemical Evaluation: The Physico-chemical evaluation of prepared Safoof-e-Musakkin was done by testing loss of weight on drying at 105ºC, total ash, acid insoluble ash, water soluble ash, pH of 1% and pH of 10% solution and extractive values.

Loss on drying at 105 ºC: 10 An accurately weighed 3 g of Safoof-e-Musakkin was taken in a petri dish. The crude drug was heated at 105 ºC in an oven till a constant weight and percentage moisture content of the sample was calculated concerning the weighed Safoof-e-Musakkin sample.

Ash Values: Determination of total ash, acid insoluble ash, and water soluble ash is done as per protocol for testing of ASU drug and UPI 4, 10.

Determination of pH: 11 1% and 10% solution of Safoof-e-Musakkin was prepared in distilled water (w/v), and pH was determined by using digital pH meter.

Extractive Values: 10 Water soluble extractives: Five grams of Safoof-e-Musakkin was macerated with 100 ml of water in closed conical ﬂask for 24 h, shaken frequently for the first 6 h and allowed to stand for 18 h. This was filtered through filter paper. Twenty-five milliliters of the filtrate was evaporated to dryness in the petri dish, dried at 105 °C, and weighed. Percentage of water-soluble extractive concerning air-dried material was calculated.

Alcohol Soluble Extractives: Five grams of Safoof-e-Musakkin was macerated with 100 ml of 70% ethanol in a closed conical ﬂask for 24 h, shaken frequently during the first 6 h, and allowed to stand for 18 h. This was filtered rapidly taking precaution against loss of ethanol. Twenty-five milliliters of the filtrate was evaporated to dryness in a petri-dish, dried at 105 °C, and weighed. Percentage of alcohol-soluble extractive was calculated concerning the air-dried drug.

Successive Extractive Value: The coarse powder of Safoof-e-Musakkin was extracted successively using soxhlet apparatus with different solvent, in increasing order of polarity, petroleum ether → benzene → chloroform-ethanol. 10 g powdered drug was taken and subjected to successive extraction with each solvent for 6 h. After that, the extracts were filtered first by using filter paper (Whatman no. 1) and dried on a water bath. The extractive values were determined concerning the weight of the drug taken (w/w). The procedure was repeated 3 times to calculate mean extractive values.

Non Successive Extractive Value: The coarse powder of Safoof-e-Musakkin was extracted separately in different solvent (water, ethyl alcohol, and petroleum ether) using Soxhlet apparatus. 10 g powdered drug was taken and subjected to separate extraction with each solvent. The extracts were filtered first by using filter paper (Whatman no. 1) and evaporate on the water bath. Extractive values were determined concerning a drug is taken (w/w).

HPTLC Fingerprinting Analysis: The weighed quantity (5 g) of Safoof-e-Musakkin was extracted in a Soxhlet apparatus for 6 h using 100 ml of solvent (methanol) at a controlled temperature. HPTLC was performed on 20 cm × 10 cm aluminum-backed plates coated with silica gel 60F254 (Merck, Mumbai, India). Standard solution of sample solution was applied to the plates as bands by use of a Camag (Muttenz, Switzerland) Linomat V sample applicator equipped with a 100 μl Hamilton (USA) syringe.

Ascending development to a distance of 80 mm was performed at room temperature (28 ± 2 °C) in two different mobile phases separately viz. n-Butanol: Acetic acid: water (5:1:4) and Toluene: Ethyl acetate: Formic acid (5:4:1) (v/v), in a Camag glass twin-trough chamber previously saturated with mobile phase vapour for 20 min. After development, the plates were dried and then scanned at 254 nm and 366 nm with a Camag TLC Scanner with WINCAT software, using the deuterium lamp 13, 14.

TABLE 6: Rf VALUE, NO. OF PEAKS, PEAK AREA, AND HEIGHT OF SAFOOF-E-MUSAKKIN IN N-BUTANOL: ACETIC ACID: WATER AT 254nm

TABLE 7: Rf VALUE, NO. OF PEAKS, PEAK AREA, AND HEIGHT OF SAFOOF-E-MUSAKKIN IN N-BUTANOL: ACETIC ACID: WATER AT 366 nm

TABLE 8: Rf VALUE, NO. OF PEAKS, PEAK AREA, AND HEIGHT OF SAFOOF-E-MUSAKKIN IN TOLUENE: ETHYL ACETATE: FORMIC ACID AT 254 nm

TABLE 9: Rf VALUE, NO. OF PEAKS, PEAK AREA, AND HEIGHT OF SAFOOF-E-MUSAKKIN IN TOLUENE: ETHYL ACETATE: FORMIC ACID AT 366 nm

DISCUSSION: Finished product of Safoof-e-Musakkin was brown as per color chart (No. PMS 1385 of Panton color chart), 15 bitter in taste, aromatic odor and without any clumping and aggregation. Organoleptic characteristic of the formulation was documented. The mean values of bulk density, tapped density, angle of repose, Hausner’s ratio and compressibility index were 0.2702 ± 0.0033, 0.3773 ± 0.0026, 38.83ᶿ ± 0.86, 1.396 ± 0.007 and 28.378 ± 0.325 respectively. Hausner’s ratio and compressibility index are the simple and popular method to determine the flow characteristics of the powder. The flow characteristics of powder depending on the size, shape and size distribution of particles 16. The compressibility index of Safoof-e-Musakkin lies between 23-35 according to the scale of flowability; it shows the SM has a poor flow character. The Hausner’s ratio of Safoof-e-Musakkin lies in between 1.25-1.5, it indicates moderate flowability 17, 18. Table 2 Angle of repose displayed Passable flow property 18. Powder characterization parameter was set in. The mean percentage of loss of weight on drying of Safoof-e-Musakkin was 7.75 ± 0.058.

Table 3 It is mentioned that the water content in plant drugs can vary between 8% and 14%. The presence of an excessive amount of moisture in plant drugs causes hydrolysis of constituents, growth of bacteria and fungi and biochemical reactions. The pharmacopoeial monographs compulsorily limit the water content, especially in drugs that have hygroscopic nature, or in which the excessive amounts of water causes deterioration of products 19. As finished Safoof-e-Musakkin contains less amount of moisture, it can be expected that it will be stable/safe for a longer time. The ash value is an important parameter in the quality control of herbal drugs. A high ash value is indicative of contamination, substitution, adulteration, or carelessness in preparing the drug or drug combinations for marketing. The total ash of Safoof-e-Musakkin was found to be 5.87 ± 0.09% w/w. These values were found to be reasonably low indicating low contamination. Water-soluble ash is the part of the total ash content, which is soluble in water. It is a good indicator of either previous extraction of water-soluble salts in the drug or incorrect preparation. Thus, it is the difference in weight between the total ash and the residue obtained after treatment of total ash with water.

Table 4 Extractive value of a drug in a definite solvent is an index for checking the purity of a drug. Amount of the extract of a drug in a particular solvent is often an appropriate measuring tool for certain constituent in the drug 23. High value was noted in petroleum ether, alcohol, and aqueous extract because of safoof ingredient such as Rauwolfia serpentina Benth. Ex kurz contains many important alkaloids, such as reserpine, serpentinine, and ajmalicine; 24 Coriandrum sativum Linn. contains Essential oil (coriandroal) 25 and Piper nigrum Linn. contains essential oil 25. Organic constituent’s viz. alkaloids, glycosides, tannins, flavonoids, sugars, saponins, phenols, proteins, steroids, etc. were qualitatively estimated Table 7.

Table 8 Area percentage of peak no. 3 of Safoof-e-Musakkin analyzed under 366nm in Toluene: Ethyl acetate: Formic acid (5:4:1) was highest (80.57%). Table 9 Further studies can also be done by the help of standards and quantitative estimation and identification of the ingredients. Present HPTLC fingerprinting data can help in the authentication and identification of Safoof-e-Musakkin in the performed solvent system and extract.

CONCLUSION: The prepared powder formulation Safoof-e-Musakkin was screened for various standardization parameters as per Unani pharmacopoeial standards and its physicochemical standards including HPTLC was set in. The research outcome of the standardization parameters may be used as a standard monograph for identification and further evaluation or future research work.

ACKNOWLEDGEMENT: The authors would like to express their thanks to Prof. M.A Siddiqui, Director, National Institute of Unani Medicine (NIUM) Bangalore, for providing all the essential assistant and motivation to work and Dr. Nagraaj, HOD, Department of Pharmaceutical Analysis PES college of Pharmacy Bangalore for HPTLC work.