STATUS OF GLUCOSE-6- PHOSPHATE DEHYDROGENASE – A RISK FACTOR FOR PREECLAMPSIA

STATUS OF GLUCOSE-6- PHOSPHATE DEHYDROGENASE - A RISK FACTOR FOR PREECLAMPSIA

ABSTRACT: Background and Objectives: Glucose 6-Phosphate Dehydrogenase (G-6PD) is a ubiquitous enzyme playing a key role in the metabolism of glucose. Reduced activity of G-6PD is one of the most prevalent and genetically determined hereditary defects of the human being. Recently, it has been suggested that reduced G–6PD activity in pre-eclampsia may act as a contributory factor for the development of this complicated pregnancy. Material and Methods: The material for the present study comprised of 50 pregnant females at or after 20 weeks of pregnancy without complications and 50 pregnant women having blood pressure ³ 140/90 mmHg on at least two occasions ³  4 h apart after 20 weeks of gestation. G-6PD Activity in RBCs was measured.  Results: It was found that reduced Glucose-6-phosphate dehydrogenase (G6PD) enzyme activity may be a contributory factor for the development of preeclampsia in pregnancy. Conclusion: Reduced G6PD activity may be one of the causative factors for the development of preeclampsia, so, routine screening of erythrocyte G6PD activity during the antenatal period must be done.

INTRODUCTION: Glucose 6-Phosphate dehydrogenase (G-6PD) is a ubiquitous enzyme playing a key role in the metabolism of glucose. This enzyme is essential for protecting erythrocytes from oxidative stress. Reduced activity of G-6PD is one of the most prevalent and genetically determined hereditary defects of a human being. It is estimated that over 400 million people have reduced G-6PD activity, which makes this condition the most common human enzymopathy 1.

Pre-eclampsia and eclampsia both are the main components of pregnancy-induced hypertension, which is a major problem in third world countries and is also an important cause of fetal and maternal morbidity and mortality.

Pregnancy-induced hypertension is characterized by the development of high blood pressure during pregnancy in previously normotensive women. It commonly appears in very young and elderly primigravida and in those who have large volumes of placental tissue in association with diabetes mellitus, Rh-disease, hydatidiform mole and multiple gestations. Recently it has been suggested that reduced G–6PD activity in pre-eclampsia may act as a contributory factor for the development of this complicated pregnancy 2.

Keeping the above in mind, the present study was designed to measure the erythrocyte G-6PD activity in pregnant women with pre-eclampsia and in a normal pregnant woman to observe this enzyme activity.

MATERIAL AND METHODS: The material for the present study comprised of 50 pregnant women in the age group of 18 - 35 years from the OPD and IPD of the Department of Obstetrics and Gynaecology, Assam Medical College and Hospital, Dibrugarh. The patients were subjected to detailed clinical evaluation and investigations.

Exclusion Criteria: Patients with a previous history of hypertension, diabetes mellitus, history of high-grade fever and smoking were excluded from this study.

Selection of Control: The control group was selected from the Department of Obstetrics & Gynaecology, Assam Medical College & Hospital, Dibrugarh. They belonged to the same age group with study group (cases) at or after 20 weeks of pregnancy without complications. G-6PD Activity in RBCs was measured by kinetic method 3, 4, 5. 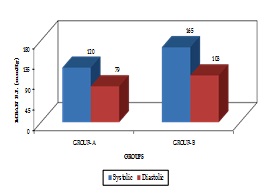 The p-value for systolic as well as diastolic B.P was < 0.0001 when controls were compared to cases, which is conventionally considered to be statistically extremely significant. 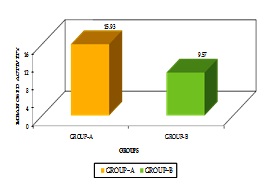 Table 2 and Fig. 2 compare the erythrocyte G6PD activity in normal pregnancy and patients with preeclampsia.

The p-value when the control group was compared to cases was < 0.001, which is considered statistically highly significant.

DISCUSSION: Pregnancy is a condition where progressive physiological, as well as anatomical changes, occur which are not confined to the genital organs only but also all other systems of the body 6.

Pre-eclampsia is a disorder associated with pregnancy, characterized by hypertension and proteinuria with or without edema after the 20th weeks of pregnancy. It is one of the common complications of pregnancy 6. In India, the incidence is higher due to low socioeconomic condition and pregnancy in a young age group. Recently, researchers found that reduced Glucose-6-phosphate dehydrogenase (G6PD) enzyme activity may be a contributory factor for the development of preeclampsia in pregnancy.

According to the definition of preeclampsia, the blood pressure level must be more than or equal to 140/90 mmHg for the first time during pregnancy 7. In the present study, the mean systolic and diastolic blood pressure in preeclamptic group was 165 mmHg and 103 mmHg respectively, which are well above the minimum criteria for preeclampsia. The p-value was < 0.0001, which is statistically extremely significant.

N.H. Abdulhadi et al., in 2003 observed that G6PD deficiency in pregnant women can be a possible contributory factor in the development of preeclampsia 8.

It has been suggested that in women with reduced G6PD activity, placental lipid peroxidation and decrease synthesis of the placental hormone by syncytiotrophoblast due to oxidative stress may lead to the development of pre-eclampsia.

Also, in 2009, Kazi Salma Binte Faruky et al. suggested that G6PD deficiency in eclampsia may act as a contributory factor for the development of this complicated pregnancy 2. Further, Omid R. Zekavat, Maryam Escandary et al., in 2010 suggested that the test for G6PD deficiency can be used as a screening tool for screening preeclampsia 9. It has been observed that the syncytiotrophoblast cells, which have been derived from trophoblast in the women with preeclampsia, the activity of the glutathione peroxidase are less than the normal range.

The glutathione peroxidase enzyme uses the reduced glutathione as the initial elements (substrate). It has been observed that the sensitivity of the syncytiotrophoblast membrane is increased due to the oxidant stresses in women with preeclampsia. Such an increase in the sensitivities is related to the decrease in antioxidant systems and or to the abnormality of the lipids components of the membrane.

Considering the study being a preliminary one, the period of the study being limited, the observations recorded here cannot be claimed to give a clear picture of the relationship of G6PD activity and pre-eclampsia.

However, there remains a genuine scope for a perspective larger study, which might throw more light to peer more deeply into the relationship.