ABSTRACTTuberculosis (TB) is a growing international health concern and it is estimated that a third of the world's population is currently infected with TB. The increasing prevalence of multidrug-resistant (MDR)-TB has greatly increased difficulties in its treatment and control. Therefore, the present study was perceived to check the status of tuberculosis at Kanpur, one of the largest city of Uttar Pradesh and oldest industrial townships of North India. Study was also aimed to understand the expectation and mindset of community/patients regarding the services of a pharmacist in the maintenance or restoration of health. The study was conducted on the TB patients attending different outpatient and or inpatient department of local and government hospital, clinics, in Kanpur city and necessary information had been collected through questionnaire by making couple of visit and follow-up counseling. It was amazing to know through the study that knowledge and awareness about such common and chronic diseases was either very poor or there was none implementation for prevention and control. The healthcare services of pharmacist were not only accepted but also appreciated by majority of patients. It has also been revealed that there is need to invest more in education, policies and science to ensure better and safer services in particular with new and effective antimycobacterials

INTRODUCTION: Tuberculosis (TB) ranks as the second leading cause of death from an infectious disease worldwide, after the HIV. According to WHO update to 2012 report, there were almost 9 million new cases in 2011 and 1.4 million TB deaths globally 1. While Asia bears the largest burden of the disease and India is ranked 1st, with nearly 40% of the Indian population, followed by China, South Africa and Nigeria 2, 3.

In particular, the increasing prevalence of MDR-TB has greatly contributed to the increased difficulties in the control of TB. India had an estimated 63,000 cases of notified multi-drug resistant tuberculosis (MDR-TB) which is highest in the South East Asia region 4.

The present study was perceived to check the status of tuberculosis at Kanpur city which is one of the largest city of U. P. and oldest industrial townships of North India. Kanpur is also one of the favorable destination of education in India as it is home to several globally recognized institutions such as IIT Kanpur, Harcourt Butler Technological Institute (HBTI), GSVM Medical College, CSA Agriculture University, C.S.J.M. University.

The transmission of tuberculosis occurs when an infectious person coughs, sneezes, laughs, or sings; through the airborne particles that contain Mycobacterium tuberculosis, called droplet nuclei.

One sputum positive case can infect 10 - 15 healthy individuals in one year 5. 0.5 million people in India die from TB every year, more than 1000 every day (i.e. two deaths occur every three minutes) 6. 85% of all TB cases are pulmonary which occurs in lungs while remaining cases of TB are extra pulmonary which may occur at larynx, lymph nodes, brain and spine, kidneys, bones and joints. The miliary TB occurs when tubercle bacilli enter the bloodstream and are carried to all parts of the body.

Not everyone exposed to Mycobacterium get infected with TB, about 10% of infected persons will develop TB disease at some point in their lives 7.

Problems of MDR-TB The prevalence of MDR-TB, defined as resistance to isoniazid and rifampicin with or without resistance to other drugs. Resistance of M. tuberculosis to anti-TB drugs is man-made as wild isolates of M. tuberculosis that have never been exposed to anti-TB drugs are virtually never clinically resistant. The incidence of drug resistance has increased since the first drug treatment for TB was introduced in 1943. The emergence of MDR-TB followed the widespread use of rifampicin since the 1970s 8.

MATERIAL AND METHODS: The study was conducted during the prime season of year 2011 at Kanpur city (U.P.) India. A total of 85 randomize screened tuberculosis patients, who gave written consent to participate in the study, were enrolled from three different but important TB Centre of Kanpur, i.e. Chaudhary Ehsan Kareem Hospital, Murari Chest Hospital and Chest Care Centre.

The age of patients varied from 10 plus to 60 plus and included both male and female populations. The questionnaire is designed and developed in such a way so that it could be helpful in assessing control/ eradication; awareness; implementation of awareness of the disease. A follow-up counseling was also arranged.

The study was also focused to assess the patient’s readiness and advising them strongly by a personalize, clear & compelling message through the budding pharmacists.

RESULTS: The observations under the study are given in the following figures 1-7; 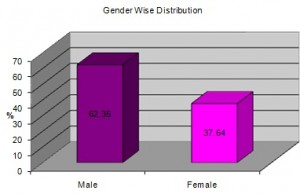 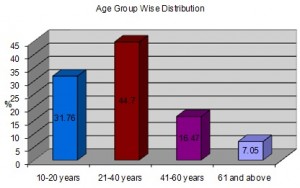 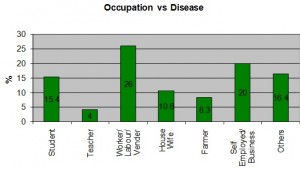 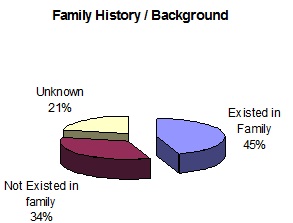 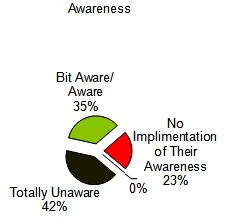 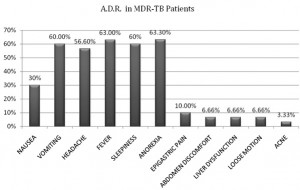 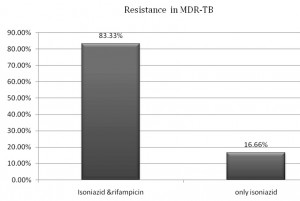 DISCUSSION & CONCLUSION: Higher male ratio in the present study as well as in TB India 2012 report (two thirds are male) may be indicative of outdoor vs. indoor or ignorance of female health as TB disease is more common among the poorest and marginalized sections of the community. Almost 75% of patients are found to be aged between the ages of 10 and 40 years i.e. in their most productive years of life. When the occupation and awareness were analyzed, it was amazing to know that now the disease not restricted to poor or uneducated people and knowledge or awareness about such common and chronic diseases was either very poor or there was none implementation for its prevention and control.

TB is a curable disease only if patients are given a complete and uninterrupted course of drug therapy and if they take these medications as prescribed 9. Pharmacists have an important role to play in the management and prevention of TB as a part of multi-disciplinary team, especially in aspects related to improving availability and accessibility of drug treatment; improving adherence to therapy and educating patients on the treatment and on the disease 10, 11.

Pharmacists constitute an important and essential part of the health work-force and in many countries; pharmacists are the frontline health-care providers and often a first point of contact for people with symptoms of TB. Public health and pharmacy have been closely associated for millennia 12, as among the health professionals, pharmacists are perhaps the most accessible to the public! To maintain this unique position and identity the quality education, quality learning (especially about the public health system) and quality services are of prime importance for the acceptance in clinics. Study and evidence also suggest that there are very small numbers of pharmacist are involved in clinics and community.

Most TB patients complete their TB treatment without any significant adverse effects. A pharmacist can assist patients by informing them about these common adverse effects; this will help prevent patients stopping their medication abruptly as a result of adverse effects. As pharmacists interact with a large number of people on a daily basis and are therefore in an ideal position to distribute educational material to the public, not only on the treatment of TB but also on preventative measures. In this regard, we must ensure that pharmacy graduates are competent to: promote the availability of effective health and disease prevention services and health policy through the ability to apply population-specific data, quality improvement strategies, informatics, and research processes to identify and solve public health problems and to help develop health policy. So, increasing the participation of pharmacists in all levels of the public health system is fundamental to achieving substantial improvement in the health status of our population.

The current drug regimen is more than 4 decade old and takes 6-9 months to administer. Because of the emergence of drug resistant strains i.e., the increasing rate of MDR-TB and the high rate of a co-infection with HIV, the development of potent new anti-TB drugs without cross-resistance with known antimycobacterial agents is also urgently needed.

In several countries, national TB programmes have made significant progress in involving diverse public, private, voluntary and corporate health-care providers in TB care and control. Need of such type active collaboration and cooperation with civil society partners has also been accepted by honorable Minister of Health & Family Welfare Government of India, to achieve the ambitious targets of Universal Access to Quality TB Care in India, in the RNTCP annual status report 2012, and recently, a historic memorandum of understanding is signed between the Central TB division, Government of India and the Indian Pharmaceutical Association (IPA), the AIOCD, the Pharmacy Council of India (PCI) and the SEAR Pharm forum on 27th April 2012 with the main objective of strengthening the Revised National TB Programme through engaging pharmacists in the task of providing TB care and control in India which could be seems to be result of such efforts and interactions made at national and international level 13, 14. Hence, there is a great need to adopt and develop gold standards in pharma education 15. In this way only the ambitious targets of Universal Access to Quality TB Care in India and all over the world can be achieved.