Hydrogels are the 3 dimensional cross linked polymeric networks which absorb the water 10-20 times of its molecular weight. Hydrogels are sensitive to different environmental stimuli like pH, temperature, ion, electric signals, light, pressure, antigen specific, enzyme sensitive, and glucose levels. When the environment is get change they get swell, and swelling is the most important characteristics for release of drug through hydrogel devices, and release by either diffusion or swelling or chemically controlled. These stimuli sensitive hydrogel used in delivery of drug through various routs like oral, ophthalmic parenteral drug, nasal TDDS, and also in novel drug delivery like in nanoparticles. Now a day’s stimuli sensitive hydrogels are also used in administration of DNA. Most widely stimuli sensitive hydrogels used are pH and temperature sensitive hydrogels because in body wide pH range available so it is used for targeted drug delivery.  Hydrogels that are responsive to specific molecules, such as glucose or antigens, can be used as biosensors as well as drug delivery systems.

INTRODUCTION: Hydrogels are a network of hydrophilic polymers that can swell in water and hold a large amount of water while maintaining the structure 1. Approaches of dosage form designs require a carrier which should be biocompatible and biosensitive like hydrogels 2. A three-dimensional network was formed by cross linking polymer chains1. The cross- linking renders these structures insoluble in water due to anionic interaction and hydrogen–bonding. These structures imbibe water or biological fluids in large amount at least 10-20 times of their molecular weight, thus become swollen 2. Drug release in response to external stimuli, and are most investigated. Hydrogels having such ‘sensor’ properties can undergo reversible volume phase transitions or sol-gel phase transitions upon changes in the environmental condition such stimuli and response are shown in fig. 1.

These properties of polymers play important role in drug delivery 3. Hydrogel-based drug delivery devices have become a major area of research interest Hydrogels can protect drugs from hostile environments, e.g. the presence of enzymes and low pH in the stomach. Their porosity permits loading of drugs into the gel matrix and subsequent drug release at a pre-designed rate 3.

Preparation of Hydrogels: Block diagram for preparations of hydrogels shown in fig. 2.

Remarkable increases on the tensile modulus and tensile strength were observed for the nanocomposite hydrogels, e.g. 228 and 131% increases were achieved in tensile modulus and tensile strength by incorporating 15% wt of kaolinite into PVA hydrogel, respectively. The DMTA test was performed in the compression mode, using disc-shaped samples with a diameter of 11 mm and a thickness of 5 mm. It was shown that the storage modulus of PVA hydrogel increases by increasing the kaolinite content. 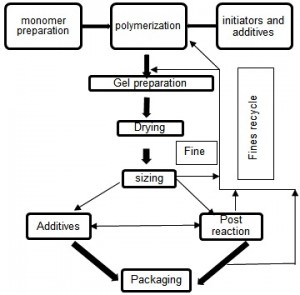 Morphological characterization: Hydrogels were characterized for morphology which analyzed by equipment like stereomicroscope.

Where, w1 =weight after swelling; w2= weight before swelling

The stimuli that induce various responses of the Hydrogel Systems are as follows:

At pH 5, the pore size of the acetal cross-linked hydrogels increases leading to release of protein and at neutral pH, the acetal groups remain intact as cross linkers and protein do not diffuse out easily. Eg: polymethylmethacrylate (PMMA), poly-acrylamide (PAAm), polyacrylic acid (PAA), poly dimethylaminoethylmethacrylate (PDEAEMA) and polyethylene glycol as shown in fig. 4 2. 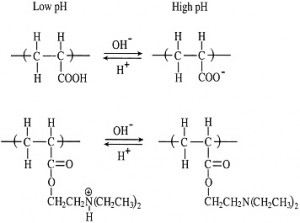 FIG. 4: STRUCTURES OF SOME TEMPERATURE-SENSITIVE POLYMERS 1

A positive temperature-sensitive hydrogel has an upper critical solution temperature (UCST), they contracts upon cooling below the UCST. Eg: poly (acrylic acid) (PAA), polyacrylamide (PAAm) Polymers increase their water-solubility as the temperature increases.

Polymers with LCST decrease their water-solubility as the temperature increases due to shrinking. This behavior is known as inverse (or negative) temperature-dependence. These hydrogels are made of polymer chains that either possess moderately hydrophobic groups or contain mixture of hydrophilic and hydrophobic segments 1, 2.

Gellan gum commercially available as Gelrite is an anionic polysaccharide that undergoes in situ gelling in the presence of mono- and divalent cations, including Ca2+, Mg2+, K+ and Na+. Gelation of the low methoxy pectins can be caused by divalent cations, especially Ca2+.Likewise, alginic acid undergoes gelation in presence of divalent/polyvalent cations e.g. Ca2+ due to the interaction with gulcouronic acid blocks in alginate chains 12. Nonionic poly(N-iso propylacryl amide) hydrogel, however, showed a sharp volume phase transition at a critical concentration of sodium chloride in aqueous solution. The phase transition behavior of positively charged poly (diallyldimethyl ammonium chloride) hydrogels is sensitive to the concentration of sodium iodide 1. 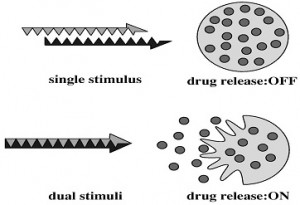 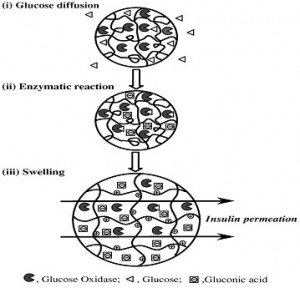 FIG. 6: SCHEMATIC REPRESENTATION OF THE GLUCOSE-SENSITIVE HYDROGEL MEMBRANE CONSISTING OF A POLY (AMINE) AND GLUCOSE-OXIDASE-LOADED MEMBRANE 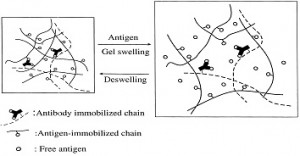 FIG. 7: SWELLING OF AN ANTIGEN–ANTIBODY SEMI-IPN HYDROGEL IN RESPONSE TO FREE ANTIGEN 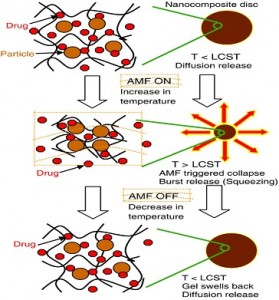 FIG. 8: SCHEMATIC SHOWING THE EFFECT OF ON–OFF CYCLES OF AMF TO THE MAGNETIC NANOCOMPOSITES OF NIPAAM. IT SHOWS THE AMF TRIGGERED COLLAPSE AND RESULTANT BURST RELEASE DUE TO SQUEEZING EFFECT 16

For reservoir system drug depot is surrounded by a polymeric hydrogel membrane. Fick’s first law describes drug release through the membrane. Where Flux of the drug/ drug corresponding to the mass average velocity of the system 2, 7.

For matrix system (drug uniformly dispersed throughout the matrix), unsteady state drug diffusion in a one dimensional slap- shaped matrix may be described using Fick’s second law of diffusion.

Drug diffusion coefficient is assumed to be constant. Other assumptions are sink condition and a thin planar geometry where the release through the edges is neglected. Drug diffusion coefficient is a function of drug concentration except in very dilute solutions. Diffusivities of encapsulated molecules depend on the degree of swelling and cross linking density of the gels for hydrogel devices. Diffusion coefficient used to describe drug release is sensitive to environmental changes or degradation of the polymer network and varies over the time scale of release 2, 7.

Where, δ is the thickness of the hydrogel and K is the partition coefficient, defined as the ratio of drug concentration in the gel per drug concentration in solution. To maintain a constant release rate or flux of drug from the reservoir, the concentration difference must remain constant. This can be achieved by designing a device with excess solid drug in the core. Under these conditions, the internal solution in the core will remain saturated. This type of device is an extremely useful device, allows for time-independent or zero-order release 2, 7. 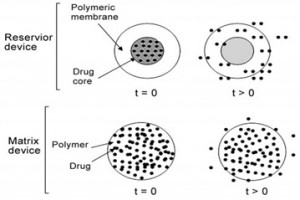 The two terms on the right side represent the diffusion and polymer relaxation contribution to the release profile respectively. Korsmeyer and Peppas introduced a dimensionless swelling interface number Sw, to correlate the moving boundary phenomena to hydrogel swelling

In pendent chain systems, drugs are covalently linked to the hydrogel network device through cleavable spacers and drug release is controlled by the rate with which spacer bond cleavage occurs. In specific applications where a more targeted delivery approach is desired, it is advantageous to design enzymatically cleavable spacer bonds. 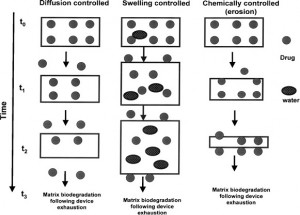 FIG. 10: A SCHEMATIC DRAWING ILLUSTRATING THE THREE MECHANISMS FOR CONTROLLED DRUG RELEASE FROM A POLYMER MATRIX

Hydrogels formed by xyloglucan were also evaluated as a sustained release vehicle for the intraperitoneal administration of mitomycin. PAA/polymethacrylic acid forms a pH-sensitive complex with PEG in situ, possessing the potential to release drug substances subcutaneously over a period of a few days 1, 2, 3, 7.

Thermo sensitive, specific ion sensitive or pH- sensitive hydrogels have been examined for their potential as vehicles for ocular drugs. Poloxamers as thermo gelling polymers could be applicable for the development of effective ophthalmic drug delivery 2, 3.

In this communication, the effect of different factors, such as type of electrolyte, ionic strength, temperature (ranging from 20 to 40°C) and cationic surfactants on the distribution coefficients (α) and release rate constants (kR) of deoxyribonucleic acid (DNA) from PVA-DNA blend gel matrices (of a sheet shape), will be presented and discussed. The release kinetic constant and the distribution coefficient of DNA are quite sensitive to the surrounding matrix media (e.g., kR ranges from 1.5·10–8 to 4.7·10–7 s–1). The analysis of the temperature dependence on kR shows that the activation energy for the DNA desorption to an aqueous solution is equal to 21.2kJ/mol. These results constitute a step forward towards the design of controlled DNA release PVA-based devices 19.

Swelling ratio, degradation, and rheological behaviors of Pluronic hydrogels were investigated. When plasmid DNA was loaded in the hydrogels for sustained delivery, various release profiles were attained by varying UV irradiation time and modified HA amounts. Entrapped DNA was gradually damaged with increasing the UV exposure time as evidenced by decreasing the transfection efficiency. The DNA fractions released from the HA/ Pluronic hydrogels, however, exhibited considerable transfection efficiencies commensurate with the UV exposure time, suggesting that they were not chemically degraded during the release period and substantially maintained functional gene expression activities despite the UV irradiation 18.

Hydrogels that are responsive to specific molecules, such as glucose or antigens, can be used as biosensors as well as drug delivery systems. Light-sensitive, pressure-responsive and electro-sensitive hydrogels also have potential to be used in drug delivery and bioseparation. Combining the functions of bio-molecules, such as enzymes, with pH or temperature-sensitive polymers can also lead to the construction of biomolecule-sensitive systems. Even though most biomolecule sensitive hydrogels still require further research, they are likely to become quite important biomaterials in the near future. Some of the studies described in this review will surely lead, not only to a better understanding of the structures and functions of biomolecule and environment sensitive hydrogels, but also to promising strategies for the development of novel stimuli-sensitive hydrogels.