STOMACH SPECIFIC DRUG DELIVERY SYSTEM AND ITS IN VITRO-IN VIVO EVALUATION: A REVIEW

STOMACH SPECIFIC DRUG DELIVERY SYSTEM AND ITS IN VITRO-IN VIVO EVALUATION: A REVIEW

Stomach specific drug delivery system has occupied importance due to requirement of drug for local action and for those drugs that remains unaffected due to action of gastric fluid. Oral rout is considered most natural, unpredicted, and safe due to its ease of administration, Patient acceptance and convenience. Oral controlled release delivery systems are programmed to deliver the drug in predictable time frame that will increase the efficacy and minimize the adverse effects and increase the bioavailability of drugs. In Stomach specific drug delivery system gastric retention can be achievedby forming bioadhesive system, swelling and expanding system, floating system and high density systems. In fact the buoyant dosage unit enhances gastric residence time (GRT) without affecting the intrinsic rate of emptying and gives prolonged effect of drug.  Systems can remain in the gastric region for several hours and hence significantly prolong the gastric residence time of drugs and reduces dosing time. In this review various types of stomach specific dosage form and their in-vitro and in-vivo parameters for evaluation are discussed.

INTRODUCTION:It was suggested that compounding narrow absorption window drugs in a unique pharmaceutical dosage form with gastroretentive properties would enable an extended absorption phase of these drugs. As considering the need of the drug to have its local action on the stomach.

Stomach specific  drug delivery systems are among the several approaches that have been developed in order to increase the gastric residence time of the dosage forms The controlled gastric retention of solid dosage forms may be achieved by the mechanisms of mucoadhesion,flotation,sedimentation,expansion,modified shape systems,or by the simultaneous administration of pharmacological agents  that delay gastric emptying.

Both low and high-density drug delivery systems have been suggested as possible approaches to extend the transit time but the results of exploratory studies area equivocal 1. In another system in which particle size, relative to stomach retropulsion has been suggested as a means to delay stomach emptying and thereby prolong transit time.

In case of floating drug delivery system the multiple unit system has been developed to identify the merit over a single unit dosage form because the single unit floating systems are more popular but have a disadvantage owing to their "all‐or‐nothing" emptying process, leading to high variability of the gastrointestinal transit time. The stomach specific drug systems are meant 2,

Gastric residence of the drug can be achieved by the decreasing the density lower than the gastric fluid. Fatty material with a bulk density lower than one may be added to the formulation to decrease the water intake rate and increase buoyancy. Floating systems includes matrices prepared from polymers that swells upon the absorption of gastric fluid and attains buyoncy.

Poor patient compliance; increased chances of missing the dose of a drug with short half-life for which frequent administration is necessary. A typical peak plasma concentration time profile is obtained which makes attainment of steady state condition difficult. The unavoidable fluctuation in the drug concentration may lead to under medication or over medication as the steady state concentration values fall or rise beyond in the therapeutic range. The fluctuating drug levels may lead to precipitation of adverse effects especially of a drug with small therapeutic index whenever overmedication occurs. The above problems can be overcome by the development of effective and safer use of existing drugs through concepts and technique of controlled and targeted drug delivery system. The controlled drug delivery system is one, which delivers the drug at a predetermined rate, locally or systemically for a predetermined period of time. The targeted drug delivery system is one, which delivers the drug only to its site of action and not to the nontarget organs or tissues 4.

The advantages of controlled drug delivery system over the conventional dosage forms  are as  follows:

Despite the several advantages associated with oral controlled drug delivery systems, there are so many disadvantages, which are as follows:

The above mention limitation of controlled release can be overcome by Gastro  retentive system 5. 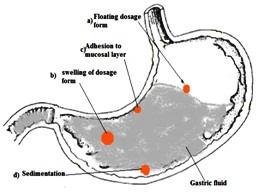 FDDS is further categorised as; 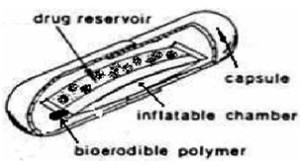 Drug release is controlled by the formation of hydrated boundary at the surface.  Continuous erosion of the surface allows water penetration to the inner layer, maintaining surface hydration and buoyancy. Incorporation of fatty excipients gives low density formulations and reduces penetration of water, reducing the erosion. But its limitation is the passivity of operation. It depends on the air sealed in the dry mass centre following hydration of gelatinous surface layer and hence the characteristics and amount of polymer. Effective drug delivery depends on the balance of drug loading and effect of polymer on its release profile.

Preparation of Hollow Microspheres by Diffusion Method: Hollow microspheres are prepared by novel emulsion-solvent diffusion Method. The ethanol: dichloromethane solution of drug and enteric acrylic polymer was poured into an agitated aqueous solution of PVA that was thermally controlled at 400 C. The gas phase generated in dispersed polymer droplet by evaporation. The microballoons floated continuously over the surface of acidic dissolution media containing surfactant for more than 12 hours in vitro. Quantity of polymers and the plasticizer polymer ratio and also the solvent used for formulation determines buoyancy and drug release from dosage form.

Preparation of Hollow Microspheres by Evaporation Method: Hollow microspheres are prepared by evaporation methods to create the hollow inner core. Polymer is dissolved in an organic solvent and the drug is either dissolved or dispersed in the polymer solution. The solution containing the drug is then emulsified into an aqueous phase containing polyvinyl alcohol to form oil in water emulsion. After the formation of a stable emulsion, the organic solvent is evaporated either by increasing the temperature under pressure or by continuous stirring. The solvent removal leads to polymer precipitation at the o/w interface of droplets, forming cavity and thus making them hollow to impart the floating properties. 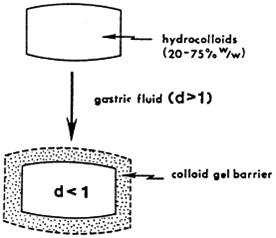 As dosage form  gets imbibed due to contact with gastric fluid, and the polymer get swell which results into crosslink’s in the hydrophilic polymer network .due to cross linking dissolution of polymer is prevented 20. A high degree of cross linking retards the swelling ability of the system and maintains its physical integrity for a prolonged period. On the other hand, a low degree of cross-linking results in extensive swelling followed by the rapid dissolution of the polymer.

An optimum amount of cross-linking is required to maintain a balance between swelling and dissolution. The swollen system eventually will lose its integrity because of a loss of mechanical strength caused by abrasion or erosion or will burst into small fragments when the membrane ruptures because of continuous expansion. These systems also may erode in the presence of gastric juices so that after a predetermined time the device no longer can attain or retain the expanded configuration 21.

1)      Size and Shape Evaluation: Particle size and the size distribution of the beads or microspheres are determined in the dry state by optical microscopy 25.

2)      Surface characterizations (for Floating Microspheres and Beads): The external cross-sectional morphology is carried out by scanning electron microscopy SEM 25.

3)      Drug Loading Efficiency: Accurately weighed sample of beads or microspheres crushed in a mortar and adding it to the appropriate dissolution medium this is then centrifuged, filtered and analyzed by a variety of analytical methods like Spectrophotometry 25.

Amount of Drug in Sample

Weight of total Beads or Microspheres

5)      Dissolution Studies: In vitro dissolution test is generally done by using USP paddle type apparatus. Studies are usually carried out in SGF & SIF maintained at 37°C. It is done by placing tablet in a dry basket at the beginning of each test. Lower the Basket before rotation operates the apparatus immediately at 50 rpm Medium used for release rate study was 900ml 0.1 N HCl during the course of study whole assembly was maintained at 37+0.5 oC. Withdraw a 5 ml of sample at specific time interval and replaced with 5 ml of fresh dissolution medium. The withdrawn samples were dilute with dissolution medium and then filter it with whattman filter paper and assayed. The % release of drug was calculated. The observations for different batches are shown in succeeding tables. The percentage release of drug with respect to time for each batch, are graphically show.

As floating dosage form not rotates may not give proper result and also not reproducible results. Similar problem occur with swellable dosage form, as they are hydrogels may stick to surface of vessel or paddle and gives irreproducible results. In order to prevent such problems; various types of modification in dissolution assembly made are as Follows. To prevent sticking at vessel or paddle and to improve movement of dosage form, method suggested is to keep paddle at surface and not too deep inside dissolution medium 29. 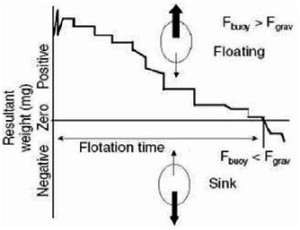 FIG. 6: POSITIONS OF GASTRORETENTIVE DOSAGE FORMS AND ITS DISSOLUTION

7)      Stability: To assess the stability of the optimized formulation, stability studies were conducted as per the ICH and WHO guidelines. Formulations were packed in HDPE bottles and were kept in the specified temperature and humidity conditions for prescribed duration. At the end of studies, samples were analyzed for the drug content, in vitro dissolution, floating behavior and other physicochemical parameters.

9)      Water uptake (for Swelling and Expanding Systems): It measures swelling property of swellable matrix. Here dosage form is removed out at regular interval and weight changes are determined with respect to time.

10)  Swelling index (for Swelling and Expanding Systems):  As swelling of tablet results in increase in weight and volume of tablet the extent of swelling can be measured in terms of % weight gain by the tablet.

Wo = Weight of tablet before placing in the beaker 29.

11)  Mucoadhesive Strength (In case of Mucoadhesive Dosage Forms: Mucoadhesive strength of the tablet was measured on the modified physical balance. Goat or rat stomach mucosa was used as a model membrane and buffer media 0.1N HCl pH 1.2 was used as moistening fluid. The underlying mucous membrane was separated using surgical blade and wash thoroughly with buffer media 0.1N HCl pH 1.2. It was then tied over the protrusion in the Teflon block using a thread. The block was then kept in glass beaker. The beaker was filled with phosphate buffer media 0.1N HCl pH 1.2 up to the upper surface of the goat stomach mucosa to maintain stomach mucosa viability during the experiments. The one side of the tablet was attached to the glass slide of the right arm of the balance and then the beaker was raised slowly until contact between goat mucosa and mucoadhesive tablet was established.

12)  Floating Time: Test for buoyancy is usually performed in SGF Simulated Gastric Fluid maintained at 370C.The time for which the dosage form continuously floats on the dissolution media is termed as floating time.

CONCLUSION: Stomach specific drug delivery system offer unique carrier system for many pharmaceuticals and can be tailored to adhere to any mucosal tissue or remain lodged into stomach due to swelling, density or by magnetic means. This gives a signal to extending this approach to improve bioavailability of poorly absorbed drugs in GIT. Designing GRDDS requires a thorough understanding of the physicochemical properties of the drug, the physiological events of the GIT and formulation strategies.

ACKNOWLEDGEMENT: I offer my heartiest thanks and sincere acknowledgement to Mr. R. D. Bendgude (HOD Dept. of Medicinal Chemistry, SVERIs College of Pharmacy), Mr. V.A. Bairagi, Mr. Gangurde A. B. and Mr. D.M. Patil (K.B.H.S.S.T’s Institute of Pharmacy, Malegaon). I express my deep sense of gratitude to my parents and well wishers who co-operated me indirectly for the completion of my Work.