STORAGE OF WORKING STANDARDS IN POLYPROPYLENE CONTAINERS, ITS EFFECT, CONTAMINANTS AND IMPACT ON ANALYSIS ON LIQUID CHROMATOGRAPHY TANDEM MASS SPECTROSCOPY

STORAGE OF WORKING STANDARDS IN POLYPROPYLENE CONTAINERS, ITS EFFECT, CONTAMINANTS AND IMPACT ON ANALYSIS ON LIQUID CHROMATOGRAPHY TANDEM MASS SPECTROSCOPY

Authorspropose a method to determine the contamination caused during the storage of colchicine stock solution, which will be helpful for the bioanalytical scientists. The process of identification of impurities, exceptionally in this case, started from the point of optimization of the compound, where in the parent ion was not detected and instead an unknown mass is being interpreted by the detector, which was further identified as a plasticizer but not as colchicine. To reconfirm the contamination by the plasticizer, a commercially available colchicine tablet was powdered and extracted with methanol and infused in Q1 MS scan mode. The supernatant solution of Colchicine extract has resulted in a transition of 400.41 m/z which was found to be more predominant. Again the tuning solution of working standard was infused with the same parameters, the same contamination parent peak was found and in addition to this experiment, confirmation against the product ion was also performed, where in the mass transition is found to be 149.177 m/z. Finally, it was found to be a phthalate (Bis (2-3ethylhexyl) phthalate) contamination. The source of contamination was found to be a low density polypropylene container, where the stock solution was stored. Researchers conclude the cause of contamination and hope this research publication will guide the analysts going into further research in colchicine.

The main objective and goal of any analytical method is to obtain accurate, precise, reliable and constant result. The preliminary supportive action for the achievement of obtaining such methods is storing of working standards. Storing the working standards should be appropriate based on the nature of the molecules, to ensure contamination and degradation free, stability of the molecules. Working reference standards are the materials which are used for the identification, purity and quantification of substances and also used in calibration and analytical validation activities.

For these activities, storage plays a major role in maintaining the stability of the analytes particularly, during the storage of working standards and working standards stock solution. Colchicine chemically N-(5, 6, 7, 9- Tetrahydro-1, 2, 3, 10- tetramethoxy-9-oxobenzo [alpha]heptalen-7-yl)acetamide, with a molecular mass of 399.437 g/mol 6. Colchicine is used for the treatment gout; it is a toxic natural product, mainly used for the treat rheumatic complaints and swelling.

MS/MS Detection: Precursor ion for Colchicine was determined from mass spectra obtained by the TSQ mass spectrometer. TSQ Mass Spectrometer includes an electronically-controlled, integrated syringe pump. The MS condition for Colchicine was optimized by separate infusion into the MS at a flow rate of 5µL/min constantly while adjusting MS parameters to achieve maximal intensity. Electro-spray ionization in negative ion mode (ESI+ve) was used for ionization and selective reaction monitoring (SRM) mode was chosen for detection.

Preparation of Tuning Solution of Working Standard (Colchicine): Weighed about 10mg of colchicine, transferred to 10mL of standard flask containing 5mL of methanol to dissolve it and made up to volume with methanol. Tuning solution was prepared by further dilution to attain a concentration of 100ng/mL and 200ng/mL.

Optimization of the working standard, tuning:

(Colchicine) in Reverse Phase: Working Standard (Colchicine) was optimized by using TSQ Ultra mass Spectrometer which includes an electronically-controlled, integrated syringe pump infusion, while optimization of working standard colchicine at a concentration of 100ng/mL in Q1MS mode, for the parent transition ion of colchicine, no intensity was found at the expected mass, instead a high intensity was found at a transition of 391.40m/z. So, researchers optimized with a higher concentration of colchicine at 200ng/mL, unexpectedly, again the parent ion intensity was not found and the same transition was observed at 391.40m/z (Fig. 1). With a suspicion about the presence of the ion suppression, it was decided to optimize colchicine in normal phase.

Optimization of the working standard, tuning:

(Colchicine) in Normal Phase: Optimization was carried out in normal phase with the same concentration of the tuning solution by flushing the entire syringe and system with methanol in order to remove all the water trace from the system (when water interacts with Iso-propylalcohol, it leads to leaching of Teflon) and followed by Iso-propylalcohol washing. Then the tuning solution was prepared and infused with Dichloromethane. But still, the baseline was more due to the ion suppression and the parent ion of colchicine was not found (shown in fig. 2).

FIG. 2: TRANSITION IONS IN OPTIMIZATION OF WORKING STANDARD BY NORMAL PHASE AND BASE LINE

Determination of contamination in the working standard: Researchers suspected with the working standard and suspected the absence of parent ion may be due to contamination or degradation by some unknown source. It was decided to confirm the presence of contamination by infusing colchicine from some other source. According to the literature available it was found that, the unknown transition ion at 391.47 may be of some plasticizer (Bis (2-ethylhexyl) phthalate)7, 8, 9. Before performing the test, researchers tested the instrument to check its accuracy and performance. After the instrument check, instrument performance was confirmed it is good. Commercially available colchicine tablet was purchased and the same concentration for tuning was prepared in methanol by diluting and filtering the solution. Then, the tuning solution concentration of 100ng/mL was infused into the instrument. Finally, the parent ion of colchicine was identified in the solution prepared from the tablet. The parent ion was found with a high intensity at 400.40 m/z 6 (shown in Fig. 3). 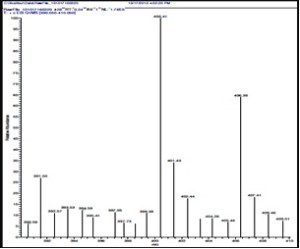 As expected, the parent ion of the plasticizer at 392.40 m/z was found with greaterintensity. Again while optimizing the product ions for the parent mass 391.40 m/z, a product ion mass of 149.177 m/z 1, 2, 3, 4 (shown in Fig. 4) was found to be predominant and later on identified to be a product ion of a common dinonyl phthalate (plasticizer)

Researchers tried to avoid use of all the possible sources and also placed an ion trap in the nitrogen supply, milli-Q water system and peek tubes do not contains phthalates. Finally, it was found that the storage of working standard stock solution was in a polypropylene tube which may be the cause of contamination, which belongs to low density poly propylene, in which (Bis (2-ethylhexyl) phthalate) was the plasticizer 8, 9 most commonly used in the manufacturing of the containers. It is also suggested that identifying the correct source of contamination is also more important as the chemicals, materials and other utilities are always involved with the cost variables. With the same intention, the bio analyst was again found to be successful in finding the reason for contamination. It was concluded by the SRM transitions 400.40 m/z obtained by the stock dilution prepared from the same working standard in the glass centrifuge tubes (15 mL).

CONCLUSION: In the process as reported, researchers have limited the discussions on contamination of the drug by some source of low density polypropylene containers. Contamination or degradation is a complex problem and it takes more time and efforts to understand about the problem and to develop the method while rectifying the issues. In other hand, polypropylene containers are more efficient while use and storage, the mechanism of the degradation may be due to the unique chemistry associated to the molecules.

Researchers proposed a way to find out the contamination with an intention that troubleshooting has to be performed in a proper way. The young growing researchers may think that the absence of the parent ion and daughter ion transitions may be because of the ion suppression or ionization problems. Till the problems are found out proactively, it is very difficult for the bio-analyst to develop some good robust methods.