INTRODUCTION: Nasal mucosa has been considered as a potential administration route to achieve faster and higher level of drug absorption because it is permeable to more compounds than the gastrointestinal tract due to lack of pancreatic and gastric enzymatic activity, neutral pH of the nasal mucus and less dilution by gastrointestinal contents 1.

In recent years many drugs have been shown to achieve better systemic bioavailability through nasal route than by oral administration. Nasal therapy is the recognized form of treatment in the Ayurvedic systems of Indian medicine, and also called as NASAYA KARMA 2. Nasal drug delivery which is practiced since years, has been given a new lease of life.

It is a useful delivery method for drugs that are active in low doses and show no minimal oral bioavailability such as proteins and peptides. One of the reasons for low degree of absorption of peptides and proteins via the nasal route is rapid movement away from the absorption site in the nasal cavity due to the mucociliary clearance mechanism.

The nasal route circumvents hepatic first pass elimination associated with the oral delivery. It is easily accessible and suitable for self-medication. During the past several decades, the feasibility of drug delivery via the nasal route has received increasing attention from pharmaceutical scientists and clinicians.

Drug candidates ranging from small metal ions to large macromolecular proteins have been tested in various animal models. It has been documented that nasal administration of certain hormones and steroids results in more complete absorption 3, 4. This indicates the potential value of the nasal route for administration of systemic medications as well as utilization of this route for local effects. For many years, drugs have been administered nasally for both topical and systemic action.

Topical administration includes the treatment of congestion, rhinitis, sinusitis and related allergic or chronic conditions and has resulted in a variety of different medications including corticoids, antihistamines, anticholinergic and vasoconstrictors. In recent years, increasing investigations of the nasal route have focused especially on nasal application for systemic drug delivery. Only a few nasal delivery systems used in experimental studies are currently in the market to deliver therapeutics into the nasal cavities, i.e., nasal drops as multiple or single dose formulation, aqueous nasal sprays, nasal gel pump, pressurized MDIs and dry powder inhalers.

Advantages 5:The main advantages include are;

1)      Drug degradation that is observed in the gastrointestinal tract is absent.

3)      Rapid drug absorption and quick onset of action can be achieved.

4)      The bioavailability of larger drug molecules can be improved by means of absorption enhancer or other approach.

5)      The nasal bioavailability for smaller drug molecules is good.

6)      Drugs that are orally not absorbed can be delivered to the systemic circulation by nasal drug delivery.

7)      Studies so far carried out indicate that the nasal route is an alternate to parenteral route, especially, for protein and peptide drugs.

8)      Convenient for the patients, especially for those on long term therapy, when compared with parenteral medication.

9)      Drugs possessing poor stability in g.i.t. fluids are given by nasal route.

10)  Polar compounds exhibiting poor oral absorption may be particularly suited for this route of delivery.

Disadvantages 6: Any delivery system poses certain disadvantages. The limitations of nasal delivery are;

1)      The histological toxicity of absorption enhancers used in nasal drug delivery system is not yet clearly established.

2)      Relatively inconvenient to patients when compared to oral delivery systems since there is a possibility of nasal irritation.

4)      There is a risk of local side effects and irreversible damage of the cilia on the nasal mucosa, both from the substance and from constituents added to the dosage form.

5)      Certain surfactants used as chemical enhancers may disrupt and even dissolve the membrane in high concentration.

6)      There could be a mechanical loss of the dosage form into the other parts of the respiratory tract like lungs because of the improper technique of administration.

Anatomy & Physiology of Nasal Cavity: The nasal cavity is divided into two halves by the nasal septum and extends posterior to the nasopharynx, while the most anterior part of the nasal cavity, the nasal vestibule, opens to the face through the nostril. The nasal cavity consists of three main regions. Thay are nasal vestibule, olfactory region and respiratory region. The surface area in the nose is enlarged about 150cm2 by the lateral walls of the nasal cavity which includes a folded structure. It has a very high surface area compared to its small volume. This folded structure consists of three turbinate’s - the superior, the median and the inferior. The main nasal airway having the narrow passages usually has 1-3mm wide and these narrows structures are useful to nose to carry out its main functions.

The nasal cavity is covered with a mucous membrane which can be divided into two areas i.e.; non-olfactory and olfactory epithelium. In non-olfactory area includes the nasal vestibule which is covered with skin-like stratified squamous epithelium cells where as in respiratory region, it has typical airways in the epithelium covered with numerous microvilli, resulting in a large surface area available for drug absorption and transport. In this way the mucus layer is propelled in a direction from the anterior towards the posterior part of the nasal cavity. The goblet cells are present in the mucus membrane which covers the nasal turbinate and the atrium. It secretes mucus as mucus granules which swell in the nasal fluid to contribute to the mucus layer.

The mucus secretion is composed of about 95% water, 2 % mucin, 1% salts, 1% of proteins such as albumin, immunoglobulins, lysozyme and lactoferrin, and 1% lipids. The mucus secretion gives immune protection against inhaled bacteria and viruses. It also performs a number of physiological functions. It covers the mucosa, and physically and enzymatically protects it. The mucus has water-holding capacity. It exhibits surface electrical activity. It permits efficient heat transfer. It acts as adhesive and transports particulate matter towards the nasopharynx 7.

Mechanism of Nasal Absorption: The absorbed drugs from the nasal cavity must pass through the mucus layer. It is the first step in absorption. Small, unchanged drugs easily pass through this layer but large, charged drugs are difficult to cross it. The principle protein of the mucus is mucin which has the tendency to bind to the solutes, hindering diffusion. Additionally, structural changes in the mucus layer are possible as a result of environmental changes. The two mechanisms that include there 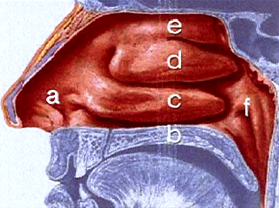 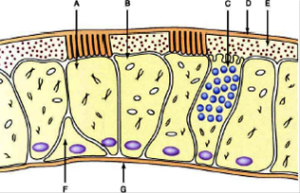 Barriers to Nasal Absorption: Nasal drug delivery systems are considered as a profitable route for the formulation scientist because it has easy and simple formulation strategies. The therapeutic efficacy and toxicities of intra-nasally administered drug products are influenced by number of factors. The following factors are the barriers to the absorption of drugs through nasal cavity.

Drugs can cross the epithelial cell membrane either by the transcellular route exploiting simple concentration gradients, by receptor mediated or vesicular transport mechanisms, or by the paracellular route through the tight junctions between the cells. Polar drugs with molecular weights below 1000 Da generally pass the membrane using the latter route. Larger peptides and proteins pass through the nasal membrane using an endocytotic transport process but only in low amounts.

Factors influencing Nasal Drug Absorption: Several factors affect the systemic bioavailability of drugs which are administered through the nasal route. They include physiochemical properties of the drugs, anatomical and physiological properties of the nasal cavity and the type and characteristics of selected nasal drugs delivery system. These factors play key role for most of the drugs in order to reach therapeutically effective blood levels after nasal administration. The factors influencing nasal drug absorption are described as follows.

Delivery Effect Factors: The factors that affect the delivery of drug across nasal mucosa are surfactants, dose pH, osmolarity, viscosity, particle size and nasal clearance and drug structure. These can be used to enhance the absorption.

The posterior chamber of nasal cavity will use for the deposition of dosage form. It is eliminated by the mucociliary clearance process and hence shows low bioavailability 16. The site of disposition and distribution of the dosage forms mainly depend on delivery device, mode of administration, physicochemical properties of drug molecule.

The prodrug undergoes enzymatic transformation to release the active medicament, when it crosses the enzymatic and membrane barrier. The absorption of peptides like angiotensin II, bradykinin, caulein, carnosine, enkephalin, vasopressin and calcitonin are improved by preparing enamine derivatives. These agents show absorption enhancement with prodrug approach.

The microspheres prepared by using polymers like dextran, chitosan; biodegradable starch microspheres successfully improved the bioavailability of various drugs. Liposomes are amphiphilic in nature are well characterized for favorable permeation of drugs through the biological membranes, so the water soluble drugs can be delivered through the nasal route.

Liquid Nasal Formulations: Liquid preparations are the most widely used dosage forms for nasal administration of drugs. They are mainly based on aqueous state formulations. Their humidifying effect is convenient and useful, since many allergic and chronic diseases are often connected with crusts and drying of mucous membranes. Microbiological stability, irritation and allergic rhinitis are the major drawbacks associated with the water based dosage forms because the required preservatives impair mucociliary function and the reduced chemical stability of the dissolved drug substance and the short residence time of the formulation in the nasal cavity are major disadvantages of liquid formulations 20. The several types dosage forms available in liquid form are described below.