INTRODUCTION: Lactic acid bacteria (LAB) belong to the order Lactobacillales and produce lactic acid as a result of carbohydrate fermentation. They are widely used in the production of fermented food. They are heterotrophic and generally have complex nutritional requirements because they lack many biosynthetic capabilities. Because of this, LAB is generally abundant only in environments, where these requirements can be provided, such as animal oral cavities and intestines 1.

Of the trace metals known to function in biochemical processes, iron, zinc, and magnesium are probably used by all bacteria, whereas nickel, cobalt, selenium, and molybdenum are only used by some. No function for copper or selenium has been identified in any member of the Lactobacillales 2. Some trace metals, like iron, selenium, molybdenum, manganese, and copper, are often scarce in the environment, and it can be assumed that cells requiring these metals possess corresponding uptake systems. However, few of these have been characterized to date.  For essential metals like copper, nickel, cobalt, and zinc, which can occur in widely different bioavailable concentrations in the environment, bacteria must have homeostatic control mechanisms that can deal with excess as well as with deficiency 3.

Unfortunately, the knowledge of metal homeostasis and defense against metal stress by LAB is still very limited. Of all the biologically relevant metals, copper by far has received the widest attention. It is well known that zinc is an essential element required by all living organisms. Zinc is essential for normal growth and development, and most aspects of reproduction. Next, to iron, it is the most abundant trace mineral in the body. It is a structural constituent of many enzymes and proteins, including metabolic enzymes, transcription factors, and cellular signaling proteins 4.

The interactions between metal ions and micro-organisms have been widely investigated in the previous years as their understanding may contribute to the development of suitable biotechnological approaches to tackle environmental problems associated with metal pollution. Homology modeling is an important computational technique, within structural biology, to determine the 3D structure of proteins. It uses available high- resolution protein structures to produce a model of a protein of similar, but unknown, structure 5.

Our attention in this paper is homology modeling studies of differentially expressed proteins of Lactobacillus rhamnosus under copper sulfate and zinc chloride stress. Three-dimensional structures of these proteins were not yet available.

Hence, we were concentrated on structural features for the understanding of molecular function. The model structures of these proteins were constructed.

2-D Gel Electrophoresis and Image Analysis: The copper sulfate and zinc chloride stressed L. rhamnosus proteins were isolated and subjected to 2-D gel electrophoresis, which was described in our previous research publication 7.

Homology Modelling: The sequences of copper sulfate and zinc chloride stressed proteins were obtained from mass spectroscopy data. The modeling step can be carried out by searching the metal stress expressed protein sequences against the databases of well-defined template sequences were identified by the BLAST program 9 against protein database (PDB), which shows the maximum identity with a high score and less e-value designated as a template. All sequence alignments were completed by using Clustal W.

The 3-D model was generated by using the academic version of MODELLER 9.5, based on the information obtained from sequence alignment. The 3-D structure obtained from modeler 10. Further analyzed by Ramachandran’s map drawn using PROCHECK v.3.0 and verified 3-D. These programs accessed from the SAVES online server and the model satisfying all the parameters after the evaluation was considered for the further process.

The acetyltransferase protein structure was not predicted because Query coverage, identity, and E-value were not allowed to predict the structure. The modeling of the three-dimensional structure of the protein was performed by three homology modeling program MODELLER.

Out of five proteins, three-dimensional structures were modeled for three proteins since it has been reported that these proteins of L. rhamnosus altered in Zinc stress condition represented in Table 2. The Alkaline shock protein and Cell division initiation protein Div IVA proteins structures were not predicted because Query coverage, identity, and E-value were not allowed to predict the structure.

The phi and psi distribution of the Ramachandran’s Map generated by non-glycine, non proline residues were summarized in the said Table 3. The final modeled structures were visualized by Swiss PDB Viewer that was shown in the following Fig. 1.

The phi and psi distribution of the Ramachandran’s Map generated by of non-glycine, non proline residues were summarized in the said Table 4. The final modeled structures were visualized by Swiss PDB viewer that was shown in the following Fig. 2. 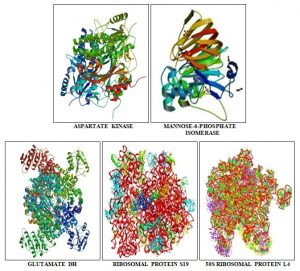 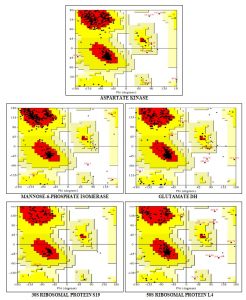 The stereochemical quality of the predicted protein models and accuracy of the protein model was evaluated after the refinement process, by using Ramachandran’s Map calculations were computed with the PROCHECK program. The assessment of the predicted models generated by MODELLER 9.5v was shown in Fig. 3 and 4. The main chain parameters plotted are Ramachandran’s plot quality, peptide bond planarity, Bad non-bonded interactions, main chain hydrogen bond energy, C-alpha chirality, and over-all G factor. In the Ramachandran’s plot analysis, the residues were classified according to its regions in the quadrangle.

The red regions in the graph indicate the most allowed regions, whereas the yellow regions represent allowed regions. Glycine is represented by triangles, and other residues are represented by squares. The result revealed that the modeled structure for Aspartate kinase, Mannose-6-phosphate isomerase, Glutamate dehydrogenase, 30s ribosomal protein S19, 50s ribosomal protein L4, Pyruvate oxidase, Thymidylate synthase and ATP dependent Clp protease ATP- binding subunit ClpL have 90.5%, 90.1%, 89.8%, 90%, 87.6%, 93.0%, 89.1% and 87.0% residue  respectively in allowed region. The distribution of the main chain bond lengths and bond angles were found to be within limits for these proteins.

Such figures assigned by Ramachandran’s plot represent the good quality of the predicted models. 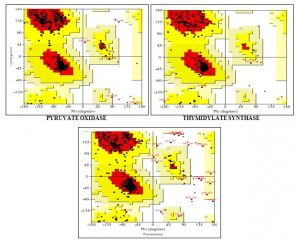 All the results obtained from RMSD, verify3 - D and PROCHECK assembled showed the results for homology modeling. These structures are allowed as biomarkers and provide a good foundation for a finding new potential drug.