ABSTRACT: Schiff bases from chitosan and 5-nitro salicylaldehyde-aniline complexes represented the important structural subject in excess of biologically active molecules, including synthetic. The introduction of 5-nitro salicylaldehyde at C-2 nitrogen position and aniline at C-6 oxygen position of chitosan. The structure-activity relationship (SAR) of the double Schiff based chitosan, synthesized from the condensation reaction of equimolar amounts of 5-nitrosalicyl-aldehyde, chitosan, and aniline in DMSO. The chitin and the phenyl rings deviate from co-planarity with an inter and intra-molecular bond (–C2-N=CH–), (–C6–C=N–). The title compound C69H118N11O43 is not a planner, with a dihedral angle among the planes of the three aryl rings. The structure is a heterocyclic derivative constituting a stimulating class of compounds with synthetic flexibility and productive biological activities. The synthesized compound structurally categorized by FT-IR, 1H-NMR, GC-Mass spectra, and TG/DTA studies. The 1H-NMR spectroscopy used to determine the degree of acetylation in chitosan. The synthesized compound primarily parted for their in-vitro growth constraining activity against a different strain of bacterial and fungal. The in-vitro antioxidant activity of the mixture was determined by metal chelating activity and ferric falling antioxidant power assay. The in-vitro cytotoxicity tests of the ligand carried out tumour cell lines in only live cells. The derivatives have remarkable pharmaceutical activities as an anti-fungal, anti-cancer anti-bacterial, and anti-oxidant compound.

These have studied widely due to their elasticity, selectivity, and compassion and structural comparisons with natural biological elements and the presence of imine group (-N=CH-) impart biological activity Fig. 1.

The topical application of Schiff base ligands has recently revived the usefulness in medicine. The occurrence of a double bond in conjugation with carbonyl functionally is said to be responsible for the biological activity of this compound.

The supplement of functional groups in the chitosan, improve its capacity of interaction with aniline by complexation. In this sense, the variation of chitosan with aldehydes to products Schiff bases result in a potential material for amine species with potentially analytical and environmental applications 1.

Past Work: According to Kurita, Mori, Nishiyama, and Harata (2002) 5, the introduction of carbonyl groups in chitosan results in Schiff bases whose degree of substitution is dependent on the stoichiometric amount of aldehyde used in the reaction. The novelty of the present work is the use of the diversified nature of new compounds containing Schiff bases as an integral part of the structure exhibit a variety of important biological possessions including anti-bacterial, anti-cancer, anti-fungal and anti-oxidant activities. Since earlier no work has been done that deliberates the impact of an aspect of the structure during biological activities. As a portion of our investigation, we report the synthesis, characterization, thermal studies, and anti-microbial, anti-cancer activities of the ligand and its aniline complex. Moreover, their structure-activity relationship (SAR) and mechanism of action also discussed.

Synthesis of Schiff Bases from Chitosan and Salicylaldehyde-Aniline Complexes: Previously purified chitosan (1.006 g, mmol) was dissolved in acetic acid (25 ml) and stirred at 75 °C for 12 h. Then 5-nitro salicylaldehyde (1.256 g, 0.3 mmol) dissolved in DMSO (25 ml) was added to the viscous solution. Then (0.5820 g, mmol) of aniline was added and continuously stirred and heated for 3 h at 75 °C until a clear solution was obtained. The formation of a deep yellow gel reveals the chitosan matrix. The liquid mixture obtained was purified by several distillation cycles to obtain a deep brownish liquid as the final product. Its purity was measured by 1H NMR, GC-Mass, and FT-IR spectroscopy.

FT-IR Spectroscopy: The FT-IR spectrum of the Schiff bases from chitosan and 5-nitro salicylaldehyde-aniline complexes present a strong absorption at 1640 cm-1 recognized to the ν (C=N) stretching vibrations characteristic of imines. This band is shifted to a lower frequency 3013 cm-1 in the complex related to those of the Schiff base ligand showing the coordination of the imino-nitrogen to the 5-nitro salicylaldehyde molecule.

The phenolic oxygen after deprotonation is exposed by the disappearance of the ν (OH) phenolic band at 3504 cm-1 and the shift of phenolic band at 1255 cm-1 in the complex. The absorption bands around 1012 and 1255 cm-1 (skeletal vibrations involving C-O stretching) is distinctive of chitosan's saccharide structure. Due to the nucleophile reaction, the bond is formed between the methoxy group of chitosan (O-CH3) and the NH2 group of aniline. Which is also confirmed in 1H-NMR (H-Ac) in 2.711 ppm 2, 3. The IR spectroscopy confirms the aniline chitosan formation represented by the absorption in 1012 cm-1 and 951 cm-1 bands. The monosubstituted aromatic ortho CH & OH out of plane stretching vibration of aniline and chitosan was further confirmed by the peak at 709.30 cm-1. The FT-IR spectrum of the modified chitosan obtained is presented in Fig. 2 and Table 1. 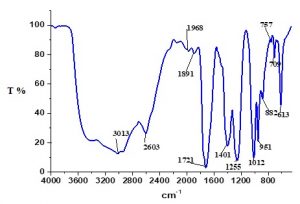 FIG. 2: THE FT-IR SPECTRUM OF THE CHITOSAN AND 5-NITROSALICYLALDEHYDE -ANILINE COMPLEXES 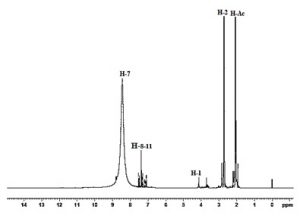 FIG. 3: THE 1H-NMR SPECTRUM OF THE CHITOSAN AND 5-NITROSALICYLALDEHYDE-ANILINE COMPLEXES

The occurrence of the substitution is in total agreement with the results found by IR and 1H-NMR described below.

Evidence of intramolecular hydrogen bonding between the o-phenolic –OH and the imine nitrogen of the Schiff bases are observed at (H-7, 8.80 ppm) in the compound.

The degree of acetylation is an important characteristic of chitosan and was determined from the ratio between and N-acetylated glucosamine (GlcNAc, 2.190 ppm) and the area of the proton 2 signal in the pyranose ring.

In this temperature, the spectrum allows a better resolution of the signals. The calculated value using the Eq. (1) was 10% of acetylation. 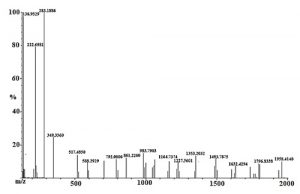 FIG. 4: THE GC-MASS SPECTRUM OF THE CHITOSAN AND 5-NITROSALICYLALDEHYDE -ANILINE COMPLEXES

Thermal Analysis: Thermograms of chitosan are displayed in Fig. 5. Thermograms of chitosan shown in Fig. 5a showed a three degradation pattern in the range of 40 °C - 498.0 °C. The first step occurs in the range of 90.6 °C - 135.0 °C, with a weight loss of -58.53%, which is related to the loss of water molecules present in the chitosan. The next step of degradation starts from 135.0 °C and extends till 221.30 °C, with a weight loss of 14.58% the degradation of polymeric chains of chitosan structure. The third step is due to the presence of salicylaldehyde moiety and 22.20%, indicating the complete weight loss of the samples. There is an exothermic peak on the TG-DTA curve in the range 225 °C - 376 °C 5. The use of the temperature of bio-polymers many was limited out by the breaking of chemical bonds but rather by changes in physical characteristics at elevated temperature. During the thermal degradation, the molecule positions itself in a closed packed system. So, that activation energy plays the primary role in disturbing the nature of the bonds. Hence, activation energy can intended using the percentage of weight loss against temperature as Ea=6.828 KJ from the TG curve. Activation energy related to each stage of decomposition is described by the equation,

The positive values of activation energy (Ea) are due to oxidation-reduction in the CS compound. The glass transition temperature Tg Fig. 5b taken as the extra plotted onset temperature 225°C of the baseline departure from the DTA curve and was determined as 40.0 °C. The thermal stability of the CS compound calculated as 213 °C. The DSC curve peak is present in Fig. 5c, the partial area of temperature 225 °C - 376 °C determined. A negative value of ∆S is the suggestion of a highly ordered activated complex, and the degrees of freedom of rotation as well as vibration are less than in a non-activated complex. It can be determined that the synthesized compound had moderate thermal stability. 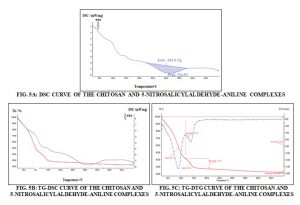 Where X1 and X2 are a different concentration of the given samples.

The results of an in-vitro study of the microbial activity of the afresh synthesized complexes against eight bacterial strains (Bacillus cereus-2106, Proteus vulgaris-20227, Bacillus megaterium, Enterococcus faecalis and Bacillus subtills as positive) and Enterobacter aerogens-2340, Proteus mirabilis-2388, Salmonella abony-2257 as gram-negative bacteria and seven fungal strains are reported in Table 5 and 6.

Antifungal Activity: The minimum inhibitory concentration (MIC) of chitosan its complexes, which showed significant activity against bacterial and fungal species, was also determined in Table 5. The MIC of these complexes varies from 40 mg/ml. The results indicated that these compounds were the most active in constraining the growth of the tested species at 29 mg/ml concentration.

The inhibition values indicate that most complexes have higher percentage towards Gram-positive compared to Gram-negative bacteria is due to the imine and glycolic linkages shared with the donor atoms (N and O) of the ligand and the π-electron delocalization over the The electron density increase in the chelate ring over C=N nitrogen leading to strong interactions with cell constituents.

Antioxidant Activity: Our study aimed at exploring the most potent anti-oxidant and examining the factors that give a picture and establish the antioxidant activity with frequent comparison to different absorptions of Schiff base ligand shown in Table 7.

Anticancer Activity: Immortal mouse embryonic fibroblast cell line (3T3) were full-grown in Dulbecco’s modified Eagle’s medium (DMEM) supplement with 10% fetal bovine serum, 100 U/ml penicillin and 100 μl/μg streptomycin and developed in a CO2 incubator at 37 °C in 5% CO2. Both the lines were cultured to 70-80 % confluence and seeded in 48 well plates (5 × 104 cells/well) and grown separately for the experiments Table 8. Generally, the compounds containing –NH2 group –OH and –NO2 found to be potent and selective. This compound is most active with –NH2 functionally and thereby inducing apoptosis in 3T3 cell lines.

Cell Viability Assay: MTT reaches 80% confluence, samples were other to cells in different concentrations (5 μl and 20 μl) and incubated for an additional 24 h. The media removed MTT prepared in PBS was added to cells in the concentration of 0.5 mg/ml per well and incubated for 4 h in a CO2 incubator. Live cells will convert MTT into purple formazan crystals, and dimethyl sulfoxide added to dissolve and read using a plate reader at 540 nm. Report on Biocompatibility Tests in below (CSIR-Central Leather Research Institute, Adyar, Chennai). 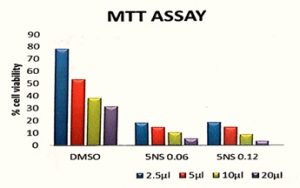 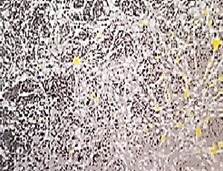 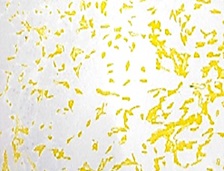 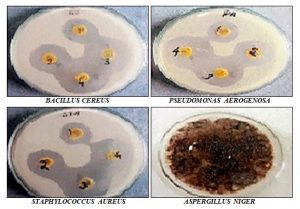 CONCLUSION: C2-5-Nitrobenzaldehyde-C6-aniline Schiff base derivatives of chitosan synthesized in this work. The degree of substitution and structure was determined as proposed by the 1H-NMR spectrometric procedure. Equally important is in the molecular weight distribution characterization of the final products.

The physicochemical, biological activities, and pharmaceutical properties of chitosan and salicylaldehyde-Aniline complexes will be studied and reported.