STRUCTURE BASED MOLECULAR DOCKING STUDIES ON SOME 1,3-DISUBSTITUTED UREA DERIVATIVES AS ANTI-TUBERCULAR AGENTS

STRUCTURE BASED MOLECULAR DOCKING STUDIES ON SOME 1,3-DISUBSTITUTED UREA DERIVATIVES AS ANTI-TUBERCULAR AGENTS

INTRODUCTION: Tuberculosis (TB) is a major health issue, especially in developing countries, that account for 95% cases and deaths worldwide according to the World Health Organization (WHO) 1. Although TB appears as a chronic disease with comparatively slow development multidrug- resistant strains can kill immune compromised patients in very short periods of time 2. Approximately 98% of human TB cases are caused by Mycobacterium tuberculosis.

M tuberculosis grows slowly in culture, requiring an average of 2 to 3 weeks of incubation before growth can be detected. 3. Rates of tuberculosis in Central Asia are extremely high 4. Central nervous system (CNS) involvement occurs in 5–10% of extra pulmonary tuberculosis cases. 5.

In 2012, WHO estimated that 450 000 new cases of multidrug resistant (MDR) tuberculosis—defined as Mycobacterium tuberculosis resistant to at least Isoniazid and rifampicin—occurred worldwide 6. Epoxides are three atom cyclic ethers formed by the oxidation of olefins 7. Soluble epoxide hydrolase (sEH) is a ubiquitous enzyme that catalyzes the conversion of epoxides into the corresponding vicinal diols by the addition of water 8. Epoxide hydrolases are widely spread in microorganisms. EHs are intracellular and constitutively expressed 7. Based on the catalytic mechanism and structure of sEH 1,3-disubstituted ureas, amides and carbamate were found to be potent and stable competitive inhibitors of sEH 9. Epoxide hydrolases are vital to many organisms by virtue of their roles in detoxification, metabolism and processing of signaling molecules 10. The Mycobacterium tuberculosis genome encodes at least six epoxide hydrolases (EHs A to F) 11. Suggesting that they might be of particular importance to these bacteria. 10.

Ligand-binding interactions are central to numerous biological processes signal transduction, physiological regulation, gene transcription and enzymatic reactions. These encompass both macromolecule complexes (e.g protein-protein and protein-DNA) and complexes of small molecules with macromolecules. A detailed understanding of interactions between small molecules and protein may therefore form the basis for a rational drug design strategy 12. Molecular docking is playing an increasingly important role in lead discovery and design 13.

Protein–ligand docking is a key technology for in-silico screening and many protein–ligand docking programs have been reported 14. Molecular docking is a structure-based computational technique is most commonly used in the field of drug design and docking may be applied to: hit identification, lead optimization and Bioremediation 15. The docking algorithms suggest possible structures for molecular complexes. They are used to model biological function and to discover potential ligands 16.

The interaction of a drug molecule with its receptor protein is a complex event encompassing the interplay in entropy and enthalpy of many forces: conformational ﬂexibility and electrostatic, hydrophobic, and van der Waals interactions 17. Since the bioactive conformation of a bound ligand rarely corresponds to the isolated ligand X-ray structure, recent techniques have dealt with the issue of conformational flexibility 18. Considering the importance of protein flexibility on ligand binding, recent research has explored ways of addressing the situation where the ligand and protein are flexible 19. The aim of molecular docking is to achieve an optimized conformation for both the protein and ligand and relative orientation between protein and ligand such that the free energy of the overall system is minimized 20, 21.

Molecular docking computationally screens thousands to millions of organic molecules against protein structures, looking for those with complementary fits 22. Scoring functions are used to estimate the binding affinity of novel structures or an individual molecular fragment in a given position inside the receptor pocket 23. In continuation of the research of molecular modelling, here in this paper we report the docking analysis of 1,3-disubstituted urea derivatives with epoxide hydrolase to explore favourable drug-receptor interaction.

Selection of molecules and dataset:

A set of 40 molecules belonging to the class of urea derivatives reported by 24 was subjected to the docking analysis for their antitubercular activity. All docking studies were performed by the GLIDE module of Schrodinger Maestro 9.5 25, 26. The biological activity of the compounds was reported as IC50values (nM) and converted to pIC50 (LOG 1/ IC50) values. Table 1 shows the structure of all 40 compounds along with their biological activity values.

All the molecules of dataset were sketched in ISIS draw and saved in mol format. The set of molecules were then imported in the Ligprep workflow wizard. The energies of the molecules were the minimised using OPLS_2005.The ionisation was done with epik ioniser at pH 7.0 ± 2.0 and the conformers were generated. This is an automatic preparation process, performed with the LigPrep tool of the Schrödinger package

TABLE 1: STRUCTURE OF THE COMPOUNDS IN THE SERIES ALONG WITH THEIR BIOLOGICAL ACTIVITY

Molecular docking experiments were carried out by means of the Glide, as implemented in the Schrodinger 7. A cubing receptor grid was centered around the co-crystallized ligand where the active binding site is present. The XP (extra precision) scoring function of GLIDE 6.0 was used and lastly the docking job was run. The scoring function of GLIDE docking program is presented in the G-score form. G-score indicates the binding affinity of the designed compound to the receptor/enzyme.

The docking studies were carried out to explore the interaction between inhibitors and the receptor. The final evaluation is done with glide score (docking score) and best pose is generated as the output. The 3D view of epoxide hydrolase (EH) is shown in Fig.1. 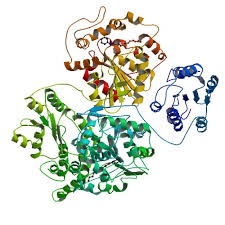 The most active compound in the training set has scored a best docking score value of -8.03. It has formed an interaction with TYR381 and TYR465. The Glide scores and other solutions of protein-ligand complexes obtained from docking calculations for selected compound are listed in Table 2.

TABLE 2: DOCKING SCORES AND OTHER SOLUTIONS OBTAINED FOR THE MOST ACTIVE LIGAND4

The various Glide XP terms used can be described as:

ClBr: Reward for Cl or Br in a hydrophobic environment that pack against Asp or Glu.

The ligand protein interaction in 2D view is shown in Fig.2 and Fig.4 shows the 3D view of docking of ligand into binding pockets of EH. 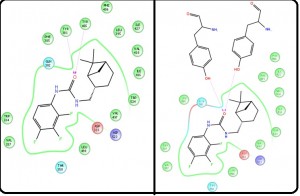 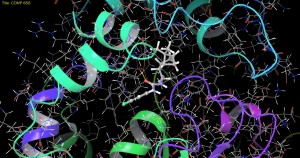 To validate the docking protocol, co-crystallized ligand (CDU: N-CYCLOHEXYL-N'- DECYLUREA) itself was docked into the active site of epoxide hydrolase (1EK2). The Glide scores and other solutions of protein-ligand complexes obtained from docking calculations for selected compound are listed in Table 3.

TABLE 3: DOCKING SCORES AND OTHER SOLUTIONS OBTAINED FOR THE CO-CRYSTALLIZED LIGAND

The ligand protein interaction in 2D view is shown in Fig.3 and Fig.5 shows the 3D view of docking of co-crystallized ligand into binding pockets of EH. 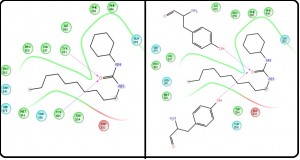 FIG.5: THE BINDING POCKET OF EH (PDB ID: 1EK2) WITH THE CO-CRYSTALLIZED LIGAND OF THE PROTEIN

These studies have opened a path for the development of potent inhibitors with good pharmacokinetic profiles against all Mycobacterium tuberculosis EHs of the α/β type and provided crucial clues and guidance that can be used in the successful designing of novel highly active analogues against epoxide hydrolase enzyme which is widely spread in microorganism.

ACKNOWLEDGEMENT: One of the author wish to acknowledge to the AICTE (All India Council of Technical Education) for granting of the fund for the completion of this project work.