ABSTRACT: The two pure phytochemicals characterized as cis-piperine and trans-piperine isolated from the dried fruits of Piper longum were tested for antihepatotoxic activity at the dose of 50 mg/kg orally respectively, against silymarin as a standard reference. The toxicity was induced by CCl4, and then various biological parameters such as AST, ALT, ALP, SOD, GPx, GSH, total protein, total albumin and total bilirubin were measured at 134.24 IU/L 71.96 IU/L, 375.02 IU/L, 37.02 U/g, 17.02 U/g, 29.12 U/g, 1.95 g/dl, 1.09 g/dl, 4.16 g/dl respectively. The phytochemicals cis-piperine and trans-piperine showed significant antihepatotoxic activity. Both cis-piperine and trans-piperine exhibited antihepatotoxic activity by reducing the increased levels of serum AST by 90.14%, 91.19% ALT by 82.65%, 58.12% and ALP by 97.37%, 92.23% when compared with standard drug silymarin that have decreased AST by 91.64%, ALT by 89.92%, ALP by 94.54%, respectively, and by elevation in the antioxidants SOD, GPx, and GSH) respectively, and total albumin, total protein. The overall experimental results have suggested that the both the isomers of piperine possessed significant antihepatotoxic activity as well as antioxidant effects on the experimental albino male rats of Wistar strain.

Introduction: The liver is the largest glandular organ in the body, and has more functions than any other human organ 1. Liver is considered to be one of the most vital organs that functions as a centre of metabolism of nutrients such as carbohydrates, proteins, lipids and excretion of waste metabolites. Additionally, it is also managing the metabolism and excretion of drugs and other xenobiotics from the body thereby providing protection against foreign substances by detoxifying and eliminating them. The bile secreted by the liver has, among other things, plays an important role in digestion 2.

Liver disease is a global problem. Conventional drugs used in the treatment of liver diseases are sometimes inadequate and can have serious adverse effects 3.

The fruits of Piper longum Linn (Piperaceae) have been used traditionally for the treatment of diseases like jaundice and allergies 4. The dried fruit of Piper longum Linn taste is bitter, hot and pungent and a tonic to the liver 5. Piper longum Linn (Piperaceae), known in India, as “Indian Long Pepper” and pippali. The word “Pepper” is derived from the Sanskrit word 6. P. longum Linn is an indigenous plant of North East India 7. The plant grows in hotter parts of the country and found wild as well as cultivated in Assam, evergreen forests of Western Ghats, southern States, along lower hills of Bengal and west coast of the nation 8. P. longum Linn is a slender aromatic climber with red fruits. This fruit when dried turns grayish black with pungent smell 9. P. longum Linn isa vital component of Indian traditional medicine reported to be used as a remedy for the treatment in gonorrhea, menstrual pain, tuberculosis, sleeping problems, respiratory tract infection, chronic gut-related pain and arthritic conditions 10. Moreover, analgesic and diuretic effects, relaxation of muscle tension, alleviation of anxiety and immunomodulatory and antitumor activity are also reported 6, 11.

The use of medicinal plants in modern medicine suffers from the fact that though hundreds of plants are used in the world to prevent or to cure liver diseases, scientific evidence in terms of modern medicine is lacking in most cases. However today it is necessary to provide scientific proof as whether to justify the use of plant or its active principles 12.

Piperine was the first amide isolated from piper species and was reported to display central nervous system depression, antipyretic, and anti-inflammatory activity. Piperine is a potent inhibitor of the mixed function oxygenase system and non-specific inhibition of P450 isoenzymes 11.

The literature survey has revealed that antihepatotoxic effect mediated to antioxidant effect along with nine different biological parameters (various serum marker enzyme level and antioxidant activity and other biological parameters namely AST, ALT, ALP, SOD, GPx, GSH, total protein, total albumin and total bilirubin) has not yet been measured so far with respect to these nine parameters. We have, therefore, conducted a thorough study for the first time of cis and trans isomers of piperine.

Collection of Plant Material and Other Organic Solvents:

The dried fruits of Piper longum collected from the market Kharibawli; Chandni Chawk, Delhi and authenticated at the Department of Botany, Jamia Hamdard University, New Delhi. All the organic solvents used in experiments were of analytical grade, Silica gel for column chromatography and purchased from Merck, Germany.

Preparation of extracts and different fractions:

Albino male rats of Wistar strain (150 ± 10 g), 4–6-week-old, were obtained from Central Animal House of Hamdard University, New Delhi. They were housed in polypropylene cages in groups of 5 rats per cage and kept in a room maintained at 25±2 °C with a 12-h light/dark cycle. They were allowed to acclimatize for 1 week before the experiments and were given free access to standard laboratory feed (Amrut Laboratory, rat and mice feed, Navmaharashtra Chakan Oil Mills Ltd, Pune, India) and water ad libitum. Approval to perform the animal experiment was obtained from Institutional Animal Ethics Committee (IAEC) registered under the Committee for the Purpose of Control and Supervision of Experimental Animals (173/CPCSEA).

Dosing and Grouping of Animals:

Rats were equally divided into 5 groups with 5 animals in each group (Table 1). The time duration of experiment was 15 days. The treatment of cis and trans-piperine were administered orally for 15 days.

Each animal was anaesthetized with diethyl ether. Heart puncture was done with 5 ml disposable syringe and 2 ml blood was drawn very gently and slowly. The blood collected was shifted immediately to clean dried centrifugation tubes, allowed to clot and serum was separated by centrifugation at 4000 rpm for 10 min. Serum was separated and then preserved in the cuvettes at -20°C in the freezer until analysis. Biochemical estimations were made the following day.

Liver sections taken immediately after dissection from the liver, and then fixed in 10% buffered formalin (Luna, 1986) 21, dehydrated in gradual ethanol (50 to 100%), cleared in xylene, and embedded in paraffin. Sections (4 to 5 µm thick) were prepared and then stained with Haemotoxylin and Eosin (H and E) dye for photomircoscopic observations like cell necrosis, fatty change, hyaline degeneration, ballooning degeneration, infiltration of Kupffer cells and lymphocytes under power 40X and microphotographs were taken using an Olympus BX50 microscope system (Olympus, Japan).

All the values are expressed as mean ± S.E.M. The statistical comparisons were done by using analysis of variance (ANOVA) using Prism graph pad software. Values P < 0.05 were considered as significant.

These assignments were also substantiated further by correlating the proton peaks in COSY experiment and have been presented in Table-2. The high coupling constant of H-5 (dd, J= 3.2, 16.0 Hz) indicated that this is in trans position to H-3 rather than cis as has been seen in case of PL-1. Other spectral data of PL-10 are same as in case of PL-1. Thus, on the basis of above observations the structure of PL-10 was elucidated as trans-5-Benzo-[1, 3]-dioxol-5-yl-1-piperidin-1-yl-penta-2,4-dien-1-one, and has been designated as trans-piperine.

Values are expressed as mean ± S.E.M. (n=5) using ANOVA. CCl4 group showed significant increase in AST, ALT and ALP levels compared to the control group (a, P<0.05 CCl4 vs. control group): P. longum supplementation significantly decreased AST, ALT, and ALP levels in the CCl4+ P. longum groups compared to the CCl4-induced hepatotoxic group (b, P<0.05 CCl4+ P. longum vs. CCl4 group). Values given in parentheses are percent decrease in enzyme activity with respect to toxic group (G-2).     The results of various biochemical parameters revealed the elevation of serum enzyme level and decreased the level of antioxidants and total protein and total albumin in CCl4 treated group, indicating that CCl4 induces damage to the liver. A significant reduction was observed in AST, ALT and ALP levels in the groups treated with both of isolated chemical components of P. longum and silymarin (Table 4).

The results obtained for serum enzyme level have suggested that the groups treated withcis- piperine and trans-piperine of P. longum are comparable with silymarin (Silbyon-70), the standard hepatoprotective drug and our results are also supported with percent decrease of enzyme activity values given in parentheses.

TABLE 5:  EFFECT OF cis-PIPERINE AND trans-PIPERINE SUPPLEMENTATION ON ANTIOXIDANT ENZYMES SUCH AS SOD, GPX AND GSH LEVEL

The antioxidant enzymes SOD, GPx, and GSH can be used to predict the severity of CCl4 induced hepatotoxicity because these enzymes such as SOD, GPx, and GSH dependently act in the metabolic pathways involved in free radicals; as we see in the Table-5 there are a significant lowering in the group treated with CCl4. The cis-piperine and trans-piperine showed significant elevation in SOD, GPx and GSH in some of the groups treated with the isolated isomers of piperine from the dried fruits of P. longum Linn (Table 5).

The histopathological examination of the liver section of the male albino Wistar rats treated with CCl4 showed hepatocytic necrosis and evident vacuolation of hepatocytes. The rats treated with silymarin and cis and trans- piperinealong with toxicant showed sign of protection against toxicants to considerable extent as evident from formation of normal hepatic cards and absence of necrosis and vacuoles cis-piperine and trans-piperine showed a remarkable recovery of hepatic cells, disappearance of necrosis, a mild vacuolation with almost normal central vein (CV) and portal triad (PT) indicating a potent antihepatotoxic activity and supporting the data obtained from the analysis of biochemical parameters (Table7, Fig. 3 -7). 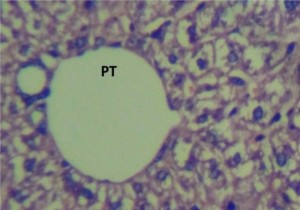 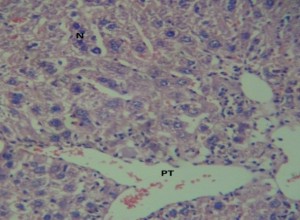 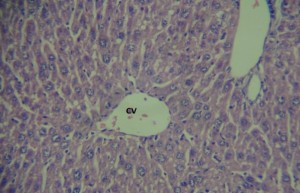 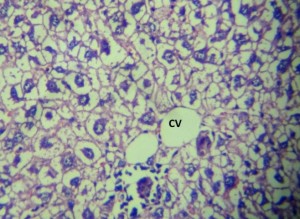 FIGURE 6: LIVER HISTOPATHOLOGY OF ANIMAL TREATED WITH CCL4 AND cis-PIPERINE AT 40X MAGNIFICATION SHOWING MILD VACUOLATION, NECROSIS AND INFLAMMATION AND CV IS NORMAL. 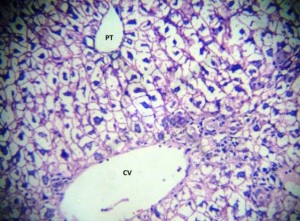 FIGURE 7: LIVER HISTOPATHOLOGY OF ANIMAL TREATED WITH CCL4 AND trans-PIPERINE AT 40 X MAGNIFICATIONS SHOWING MILD VACUOLATION, MODERATE DEGREE OF INFLAMMATION AND NECROSIS AND CV IS NORMAL.

CONCLUSION: Thus, from the above investigation we can say that the cis-piperine and trans-piperine exhibited significant antihepatotoxic activity as well as antioxidant actvity against CCl4 induced hepatotoxicity. This significant antihepatotoxic effect is probably mediated through its significant antioxidant activity. These studies place this medicinal plant a novel agent for bio-prospection and drug development for the treatment of liver disorders using modern methods. Attempts are also bring made to characterize other chemical components of the plant, which are responsible for the antihepatotoxic efficacy as well as antioxidant efficacy of this valuable medicinal plant. Further studies are required to explain exact mechanism of action in neutralizing the toxic effects.