INTRODUCTION: Drospirenone is 6β, 7β, 15β, 16β- dimethylene- 3- oxo- 17α-pregn-4-ene-21, 17 carbolactone. Drospirenone is a synthetic progestin that is an analog to spironolactone. It is present in number of birth control formulations. Drospirenone be different from other synthetic progestins as its pharmacological outline in preclinical studies shows it to be closer to the natural progesterone. As such Drospirenone has anti-mineralocorticoid properties, counteracts the estrogen-stimulated activity of the rennin-angiotensin-aldosterone system, and is not androgenic 1. 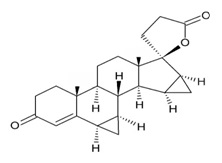 Stability testing is done primarily to provide the evidence that the drug substance or the drug product maintains its essential features of quality, identity, purity, and strength (within acceptable ranges) throughout the time in which it is expected to remain safe for further processing or human consumption. Study of stressed degradation support for the identification of feasible degradants, the inherent stability of the drug molecules, possible degradation pathways, and stability indicated analytical procedure validation. It understands the stability of the molecule support to select the appropriate formulation and package and provide standard storage and shelf life conditions, which is essential for regulatory documentation 2-5.

Chemicals and Reagents: Drospirenone was supplied as a gift sample by Swapnroop drugs and pharmaceuticals, Aurangabad, Maharashtra, India. Methanol, Acetonitrile, Ammonium acetate, double distilled water was purchased from Merk, India. All other chemicals and materials used are of analytical grade.

Selection of Chromatographic Conditions: The selection of the HPLC method depends upon the character of the sample, its molecular weight, and solubility. The chromatographic variables such as mobile phase, flow rate, and solvent ratio were studied. The resultant chromatograms were recorded, and the chromatographic parameters such as asymmetry, selectivity, and sensitivity were selected for estimation.

Optimization of Chromatographic Parameters: Optimization in HPLC is the process of finding a set of conditions that adequately analyze the quantification of the analyte with acceptable accuracy, precision, sensitivity, specificity, cost, ease, and speed of analysis.

Optimization of Mobile Phase: For the selection of the mobile phase, several modifications, including change in compositions of mobile phase and column temperature modification, were tried, but the resolution was not found to be satisfactory. Finally, the mobile phase contains ammonium acetate: Acetonitrile (70:30) pH 6.8-7.2 found to give the best resolution. Previous to analysis; the mobile phase was filtered through a 0.45µ nylon filter, and then degassed ultrasonically for 15 min.

Selection of Internal Standard: After observing the retention behavior of several drugs, Estradiol was selected as an internal standard. It was found to give good resolution, accuracy, and precision of quantitative results.

Preparation of Standard Drug Solutions: Accurately 0.48 mg/ml Drospirenone solution in methanol was prepared and sonicate till achieve complete solubility of Drospirenone. Further pipette out 5 ml (2.4 mg/ml) of stock solution of Drospirenone (0.24 mg/ml). Appropriate aliquots of the standard stock solution were transferred into a series of volumetric flask for further dilutions of 10, 20, 30, 40, 50, 60 mcg/ml.

Preparation of Sample Drug Solution: Tablets of the marketed sample (Crisanta from Cipla, 3 mg/tablet) was transfer into a 50 ml of the volumetric flask; 25 ml of methanol was added, sonicate it for 10 minutes for getting 100% solubility and made up volume with methanol (stock solution). Stock solution was used for further readings.

Chromatographic Run: Stock standard solutions of above dilutions were filled in Auto sampler unit of Thermo RP-HPLC after optimization.

Sample Preparations: Forced degradation study of the Drospirenone was conducted as per ICH guidelines. For stressed condition of the drug, four samples were generated.

Oxidative Degradation: The oxidative degradation was performed by mixing 2 ml of standard Drospirenone solution and 8 ml of 1% or 3% hydrogen peroxide were transferred to a 10 ml volumetric flask and kept at room temperature or 80 ºC.

Postulation Profile of Forced Degradation Products of Drospirenone: None of the degradation product could be isolated from the reaction solutions by solvent extraction or crystallisation.

Hence, key stress oxidative solutions were subjected to LC-MS analysis for profiling and identification of the degradation products. LC-MS was utilised to obtain the molecular weight and fragmentation information using ESI interface in the positive ion mode.

The key stress samples were treated to remove mobile phase matrices and other interferences before LC-MS analysis.

Composition of LC-MS unstressed drug spectrum with spectral scan of key stress solutions will lead to profiling the impurities and degradation products that may have formed during stress.

Sample Preparation for LC-MS Studies: 3% of H2O2 was added to a solution of Drospirenone (500ug/ml standard Drospirenone in methanol) in proportion of 1:1. The reaction mixture was kept in dark to avoid photo- oxidation effects and maintained at room temperature. After the reaction the solution was heated carefully for 10 min in water bath to eliminate excess of peroxide and arrest further degradation. The oxidative key stress solution was cooled and later diluted and assessed for LC-MS study.

Preparation of Mobile Phase: After trial of several mobile phases, mobile phase was prepared by mixing ammonium acetate: acetonitrile in the ratio of (70:30) pH 6.8-7.2 and was filtered and degassed.

Linearity: The calibration curve with six concentration points for Drospirenone was sufficiently linear in the concentration range between 10-60 ug/ml. The linear least-square regression equation was y = 8456.x + 48894 with correlation coefficient 0.987 Fig. 1, 2 and Table 1. 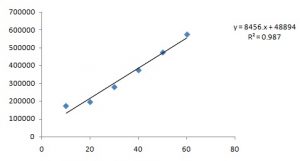 System Suitability Parameters: System suitability parameters were analyzed on the freshly prepared standard stock solution of Drospirenone; the drug was injected into the chromatographic system under the optimization of chromatographic conditions Table 2.

Accuracy and Precision: Precision of the assay was determined in relation to repeatability (intraday) and intermediate precision (Interday) at three levels of concentration. The CV values for the within-day and between-day were less than 1.4% (Standard as per ICH), which confirms the proposed method is precise. There is no change after a day difference.

Robustness: Robustness of the proposed method was performed by deliberately changing chromato-graphic conditions; the effect of pH variation (±0.2) and also mobile phase composition (±2 ml) was studied on chromatographic parameters. The variations did not have a significant effect on the chromatographic resolution

Analysis of Pharmaceutical Product: The proposed HPLC method was applied for the determination of Drospirenone in tablets. Drospirenone amount was shown to be 3.05 ± 0.01 mg which is in agreement with the labeled amount (3.00 mg).

Recovery: The % recovery was calculated with a standard addition method. The acquire recovery was 100.5 ± 0.5 as well as no interferences were observed due to excipients at the retention time of Drospirenone.

Oxidative Degradation: Drospirenone was found to degrade in 1% H2O2 to the extent of 19% after 1 h. More degradation was observed by using 3% H2O2 at room temperature or 80 ºC Fig. 3 and Table 3. 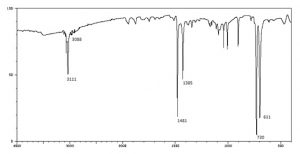 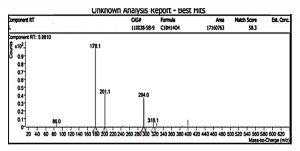 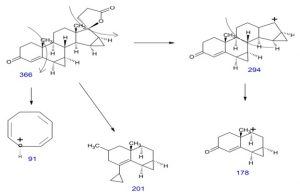 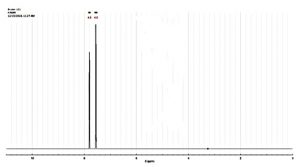 Discussion of Postulation Profile of Forced Degradation Product of Drospirenone: Taking in to account that the typical impurity tolerance level generally ranges between 0.1% to 1.0% and that identification of impurities lower than the 0.1% level was not considered to be necessary unless the potential impurities are likely to be strangely potent or toxic. The stress studies of Drospirenone revealed the presence of forced degradation products above the identification threshold limit; hence it was essential to identify the potential forced degradants in the stress samples using hyphenated techniques similar to LC-MS. The complete LC-MS spectral scan for Drospirenone stressed samples are given in Fig. 5.

ETHICAL APPROVAL: This article does not contain any studies with human participants or animals performed by any of the authors.