STUDIES OF DRUG-POLYMER INTERACTIONS OF SIMVASTATIN WITH VARIOUS POLYMERS

STUDIES OF DRUG-POLYMER INTERACTIONS OF SIMVASTATIN WITH VARIOUS POLYMERS

ABSTRACT:The purpose of the present study is to prepare different combinations of drug Simvastatin (SV) with different polymers like Sodium alginate (SA), Hydroxypropylmethylcellulose (HPMC), Pectin (P), Dillenia (D) and Hydroxy propyl β- cyclodextrin. (HPC), thereby determine and report any possible interactions between the drug Simvastatin (SV) and various polymers both from natural and synthetic sources. The natural plant fruit seed mucilage Dillenia(D) was extracted from the plant Dillenia indica ,Family Dilleniaceae and was dried. Individual polymers and their combinations with drug SV were tested analytically and comparison of the results was done to find out any interactions. The analytical techniques used for the purpose are Fourier Transform Infrared Spectroscopy (FTIR) and Thermogravimetric analysis (TGA). The techniques of FTIR and TGA serves as a good means for determination of any interactions as the change in characteristics of the drug peak and its melting point can be detected by the two techniques respectively.  From the study it was Simvastatin when complexed with Hydroxy propyl beta cyclodextrin (HP) showed some changes but these changes were not because of the other polymers used in the combination process.

INTRODUCTION:Simvastatin is a cholesterol lowering agent that is derived synthetically from a fermentation product of Aspergills terreus1 and is widely used to treat hypercholesterolemia. The drug is an inactive lactone and is converted to corresponding β, δ-dihydroxy acid in liver by cytochrome P450 (CYP) 3A after oral administration 2, 3. The drug (SV) is practically insoluble in water and poorly absorbed from the gastro intestinal (GI) tract 4, 5.

Before formulation of the drug in any delivery systems, several methods like use of solid dispersion 6, 7, use of complexing agents 8 are tried to increase the solubility of the drug (SV) in water.  Previously it was reported that SV forms inclusion complexes with HydroxylPropyl β- Cyclodextrin (HP) 8 thereby increasing the solubility of SV in water and this is confirmed here in the present study by use of phase solubility studies.

In the present study, physical mixtures of the drug (SV) in solid form along with a series of polymers of both natural and synthetic origin were prepared and they were analyzed by using Fourier Transform Infrared (FTIR) spectroscopy and Thermogravimetric analysis (TGA), to characterize any polymer-polymer, drug-polymer interactions. The natural substance was obtained from the seeds of the fruit of Dillenia indica Linn. (Family-Dilleniaceae)named as “Dillenia”. This study is done so that future formulations can be prepared based on these results.

Study of the Physical Mixtures (PM) by use of analytical techniques: The prepared physical mixtures as well as the individual polymers were studied for any drug-polymer, polymer-polymer incompatibility by using Fourier Transform Infrared (FTIR) spectroscopy (SHIMADZU, IR PRESTIGE -21) 9, Thermogravimetric analysis (TGA) 10 by using Perkin Elmer, Sll, Pyris Diamond, TG/DTA Instrument (with sample weighing about 14mg and a programmed heating of samples were done at a rate of 20oC/Min with temperatures staring from 10oC to 500oC ) various plots were recorded. 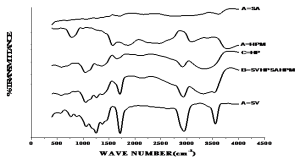 CONCLUSION: Thus it is confirmed from the above studies, that the drug Simvastatin (SV), shows weak interactions with HydroxyPropyl β-Cyclodextrin (HPC) but other polymers like Pectin, HPMC LV E-15, Dillenia, and Sodium Alginate has no role in any interactions with the pure drug SV. Thus, it is concluded that the drug Simvastatin (SV) can be formulated with all the above mentioned polymers in various drug delivery systems.

ACKNOWLEDGEMENT: The authors are grateful to Shubhranshu Sengupta and Sanjay Swain for their contributions in writing this paper.