ABSTRACT: Chemical protection plays a decisive role in the resistance of plants against various pathogens and their spore germination. The so-called secondary metabolites which are a characteristic feature of plants and are important to protect plants against a wide variety of microorganisms including fungi. In order to this, the present study was carried out to evaluate the antifungal potential of Bryum cellulare aqueous and ethanolic crude extracts against percentage inhibition of spore germination and hyphal length of test fungi Curvularia lunata, the causal organism of leaf spot of Zea mays. The preliminary tests showed that flavanoid, sterols and terpenoids etc are present in the test plant. Further various concentrations of crude extracts of aqueous and ethanolic form were tested against spore germination and hyphal length of C.lunata through hanging drop method. The results showed that all the extracts posses a significant antifungal potential but highest inhibition of percentage in spore germination was observed in ethanolic extract of B.cellulare. The percentage of spore germination was 60.43 and 15.20 in 10 and 100 per cent concentration of the extract respectively in comparison to control i.e. 110.46 per cent. In aqueous it was 85.13 and 33.26 in 10 and 100 per cent concentration in comparison to its respective control.

INTRODUCTION: Bryophytes are considered as a ‘remarkable reservoir’ of novel natural products or secondary metabolites, which have shown interesting biological activity and could be used in medicine. Bryophytes especially mosses and liverworts are the source of man biologically active novel compounds pertaining to pharmaceutical uses 1-4. The occurrence of antibiotic substances in bryophytes have been well documented by botanists and microbiologists 5. They possess compounds such as alkaloids (clavatoxine, clavatine, nicotine, lycopodine) polyphenolic acids (dihydrocaffeic) and flavonoids (apigenin, triterpenes etc.) but only few of the species have yet been thoroughly studied.

Recently, public demand of plant base medicine and rise of antibiotic resistant bacteria have motivated biologists to look for new plant based natural products. Therefore, bryophytes can be a promising source of many new biologically active compounds in nature. Apart from the medicinal properties, bryophytes are important component of ecosystem diversity and adds up to the species richness 6, 7, 8 and also increases the plant biomass in forests in some cases 9.  Further, bryophytes are important environmental indicators and have been used as predictors of past climate change to validate climate models and potential indicators of global warming 10. They play a chief role in ecosystem functions, such as soil development, nutrient biogeochemical cycling, water retention, plant colonization seed germination, seedling growth, and forest renovation 11.

Deora et al.12 carried out the studies on antibacterial effect of aqueous crude extract of Plagiochasma articulatun, Anthoceros longii, Fissidens bryoides; liverwort, hornwort and moss respectively for their antibiotic effect on Agrobacterium tumifacians and reported that mosses are highly antibiotic in nature followed by hornwort and liverworts. The aim of the present study was to find out the antifungal acitivity of Bryum cellulare against spore germination of phytopathogenic fungi Curvularia lunata. Phytochemical screening of different extract will also carried out to detect the presence of secondary metabolites.

The moss Bryum cellulare was collected in rainy season (2013) from Mt. Abu, Distt. Sirohi (Raj.) around Nakki Lake, Guru Shikhar and Sunset point in both vegetative and sporophytic phases. Both plants were washed with distilled water to remove soil particles, attached litter, dead material. For ethanolic extract preparation, plant material weighted was grinded in mortar and pestle with equal amount of ethanol till the formation of fine paste, then it was centrifuged and filtered. This filtrate was used as (100%) crude extract then it was serially diluted by double distilled water to prepare various concentrations from 10-100 per cent. The same method was adopted for aqueous extract preparation except grinding the plant material with water instead of ethanol.

The test fungi Curvularia lunata (MTCC No.283) was obtained from the Institute of Microbial Technology, Chandigarh, India and sub-cultured in laboratory at 30ºC temperature to obtain its pure isolate.

Fungal spores of the test fungi were bioassayed against the extracts on cavity slides by hanging drop method13. Hyphal length was measured after 8 hrs. of inoculation using Ocular-micrometer14 under Compound Microscope. Percentage of spore germination was counted under light microscope after 24 hrs of incubation.

Phytochemical Analysis: Phytochemical analysis of moss Bryum cellulare extract was done by the methods of Trease and Evans 15 to detect the presence or absence of certain bioactive compounds.

The activity of different solvent extracts was in order of ethanolic> aqueous as the bioactive compounds are more soluble in organic solvents. The present results showed similarity with the results of Deora et al.,16 who determined the antifungal activity of a moss against certain phytopathogenic fungi. Deora and Suhalka 17 studied the effect of liverwort R.gangetica against F.moniliforme and found cold water extract was more effective than boiled water extract. Bodade et al, 18 evaluate the antimicrobial efffect of Plagiochasma appendiculatum, Thuidium cymbifolium, Bryum cellulare, Bryum argentium and Racomitrium crispulum on 12 microorganism. 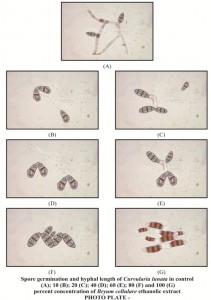 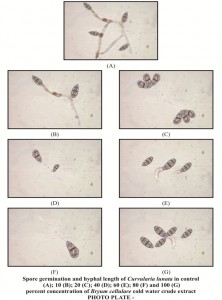 CONCLUSION: From the present study it was concluded that spore germination and hyphal length at higher concentration suggests that some antifungal potent chemicals are present in Bryum cellulare which have inhibited the growth. Further this study will also unlock the naturally occurring antifungal phytochemicals in this moss which can be further used as biocontrol agents against plant diseases.

ACKNOWLEGMENT: The authors are thankful to Principal and Head- Department of Botany, Faculty of Science, B.N.P.G College Udaipur (Raj), for providing necessary facilities.