ABSTRACT: The desire of the present study was to investigate in-vitro antimicrobial activity on different crude extracts of Ziziphus rugosa pericarp. The antibacterial assay was carried out against Bacillus subtilis MTCC 1133, Staphylococcus aureus MTCC 7443, Escherichia coli MTCC 1692 and Salmonella typhi ATCC 19430. Meanwhile, Candida albicans ATCC 18804, Aspergillus niger ATCC 16404, Trichoderma harzianum MTCC 3832 and Polyporus rubidus MTCC 140 were used for the antifungal assay. Both activities were carried out by cup plate method using 100, 200, and 300mg/ml of hexane, ethanol, and aqueous extracts. The hexane extract showed MIC at 100 mg/ml for B. subtilis, 60 mg/ml for S. aureus and S. typhi, and 80 mg/ml for E. coli. The ethanolic extract showed 80 mg/ml for all tested organisms. The aqueous extract showed 80, 40, 60, and 100 mg/ml for B. subtilis, S. aureus, E. coli, and S. typhi, respectively. Among the extracts, aqueous extracts showed highest level activity against both gm +ve (B. subtilis 26mm) and gm -ve (S. typhi 24mm) at 300 mg/ml. Regarding antifungal activity, all the extracts at all the concentrations formed a similar zone of inhibition against A. niger. Therefore, the awesome constituents in the plant would solve some infectious as well as nutritional deficiency diseases.

INTRODUCTION: Plant constituents perform their role either at the molecular or cellular level. They show antibacterial, antiviral, neuro-degenerative and other activities 1. The tribal and rural community of Sata Pokhran use medicinal plants to treat a wide spectrum of human ailments 2. The residents of Keffi in north central Nigeria use about 40 plant species to treat skin diseases. They view herbal treatments as more effective and cheaper when compared to orthodox medicine 3.

Because of antimicrobial resistance, 10 million people will stop living every year by 2050, if not a global response to the problem of antimicrobial resistance (AMR) is increased 4. The plant Ziziphus rugosa belongs to the family Rhamnaceae. It occurs in all forest districts. It grows up to 6,000 ft in the Western Ghats and also in dry deciduous forests. It is a large straggling thorny shrub. Thorns usually solitary and recurved. Wood is moderately hard and reddish. Leaves large elliptic usually cordate. Flowers paniculate, petals absent, styles - 2, fruits small and single-celled drupe 5.

It is a famine edible fruit and medicinal plant of the Western Ghats. The deseeded pulp is the source for preparation of dosa and juice. It contains macro, micronutrients and low toxic elements 6.

The folk medicinal healers of Sylhet and Moulvibazar district use Z. rugosa fruit to treat tumors or cancers. Besides, they use it for sedative, hepatoprotective, blood purifier, and cardiotonic. They take one teaspoon of fruit powder orally with one cup of hot water twice a day 7. The local people and traditional healers of Thalamalai hills, Vadavathur village in Namakkal district, use the bark of Z. rugosa in the form of powder to treat ulcer, skin disease and cough 8. The Kanikkar of Agasthiarmalai Biosphere Reserve applies paste from one handful of leaves of Z. rugosa (before the morning bath) externally to treat scabies and ringworm infection 9. The root of this plant possesses antibacterial and antifungal efficacy 10. The pericarp exhibits antibacterial, insecticidal, and free radical scavenging assay 11. Therefore, the present study aims to investigate antimicrobial activity of different solvent extracts of Z. rugosa Lam. pericarp.

Collection of Material: For the research purpose, the plant Ziziphus rugosa Lam. showed in Fig. 1 was collected with f1owers and fruits at Sokkalapuram near Pallapatti, Karur district during June 2017. It was identified and authenticated at Botanical Survey of India, Coimbatore. The voucher specimen of the plant refers the No. BSI/SRC/5/23/2017/Tech.570. 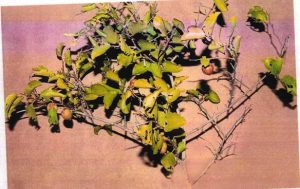 Preparation of Extract: The hexane and ethanolic extracts were prepared with the aid of the previous literature method 12 with some changes. The aqueous extract was prepared by maceration method. To make these successive solvent extracts, 70 gm of processed pericarp was packed and kept in the Soxhlet apparatus. It was subjected to continuous hot extraction first with 700 ml of 95% hexane at a suitable temperature until the solvent in the siphon became colorless. Then the extract was collected in China dish. The collected and air dried marc was extracted with 700 ml of 99.9% ethanol at a suitable boiling point until the solvent became clear. Finally, extracted the same dried marc with 400 ml of distilled water at 20-100 ºC by maceration method for an hour. To get the pure extract, filtered the macerated extract primarily by cotton cloth and followed by muslin cloth. To remove the solvent from the extracts, they were concentrated and dried in air.

Microorganisms used for this Study:

Preparation of Test Inocula for Bacteria: One loopful of each bacterial strain was transferred into sterile nutrient broth in Laminar air flow chamber using sterilized Pasteur loop (3 mm diameter). These slants were incubated at 37 ºC for 24 h which showed sufficient growth organism in the broth.

Preparation of Test Inocula for Fungi: One loopful of each selected fungal strain was transferred into sterilized Sabouraud’s agar medium in the Petri plate individually by streaking technology. These plates were incubated at 25 ºC for seven days.

Minimum Inhibitory Concentration (MIC): The MIC of different crude extracts of Z. rugosa was determined by liquid dilution method 13. A series of test tubes containing 5ml of sterile nutrient broth medium (which labeled as 20, 40, 60, 80, 100 mg/ml, blank and negative control) were placed in the test tube stands. Then 50 µl of test organism was transferred, followed that the respective concentration of the extract was added under Laminar airflow chamber. They were mixed well and incubated at 37 ºC for 24 h. These test tubes were examined carefully, and the result was recorded based on the turbidity.

Assay of Antibacterial Activity: The antibacterial activity of different extracts (hexane, ethanol and aqueous) of Z. rugosa was evaluated by cup plate method 13 (diffusion plate technique) for 100, 200 and 300 mg/ml dilutions. To the test tube containing 30 ml of molten agar medium at 45 ºC, 0.5 ml of standard bacterial inoculum (24 h broth culture) was added. This inoculated agar medium was transferred to Petri plates by pour plate technique. The plates were rotated gently and allowed to solidification under Laminar airflow chamber. Four wells were bored with the help of (5 mm diameter) sterile borer in all the plates aseptically. Out of 4 wells, three wells were filled with the respective concentrations of drug extract. The rest well was filled with norfloxacin (positive control). The plates were kept in the refrigerator for 30 min. This facilitates the even diffusion of extract into the agar medium. The plates were incubated at 37 ºC in an upright position for 24 h. The clear zone around each cup was measured using scale.

Assay of Antifungal Activity: The antifungal activity of different extracts (hexane, ethanol and aqueous) of Z. rugosa was tested against the fungal strains (Candida albicans ATCC 18804, Aspergillus niger ATCC 16404, Trichoderma harzianum MTCC 3832 and Polyporus rubidus MTCC 140) by diffusion plate method 13. To prepare the seeded Sabouraud’s Dextrose Agar (SDA) plates, 30 ml of sterilized SDA medium was poured into each sterile plate. After solidification, each plate was swabbed with respective inoculum by using cotton buds. Four wells (5 mm diameter) were bored using sterile borer in all the plates aseptically. Out of four wells, three wells were injected with 15 µl of respective concentration of extracts. The rest well was injected with 15 µl of standard drug fluconazole (positive control). After charging them, the plates were kept in the refrigerator for 30 min. After that, the plates were kept at 25 ºC in BOD incubator for three days. As usual, the clear zone around each cup was measured using scale.

RESULT: The results for the MIC of different crude extracts are showed in Table 1 and Fig. 2. The hexane extract showed 100 mg/ml for Bacillus subtilis, 60 mg/ml for Staphylococcus aureus and Salmonella typhi, and 80 mg/ml for Escherichia coli. The MIC of the ethanolic extract revealed 80 mg/ml against all the tested microorganisms. The aqueous extract showed 80, 40, 60, and 100 mg/ml for Bacillus subtilis, Staphylococcus aureus, Escherichia coli, and Salmonella typhi respectively. 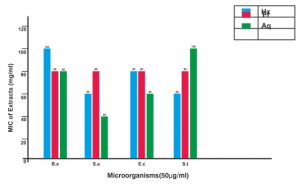 The results for antibacterial activity of hexane, ethanol, and aqueous extracts are showed in Plate 1, 2 and 3, Table 2 and Fig. 3. 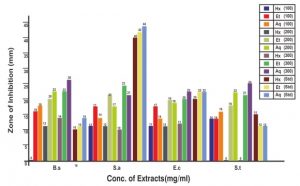 Antifungal Activity: The results for antifungal activity of hexane, ethanol, and aqueous extracts are shown in Plate 4, 5, and 6, Table 3, and Fig. 4. All the extracts at all the concentrations formed a similar zone of inhibition against Aspergillus niger showed in Plate 4b, 5b, and 6b.

The ethanolic extract at all the concentration also formed similar and almost similar zone against Candida albicans, and Polyporus rubidus respectively showed in Plate 5a and 5d. 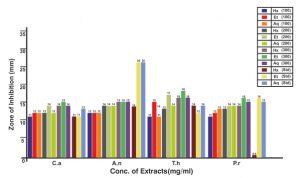 DISCUSSION: The hexane extract of Z. rugosa shows MIC at 100 mg/ml for Bacillus subtilis, 60mg/ml for S. aureus and S. typhi, and 80 mg/ml for E. coli. The n-hexane and Etoac fractions of aerial parts of Z. jujuba showed MIC at low values against S. typhi 14. Among the extracts, aqueous extract only shows the MIC at 40 mg/ml against S. aureus. Besides, this extract at 60 mg/ml shows MIC for E. coli. The hexane extract at 100 mg/ml shows no activity against Bacillus subtilis and forms 11 mm zone against E. coli. This is more or less coincide to results of Z. jujuba, Z. mauritiana and Z. nummularia fruits 15.

Among the bacterial strains Bacillus subtilis is the most sensitive bacterium for both ethanolic and aqueous extracts. The methanolic crude pulp extract of Z. mauritiana at 25µg/ml did not form zone against Bacillus subtilis, S. aureus and E. coli except S. typhi. But n-hexane fraction revealed nothing upto 100 mg/ml except Bacillus subtilis 16. Regarding the extracts the aqueous extract shows potent antibacterial activity against both gm +ve and gm -ve bacteria. This similar result also observed in 50% aqueous-ethanol extract of Z. jujuba seed 17. The hexane extract at 200 and 300 mg/ml reveal no inhibition against S. typhi.

But this extract exhibits higher activity against the fungal strains C. albicans, A. niger and P. rubidus. Among the fungal strains, T. harzianum is most sensitive to all the extracts. Both ethanol and methanol leaf extract of Z. mauritiana at higher concentration formed greater zone against Trichoderma viride when compared to Candida albicans. When compared to methanol extract, the ethanolic extract possessed potential activity 18. All the extracts at all the concentrations show a similar zone of inhibition against A. niger. When compared to fluconazole, all the extracts exhibit more or less similar or wider zone against C. albicans, T. harzianum and P. rubidus. The ethanolic crude extract of Z. jujuba fruit exhibited efficient activity against C. albicans and A. fumigatus 19. The chloroform and methanol extract of Z. rugosa bark revealed good inhibition against S. typhi. When compared to methanol extract the chloroform leaf extract of Z. rugosa nothing revealed against S. typhi. Likewise, chloroform bark and leaves of Z.oenoplia also nothing revealed against S. typhi. But methanolic bark extract of Z. oenoplia did not show that much activity against the fungal strains 20.

CONCLUSION: From this study, it is inferred that the aqueous pericarp extract of Z. rugosa exhibits efficient antibacterial activity against both g+ and g- organisms. The ethanolic extract possesses highest antifungal activity followed by aqueous and hexane. All the extracts at all the concentrations formed similar zone against A. niger. The ethanolic extract at all the concentrations formed a similar zone against both A. niger and C. albicans.

Therefore, the awesome chemical constituents present in the pericarp of Z. rugosa would help to solve some infectious as well as nutritional deficiency diseases.

ACKNOWLEDGEMENT: The authors thank the Principal, J. K. K. Nattraja College of Pharmacy, for availing the facilities to complete this study.