INTRODUCTION: Pleurotus species is one of the choice edible mushrooms which can be cultivated in many countries in the subtropical and temperate zones. Generally Pleurotus is referred to as ‘oyster mushroom’ over the world while in China it is known as Abalone mushroom’ and ‘Dhingri’ in India. Pleurotus species have been used by the people in all over the world for their nutritional value, medicinal properties and other beneficial effects 1.

The fruiting body of the mushroom is also a potential source of lignin and phenol degrading enzymes 2.Both fruiting body and the mycelium of this mushroom contain compounds with wide-ranging antimicrobial activity and their compounds could be isolated from many mushrooms species and could be of benefit for human.

Sample Collection: The mushroom (P. florida) was obtained from Agalya mushroom foundation, Solinganallur, Chennai. It was dried at 45 -50ºC for 48 h. the dried mushroom was finely ground and kept in a freezer at -20ºC until use.

Preparation of Mushroom Extract: 10g of dried finely crushed mushrooms were extracted for 24 hour in 100 ml of methanol, ethanol, chloroform, and di- ethyl ether at room temperature under dark condition. The extraction was twice repeated, the extracts were filtered through glass funnel and Whatman No.1 filter paper. Each filtrate was concentrated   to dryness under reduced.

Antibacterial Assay:  The bioassay was carried out using the agar disc diffusion method with paper disc of 6mm diameter prepared from Whattman No. 1 filter papers The bacterial inoculation were grown in nutrient broth over night and a fixed volume inoculated into 10ml aliquots of nutrient agar mixed and then poured over a nutrient agar base in sterile petridishes. This formed the bacterial lawn. The paper discs of 6mm diameter soaked in 6 micro liter of crude extract and placed on the bacteria lawn after it had solidified. Standard antibiotic discs were used for control.  The zones of inhibitions were measured after the 24 hrs incubation and were recorded in mm.

Antifungal Assay: Young fungal cultures were incubated for 2-3 days at room temperature and seeded on Czapex Dox agar plates for bioassay by disc diffusion method. Whattman No. 1 filter paper disc of 6mm containing the crude extracts were placed on the surface of the plates. After 72-h at 30ºC, the plates were observed for the presences of inhibition zones.

Minimum Inhibitory Assay: Dilution assays are standard method used to compare the inhibition efficiency of the antimicrobial agents. The crude extracts are mixed with suitable media that been inoculated with the test microorganism. 5ml of the Nutrient broth, 0.1ml of the 24 hrs growing bacterial cultures and the different concentration (25 – 100 µg/ml) of the drug were inoculated. 0.1ml of the 24 hrs growing bacterial culture was inoculated in 5ml of the Nutrient broth used as control group. The tubes were incubated at 37ºC for 24hrs. After the incubation, optical densities of bacterial culture in each tube were measured in UV- Visible Spectrophotometer at 600nm. The percentages of viable cells were calculated using the following formula. % viable cells = control OD- test OD/ Control OD× 100.

Determination of Total Phenolics:   The amount of total phenolics in the extracts was determination by the modified Folin- ciocatleu method Wolfe et al16. An aliquot of the extracts was mixed with 5ml F-ciocalteu reagent (previously diluted with 1:10 v/v) and 4ml (75g/1) of sodium carbonate. The tubes were vortexed for 15 sec and allowed to stand for 30 min at 40cfor color development. Absorbance was then measured at 765nm using the Perkin Elmer Lamda 25 UV- spectrophotometer.

Samples from extract were evaluated at a final concentration of 0.1mg/ml. Total phenolics content was expressed as mg/g gallic acid equivalent.

Total Antioxidant Activity:  Total antioxidant activities of crude extracts were determined according to the method of Prieto et al., 17. Briefly 0.3 ml of samples was mixed with 0.3 ml reagent solution (0.6m sulphuric acid, 28 mM sodium phosphate and 4mM ammonium molybdate). Reaction mixture was incubated at 95c for 90 min under water bath. Absorbance of all the sample mixture was measured at 695nm. Total antioxidant activity is expressed as the number of equivalence of ascorbic acid.

DPPH Radical- Scavenging Activity: The scavenging effect of samples for DPPH radical were monitored according to the method of Yen and Chen18. Briefly, a 2.0 ml of aliquot of test sample was added 2.0ml of 0.16mm DPPH methanolic solution. The mixture was vortexed for 1min and then left to stand at room temperature for 30min in the dark and its absorbance was read at 517nm. Synthetic antioxidant, Gallic acid and ascorbic acid were used as positive controls. The ability to scavenge the DPPH radical was calculated using the formula, Radical scavenging effect (%) = Ab- As / Ab× 100 Where, Ab = Absorbance of blank, As = Absorbance of Sample.

RESULTS AND DISCUSSION: The oyster mushroom P. florida was purchased from Agalya mushroom foundation, Chennai. This was extracted by using four different solvents like ethanol, methanol, chloroform and ethyl acetate and screened for its antimicrobial and antioxidant activity (fig. 1).

Antibacterial Activity of Different P. florida Extracts: The antibacterial activity of different extract of P. florida was tested against 8 human bacterial pathogens such as E. coli, S. typhi, K. pneumoniae, V. parahaemolyticus, K. oxytoca, P. murabilus, V. cholarae and Streptococcus sp. The specific zone of inhibition against various types of pathogenic bacteria was shown in Fig.2. Among these, the ethanol extract was more effective against bacteria. The maximum antibacterial activity of ethanol extract of P. florida was found at 23 mm against Streptococcus sp and minimum 4mm against
V.  parahaemolyticus. Minimum antibacterial was observed in chloroform extracts. This showed activity (11mm) against E. coli and there was no activity found against V. cholarae. This is more or less similar with the results of Akyuz and Kirbag 19 reported the ethanol extracts of P. eryngii showed activity against B. megaterium, M. Luteus, K. pneumonia, P. denitrificans and S. aureus in different ratios. This may be the indication of the broad spectrum of antibiotic compounds present in the mushrooms due to the use of different solvents and test organisms. The antibacterial activity of mushroom sample varied according to the solvents. 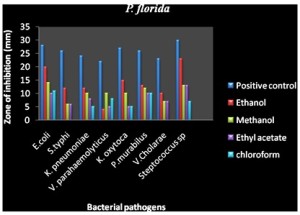 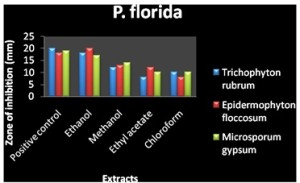 Similar antimicrobial activities were reported by Iwalokun et al., 20 ; Lacobellies et al., 21; Nwachukwu and Uzoeto 22; Westh et al., 23. This possibly indicated that the extracts possessed substances that can inhibit the growth of some microorganisms 24.

The extracts of various mushrooms inhibited the growth of some microorganisms at different ratios. Different mushroom species posses different constituents and in different concentration, which account for the differential antimicrobial effect as suggested.

This is correlated to the results of Gbolagade and Fasidi 25 observed that least minimum inhibitory value (1.25mg/ml) was obtained in C. occidentalis against E. coli. This was followed by T. lobayensis with 2.0mg/ml against the same bacterium. It was also revealed that MIC of the mushroom extract against the test fungi such as A. niger, A. flavus, C. albicans, M. boulardii and T. concentrum were high.

Danielli 26 suggested that at the lowest MIC, the extract will still effective because of the presence of bioactive compounds. Therefore higher concentration, which may consequently poison host cell, may not be required. 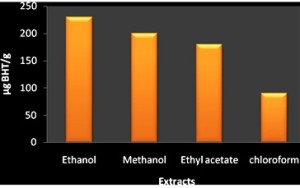 This was more or less similar with the result of Imran et al., 27  estimated the total phenolic content of P. florida and P. eous as 3.125 mg GAE/gm of dry extract and 2.725 mg GAE/gm of dry extract. The content of total phenols was higher for P. florida than that for P. eous extract. Higher extraction yields of phenolics were noted with increased polarity. Low level of phenolics noticed in the present study might be due the solvent. It is reported that the polarity of the extraction solvent affect the level of phenolics 28, 29. 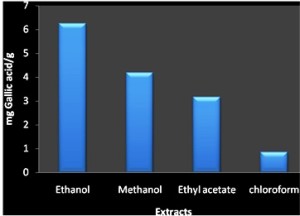 Shahidi and Wanasundra 32  indicated that the acetone extract possessed good activity, whereas the methanol and hot water extracts showed moderate and poor activity, respectively, at the concentration tested. The variation may be attributed to differences in the concentrations of the antioxidant compounds because of the solvent used for the extraction. 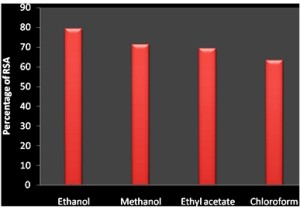 CONCLUSION: The extract of P. florida used in this study, which was inhibited some medicinally important microorganisms and contain significant amount of antioxidant activity. Present finding encourages their use in human diets, which in turn might serve as protective agents to reduce oxidative damage and microbial diseases.

Further researches are needed to be conducted in order to analyze the active substances in details and chemical characteristics of the antioxidative components.

ACKNOWLEDGEMENTS: Authors are thankful to Prof. T. Balasubramanian, Dean, Faculty of Marine Sciences and the authorities of Annamalai University for providing necessary facilities and University Grants Commission, Govt. of India, New Delhi for financial support (Grant no: 39-182/2010) to carry out this work.