INTRODUCTION: Calamintha officinalis (Moench) is a plant species belonging to the family Lamiaceae, similar to the common mints not only regarding its morphology but also in regard to its scent characteristics. This has led to it being used popularly as a substitute for the official mints in various beverages. Although similar pharmacological properties between these species could be speculated, in so far as we know the literature cites only chemical data regarding C. officinalis and other related species 1, 2, 3.

A peptic ulcer in the stomach is called a gas­tric ulcer (fig. 1). One that occurs in the duodenum is called a duodenal ulcer. People can have both gastric and duodenal ulcers at the same time. They also can develop peptic ulcers more than once in their lifetime. Peptic ulcers are common. Each year in the United States, about half a million people develop a peptic ulcer. A bacterium called Helicobacter pylori (H. pylori) is a major cause of peptic ulcers. 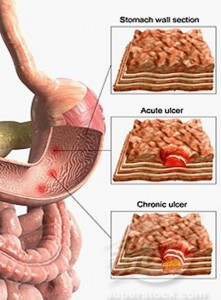 Nonsteroidal anti-inflammatory drugs (NSAIDs), such as aspirin and ibuprofen, are another common cause. Rarely, cancer­ous or noncancerous tumors in the stomach, duodenum, or pancreas cause ulcers. Peptic ulcers are not caused by stress or eating spicy food, but both can make ulcer symptoms worse. Smoking and drinking alcohol also can worsen ulcers and prevent healing 4, 5, 6.

Plant material            : The plant material was collected from Bareily, Uttar Pradesh, India, during the month of Sept. 2010 and air-dried. The plant for the proposed study was identified and authenticated by taxonomist Dr. Gaurav Nigam, Associate Prof., Department of Botany, Bundelkhand University, Jhansi (U.P)., India, Voucher specimen (No. 922) has been deposited in the herbarium of the same department.

Animals: Healthy Wistar Albino rats, weighing about (180-250gm) of either sex were obtained from animal house, Institute of Pharmacy, Bundelkhand University, Jhansi. The animals were housed under the uniform laboratory condition & fed with commercial diet & provide with water ad libitum, during the experiment. The animal were procured from Gwalior & permitted for study under the Institutional Animal Ethical Committee. The reference number of Institutional animal ethical committee is BU/PHARM/IAEC/04.

Essential Oil: Fresh samples of the plant leaves of Calamintha officinalis Moench. (Lamiaceae) were distilled in Clavenger apparatus over 6 hrs. The essential oil obtain was dried with anhydrous sodium sulphate and stored in vacuum tight container at 4oC. The essential oil collected was light yellow in color, having a strong pleasant odor. Its extractive value was found to be 9.44%v/w 7.

Acute Oral Toxicity Studies: Acute oral toxicity was performed by using OECD guidelines-423 (Organization of Economic Co-Operation Development) - Fixed Dose Procedure. The purpose of this study is to allow selection of the appropriate starting dose for the main study. Acute oral toxicity studies of Calamintha officinalis Moench. was performed in Swiss Albino mice. The mice were kept for 4 hr of fasting prior to the experiment and body weight of the mice should be noted. Usually mice weighting 25-35 gm were used for acute toxicity studies. The dose was given to every mice orally according to body weight. The test for acute toxicity was performed at 0.25, 0.50, 0.75, and 1.0 ml/kg oral dose of Ethanolic extract of aerial part of Calamintha officinalis Moench.

Food was given for a 1-2 hours after the administration of drug. During the first 4 hr. after the drug administration, animals were continuously observed for gross behavioral changes & then observation is continued for 24 hr & 72 hr in regular intervals for 14 days. The parameter such as hyperactivity, grooming, convulsions, sedation, hypothermia, change in fur colour, mortality or moribund stage or death was observed (table 1).

RESULT: LD50 of  extracted oil of aerial part of Calamintha officinalis Moench. was done as per OECD guidelines (Revised draft 423). The animal did not show any signs of toxicity and behavioral changes upto 1.0 ml/kg dose after 24 hrs and 72 hrs.

Diclofenac Sodium Induced Ulcer Model : All the animals were grouped into five groups. Each group had 3 animals.

The animals of group III, IV were treated with the sample extracted oil at different doses. This treatment was given thrice at the 12 hours interval. Animals of the group V were treated with ranitidine simultaneously. After one hour of last administration of sample extracted oil the NSAID was given by oral gavages to the group II to group V animals.

After 6 hours of NSAID administration, the animals were sacrificed by cervical dislocation. The animals were dissected and the stomach was taken out. Finally the ulcers were observed macroscopically. The observation was made for any bulging or inflammation in the stomach. The stomachs were opened along the greater curvature and the mucosa was exposing for evaluation. The ulcer scores (US) were calculated as the arithmetic mean for each treatment given in table 2. Sacrifying the rat, stomach was removed and opened along the greater curvature and washed it slowly under top water, but it on the glass slide and observed naked eye 8.

Collection of Gastric Juice: The stomach was carefully keeping the esophagus closed opened along the greater curvature and the gastric contents were removed the gastric contents were collected in plain tubes and centrifuged at 3000 rpm for 5 min the volume of the supenatant was expressed as ml/100 gm body weight the mucosa was  fushed with saline and observed for gastric lesions using the macroscopic structure.

RESULT: Diclofenac sodium caused damage on the glandular mucosa (3.23±0.03). In contrast to it, the pretreatment with extracted oil of Calamintha officinalis Moench. at  doses at 0.4 ml/kg and 0.8 ml/kg of the body weight decreased the ulcerated area to 2.48±0.02 and 3.36±0.01, respectively, which was comparable to the effect exerted by Ranitidine 1.50+0.01.

Pylorus ligated Ulcer Technique: Pylorus ligation was done by ligating the pyloric end of the stomach of rats 1 h after test substance administration. Animals were allowed to recover and stabilized in individual cage and were deprived of water during post­operative period.

After 4 h of surgery, rats were sacrificed and gastric juice was collected, centrifuged and the supernatant was measured. Gastric contents were analysed for total acidity by titrating against 0.01 N NaOH using phenolphthalein as indicator. The pH of gastric juice was measured using pH meter. The ulcers were examined on the dissected stomachs as described below in table 3 and ulcer index was measured 9.

RESULTS: The results obtained when ulceration of the gastric mucosa was induced by pylorus ligation were shown in above table. In gastric secretion studies, it was found that pylorus ligation control rats having the gastric pH of 2.13±0.01 was increased when treated with Calamintha officinalis Moench. in a dose-dependent manner. Ranitidine, the standard control showed highest gastric pH (6.79±0.01). The pylorus ligation control animals showed total acidity of 124.73±0.03 mEq/L/100g, whereas Calamintha officinalis Moench. decreased the total acidity in a dose dependent manner.