ABSTRACT: Medicinal plants are essential in our balanced life diet and are in demand in allopathic and herbal medicine. The present study was aimed to evaluate the phytochemical, antioxidant and antimicrobial activities of Phyllanthus emblica (Euphorbiaceae), Averrhoa bilimbi (Oxalidaceae) and Phyllanthus acidus (Euphorbiaceae) fruits. The preliminary phytochemical analysis was carried out using standard methods. Total phenolic, flavonoid, protein, vitamin-C and tannin content were analyzed. Antioxidant and antibacterial activity was assessed by DPPH and agar well diffusion method. Phytochemical screening revealed the presence of alkaloids, flavonoids, glycoside, phenols, proteins, and amino acids, steroids, saponins, terpenoids, tannins, resins and emodols in different fruit extracts. The phenolics, protein and vitamin C content were higher in Phyllanthus emblica fruits. While flavonoids and tannin content was higher in Averrhoa bilimbi fruits. The free radical scavenging activity was significantly higher in Phyllanthus emblica fruits. Maximum inhibition of antibacterial activity was noticed in Phyllanthus emblica against Bacillus subtilis followed by Klebsiella pneumoniae, Staphylococcus aureus, and Escherichia coli respectively. In conclusion, our studies provide evidence that fruit extracts of these medicinal plants can be recommended as potential sources of nutraceuticals and for pharmaceutical industries.

INTRODUCTION: Medicinal plants constitute a source of raw material for approximately 25% of the prescribed drugs, which plays an important role in the field of health care. Medicinal plants in developing countries are used as a formational basis for the maintenance of good health, whereas in the developed countries they are used for the extracts and development of several drugs and chemotherapeutics 1.

Medicinal plants are rich sources of bioactive compounds such as alkaloids, flavonoids and phenolic compounds 2.

Phyllanthus emblica Linn. is one of the most habitually used herbs and it is widely available in most tropical and subtropical countries of China, India, and Malaysia. The plant is commonly called ‘Indian Gooseberry’, Amla in Hindi and Nellikai in Kannada and it belongs to the family Euphorbiaceae. Indian gooseberry has been reported to contain several, compounds including alkaloids, diterpene, carbohydrates, furan lactones, etc. and it has many pharmacological properties e.g. analgesic, anti-inflammatory, hepatoprotective, immunomodulatory, anti-atherogenic, chemo- protective properties 3, 4.

Phyllanthus acidus is one of the trees with edible small yellow berries fruit in the Phyllanthaceae/ Euphorbiaceae family, found in tropical or subtropical regions of Asia, Caribbean region, Central and South America. The fruits are used to make juice, cooked as relish, syrup and also jam, other than eaten fresh and it is also often eaten as pickle. P. acidus contains many chemical compounds such as b-amyrin, lupeol, phyllanthol and it has pharmacological activities like analgesic, antilipoxigenase 7.

Based on the above facts, the present study was designed to evaluate the phytochemical analysis, antioxidant and antibacterial activities of three medicinally important fruits.

MATERIALS AND METHODS: The matured fruits of Phyllanthus emblica (P. emblica), Averrhoa bilimbi (A. bilimbi) and Phyllanthus acidus (P. acidus) were collected from herbal, Bengaluru. Authenticated was done by the Department of Botany, Bangalore University. The voucher specimens (BUB, No. 2301, 2302 and 2303) were deposited in the Department. The fruits are washed thoroughly with tap water and were soaked in bavistin for five minutes then rinsed with distilled water (d.w). The fruits were sliced, shade dried and biomass was recorded.

Preparation of Extracts: The 20 gm of each powdered material was weighed and extracted in methanol using the Soxhlet apparatus. The extraction was carried out continuously for 12-14 h. Then extracts were concentrated for evaporation and stored at low temperature in sterile capped containers till further analysis.

Total Phenolic Content: The total phenolic content in methanolic extracts of fruits was determined by using Folin Ciocalteu (FC) method 9. Every 0.5 ml of fruit extract (1 mg/ml) was mixed with 0.5 ml of FC reagent and allowed to stand for room temperature (RT) for 2-3 min. Followed by 1ml of 7% sodium carbonate was added and the final volume was made up to 5ml with d.w. After 90 min of incubation at RT in dark, the absorbance was read at 725 nm using UV visible spectrophotometer in triplicates. Gallic acid was used for calibration of the standard curve. The results were expressed as mg of gallic acid equivalent (mg GAE/g) of dry weight (DW) of material.

Total Flavonoid Content: Total flavonoid content was determined by aluminum chloride (AlCl3) method 10. Briefly, 0.5 ml of extracts were taken and the volume was made up to 2 ml with 95% methanol. Then 0.1 ml of 10% AlCl3, 0.1 ml of 1M potassium acetate and 1.8 ml d.w were added consecutively. The test solutions were shaken vigorously and incubated for 30 min in RT. Absorbance was measured at 415 nm with UV- spectrophotometer against blank. The total flavonoid content was expressed as mg of quercetin equivalents per gram sample (mg QE/g).

Total Condensed Tannin (Proanthocyanidin): Total tannins were determined according to the procedure of Liu et al. 11 Briefly, to 500 µl of the sample, 3 ml of 4% vanillin solution in methanol and 1.0 ml of concentrated hydrochloric acid were added. The mixture was then shaken and incubated at RT for 15 min. the absorbance was measured at 500 nm against blank. The tannin content was expressed as mg of catechin equivalent per g of dry weight (mg CE/g DW).

Protein Assay:  Protein content was measured by the method of Layne 12. Briefly, 1.0 ml of sample was added to 1.0 ml of biuret reagent (10% NaOH, Sodium potassium tartrate and Copper (II) sulphate pentahydrate). The mixture was incubated for 20 min at RT, the absorbance was read at 540 nm against blank. Bovine serum albumin (BSA) was used as a standard.

Ascorbic Acid (Vitamin-C) Content: Ascorbic content was measured according to the method of Ibrahim et al. 13 The fresh fruits were extracted in phosphate-citrate buffer solution (1%), using chilled pestle and mortar. The homogenate was filtered and added to 1 ml of DCPIP (2, 6-dichloroindophenol). The absorbance was read at 520 nm within 10 min. L-ascorbic acid was used as a standard. Vitamin-C content was recorded as mg of L-ascorbic acid in fresh fruits.

DPPH Radical Scavenging Assay: The free radical scavenging activity was measured by DPPH assay 14. Briefly, different concentration of methanolic extract of the sample (10-100 µg/ml) was added to 3 ml of 0.25 mM (95% methanol) of DPPH solution. After 30 min of incubation at RT in dark, the absorbance was measured at 517 nm. BHT (Butylatedhydroxytoluene) was used as a standard. DPPH radical scavenging activity was calculated by the following formula.

The IC50 value is the concentration of the plant extract required to scavenge 50% of the total DPPH radicals available.

Antibacterial Activity: The solvent extracts were assayed against the following organisms Bacillus subtilis, Escherichia coli, Klebsiella pneumoniae, and Staphylococcus aureus. Bacterial strains were obtained from the Department of Microbiology, Bangalore University, Bengaluru. In-vitro antibacterial activity was performed by agar well diffusion method according to the protocol of Varghese et al. 15 Wells were bored into Nutrient agar using a sterile 8 mm diameter cork borer. Different solvent extracts (50-200 µl) were added into the wells using sterilized pipettes and allowed to diffuse at room temperature for 2 h. The plates were incubated at 37 ºC for 24 h. After the incubation, diameter of the zone of inhibition was recorded in millimeter and compared with standard antibiotic (streptomycin). The experiments were repeated thrice in triplicates.

Biomass: Fig. 1 represents the fresh and dry weight of P. emblica, A. bilimbi, and P. acidus fruits. The higher biomass was recorded in P. emblica fruits followed by P. acidus and A. bilimbi. 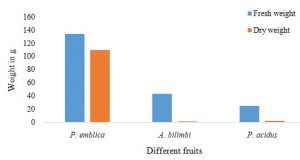 Total Phenolic Content: The total phenolic content is estimated using the FC reagent and calculated from regression equation of calibration curve (y=0.0578x - 0.3478, R2= 0.9907). In the present study, total phenolic content was found to be higher in methanolic extract of P. emblica (42.99 ± 4.35 mg/g GAE), P. acidus (40.91 ± 2.67 mg/g GAE) and A. bilimbi (33.24 ± 3.19 mg/g GAE) respectively Table 2. Kumaran and Karunakaran 18 and Hasanuzzaman et al., 14 reported higher phenolic content in P. emblica and A. bilimbi methanolic fruit extracts. The results were concordance with the reports of Devahastin and Mayachiew 19 and Padmapriya and Poonguzhali 10.

Ascorbic Acid (Vitamin C) Content: The vitamin C is popularly known as ascorbic acid, it is an L-enantiomer of ascorbic acid, which is water-soluble involved in various biological reactions. Statistical analysis revealed that vitamin C content of P. emblica (104 ± 2.19 mg/g DW) was significantly higher than A. bilimbi (91.05 ± 8.87 mg/g DW) and P. acidus (76.35 ± 8.33 mg/g DW). The results were in concordance with the Ariharan et al., 22, where they observed higher vitamin C content in A. bilimbi fruits. 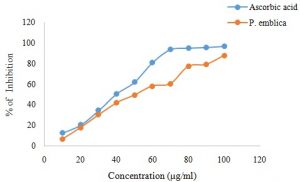 The standard antioxidant Ascorbic acid showed potent radical activity with an IC50 value of 11.42 µg/ml. A significant relationship between the antioxidants and total phenolic compounds are the major contributor of antioxidant capacities 23.

Antibacterial Activity: The extracts of P. emblica, A. bilimbi, and P. acidus were showed varying degrees of antibacterial activities. The results were evaluated by measuring the diameter zone of inhibition in mm.

The maximum inhibition was observed in P. emblica against B. subtilis (20.66 ± 2.51 mm) followed by P. acidus and A. bilimbi respectively. The methanolic extract of P. emblica exhibited significant antimicrobial activity than chloroform and diethyl extracts against S. aureus and K. pneumoniae respectively 24.

FIG. 3: ZONE OF INHIBITION OF P. EMBLICA, A. BILIMBI AND P. ACIDUS FRUIT EXTRACTS. Values represent the Mean ± SE in triplicates. Means with the different letters in columns indicate significant differences at 5% level.

CONCLUSION: All the fruits are a good source of secondary metabolites, and also rich in protein and vitamin C content which is essentially required in our regular diet. The methanolic extract reveals the presence of higher secondary metabolites such as flavonoids, phenolic, tannins, proteins, saponins, reducing sugar, steroids as compared to aqueous and chloroform extracts. The P. emblica extract exhibits higher antibacterial and antioxidant activity. Further studies are needed to isolate the active biochemical constituents.

CONFLICT OF INTEREST: Authors declared that they have no conflict of interests.