ABSTRACT: In an effort to increase yields from a limited area, farmers tend to indiscriminately use more chemical fertilizers and pesticides. The brewery sludge can be directly applied to the soil for the agricultural purposes or it can be composted before utilizing for plant growth. The main objective of the present study is to test the efficacy of the bio-fertilizer in the growth and yield of Chilly Plant.  A potted experiment was conducted to evaluate the potential of brewery sludge on different soil chemical properties and growth in chilly plant.  The sun dried Brewery sludge was mixed with three different types of soils viz., clay loamy, river sand and red sandy loamy soil in different ratios. Chilly seeds pre incubated in water were sown in earthen pots. There was a significant increase in nitrogen and Potassium concentration in all the three amended soil samples (90%) where as decrease in Phosphate concentration in the amended soils. There was a realistic increase in plant growth in river sand as compared to red sandy loamy soils and clay loamy soils respectively. Heavy metal concentration was recorded below detectable levels which ensure brewery sludge for agricultural application.

INTRODUCTION: The current global scenario firmly ascertains the need to adopt eco-friendly agricultural practices for sustainable agriculture.  In an effort to increase yields from a limited area, farmers tend to indiscriminately use more chemical fertilizers and pesticides.  Such activity makes the soil poor of micronutrients and microorganisms.  Due to this the soil loses its original structure and texture.

In this scenario there is a need to detoxify the land rejuvenating the soil health.  This leads to a high demand for organic fertilizers all over the world. Brewery waste water sludge is the sludge generated in brewing industry with high organic loading in terms of COD and BOD. The malting and brewing industries use large volumes of water and 70% of the intake is discharged as effluent1.  Chemical analysis on brewery sludge revealed that it has high N, P, K, volatile fatty acids and nutrients which are important requirement for plant growth2.  It also consists of various important organisms like heterotrophic fungi and actinomycetes3. The fertility of the soil can be improved because of the presence of these minerals and organisms4. The brewery sludge can be directly applied to the soil for the agricultural purposes5 or it can be composted before utilizing for plant growth6.

Accordingly, the pre aerobic treatment has been replaced with the Up flow Anaerobic Sludge Blanket Reactor (UASBR) in the year 2010 with the advantage of not only achieving effluent quality as per central Pollution Control Board (CPCB) norms but 50% reduction in energy demands7. The effluents  discharged  are found to have high  organic  and  acidic  content, which increases  the  BOD, COD  and high  organic  load in the waste water contributive to dissolved carbohydrates, alcohols, suspended solids, yeast  etc,  which  pollutes    the    water    bodies considerably8.

United Millennium Breweries Ltd located in village Ranasthalam, Srikakulam, A.P was selected for the present study.  The industry is manufacturing beer using barley, broken rice and yeast as raw material. The discharge of sludge is in amount of 3l per 1l beer. The present study was taken up to find an alternative method for disposal of brewery sludge.

The brewery waste sludge was mixed with clay loamy, river sand and red sandy loamy soil in various ratios.  These mixtures were transferred to earthen pots of 500 g capacity.  Three seeds of chilly (Capsicum annum L) were sown into each pot.  Five replicates were kept for each ratio.  The pots were maintained in green house and were watered every day.  The pots were maintained for 75 days until the yield was obtained.  Different biochemical parameters like plant height, root length, shoot length, plant dry weight and fruit weight were determined for all the combinations.

When the yield was harvested.  The plant was carefully removed from the pot along with the soil and kept in tap water; it is washed thoroughly until the soil has been completely removed. Then the plant was completely stretched and the biochemical parameters like plant height, root length, shoot length, dry weight, fruit weight was measured.

Analysis of selected heavy metals in Brewery sludge suggested that Lead (Pb), Nickel (Ni), Mercury (Hg), Cadmium (Cd) were present well below the detection levels and the sludge can be safely used for agricultural purposes.

Contrary to Nitrogen and Potassium increased application of sludge decreased the availability of Phosphorous. These results are in agreement with the conclusions reported by Ahmadi et.al., 11 who reported that application of high N rates decreased the Phosphorous in spinach plants. Phosphorus uptake is in the form of H2Po4 and HPO42 anions. Nitrate increment might have a competitive effect with Phosphate anions and thus cause the inhibition of both anions absorption.

The percentage of Organic Carbon of the sludge was 2.90 as compared to 0.85, 0.73 and 0.3 for clay loamy, river sand and red sandy soil respectively. Brewery sludge addition improved the organic carbon content of the three soils significantly and the higher water retention capacity is linked to high Organic Matter, high cation exchange capacity and other nutrients. Erdem and Sozudo 12 have found that brewery sludge amendments improved pH of acidic soils and enhanced the Organic Carbon, exchangeable cations, soluble cations and anions, NH4+, N and N03-. The N content of the amended soil increased as brewery sludge rates increased. Germination studies of chillies revealed increased growth of the plants when compared to that of controls.

However enhanced growth was observed with increasing proportions of brewery sludge up to 40%, 50%, and 60% by volume in clay loamy, river sand and red sandy loamy soils respectively. Further increase in the content of sludge in soils severely retarded seed germination and plant growth vice-versa. There was an  increase of 16.21%,15.15%, 14.44%  for 40% by volume sludge amended with clay loamy soil, 76.14%, 61.349%, 85.71% for 60% by volume amended with river sand, 13.02%, 35.88%, 71.42% for 50% by volume sludge amended with red sandy loamy soil for  plant growth, dry weight and fruit weight respectively. Water retention capacity ranged from 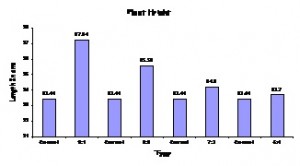 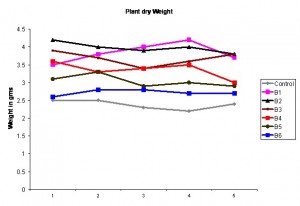 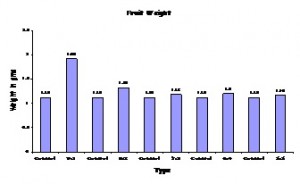 FIG: 3: ILLUSTRATION OF FRUIT WEIGHT IN COMPARISON TO CONTROL IN RIVER SAND AMENDED WITH BREWERY SLUDGE

Use of brewery sludge in river sand and red sandy loamy soil has shown significant increase in yields. This suggests that brewery sludge would be a positive input for yield increase in relation to poor and semi arid soils. Cost effectively it is cheaper and easy to apply. Investigations by craft and nelson revealed that compost made with brewery sludge was suppressive against seedling and root diseases caused by the fungus pythium graminicola.

According to Mohimi et.al. 13 land application and use of sludge as a soil conditioner appear to be the most acceptable way to dispose industrial sludge. Brewery sludge, as organic manure, should be regarded as valuable commodity especially in warm arid and semi arid regions particularly where soil fertility depletion and soil degradation are most serious problems. Since the sludge is a rich source of organic manure which is an important property for moisture retention, it can be used to reclaim desert soils.

CONCLUSIONS: A cost effective user friendly technique was developed to convert Brewery sludge into a bio-fertilizer.Bio fertilizer can reduce the need of inorganic fertilizers like NPK and indirectly reduce our dependence on fossil fuels. Brewery sludge which is considered as a waste product can be substituted for fertilizers and nutrients and thereby avoid costly inputs. It would be a boon to small and medium farmers who tend to borrow heavily for costly fertilizers. This would be therefore ameliorate their condition and avoid the dangers of debt trap for farmers of this region.