INTRODUCTION: Medicinal plants play an important role in medicine or veterinary practice for therapeutic and prophylactic purposes 1. According to the traditional system of Ayurvedic treatment, medicines made up of plant products, either singly or in combination with others are considered to be less toxic and free from side effects as compared to the synthetic drugs 2, 3. According to the World Health Organization (WHO) in 2008, more than 80% of the world’s population relied on traditional medicine for their primary healthcare needs.

Many plants posses pharmacological properties because they consist of various secondary metabolites like glycosides, saponins, flavonoids, steroids, tannins, alkaloids, triterpenes which should be utilized to combat the disease causing pathogens 4-6.

Plants have been exploited for treatment of human diseases by different ethnic groups in different parts of the world since the dawn of civilization. But the traditional cultures without proper scientific evidence are not able to ponder the importance of plant species for treatment of human diseases. Therefore, to ascertain the medicinal value of the phytochemicals, pharmacological studies have been carried out by different workers world over 7. The phytochemicals from medicinal plants also serve as lead compounds in drug discovery and design 8.

Melia azedarach L. (Meliaceae) is a moderate sized deciduous tree (5-15 m in height) 9. It is native to tropical Asia but widespread and naturalized in most of the tropics and subtropical countries 10, 11. In India it is widely distributed in Himalayas region between the altitudes of 700 - 1000m 9. Melia azedarach has many medicinal values which have been used for various medicinal purposes 12, 13. Kernel extracts of this plant have already been studied and shows important anti-fungal activity 14-16. Bark extract used for curing many diseases of skin conditions, such as eczema, ulcerative wounds, syphilitic ulcer, leprosy, scrofula etc. in the form of lotion, ointment or poultice. Systematically it is used as an emetic, cathartic, anthelminthic, antipyretic, expectorant, and diuretic 17-24. Melia azedarach is being used in skin diseases, against intestinal disorders, stomach ache, intestinal worms, uterine illnesses, cystitis, as diuretic and febrifuge 25, 26. This plant has also antimalarial, anthelminthic and cytotoxic activities 27. Methanol, ethyl acetate and aqueous extracts of this plant showed significant inhibition against tested bacteria 28.

According to various scientific studies this plant is reported to have anticancer 29, antimalarial, analgesic and anti-inflammatory activity 30. In the earlier studies, ethanolic leaf extract of Melia azedarach showed activity against fever, nausea, thirst and skin diseases 31-33. Methanol, ethyl acetate and aqueous crude leaf extracts of this plant showed significant inhibition against some gram positive and gram negative bacteria 28. Its n-hexane and methanolic bark extract showed good antibacterial and antioxidant potential 33.

In the present investigation, n-hexane and methanolic extracts of Melia azedarach L. bark have been evaluated for their antifungal activity.

The plant Melia azedarach was collected from the Chandaka reserve forest area near Bhubaneswar, Odisha in the month of April 2014. Identification of the voucher specimen was done by following the Flora of Orissa 34. The voucher specimens were deposited in the herbarium of Post Graduate Department of Botany, Utkal University, Vani Vihar, Bhubaneswar. The bark were collected in bulk amount, washed in running tap water, dried under shade and made to coarse powder form.

The collected bark which was shade dried and ground to form a coarse powder and had been successively extracted with the solvent n-hexane and methanol by soxhlet apparatus 35 and the extract was recovered under reduced pressure in a rotatory evaporator. The extracts were kept in desiccators for further use.

Fluconazole and Clotrimazole were used as Reference Antifungal (RA). The stock solutions of RA were prepared in 10 % dimethylsulphoxide (DMSO) to give a concentration of 1.56 mg / ml for RA respectively.

The fungal strains were sub-cultured in Sabouraud’s Dextrose Agar (HiMedia, Mumbai) medium. The fungal susceptibility test was determined by measurement of zone of inhibition (ZI) by agar well diffusion assay as described below against some yeast like fungal strains. However, the antifungal activity of the extracts against some mycelial fungi was determined by poison food method and expressed in terms of zone of restricted growth 36.

Agar well diffusion method 35 was followed to determine the zone of inhibition of microbes in Sabouraud’s Dextrose Agar (SDA, HiMedia Laboratories Ltd., Mumbai). Plates were swabbed (sterile cotton swabs) with 8 hr old broth culture of fungi. Wells (8 mm diameter and about 2 cm apart) were made in each of these plates using sterile cork borer. Stock solution of plant extracts were prepared at a concentration of 3 mg/ml and about 50 µl of the  solvent extracts were added aseptically into the wells and allowed to diffuse at room temperature for 2 hrs. Control treatments comprising inoculums without plant extract were set up. The plates were incubated at 28 °C for 48 hrs for fungal pathogens. Triplicates were maintained and the diameter of the zone of inhibition (mm) was measured and statistical analysis was carried out.

Poison food method 36 was followed to determine the zone of restriction of fungus. It is used for that fungus having high mycellial spreading. For those strains of fungus, the agar plates are prepared by mixing the Sabauraud’s Dextrose Agar (SDA, HiMedia Laboratories Ltd., Mumbai) with the plant extract at the concentration of 3 mg/ml. Then a disc of the fungal mycelium was taken out using the sterile cork borer and placed by inverting the disc so that the portion of the fungal disc touches the SDA medium and kept in the centre of the plate. These plates were kept in the room temperature (28 °C) for 2-3 days for measuring the zone of restriction.

Results expressed as mean ± S.D. of three determinations,   (-) denotes no zone of inhibition 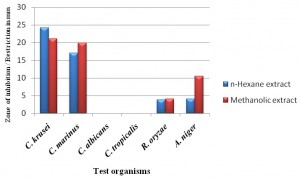 FIG. 1: IN - VITRO ANTIFUNGAL ACTIVITY (ZONE OF INHIBITION OR RESTRICTION IN MM) OF VARIOUS PLANT EXTRACTS OF MELIA AZEDARACH L.

CONCLUSION: It was found that Melia azedarach L. has toxic effect against fungal strains. The n-hexane extracts of this plant has higher antifungal activity against yeast like and mycelial fungi than methanolic extract. The fungitoxic potential of the extract of Melia azedarach against pathogenic fungi under study indicated that further studies are required for the identification of the bioactive molecules for drug development.

ACKNOWLEDGEMENT: The authors are thankful to the Head, Post Graduate Department of Botany, Utkal University, Bhubaneswar, Odisha for providing necessary laboratory facilities to conduct the study. The financial assistance received from the University Grants Commission, Govt. of India, New Delhi in the form of Maulana Azad Fellowship to the first author is deeply acknowledged.