ABSTRACT: Bilayer tablet is a new era for the successful development of controlled release formulation along with various features to provide a way of the successful drug delivery system. Bilayer tablets can be a primary option to avoid chemical incompatibilities between API by physical separation and to enable the development of different drug release profiles. The bi-layered tablet is a very different aspect of anti-inflammatory and analgesic. The purpose of this study was to develop and evaluate bilayered tablets of curcumin for the effective treatment of inflammation. The Immediate-release layer was prepared by using superdisintegrants- SSG and binder used xantham gum and the sustained release layer was prepared by using hydrophilic polymer like HPMC K 100 and PVP. Before the preparation of the tablets, all the pre-formulation parameters were checked and the tablet of curcumin were prepared by direct compression method and was evaluated for physical characteristics like hardness, weight variation, drug content and friability. In-vitro release of drug was performed USP type I dissolution test apparatus using 0.1N HCl and phosphate buffer pH 7.4 as dissolution media and dissolution was continued for 12 h for the sustained release layer. It was found that all the formulations were within limit of the standard. The drug release of the tablet was in the range of 82.44% - 88.20% in 12 h. The rate of drug release follows the Higuchi model and First-order kinetics. It was concluded that the F4 formulation showed the optimum result as a bilayered tablet for the effective treatment of inflammation.

INTRODUCTION: Bilayer tablet is suitable for sequential release of two drugs in combination it is also capable of separating the two types of incompatible substances and also for sustained release tablet in which one layer is immediate release as initial dose and the second player is maintenance dose 1.

Bilayer tablet is a great example of avoiding chemical incompatibilities between the APIs and providing different drug release profiles (Immediate release with extended-release). In a bilayer tablet, amongst the two layers, the first layer acts for loading dose purpose and second will for maintenance purpose 2.

Curcumin is a bright yellow chemical produced by Curcuma longa plants. It is the principal curcuminoid of turmeric (Curcuma longa), a member of the ginger family, Zingiberaceae. It is solid as an herbal supplement, cosmetics ingredient, food flavoring, and food coloring. Curcumin mediates potent anti-inflammatory and anti-carcinogenic actions via modulating various signaling molecules. It suppresses a number of key elements in cellular signal transduction pathways pertinent to growth, differentiation, and malignant transformation; it was demonstrated in-vitro that curcumin inhibits protein kinase, prostaglandin biosynthesis, and expression of the enzyme (COX)-2. Excretion is mainly by fecal excretion and also through biliary excretion in a small amount. Medicinal uses include they used as an anti-inflammatory, anti-oxidant, lower risk of brain diseases, preventing and treating Alzheimer’s disease, rheumatoid arthritis, depression.

From literature, it is found that curcumin has anti-inflammatory properties and hence used in rheumatism but it has poor bioavailability due to its low aqueous solubility. To enhance its bioavailability, the present study is aimed to develop bilayered tablets of curcumin in which one layer serves immediate release as an initial dose and second layer as a maintenance dose for effective treatment of Inflammation.

In the present work, an attempt was made to prepare the bilayered tablet of curcumin by direct compression so as to increase its bioavailability and thereby reducing the dosing frequency.

Materials: Curcumin, dicalcium phosphate, hydroxypropyl methylcellulose, microcrystalline cellulose and xanthan gum were procured from Yarrow Chem Products Mumbai. All the other chemicals and reagents used in this study were of analytical grade.

Drug-Excipient Interaction Study: A proper design and formulation of a dosage form require consideration of the physical, chemical and biological characteristics of both drug and excipients used in the fabrication of the product. Compatibility must be established between the active ingredient and other excipients to produce a stable, efficacious, attractive and safe product. So before producing the actual formulation, the compatibility of curcumin with excipients was tested using the Fourier Transform Infrared Spectroscopy (FT-IR) 3.

Preparation: The immediate-release layer was prepared by using super disintegrants-sodium starch glycolate and xantham gum as a binder and the sustained release layer was prepared by using hydrophilic polymer like HPMC K 100 and PVP. The various ratios of the ingredients used are shown in the formulation table, before the preparation of the tablets all the pre-formulation parameters were checked and the drug and excipients were mixed to get a premix for direct compression into tablets 4.

Pre-compression Studies: The powder blends were evaluated suitably for their characteristic parameters such as the angle of repose, Hausner’s ratio, bulk density, tapped density and Carr’s index.

Post-compression Studies: As per pharmacopoeial procedures all batches of curcumin tablets were characterized for appearance, thickness, hardness, weight variation, friability.

Drug Content: 20 tablets of each type of formulation were weighed and crushed in mortar and powder equivalent to 320 mg of powder was weighed and dissolved in 100 ml of pH 7.4 phosphate buffer.  From the stock solution, a 1ml sample was withdrawn and diluted to 10 ml with pH 7.4 phosphate buffer. The absorbance was measured at wavelength 432 nm using double beam UV-Visible spectrophotometer 5.

Stability Studies: The stability studies were carried out of the most satisfactory formulation as per ICH guidelines. The formulated bilayer tablets were kept at 25°C ± 2 °C and at 40ºC ± 2 °C / 75 ± 5 % RH, for period of six months, and parameters evaluated hardness, friability, content uniformity, in-vitro disintegration time and in-vitro drug release 8.

Drug and Excipient Interaction Study: The FTIR studies were carried out as mentioned in the method. Major functional groups present in curcumin show characteristic peaks in IR spectrum. 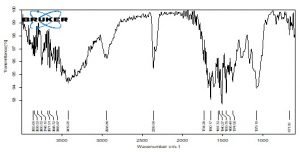 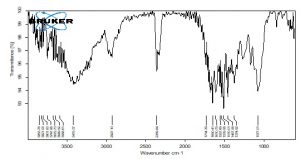 From these obtained results prepared blends were found to possess good flow properties and ready for compression into tablets.

General Appearance: The formulated curcumin bilayered tablets were round in shape with immediate-release layer orange in color and sustained release layer yellow in color as seen in the figure and with a distinctive odor.

The tablets were subjected to evaluation tests according to IP standards. The hardness of tablets from each batch of the formulation was found to be in the range of 5.4 to 6.5 kg/cm2. The thickness of all bilayered tablets was tested. It was observed that the thickness of all tablets ranged between 2.3-2.6 mm. The weight variation test was performed. The weight variations of the sample were found to be within the range of 350 ± 0.577 to 360 ± 1.527 mg. The friability was less than 1% for all the batches of tablets. The evaluation values are shown in Table 5.

Immediate Release Layer: The release of curcumin from the immediate-release layer was analyzed by plotting the cumulative percentage of drug release vs. time. 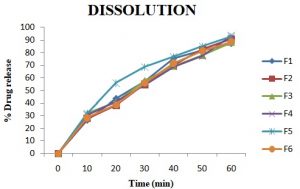 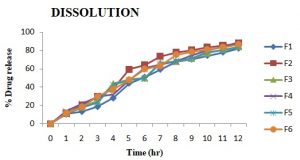 From the analysis of kinetic data, formulation F4 was found to follow the First order release with the Higuchi model release.

Stability Studies: F4 was selected as the best formulation and was chosen for stability studies. Stability study was conducted at 25°C ± 2°C/ 60% RH ± 5% RH and 40 ºC ± 2 °C / 75 ± 5 %  RH for 6 months and parameters evaluated for hardness, friability, content uniformity, in-vitro disintegration time and in-vitro drug release for the best formulation F4. From the evaluations, it was found that there were no significant changes in hardness, friability, disintegration time, in-vitro drug release study.

Optimized formulation design of curcumin bilayered tablets was successfully developed and manufactured and all parameters were closely monitored and evaluated. The amount of PVP and HPMC K100 were selected as the main factor for optimization. While studying the IR spectrum there was no significant change in the peak of the curcumin, therefore it was concluded that there was no interaction between drug and other excipients. The post-compression studies were within the prescribed limits of pharmacopeial specifications. The tablets showed an immediate release to provide the loading dose of drug followed by sustained release up to 12 h. The in-vitro drug release from the tablets show significantly improved drug dissolution. Among the 6 formulations prepared, the formulation F4 has shown 88.98% release and it can be considered as the best formulation.

Kinetic release studies of the best formulation were better explained by the First order and Higuchi model and it indicated that the release of drugs from the formulation is through diffusion mechanism. Stability studies indicate that formulation remained stable and no significant change was observed before and after stability studies. Hence, this optimized bilayer tablet dosage form could be a potential formulation for the delivery of drugs from a single dosage form which could reduce the dosing frequency, improve patient compliance and give better disease management. There is no hindrance for large scale production of bilayer tablets from industrial standpoint.

ACKNOWLEDGEMENT: The authors are thankful to authorities of Crescent College of Pharmaceutical Sciences, Payangadi, for providing all the necessary facilities.

CONFLICTS OF INTEREST: None of the authors has any conflicts of interest in the context of this work.