ABSTRACT: Backdrop: The design, development, formulation and in vitro evaluation of colon targeted drug delivery system with natural polysaccharides was studied with Guargum, Cyclodextrin, Amylose and Pectin. Hence it motivated us to find the combined effect of the natural polysaccharides with Celecoxib matrix tablet for specific targeting to colon. Process: Celecoxib matrix tablet was prepared by drug with equal ratio of Guargum+Cyclodextrin(A+B), Amylose+Pectin (C+D) were taken in the following equal ratio 1:0.2, 1:0.3 & 1:0.4 ratio of both gums,  2% of starch paste was added as binder. The micro crystalline cellulose was added to make the tablet total weight of 200mg.The formulations were coded as (A+B) EF1, (A+B) EF2, (A+B) EF3, (C+D) FF1, (C+D) FF2 and (C+D) FF3respectively. The preformulation studies such as Bulk density (g/cm3), Tapped density (g/cm3), Compressibility index (%), Angle of repose, Average particle size (µm) were determined. Outcome: The formulated Celecoxib Matrix tablet was evaluated for its hardness, friability, weight variation, thickness and diameter. The discharge summary of the matrix tablet was carried out in Simulated Gastric Fluid (SGF), Simulated Intestinal Fluid (SIF), Simulated Colonic Fluid(SCF). The in vitro release profile of Celecoxib matrix tablet (A+B), (C+D) was found to be (EF2)88.4%, (FF2)95.3% correspondingly. Ending: It was found 1.5%, 6% of drug release was observed at 2 hrs, 4-8 hrs respectively with Simulated Gastric fluid and maximum of 95.3% of drug release was found after 24 hours of dissolution study. The above study suggests combined effect of amylose & pectin gives ceiling release for specific colon targeting especially for colon cancer.

INTRODUCTION: The colon, because of its position at the end of the alimentary canal, is not easy to access, and therefore the design of orally administered colonic delivery systems is complex.

The existing technique of 'targeting' drugs to the colon is achieved by formulating the desired drug molecules in a solid dosage form with natural polysaccharides. 1-4 Factors influencing the transit point of pharmaceutical dosage forms in the various regions of the gastrointestinal tract appear to depend on diet, gastrointestinal motility, and physical activity of the person, fasted or fed state of the person. The transform in pH along the gastrointestinal tract was also used to develop colon specific drug delivery systems by applying coatings that were intact at low pH and dissolved at neutral pH. 5 The pH of the colon is however; often lower than the pH of the small intestine, which in turn may be as high as 8 or 9, resulting in a too near the beginning discharge of a drug. Other reports conclude that pH is useful as a trigger for drug release in the colon. The GI tract is divided into stomach, small intestine and large intestine. The large intestine extending from the ileocecal junction to the anus is divided in to three main parts. These are the colon, the rectum and anal canal. 6-10

A large number of anaerobic and aerobic bacteria are present the entire length of the human GI tract. Over 400 distinct bacterial species have been found, 20-30% of which are of the genus bacteroids. The upper region of the GIT has a very small number of bacteria and predominantly consists of gram positive facultative bacteria. The rate of microbial growth is greatest in the proximal areas because of high concentration of energy source. 11-16 The metabolic activity of microflora can be modified by various factors such as age, GI disease, and intake of drug and fermentation of dietary residues.

Among the different approaches previously discussed, microflora activated systems appear to be more promising, since the abrupt increase of the bacterial population and associated enzymatic activity in the colon represents a non-continuous event, independent of the GI transit time. Microbially activated delivery systems for colon targeting are being developed to exploit the potential of the specific nature of diverse and luxuriant microflora associated with the colon compared to other parts of the GIT. 17-21 This vast microflora in the colon survives by fermenting the various types of substrates that have been left undigested in the small intestine. The microflora of the human gastrointestinal tract consists of a coexisting mixture of aerobic, facultative anaerobic and strict anaerobic bacteria in a complex ecosystem.

It shows the presence of microorganisms along the GIT of different animals. These bacteria produce a wide range of enzymes, such as β-glucuronidase, β-xylosidase, α-arabinosidase, β-galactosidase, nitroreductase, azoreductase, deaminase, urea hydroxylase. On account of these variations, it should not be a serious problem with interindividual enzyme activities in humans. On the other hand, the intraindividual variation arising from periodic consumption of certain foods and drugs has to be considered seriously if the microflora should be utilized. Diseases, or treatment with antibiotics, may influence the microbial flora. 22-25 A disease resulting in decreased secretion of hydrochloric acid in the stomach, hypochlorhydria, may result in increased bacterial growth in the stomach. Some microorganisms were found to be suppressed after treatment with antibiotic.26-30

Aspirin and Celecoxib appear to decrease the danger of colorectal cancer in those at high risk. Celecoxib matrix tablet with natural polysaccharide was found to be effective in controlling the colon cancer. However, it is not recommended in those at average risk. There is tentative evidence for calcium supplementation but it is not sufficient to make a recommendation. Vitamin D intake and blood levels are associated with a lower risk of colon cancer. 31-36

The celecoxib matrix tablets were prepared by wet granulation method. Drug with equal ratio of                  Guargum + Cyclodextrin (A+B), Amylose  +  Pectin(C+D)  were taken in the following equal ratio 1:0.2, 1:0.3 & 1:0.4 ratio of both gums,  2% of starch paste was added as binder. The micro crystalline cellulose was added to make the tablet total weight of 200mg. Accurately weighed quantities of pre sieved drug and the gum material were mixed thoroughly, granulated and lubricated with mixture of talc and magnesium stearate.

The granules are now compressed by single tablet punch. The preformulation studies such as bulk density, tapped density, compressibility index and angle of repose were carried out (Table 1). The matrix tablets were also evaluated for hardness, friability, weight variation, thickness and diameter as per the authenticated methods.

Celecoxib matrix tablet release profile was determined using USP 23 dissolution test apparatus II (Paddle type). The dissolution test was performed using 900 ml of 0.1N HCL at 37±0.5 °C with 50rpm. Aliquot (5ml) of the solution was withdrawn at pre determined time intervals (2 h) and replace with fresh dissolution medium. The aliquots were filtered through whatmann filter paper number 41. The absorbance of these solutions was measured on a double beam UV spectrophotometer (UV-1700 Shimadzu) at 252 nm with respect to blank dissolution media. The drug release profile was carried out in Simulated Gastric, Simulated Intestinal fluid and Simulated Colonic fluid to decide the best formulation (Table3). A plot was made by taking the percentage of release Vs time (Fig.1).

RESULTS AND DISCUSSION: The matrix tablets of Celecoxib were prepared by wet granulation method and the tablets were subjected to its physical parameters and in vitro evaluation. The results obtained during the evaluation of the prepared matrix tablets were being tabulated below. Upon observing the results of In vitro drug release profile with SGF, SIF and SCF 30% of Amylose and pectin was found to give better release profile than guargum and cyclodextrin combination. 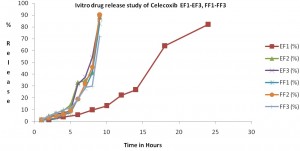 SUMMARY AND CONCLUSION: Matrix tablets of Celecoxib with varying Concentration of Guar gum and Cyclodextrin were formulated.  Invitro dissolution studies shows that the formulation of Celecoxib matrix tablet with guar gum and cyclodextrin as the polysaccharide (EF2) shows good release behavior in colon (88.4%) and restricts release of 38% release in stomach and 19.6% in intestine as compare to other formulations. This study confirms that guar gum and cyclodextrin cannot act as good carrier in the form of matrix tablet for Celecoxib when compared with Amylose and Pectin to deliver it in colon FF2 (95.3). It was found 1.5% of drug release was observed at 2 hrs with Simulated Gastric fluid, 6% of drug release was found at 4-8 hrs with Simulated Intestinal fluid and maximum of 95.3% of drug release was found after 24 hours of dissolution study.