ABSTRACT: The present investigation deals with the histological and histopathological altarations in Channa striatus infected with fungi Aspergillus fumigates and Aspergillus niger. Fresh water murrels were collected from Dharmasagar and Hasanparthy lakes and Local fish markets of Warangal district. This is due to the nature of their habitats as many native species of fish suffer from living beneath turbid water. Among the recent emerging infection diseases responsible for severe population declines in plant and animal taxa, fungal and fungi-like microbes have emerged as significant contributors. Isolated fungi from infected fish bodies were identified as Aspergillus fumigatus and Aspergillus niger. Histopathologically different kinds of destructions were observed in Skin, Muscles, Gills and Liver of the infected fish. Histopathological observations of stained sections of infected fishes revealed pathological lesions of varying severity in studied organs including skin (exhibits compeletely lost epidermis, destiended cells, many of cells lost their cytoplasm and nuclei. Necrotized muscular layer with the formation of granulomas and encysted conidiophores), gills ( hyperplasia and hyperplasia of lamellar epithelium, fusion of lamellae, rod like structures of secondary gill lamellae, cystic- like lesions) and liver ( hypermia and haemorrhage, bile duct hyperplasia, dialated sinuses, interstitial oedema, monocellular necrosis, nuclear degeneration and hypertrophy in hepatocytes). The present study is aimed to assess the histopathological impact of fungal infection of an air breathing freshwater teleost C. striatus.  Penetrating fungal hyphae were observed in skin and complete muscles were observed with formation of mycotic fibrillar granulomas. This is concluded that the mycosis variations in certain histological and histopathologically, exerted destructive effects on skin, gills and liver of Channa striatus.

INTRODUCTION: Channa striatus (Bloch) the air breathing fishes are one of the most important groups of vertebrates which provide free economic services to human beings in multipule ways 1. In the world fish production, India ranks third 2, in particular fish is a rich source of animal protein and its culture is an efficient protein food production system from aquatic environment.

With increasing freshwater fish production movement around the world for farming, releases into the wild for sport fishing and human-driven habitat changes and this is expected, along with improved environmental monitoring of fungal and fungal-like infections that are full extent of the impact of these pathogens on wild fish populations will soon emerge as a major threat to freshwater biodiversity 3. In India the fisher men is facing serious problems with fungal diseases. Fungi is mostly attacked by  due to change in temperature and filthy conditions of water which allow excessive zoospores to grow and the ammonia which is formed by rottening of fish waste wears away the mucus that protects the skin 4. It is fresh water edible fish found suspectiable to fungal infection Aspergillus fumigatus and Aspergillus niger is a pathogenic group of fungi causing EUS infection in fresh water fishes. The pathogenesis of Aspergillus fumigatus and Aspergillus niger have been reported in fresh water fishes by 5. The effect of these infections on seizes in fresh water ecosystems. Some other workers isolated Aspergillus sp from fresh water fishes are 5, 6. Stressed environmental condition and low temperature will increase fungul pathogens in the fresh water and marine water fishes. This kind of pollution has been developed to causes the EUS infection is serious diseases in India and through out of South Asia.

The commercially important fish populations are declining due to over fishing, pollution in water and low aeration in lakes. Infection of L. Rohita and silver carp, Hypophthalmichthys Molitrix with Aspergillus sp and Alternaria sp has also been reported by 7. The present study is an experiment to diagnose the pathogensity of the isolated species of Aspergillus fumigatus and Aspergillus niger, infects on some fresh water murrel fishes.  And in the histological alterations in various tissues such as Skin, Muscle, Gills and Liver due to the fungal infection.

The total numberof 60 mycotic infected fishes showing external symptoms were collected fresh water fish Channa striatus from Dharmasagar and Hasanparthy lakes at Warangal district, Telangana. India. The present study was during the period of October 2013- February 2014. Fishes were brought to the laboratory for further clinical examination. The infected fishes were identified from red spots on their body, excess mucus secretions, damaged and sluggishness. The Microbial investigation was carried out in different infected parts were separated from fish of Channa striatus, namely, Skin, Muscle, Gills and Liver. The Microorganisms such as Aspergillus fumigatus and Aspergillus niger were determined in the various organs.

Preparation Fungal Culture and Isolation of Fungi: Small pecies of organs was taken from the lesion and culture media for the isolation of the fungus. Potato Dextrose Agar (PDA); Corn Meal Agar (CMA) were used as media in to the Petri dishes the tissue pieces were transferred in to other set of Petri dishes. Petri dishes were placed inverted in incubate at 28oc- 30oc for three days, until a circular fungal mat developed, which were used for sub culture of fungus. Identification of fungi was carried out on the basis of keys of 8. These fungal culture results are obtained from NCFT (National Center OF Fungal Taxonomy) New Delhi, followed A. fumigatus (6627.15), A. niger (6629.15).

For the histological study, Skin, Muscle, Gills and Liver tissues control and infected were examined. Tissues were fixed in Aqueos Bouin’s solution for 48– 72 hours. The fixed tissues were then processed routinely and with Azan stain. Prepared in to paraffin blocks then sectioning in to 3- 6μm thickness and stained with Azan and Aniline Blue. Slides were observed under the Microscope to study the variations. Standard histological methods of 9 were followed for histo- pathological investigations.

RESULTS AND DISCUSSION: A total number of 60 fresh water fishes were observed during the investigation for fungal identification and 30 fishes were observed to have infection of conidial fungi showing the symptoms like eroded scales, skin darkening, damaged caudal, pectoral and pelvic fins. In some fishes caudal fin was found completely lost, black patches on abdominal region and ulceration in skin. Total infection was observed mostly on head and tail region of Channa striatus fishes. One of the key risks associated with this new aquaculture environment is the stress caused by intensive production.

Some of fungal pathogens such as Saproglegnia for example are more prevalent and virulent in host (salmonids in particular) that are raised under stressful conditions 10, 11.  In the examination of laboratory isolation of fungi reveals that the presence of Mycelia growth in form of small cottony tufts on the external body surface. The fungal diseases in aquaculture represents the most significant economic losses and in particular fungal infections, which in terms of economic impact are second only to bacterial diseases 12, 13, 14, 15, 16, 17. One of the examples it has been reported in Japan some annual losses of 50% in the production of coho salmon Oncorhynchus kisutch and elvers of eel Anguilla Anguilla due to outbreaks of S. Parasitica 18, 19.  In some fishes hyphae, wound and necrotic lesions were observed on the Skin, Muscle, Gills and Fins. (Fig. 1-3). Cultures grown from innocula takes from different regions of the body showed the presence of two species of Aspergillus fumigatus and Aspergillus niger (Fig. 4- 8). 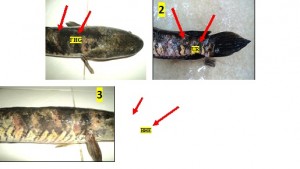 Results of inoculation of pure cultures on infected fish showed both species of fungi are pathogenic to Channa striatus. Fungal infection was studied in C. Catla three types of genera like Aspergillus sp, Blastomycetes sp and Pencillium sp were isolated from head, opericulum, eye, buccal cavity, obdomen, skin and gills of C. Catla Aspergillus sp was the most prevalent fungus infecting all the organs of C. Catla followed by Blastomycetes sp and Pencillium sp. 15, 7. In addition, mycoses spread in freshwater fishes are often seen as a secondary phenomenon. However, due to their virulence, their current emergence in wild fish populations and also the risk of spill back from aquaculture facilities to the wild, routine pathological examination should include (in addition to bacteriological ones) mycological examination 20. Dominant fungal pathogens reported in aquaculture are oomycetes including the genera Achlya, Aphanomyces and Saprolegnia 10, 21, 22.  A. invadans for example can cause epizootic ulcerative syndrome in over a hundred of mostly freshwater fish 23, 24 ,25, but also in some brackish fish species 26, 27. In aquaculture conditions, the most appropriate control is through eradication of the stock, quarantine of new stocks and good husbandry 19, 28, and as such represent a significant cost to the trade 29.

In the present study Results of histopathological examine showed various types of destructions in the selected tissues of Skin, Muscle, Gills and liver. The Skin of Channa striatus exhibits compeletely lost epidermis, destiended cells, many of cells lost their cytoplasm and nuclei. Necrotized muscular layer with the formation of granulomas and encysted conidiophores. Gill lamallae were observed necrotizes with degraded epithelium and fungal hyphae encapsulated by multiple layer of fusiform hepatocytes found in the gill tissue 30.

Conidiophores were observed in between hepatic tissue of Liver, showed vaculolization of liver cells was observed. Similar pattern of histological changes were observed by 9, in Tilapia sp infected with A. flavas. Histopathological manifestations due to Mycotic infection fresh water fishes have been reported by 31, 32, 4. A pathogensity of three species of A. fumigatus, A. niger and A. sydowiion some fresh water fishes. 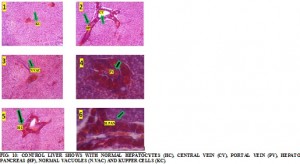 CONCLUSION: During the present investigation it was concluded that the both Aspergillus fumigatus and Aspergillus niger were pathogenic fungi of Channa striatus causes for development of EUS charesterstics on fresh water fishes of Dharmasagar and Hasanparthy Lakes. This was also observed during the study period these species of fungi may develop conidiophores inside the body as well as external surface. And the infection was observed in internal organs and on epidermis of Skin. Although wounds and lesions were also observed on epidermal surface of the body. According to review of literature the fungal and fungi-like pathogens of fish has highlighted present knowledge gaps that need to be rapidly filled if future epizootics are to be control.

It has also indicated that epidemiological elements arising from other non-fish specific fungal pathogens could be used to refine our true understanding of present and future ecological impacts of these types of pathogens on global fish diversity.  Existing pathological data arising from fungal pathogen challenges of fish should be used to develop SEIR models (i.e., susceptible-exposed-infectious-recovered) specific to fungal pathogens and fish hosts. This would allow a simulation of the true extent of the ecological risk and provide elements for a better environmental monitoring and understanding of these species of fungal pathogens. These types of Aspergillus fumigatus and Aspergillus niger may be effects by fish even under the low temperature (20- 25oC) and stressed environmental conditions.