STUDIES ON IN VITRO EVALUATION OF ANTIBACTERIAL AND ANTIOXIDANT ACTIVITIES OF STERCULIA FOETIDA L. BARK

STUDIES ON IN VITRO EVALUATION OF ANTIBACTERIAL AND ANTIOXIDANT ACTIVITIES OF STERCULIA FOETIDA L. BARK

INTRODUCTION: With the advent of human civilization medicinal trees have been used both in the prevention and cure of various diseases of human and their pets. Primarily based on plant many system of therapy have been developed 1. Plants have been a source of food, fiber and medicine since the beginning and the use of plants and its products has a long history that began with folk medicine and through the years has been incorporated into traditional and allopathic medicine system 2.

Medicinal plants are natural sources of compounds that can be used against many diseases today 3. The discovery of many natural and synthetic drugs is a remarkable progress in the field of medicine which has been made by the advancement in Science and Technology 4. One of the most important therapeutic discoveries of the 20thcentury is antibiotics that had high effectiveness against serious bacterial infections. However, only one third of the infectious diseases known have been treated from these synthetic products 5.

Sterculia foetida L. is a tall, deciduous tree belonging to the family Sterculiaceae. It produces more or less whorled, horizontal branches. The follicles are woody, boat shaped and bright red when ripe. The seeds are black, ellipsoid, 2 cm long, 10 - 15 in each follicle and not winged 6. S. foetida has hidden potentiality for its medicinal and economical importance 1. Its gum could be used as controlled release matrix polymers 7. The seed crude extract of S. foetida acted as insecticide to Asian army worm and as antifeedent to the semi-polar, Achaea janata 8. S. foetida oil (3 %) in the diet definitely delayed sexual maturity of the female rat as determined by the criteria of age at the time vagina opened and the regularity and length of consecutive estrous cycles. Oil also used in the treatment of nausea and skin diseases 9.

The flavonoid content of S. foetida has anti-oxidant activity 10. The seed extract of this plant used as aperient, diuretic and as insect repellant 11. This plant have anti-fungal 12, laxative, astringent, carminative, anti-inflammatory and central nervous (CNS) depressant activity 13. The roasted seeds of this plant can be eaten like chestnuts, and also the seed have potentiality for treating diseases like itch, skin diseases 14, and rheumatism 15.

In the present investigation, n-hexane and methanolic extracts of Sterculia foetida L. bark have been evaluated for their antimicrobial and antioxidant activities.

The plant Sterculia foetida L. was collected from the “Chandaka reserve forest” area near Bhubaneswar, Odisha in the month of March, 2014. Identification of the voucher specimen was done by available literature 20. The voucher specimens were deposited in the herbarium of Post Graduate Department of Botany, Utkal University, Vani Vihar, and Bhubaneswar. The bark was collected in bulk amount, washed in running tap water, dried under shade and made to coarse powder form.

The collected bark was shade dried and ground to form coarse powder and had been successively extracted with the solvent n-hexane and methanol by Soxhlet apparatus 21 and the extract was recovered under reduced pressure in a rotatory evaporator. The extracts were kept in desiccators for further use.

Evaluation of the extracts for antibacterial activity:

Standard drugs used and preparation of doses for antibacterial assay:

Ciprofloxacin was used as Reference Antibiotics (RA). The stock solutions of RA were prepared in 10 % dimethylsulphoxide (DMSO) to give a concentration of 0.5 mg/ml for RA.

Agar well diffusion method 21 was followed to determine the zone of inhibition of microbes in Nutrient Agar (NA, Hi Media Laboratories Ltd., Mumbai). Plates were swabbed (sterile cotton swabs) with 8 hr old broth culture of bacteria. Wells (8 mm diameter and about 2 cm apart) were made in each of these plates using sterile cork borer. Stock solution of plant extracts were prepared at a concentration of 3 mg/ml and about 50 µl of the  solvent extracts were added aseptically into the wells and allowed to diffuse at room temperature for 2 hrs. Control experiments comprising inoculums without plant extract were set up. The plates were incubated at 37 °C for 24 hrs for bacterial pathogens. Triplicates were maintained and the diameter of the zone of inhibition (mm) was measured and statistical analysis was carried out.

Antioxidant potential of the extract was estimated on the basis of the extract’s scavenging activity of stable DPPH radical. First 25 mg of extract was dissolved to 50 ml of methanol to prepare stock solution. Then 250, 200, 150, 100 and 50 µg / ml solution was prepared by diluting the stock solution. Then 1.5 ml of solution from the above was added to 1.5 ml of DPPH. This was kept in dark room for 20 min for allowing reaction. After that, absorbance or OD was measured by using UV Spectrophotometer at 517 nm against blank prepared. A blank was prepared without adding the extract. 10 mg of dry ascorbic acid was dissolved in 10 ml of methanol to prepare 5 different concentrations viz. 10, 20, 30, 40 and 50 µg / ml of ascorbic acid. That was used as standard. Lower the absorbance of the reaction mixture indicates higher free radical scavenging activity. The capability to scavenge the DPPH radical was calculated using the following equation:

The antioxidant activities of the extracts were expressed in IC50. 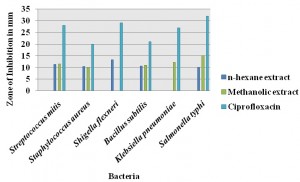 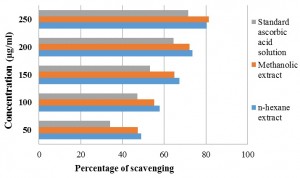 FIG.2 (i): IN VITRO ANTIOXIDANT ACTIVITY OF METHANOLIC AND n-HEXANE EXTRACTS OF STERCULIA FOETIDA L. BARK SHOWS PERCENTAGE OF SCAVENGING. 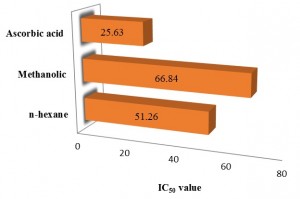 CONCLUSION: It was found that Sterculia foetida L. had a significant inhibitory effect against bacterial strains. The methanolic extracts of this plant showed more antimicrobial activity than n-hexane extract. The inhibitory effect of the extract of Sterculia foetida L. against pathogenic bacteria used in the present study indicates that the plant can be a potential candidate for various drug developments for the treatment of aliments caused by most of the pathogens. The n-hexane extract have more activity on Shigella flexneri where as its methanolic extract resulted in a better activity on Salmonella typhi. Since the n-hexane extract of Sterculia foetida registered lowest IC50 value, it showed highest antioxidant potential. Further Studies are recommended for the isolation of important chemical constituents which may be specific for the antibacterial and antioxidant activity.

ACKNOWLEDGEMENT: The authors are thankful to the Head, Post Graduate Department of Botany, Utkal University, Bhubaneswar, and Odisha, India for providing necessary laboratory facilities to conduct the study. The financial assistance received from the University Grants Commission, Govt. of India, and New Delhi in the form of Maulana Azad Fellowship to the first author is deeply acknowledged.

CONFLICTS OF INTREST: All the authors have none to declare.