STUDIES ON ISOLATION, PURIFICATION AND STRUCTURE ELUCIDATION OF CHEMICAL CONSTITUENTS FROM METHANOLIC FLOWER EXTRACT OF BLEPHARIS MOLLUGINIFOLIA PERS. AND THEIR BIOLOGICAL ACTIVITIES

STUDIES ON ISOLATION, PURIFICATION AND STRUCTURE ELUCIDATION OF CHEMICAL CONSTITUENTS FROM METHANOLIC FLOWER EXTRACT OF BLEPHARIS MOLLUGINIFOLIA PERS. AND THEIR BIOLOGICAL ACTIVITIES

ABSTRACT: Blepharis molluginifolia (Acanthaceae), is a threatened medicinal herb. The methanolic flower extract of Blepharis molluginifolia was subjected to Silica Gel Column Chromatography for purification of bioactive compounds and structure elucidation of active compounds were studied. DPPH and antimicrobial activities of two isolated compounds were studied. From the analysed data, the compounds identified were 5,7-Dihydroxy-3-(4-methoxyphenyl)chromen-4-one (BiochaninA) C16H12O5 and 5,7-Dihydroxy-3-(4-hydroxyphenyl) chromen-4-one (Genistein) C15H10O5. These compounds are first time reported in this plant. Another fraction GF1 was subjected to GCMS analysis and obtained 12 compounds  (aminoacid, gamma lactone, sugars and fatty acids).As GCMS profile contained majority of sugars antiglycation  was done against arbutrin and found >70% inhibition. The present investigation revealed that the methanolic flower extract contained phytoestrogens like Biochanin A and Genistein, the rare aminoacid pyroglutamic acid, gamma lactones, sugars and fatty acids.

INTRODUCTION: From pre-historical times, since the existence of human beings, plants have been used in primary health care. Usage of medicinal plants for phytocompounds has been increasing worldwide day by day. Plants are important for pharmacological research and drug development, not only when bioactive phytocompounds are used directly as therapeutic agents, but also as starting materials for the synthesis of drugs or as models for pharmacologically active compounds.

Regulation of their exploitation and exportation is therefore essential to ensure their availability for the future 1. Blepharis molluginifolia belongs to the family Acanthaceae, is a threatened medicinal herb. This plant is used for urinary discharges and also equated with Uttangana 2. Isolation of pure, pharmacologically active constituents from plants remains a long and tedious process. It is necessary to have methods available for efficient separation from plant extracts, which are typically mixtures of thousands of different molecules 3.

The common approach is to set up a fractionation scheme and to screen the fractions for the presence of the desired bioactive properties. Active fractions are sub fractionated and tested, until the molecules responsible for the bioactivity can be identified. Thin-layer chromatography (TLC) and silica gel column chromatography are the simplest and cheapest methods of detecting plant constituents because the method is easy to run, reproducible and requires little equipment 4, 5. High performance liquid chromatography can be used for good sensitive detection for purity of bioactive compounds 6, 7. Modern analytical spectroscopic techniques like Fourier Transform Infrared spectroscopy (FT-IR) as Liquid chromatography elctrospray Ionization mass spectroscopy, play a important role in identification and characterization of bioactive compounds 8.

Fresh flowers of Blepharis molluginifolia were collected in the month of November and kept in sterile bags. This plant was collected in Koyathanda of Nallamala forest region, Andhra Pradesh, India. This plant is authenticated by Dr. S.B. Padal, Botany Department, Andhra University, Visakhapatnam and specimen has been deposited in Herbarium of Botany department with voucher number B.D.H-22220.

100gm of Blepharis molluginifolia flower powder was extracted with Soxhlet apparatus using solvent methanol nearer to its boiling point until it became colorless. The extracts were then concentrated to dryness using rotary evaporator.

Crude methanolic extract of Blepharis molluginifolia was subjected to Silica gel column chromatography to separate into its respective component fractions. Silica gel has been used as stationary phase and varying ratios of n-hexane, chloroform,, methanol and water  in increasing polarities. The glass column (80cm in length and 5cm in diameter) was taken, rinsed with hexane and completely dried before use. The column was covered with cotton plug .The column was packed with activated silica gel (70-230 mesh size) slurry with constant tapping. The crude methanolic extract (10g) was dissolved in little amount of methanol and mixed with silica gel (1:2 w/w), loaded onto the column.

The extract was eluted with increasing polarity of solvents. Following ratios were sequentially used  n-hexane: chloroform 100:0,  75:25,  50:50 and 25:75;  chloroform : methanol  100:0,  75:25,  50:50 and 25:75;  methanol and water 100:0,  75:25,  50:50,  25:75 and 0:100 at a flow rate of 10 ml per hour and 10 ml fractions were eluted and collected. Then the fractions subjected to TLC. Aliquots of fractions were spotted on base line of precoated silica gel TLC sheets and allowed  for few minutes until dried. Then the TLC plates were kept in TLC chamber saturated with solvent system. TLC plates were kept in iodine chamber to visualize the spots. Fractions with distinct spots and same Rf value were pooled for each solvent system and condensed using rotary evaporator.

The functional groups of isolated antioxidant compound were analyzed using Bruker alpha FT-IR instrument (Software opus 6.5). 1 mg of isolated bioactive compound was mixed with 100 mg potassium bromide and the mixture was compressed to prepare as small pellet. Then this pellet was analyzed under FT-IR spectrophotometer in the range of 349.053-7800.65cm-1 at room temperature.

Nuclear magnetic resonance (NMR) spectroscopy was performed to determine the structure of isolated bioactive compound. About 25 mg sample which was dissolved in 0.5 ml dmso-d6 which was used. 1H and 13C NMR spectra were recorded on NMR - Jeol / AL-400 MHz NMR instrument using deuterated dimethyl sulfoxide. The region from 0 - 12 ppm for 1H NMR and 0 - 200 ppm for 13C NMR was used for scanning. Trimethylsilane (TMS) was used as internal standard. The chemical shifts (δ) were expressed as parts per million (ppm) and the coupling constants (J) were indicated as hertz (Hz).

The GC-MS analysis of the F1 extract was run on a Hewlett-Packard GC–MS system (GC 5890 series II; MSD 5971A, Hewlett Packard, The fused-silica HP-20 M polyethylene glycol column (50 m x 0.2 mm, 0.2 mm thickness, Hewlett-Packard, was directly coupled to the mass spectrometer. The carrier gas was helium (1 ml/min). The program used was 4 min isothermal at 70°C, then 4°C /min to 180 °C and 10 min isothermal. The injection port temperature was 250°C and the detector temperature was 280°C. Ionization of the sample components was performed in the EI mode (70 eV)

DPPH assay of all pooled fractions was determined by using Mensor et al (2001).

The anti-glycation activity was determined as per the method of Matsura et al, 2002 11 with slight modifications. Bovine serum albumin (1mg/ml) and 0.5ml glucose (9%) with 100µl of GF1 and IF1 extract was incubated at 600C for 24hrs with control and blank. After the incubation, the reaction was stopped by adding 100µl of 100% TCA to 0.5ml of the above mixture and incubated at 4°C for 10min. The samples were centrifuged at 10000rpm for 15min and supernatant was discarded. The pellet was dissolved in 1ml 0.9% saline phosphate alkaline buffer pH 10 and then assayed for anti-glycation activity by borohydride assay. Arbutin was used as a reference standard. The percent inhibition of fructosamines by plant extracts was calculated by the equation

The inhibition of a-glucosidase activity was determined using the modiﬁed published method 12. One mg of a-glucosidase (Saccharomyces cerevisiae, Sigma-Aldrich, USA) was dissolved in 100 mL of phosphate buﬀer (pH 6.8) containing 200 mg of bovine serum albumin. The reaction mixture consisting 10 µL of GF1 and IF1 extracts separately at varying concentrations (0-100 µg/mL) was premixed with 490 µL phosphate buﬀer pH 6.8 and 250µL of 5mM p-nitrophenyl a-D-glucopyranoside. After preincubating at 37°C for 5 min, 250µL a-glucosidase (0.15unit/mL) was added and incubated at 37°C for 15 min. The reaction was terminated by the addition of 2000 µL Na2CO3 200 mM. a-glucosidase activity was determined spectrophotometrically at 400 nm on spectrophotometer UV-Vis (Shimadzu 265, Jepang) by measuring the quantity of p-nitrophenol released from p-NPG. Acarbose was used as positive control of a-glucosidase inhibitor. The concentration of the extract required to inhibit 50% of a-glucosidase activity under the assay conditions was deﬁned as the IC50 value.

Fractions (109-150) were eluted with 100%chloroform.These fractions showed significant antioxidant and antimicrobial activities. This fractions were pooled with TLC-single spot showed at Rf value of 0.59 and called as EF1. This EF1 fraction was further subjected to silica gel column chromatography. The chloroform extract (EF1) was rechromatographized (silica gel 60-120 mesh size) with hexane and increasing 5% of CHCl3 and with methanol until 100% methanol. Fraction E1eluted with chloroform-methanol (9.5: 0.5), showed one major spot with Rf value 0.5 in solvent system chloroform: methanol (7:3) and gives yellow colour with AlCl3 2% in methanol. These fractions were collected together, solvent evaporated to give white colour compound (Compound 1).

Fraction T1 eluted with chloroform-methanol (7:3) were found to contain major spot with Rf value 0.3. Fractions were collected together and evaporated to yield yellowish white colour compound (Compound 2). These two compounds were further subjected to HPLC analysis. 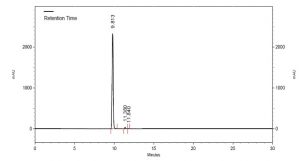 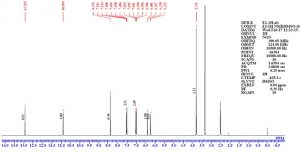 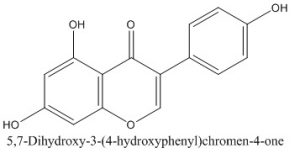 The fractions obtained from column chromatography (202-232) named as GF1 was subjected to Gas chromatography mass spectroscopy analysis. The peaks in the chromatogram were integrated and were compared with the database of spectrum of known components stored in the GC-MS library (NIST) were represented in the table. The GCMS profile showed aminoacid, gamma lactone, sugars and fatty acids. 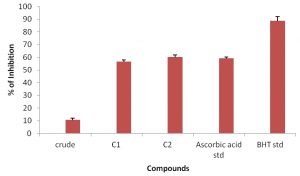 Each value represents mean ±SD of three independent experiments. The values are significant at p <0.05. The antimicrobial activity of C1 & C2 were compared with Streptomycin standard against tested microorganisms by disc diffusion method and were represented in Fig. 14 & 15 respectively. 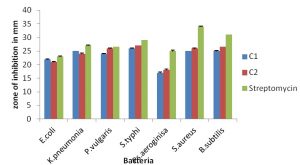 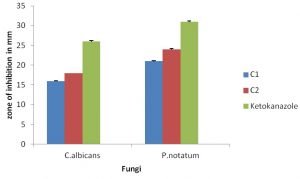 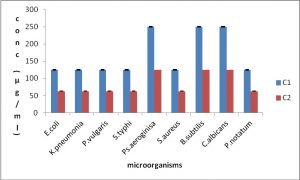 The antiglycation activity of fractions GF1 & IF1 were evaluated for the inhibition of advanced glycation endproducts (AGEs) formation and represented in the figure. The results indicated that GF1 fraction exhibited potential antiglycation activity (>70% inhibition) compared with arbutrin. α-Glucosidase inhibitors can be used as a new class of antidiabetic drug. By competitively inhibiting glycosidase activity, these inhibitors help to prevent the fast breakdown of sugars and thereby control the blood sugar level. The inhibitory effect of the selected fractions GF1 & IF1 were represented in the Table. The IC50 values showed that GF1 fraction (45.65μg/mL± 1.98) had statistically higher antiglycation activity than IF1 (16.91 μg/mL ± 1.060). 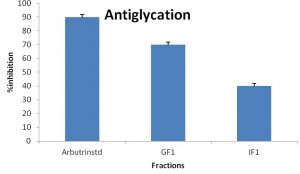 TABLE 3: IN-VITRO α-GLUCOSIDASE INHIBITION OF FRACTIONS GF1 AND IF1 OF B.MOLLUGINIFOLIA

CONCLUSION: In the present study, methanolic flower extract of B.molluginifolia was subjected silica gel column chromatography for purification of bioactive compounds. The purity of obtained fractions were analysed by TLC & HPLC. To the obtained fractions DPPH radical scavenging activity and antimicrobial activities were done. The highest activity shown fraction was subjected to further fractionation to yield two compounds. The structure of compound was elucidated by FT-IR, LC-ESI-MS and NMR spectroscopic techniques. From analysed data the compounds were 5,7-Dihydroxy-3-(4-methoxyphenyl) chromen - 4 - one (Biochanin A) C16H12O5 and 5,7-Dihydroxy-3-(4-hydroxyphenyl) chromen – 4 - one (Genistein) C15H10O5. No one reported these compounds in this plant.

The antioxidant and antimicrobial activities of C1 & C2 were higher when compared with crude extracts and showed significant fold increase.

The results of the present investigation was similar to the ethnobotanical usage of the studied plants which possess several phytoconstituents with biological activity. Based on the present investigation, it is concluded that B.molluginifolia has potential source of bioactive compounds with great pharmaceutical value. The study can be extended, in vivo evaluation of bioactive compounds in novel drug discovery.

CONFLICT OF INTEREST: The authors declare there is no conflict of interest.

ACKNOWLEDGEMENTS: The authors are greatful to GITAM University for providing facilities to carry out this work.