There are various methods employed for the determination of oxcarbazepine in single- dosage formulations.

Pioglitozone, is chemically (RS)-5-(4-[2-(5-ethylpyridin-2-yl) ethoxbenzylthiazolidine-2, 4-dione. It is a drug that reduces the amount of glucose in the blood. It is in a class of anti-diabetic drugs called thiazolidinediones that are used in the treatment of type II diabetes 9.

Many analytical methods of analysis of pioglitozone have been reported by HPLC technique in their tablet dosage form before and 10-12 months after the expiry period using HPLC method and UV-visible spectroscopy 10-11.

Solvents and Chemicals: The   tablets of oxcarbazepine and pioglitazone belonging to the’ to-be-discarded’ lot of drugs were procured from a few pharmaceutical firms in Chennai. These tablets have crossed their expiry period by 10-12 months. Also similar  formulations within  the  expiry period  were  received  from  the  same  firms.  Working reference standards of the drugs were obtained from Pharma Analytical Lab, Pondicherry where the analysis was carried out.

Standard Stock Solutions: The stock solution of the drugs oxcarbazepine and pioglitazone were prepared by dissolving 25mg of each of the pure drug in two separate 100ml volumetric flasks containing 50ml of methanol each, filtered and sonicated for about 15 minutes.

Sample Preparation: The currently marketed pharmaceutical forms of oxcarbazepine and pioglitazone and their expired ones were assayed. Twenty tablets were pulverized and the powder amount equivalent to 25mg of the drug was weighed accurately, transferred to a volumetric flask, dissolved in 50ml of HPLC grade methanol and sonicated for about 15 minutes. The solution was filtered through a 0.45 µm membrane filter to separate insoluble portion. 5ml of the filtrate was taken in a 25ml standard flask and made up to the volume with the suitable mobile phase and mixed well. The same procedure was carried out for the expired tablets.

Each of these solutions of 20 µL was injected five times into the column and analyzed.

Each of the mobile phases was filtered through a 0.45µm millipore membrane filter and degassed. A Rheodyne 7725 loop injection with 20µL was used for the injection of the samples. Every filtrate was injected five times into the column. The composition and the flow rate of the mobile phase were programmed for the motor pump and delivered at a constant rate. The baseline was continuously monitored during this period. The peak area was recorded for every concentration by selecting the UV detector wavelength suitably so that there was less interference from mobile phase and to obtain highest sensitivity.

UV-Visible Spectroscopic Studies: For UV-Visible spectroscopic studies, the stock solution of the drugs were prepared by dissolving 25mg of each of the pure in 20mL of methanol in separate flasks. This stock was further diluted with methanol, filtered and sonicated to obtain solution of required drug concentration. With methanol as reference, the maximum UV absorbance of these samples was noted at their corresponding λmax with the double beam spectrophotometer. For both the drugs the absorbance values for various concentration was noted and the linear behavior studied. Each drug concentration in the chosen range was scanned five times to ensure the absorbance values. The drug content of the samples was calculated from their respective regression curves obtained from standard solutions using these absorbance values.

The results show that within these concentration ranges there was excellent correlation between peak-area ratio and concentration of each drug.

Assay: The validated HPLC method and the UV-Visible spectroscopic method were used in the analysis of the drug content of the current and the expired tablets of oxcarbazepine and pioglitazone. The area under the curve due to the drug and hence the drug content per tablet was computed from the formula given below;

Using the UV-Visible spectroscopic method the maximum  UV absorbance  of the current  and  expired samples  was  noted  at  their  corresponding  λmax. With methanol as reference, the drug content of the samples was calculated from their respective regression curves obtained from standard drug solutions by using these absorbance values. The statistical parameter and results are reported in table 2.

TABLE 2: EVALUATION OF OXCARBAZEPINE AND PIOGLITAZONE IN THE CURRENT AND EXPIRED PHARMACEUTICAL FORMULATIONS USING HPLC AND UV-VISIBLE SPECTROSCOPY 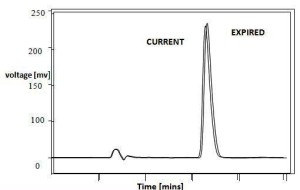 FIG. 1: OVERLAY OF CHROMATOGRAMS OF OXCARBAZEPINE BEFORE AND AFTER EXPIRY 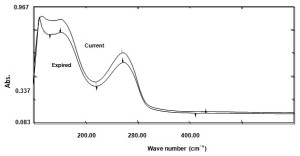 FIG. 2: OVERLAY OF UV-VISIBLE SPECTRUM OF PIOGLITAZONE BEFORE AND AFTER EXPIRY

The results were in close agreement to the label claim of the currently used pharmaceutical preparation of oxcarbazepine and pioglitazone and the relative standard deviation observed for both the drugs were very low. Whereas the results obtained for the expired tablets of oxcarbazepine and pioglitazone clearly showed that there has been a marked deterioration in the quantity of drugs in these tablets.

CONCLUSION: A simple, fast and accurate HPLC method has been adopted to quantify the amount of drugs oxcarbazepine and pioglitazone present in pharmaceutical formulations before and after 10-12 months of expiry period.  The regression of each of the drug concentration over the mean peak area obtained by HPLC method has been used to quantify the amount of drug present in the tablet forms. The HPLC results indicate that oxcarbazepine contains 102.83% of drug in the pharmaceutical dosage form, whereas the drug present is only 92.0% of the labeled amount, after expiry period.

In the case of pioglitazone, the drug content reduces to 91.86% after the expiry period from the actual value of 101.26%. Hence it is very clear that the drugs tend to deteriorate and lose their efficiency after the stipulated shelf life. Thus   HPLC and UV-Visible spectroscopy can be successfully employed for the estimation of drugs in pharmaceutical   dosage form. It is   highly suitable for   the routine analysis   of   the drugs to monitor the quality control of the drug products.