STUDIES ON PENETRATION ENHANCERS IN CORPORATED CREAM OF CLOBETASOL-17-PROPIONATE: DEVELOPMENT AND IN VITRO EVALUATION

STUDIES ON PENETRATION ENHANCERS IN CORPORATED CREAM OF CLOBETASOL-17-PROPIONATE: DEVELOPMENT AND IN VITRO EVALUATION

ABSTRACT: Topical corticosteroids have long been the chronic stage in the treatment of steroid responsive dermatitis. Creams containing 0.05% w/w Clobetasol-17-propionate (CP) as active ingredient are categorized as super potent class I topical dermatological corticosteroids. For the drug molecule to reach the cutaneous microcirculation, enhance, the systemic circulation, have to transverse both the lipophilic stratum cornium and much more viable epidermis. Penetration enhancers are thought to intact with one component of skin causing the stratum cornium to swell or leach out some of the structural component their by increasing the drug penetration to the barrier membrane. The current study was carried out to study the effect of various penetration enhancers such as oleic acid (OA), isopropyl myristate (IPM), polysorbate 80 (PS) and thymol (TM) on topical delivery of Clobetasol-17-propionate (CP) and was evaluated in-vitro using cellophane membrane as well as rat skin mounted in Franz diffusion cell. CP was analyzed spectrophotometrically at 240 nm. The efficiency of penetration enhancers to improvise topical delivery of CP was observed in the order of OA> IPM >PS>TM.

INTRODUCTION: Topical glucocorticoids (TG) are the most frequently prescribed drugs by dermatologists. Their clinical effectiveness in the treatment of psoriasis and atopic dermatitis is related to their vasoconstrictive, anti-inflammatory, immunosuppressive and anti-proliferative effects. Despite their benefit in the therapy of inflammatory diseases, TG is associated with number of side effects that limit their use1. Most TG is absorbed in quantities that can produce both systemic and topical side effects 2.

One of the approaches to reduce the systemic adverse effects of TG is to enhance their permeability so as to reduce the topically applied dose 3. Several approaches have been attempted, such as iontophoresis, electroporation or the application of penetration enhancers 4-5. However, the use of chemical penetration enhancers is the most widely used approach to increase topical and transdermal delivery.

Preparation of Oil phase: Cetosteryl alcohol was melted in a stainless steel vessel. To this Cetomacrogol 1000 was incorporated and allowed to melt. To the molten mass white soft paraffin and light liquid paraffin were added and were allowed to melt. The temperature of the oil phase was maintained at 65-70oC.

Preparation of Aqueous phase: Water was heated to 70oC. In this accurately weighed methyl paraben and propyl paraben were added and the temperature of the aqueous phase was maintained at 65-70oC.

Development of Drug solution: Propylene glycol in half the quantity to be used in respective formulation was heated up to 60oC. To this CP (0.05 g) were dissolved by frequent stirring the mixture. When the drug was dissolved completely the contents were transferred to the aqueous phase. The vessel was rinsed using the remaining one half of propylene glycol and the rinsing was again added to the aqueous phase developed above.

Development of CP Cream: Oily phase was then slowly incorporated in to the aqueous phase by maintaining the temperature at 60oC for at least 5 minutes. During this period emulsification will take place. Finally the mixture was allowed to cool while homogenizing, in order to obtain a cream. The prepared creams were then filled into the collapsible tubes. The tubes were properly sealed and labeled. These creams were then stored at room temperature away from direct sunlight.

Penetration Enhancer study 7:The present study is carried out to study the effect of various penetration enhancers such as oleic acid, isopropyl myristate, polysorbate 80 and thymol for enhancing the topical delivery of CP.

Evaluation of Cream: Conventional CP creams were evaluated in terms of following parameters:

Physical Characterization: The formulated creams were inspected visually for color, presence of any grittiness and feel. To evaluate the feel, the formulation was put in between the index finger and thumb and grittiness/smoothness was observed manually.

pH Determination 8:The pH of formulated cream was determined using pH meter. 1 g of cream was stirred in distilled water to get a uniform dispersion. Volume was made up to 100 mL. The electrode was immersed in cream distilled water dispersion and readings were recorded on pH meter.

Drug content 8:Each formulation (1g) was taken in a 100 mL volumetric flask, diluted with Ethanol and shaken to dissolve the drug in it. The solution was filtered through Whatman filter paper no. 42. The content of the drug was estimated spectrophotometrically by using standard curve plotted at λmax 240 nm.

Spreadability 9: An apparatus suggested by Multimer et al., (1956) was fabricated in the laboratory and used for the determination of spreadability of cream formulations. The apparatus consists of a wooden block, with a fixed glass slide and movable glass slide with one end tied to weight pan rolled on the pulley, which was in horizontal level with fixed slide. An excess of cream sample 2.5 g was placed between on the ground slide and sandwiched by another glass slides having the same dimensions as that of the fixed ground slide and provided with a hook.

A 1000g weight was placed on slides for 5 minutes to compress the sample to a uniform thickness and excess of the cream scrapped off from the sides. Weight (60g) was added to the pan. The time (seconds) required by top slide to cover a distance of 5 cm was noted. It was calculated using;

The temperature of the mixture was maintained at 37o±1oC and receptor solution was stirred with a magnetic stirrer at 600 rpm throughout the experiment. Care was taken that no air bubbles should be trapped under the membrane. Aliquots (2 mL) were withdrawn at regular interval of 1 h for a period of 8 h, and replaced with equal volume of freshly prepared ethanol and phosphate buffer saline pH 7.4 mixture equilibrated at 37° ± 1° C. All the samples were suitably diluted with diffusion medium and analyzed spectrophotometrically at 240 nm for Clobetasol 17-propionate content. The percent drug release was calculated for each time interval.

Viscosity and Rheological studies 9:The viscosity of the formulated cream was determined using Brookfield DV II+PRO Viscometer. In a clean and dry 250 mL beaker, take the test sample. Determine the viscosity of the test sample as per standard operating procedure of viscometer by using spindle no. 3 and 4. Viscosity of the sample find out at spindle speed of 0.3, 0.5, 0.6, 1.0, 1.5 and 2.0 rpm for ascending and descending order respectively. Dial reading calculated for the reading of viscosity, shear rate and shear stress.

Skin irritation test 12-14:The optimized cream formulation was evaluated for skin irritation studies using 15 mice (Grouped in 3 each group having 5 mice). The hair of the dorsal portion was removed applying a hair removal cream and the skin was washed properly one day prior to use.

The area shaved marked by marker for cream application. The application sites were examined for dermal reaction in accordance with draize scoring criteria. The erythema score were given from 0-4 depending upon the degree of erythema as 0- No erythema, 1- Slight erythema (Barely perceptible light pink), 2-Moderte erythema (Dark pink), 3- Moderate to severe erythema (Light red), 4- Severe erythema (Extreme redness)

Stability studies 9:The final formulation was also subjected to 25°C ± 2°C/60 ± 5% RH and 40°C ± 2°C /75 ± 5% RH conditions of temperature and relative humidity during stability studies. Formulation was evaluated for various parameters after one month. The parameters of the creams studied i.e. drug content, In vitro diffusion study, Viscosity and pH.

RESULTS AND DISCUSSION: Clinical effectiveness of Topical glucocorticoids in the treatment of psoriasis and atopic dermatitis is related to their vasoconstrictive, anti-inflammatory, immunosuppressive and anti-proliferative effects. Topical preparations are used for the localized effects at the site of their application by virtue of drug penetration into the underlying layers of skin or mucous membranes. Topical delivery includes external topical that are spread, sprayed, or otherwise dispersed on to cutaneous tissues to cover the affected area.

The compositions of the cream formulations were shown in table 1. From the result, it is clearly evident that all the formulations showed good extrudability, spreadability, drug content, viscosity and rheology. The physical characteristics were measured according to the methods described in the experimental part above, listen in table 2.

IR studies indicated that no chemical interaction between drug and excipients took place during prepration cream of CP. Drug content of the formulations for Clobetasol-17-propionate were well within the range between 93 % to 108 %. Viscosity of formulation ranged from 15 to 21 KcP. Rheological behavior of the semisolid is essential to achieve spreading, adherence of the skin, removal from containers and release of the drug from the bases. Selected formulation exhibited plastic behavior with thixotropy indicating the high quality of the developed formulation (Table 3 and fig. 2).

The diffusion data of F7 were treated with different kinetic equations to determine the order of release of Clobetasol-17-propionate and the coefficients of correlation (R2). The n- value for formulation F7 was found to be 1.261, indicating that the mechanism of drug release was super case II transport. This was supported by Korsmeyer-Peppas modal. The studied parameters for formulation, different drug release graphs as zero, first, higuchi, and korsmeyer-peppas modal are shown in fig. 3-6. The skin irritation test on mice shown in table 4, found no irritancy.  The developed cream formulations were subjected to the stability study as per ICH guidelines for the period of one month. The stability evaluation data were mentioned in table 5. The studied formulations was found to be stable and do not show any loss of drug content, change in % drug release, viscosity and pH. 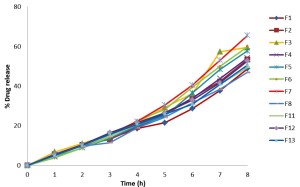