ABSTRACT: Enteric coating material that, was synthesized in the laboratory and applied to a tablet and also drug release profile was investigated. A polymeric material - Phthalic acid propane-1,2 diol-glycerol co-polyester (PPGC) was synthesized from phthalic acid and propane-1, 2-diol with 5% glycerol of total weight as a crosslinking agent using Dean-Stark apparatus with Ferric Chloride as catalyst and o-xylene as the reaction medium. The polymer was dissolved in volatile organic solvent (Ethyl acetate) to prepare coating solution. The coating solution was sprayed over the DS tablet in a small coating pan with continuous hot air flow. The coating pan was allowed to rotate until the solvent evaporated and the tablet dried. The percentage of drug release from di-chlofenac sodium (DS) core and coated tablets (coated by phthalic acid-propane-1, 2-diol-glycerol co-polyester) instimulated gastric fluid (pH = 1.2) and in stimulated intestinal fluid (pH = 7.4), was investigated and according to B.P. standard drug release profile was obtained.

INTRODUCTION: The synthesis and development of biodegradable polymer is one of the leading frontiers of research in polymer science of present time. Linear polyester such as poly lactic acid, poly glycolic acid etc. and network polyesters such as citric acid glycerol co-polyester are biodegradable and they are used for specialized applications, such as controlled drug formations, insecticide, pesticide and fertilizer carries as well as nontoxic surgical implant materials.

Tablet coating is recently a moderation of tablet formulation. Coating may be done defined as the process of compressing a granulating layer around the performed tablets. It is an additional step for manufacturing of tablets. Tablets are originally for the sake of pharmaceutical elegance by improving appearance, test and solubility. More recently coating has been used to control the site of drug release (Enteric coating) 1, 2, 3 and delay or prolong the release of drug from the dosage form (sustained action) hence the absorption of drug present.

The nature of coating varies; it may be simple or complex. In its simplest form it may merely consist of a thin film of varnish, applied to make the tablet dust free and reduce any bitter taste. In most complex form it may consist of inner and outer shell enclosing differ types of drugs 4, 5 which may be incompatible or are required to be released at a specific time.

For this we have taken up the project to synthesize a biodegradable polymer (Phthalic acid propane-1, 2diol-glycerol co-polyester) and using as an enteric coating material 8, 9.

In the present study our synthesized co-polyester was used as an enteric 10, 11 coating material and the results were investigated.

The following equipment’s were used in the investigation

iii) Plasticizers: The role of plasticizer is to improve the physical properties of the polymer film. One important property is their ability to decrease film brittleness. Commonly used plasticizer includes, PEG, propylene glycol, glycerol and its esters and phthalates esters. In general only water-miscible plasticizer can be used for aqueous based spray system.

For the preparation of standard curve of diclofenac sodium for its quantitative determination in the subsequent experiments, phosphate buffer solution of pH= 7.4 was used as the medium. Absorbance’s of some known solutions of the drug were measured at its λ max (274 nm) on a UV-VIS (Model: U-1800) spectrophotometer. The standard curve (Fig. 1) was constructed by plotting the absorbance of the drug against its concentration in the suitable region.

Film coating involves the deposition usual by a spray method of a thin film of polymer surrounding the core tablet. The coating liquid (Solution) contains a polymer in a suitable liquid medium together with other ingredient such as pigment and plasticizer. This solution is sprayed on a rotated mixed tablet bed. The drying conditions permit the removal of the solvent so as the leave a thin decomposition of coating material around each tablet core.

Diclofenac sodium is a non-steroidal anti-inflammatory drug (NSAID) with potent anti-inflammatory, analgesic and antipyretic properties. Gastrointestinal disterbances are the major adverse effects associated with diclofenac therapy and thus for oral administration, the drug is usually formulated as enteric-coated tablets. Enteric-coated dosage form release drug in the intestine and has been reported to decrease gastric irritation.

The dissolution studies for both the core tablets and the coated tablets were performed in order to evaluate the effect of the polymer on the release of the drug. A USP Type-XXII dissolution apparatus (paddle stirrer), Electrolab TDT-01 with a rotation speed of 50 rpm was used for dissolution experiments. A pH=1.2 solution was used as the simulated gastric fluid and a pH=7.4 buffer solution was used as the intestinal fluid. One liter of simulated gastric fluid heated at (37±0.5) ˚C was used initially for the dissolution studies which was replaced after 2 hours by 1000 ml of simulated intestinal fluid heated previously at (37±0.5) ˚C.

Samples (5ml) were withdrawn from the simulated gastric fluid at 30 minutes intervals for 2 hours and from intestinal fluid at 15 minutes intervals, which were immediately compensated with the same amount of fresh medium preheated at (37±0.5) ˚C. The amount of drug dissolved was calculated at 274nm using a UV-VIS (Model: U-1800) spectrophotometer with the help of the calibration curve (Fig 1). The in-vitro release studies were performed on five coated tablets and one core tablet.

From the degradation study it was found that, phthalic acid, propane-1, 2-diol-glycerol co-polyester remained intact in the gastric fluid (pH = 1.2) but gradually degraded in intestinal fluid (pH = 7.4). Enteric coating material resists the release of the drug form the core tablet in the gastric environment but it aids drug release in the intestine. In this study, it was found that the polymer did not degrade or swell in the gastric fluid when coated on a core tablet for as long as two hours. (Table 1, Fig 1). But in the intestinal fluid it gradually degraded and thereby helped drug release from the core tablet (Table 2, Fig 2). The mean (± SEM) present release of DS from the core & coated tablets is given in Fig. 3 that corresponds to the BP drug release profile from enteric-coated tablets.

So, phthalic acid, propane-1, 2-diol-glycerol co-polyester might be used as an enteric coating material. One of the advantage of this coating material is that, no plasticizer was required to add to the formulation as the polymer itself has got sticky property. 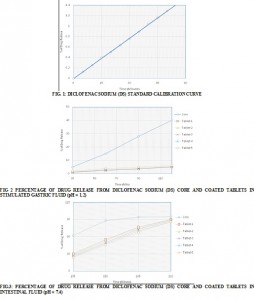 ACKNOWLEDGEMENT: The research work was investigated in the Polymer Research Laboratory, Department of Applied Chemistry & Chemical Engineering, University of Rajshahi. I am also grateful to all respectable members of Central Science Laboratory University of Rajshahi for their cordial help and constant activities during analysis time.