STUDIES ON PHYTOCHEMICAL COMPOUNDS AND ANTIOXIDANT POTENTIAL OF AURICULARIA AURICULA-JUDAE

STUDIES ON PHYTOCHEMICAL COMPOUNDS AND ANTIOXIDANT POTENTIAL OF AURICULARIA AURICULA-JUDAE

In Asian countries, many traditional foods are recognized as well-documented medicinal plants and are formulated as functional food ingredients to prevent acute and chronic diseases 4. Phytochemicals, especially phenolics in fruits and vegetables, are suggested to be the major bioactive compounds for health benefits 5. Mushrooms constitute an integral part of the normal human diet and are considered as valuable health food supplement since they are low in calories, fats and essential fatty acids and high in digestible carbohydrates, proteins, vitamins and minerals 6. It also contains various polyphenolic compounds recognized as an excellent antioxidant due to their ability to scavenge free radicals by single electron transfer. Now-a-days, there is an increased interest in consumption of mushrooms as food in India and all over the world because of its high therapeutic values 7.

Auricularia auricula-judae is a non-toxic edible mushroom belongs to Heterobasidiae family. It has been first cultivated in China more than thousand years ago. It is also known as “Judas’ Ear” in English, “Kikurage” in Japanese and “Mu Er” in Chinese. It is used as a popular ingredient in Chinese cuisines and is also known for its pharmaceutical effects in traditional Chinese medicine. The fruiting body of A. auricula is highly nutritious with a high content of carbohydrates, proteins, amino acids, trace elements and vitamins 8. Recently, mushroom researchers have become interested in finding new functional and bioactive compounds in A. auricula, with many biological functions, including anticoagulant, antitumour, hypolipidemic and immunobiological activities 9. The primary objective of this study is to investigate the antioxidant properties and bioactive components in the hot water extract of A. auricula-judae fruiting bodies using standard methods.

Preparation of the extract: Mushroom powder (10 g) was extracted by stirring with 100 mL of boiling water at 100 °C for 6 h. After centrifugation at 5000 g for 20 min, the residues were re-extracted twice with the boiling water. The supernatants were pooled together and the combined extracts were evaporated under reduced pressure at 45 °C for 30 min using a vacuum rotary evaporator. The extract obtained was dissolved in hot water at 100 mg/mL and stored at 4 °C for further use. From the stock solution, successive dilutions were made and used for all in vitro assays to analyze the antioxidant activity of the samples. Analyses were carried out in triplicates.

Total phenolic content: The total phenol in mushroom extract was measured according to the method of Singleton and Rossi (1965) 10 with some modifications. 1.0 mL of the sample was mixed with 1.0 mL of Folin-Ciocalteu’s phenol reagent. After 3 min, 1.0 mL of saturated sodium carbonate (35%) was added to the mixture and it was made up to 10 mL by adding deionised water. The mixture was kept for 90 min at room temperature in the dark. The absorbance was measured at 725 nm against the blank. Ferulic acid was used as the reference standard. The total phenol content is expressed as milligrams of ferulic acid equivalents (FAE) per gram of extract.

Total antioxidant activity assay (Phospho molybdenum assay):   The antioxidant activity of the sample was evaluated by the phosphor molybdenum method according to the procedure of Prieto et al., (1999) 12. An aliquot of 0.1 mL of sample solution was mixed with 1 mL of the reagent solution (0.6 M sulphuric acid, 4 mM ammonium molybdate and 28 mM sodium phosphate). The tubes were capped with silver foil and kept at 95 °C for 90 min. The tubes were cooled to room temperature and the absorbance of aqueous solution was measured at 695 nm against a blank. Gallic acid was used as a standard and total antioxidant capacity was expressed as gallic acid equivalents (GAE) per gram of extract.

DPPH free radical scavenging activity: The scavenging effect of mushroom extract on DPPH radicals was determined according to the method of Shimada et al., (1992) 13. Various concentrations of sample (4.0 mL) were mixed with 1.0 mL of methanolic solution containing DPPH radicals, resulting in the final concentration of DPPH being 0.2 mM. The mixture was shaken vigorously and left to stand for 30 min, and the absorbance was measured at 517 nm. The percentage inhibition was calculated according to the formula: (A0-A1)/A0] ×100, where A0 was the absorbance of the control and A1 was the absorbance of the sample.

Metal chelating activity on ferrous ions (Fe2+): The ability of the mushroom extract to chelate ferrous ions was estimated by the method of Dinis et al., (1994) 16. Briefly, 2.0 mL of various concentrations of the sample were added to a solution of 2 mM FeCl2 (0.05 mL). The reaction was initiated by the addition of 5 mM ferrozine (0.2 mL). The mixture was then shaken vigorously and left at room temperature for 10 min. The absorbance of the solution was measured spectrophotometrically at 562 nm. The percentage inhibition of ferrozine-Fe2+ complex formation was calculated as [(A0-A1)/A0] ×100, where A0 was the absorbance of the control, and A1 of the mixture containing the extract.

β-Carotene bleaching assay: The antioxidant activity of extract was evaluated by the β -carotene linoleate model system according to the method of Yae et al., 17. A solution of β -carotene was prepared by dissolving 2 mg of β -carotene in 10 mL of chloroform. Two millilitres of this solution were pipetted into a 100 mL round-bottom flask. After the chloroform was removed at 40 °C under vacuum, 40 mg of linoleic acid, 400 mg of Tween 80 emulsifier and 100 mL of distilled water were added to the flask with vigorous shaking. 4.8 mL of this emulsion were transferred into different test tubes containing 0.2 mL of different concentrations of the mushroom extract. The tubes were shaken and incubated at 50 °C in a water bath. As soon as the emulsion was added to each tube, the zero time absorbance was measured at 470 nm. A blank, devoid of β -carotene, was prepared for background subtraction. β-carotene bleaching inhibition was calculated using the following equation: (β -carotene content after 2 h of assay/initial β -carotene content) ×100.

Statistical analysis: All biochemical analyses were carried out in triplicates and the results are expressed as mean±SD. The data were analyzed using SPSS software. Analysis of variance (ANOVA) and Duncan’s multiple range test (DMRT) were used to analyze the differences among scavenging activity and EC50 of Auricularia auricula-judae for different assays with least significance difference (LSD), p<0.05 as a level of significance.

Quantification of phytochemical components: Mushrooms accumulate a variety of secondary metabolites, such as phenolic compounds, terpenes, polyketides and steroids. Among these secondary metabolites, phenolic compounds are well correlated with free radical scavenging activity, lipid peroxidation inhibition, reducing power, and metal chelation, probably due to their hydroxyl groups 18. Phenolic compounds such as flavonoids, phenolic acids, and tannins are considered to be major contributors to the antioxidant capacity of plants. These antioxidants also possess various biological activities, such as anti-carcinogenic, anti-inflammatory and anti-atherosclerotic activities 19. Table 1 represents the total phenols, and flavonoid content of Auricularia auricula-judae. The total phenolic and flavonoid contents were found to be 10.25 mg FAE/g extract and 5.36 mg QE/g extract respectively. Flavonoids are the most common and widely distributed group of plant phenolics, and are very effective antioxidant compounds 20. Therefore the total phenolic content is important for the antioxidant activity of mushroom extract 21.

The good antioxidant activity might be due to the presence of phytochemicals present in the extract. They might have complementary and overlapping mechanisms of action in the metabolism including, stimulation of the immune system, modulation of detoxification enzymes, delay of the oxidation process, modulation of hormone mechanism, and inhibition of the polymerization chain initiated by free radicals.

DPPH radical scavenging activity:  Free radical scavenging is one of the known mechanism by which antioxidants inhibits lipid peroxidation reactions. DPPH assay is considered as a valid and easy assay to evaluate radical scavenging activity of antioxidants 23. This method is based on the reduction of DPPH in alcoholic solution in the presence of a hydrogen donating antioxidant due to the formation of the non radical form DPPH-H in the reaction. A freshly prepared DPPH solution exhibits a deep purple color and generally disappears and gives yellow colour when an antioxidant is present in the medium. This reducing capacity of DPPH radicals were determined by the decrease in its absorbance at 517 nm 24. 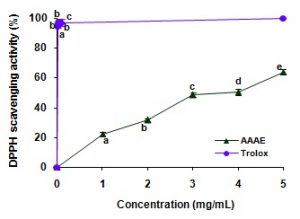 Therefore, the more quickly the absorbance decreases, the more potent the extract’s antioxidant potency. The DPPH radical scavenging activity of Auricularia auricula was presented in Fig. 1. At 1-5 mg/mL, scavenging abilities of Auricularia auricula on DPPH radical was 22.26%-63.91%, and the EC50 value was found to be 3.65 mg/mL. A significant difference (p<0.05) was found between the concentrations tested. The EC50 value of trolox was 0.022 mg/mL. These results indicated that, AAAE with its proton donating ability could act as primary antioxidants to scavenge DPPH free radical. 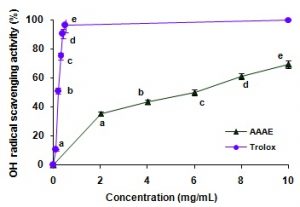 At concentrations of 2-10 mg/mL, the scavenging abilities were between 35.1%-69.31% for Auricularia auricula and at 0.1-0.5 mg/mL, the activity was between 10.32%-96.01% for trolox respectively. EC50 value of trolox (0.23 mg/mL) was better when compared to Auricularia auricula (6.11 mg/mL) and was found to be statistically significant (p<0.05). From the results, it was expected that the hot water extract from A. auricula would show antioxidant effects against LPO on biological membranes and scavenge the hydroxyl radicals and superoxide anions at the stage of initiation and termination of peroxy radicals. Overall the scavenging might be due to the active hydrogen donating ability of hydroxy substitutions.

Ferric reducing antioxidant power (FRAP) assay: FRAP assay is based on the ability of compounds (antioxidants) in the extract to reduce TPTZ-Fe3+ to intense blue TPTZ-Fe2+ complex with an absorption maximum at 595 nm 15. Ferric reducing power of A. auricula was found to be concentration dependent (Fig. 3). At 4 mg/mL, the reducing power was 0.403 for A. auricula which was found to be significantly lower than the standard, trolox (0.381 at 0.02 mg/mL). Ferric ions reducing ability of A. auricula and trolox based on EC50 values exhibited the following order: trolox (0.040 mg/mL) > A. auricula (7.35 mg/mL). 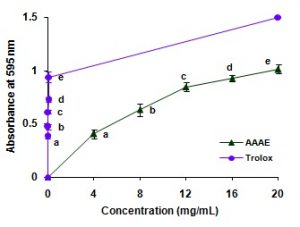 FIG. 3: FRAP ASSAY OF A. AURICULA AND STANDARD TROLOX AT DIFFERENT CONCENTRATIONS

A statistically significant difference (p<0.05) in reducing ability was observed with the concentrations tested. Our results demonstrated that A. auricula possesses more hydrogen donating ability which inturn indicates its significant reducing power.

Metal chelating activity on ferrous ions (Fe2+): Iron, in biological system, can stimulate lipid peroxidation by Haber-Weiss and Fenton-type reactions, resulting in the generation of hydroxyl radicals (OH-). Ferrous ions are commonly found in food systems and considered to be the most effective prooxidants 25. In the presence of chelating agents, ferrozine-Fe2+ complex formation is disrupted, thus resulting in the reduction of red color. Reduction therefore allows estimation of the chelating ability of coexisting chelator. The chelating abilities of A. auricula and EDTA showed concentration dependent increase from 37.31% to 61.57% (1 to 5 mg/mL) and 45.00% to 86.82% (0.01 to 0.05 mg/mL) respectively (Fig. 4). EDTA showed higher chelating ability on ferrous ions (EC50= 0.024 mg/mL) compared to A. auricula (EC50= 3.47 mg/mL) and these differences were statistically significant (p<0.05). These data revealed that A. auricula exhibited higher interference with ferrous and ferrozine complex formation and oxidative damage. 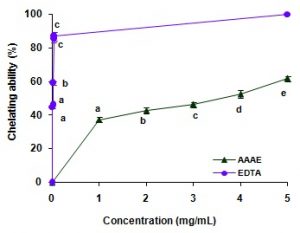 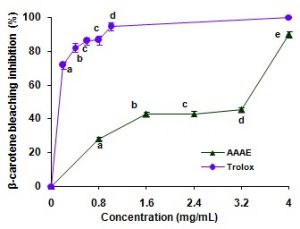 CONCLUSION: According to the results of the study, the hot water extract of Auricularia auricula-judae has different extents of antioxidant properties. Presence of substantial amounts of phenols and flavonoids may be responsible for its effective antioxidant potency. The results reveal that the consumption of Auricularia auricula mushrooms may protect the human body against oxidative stress by enhancing the antioxidant protection system. Further identification is in progress to analyse the chemical characteristics of these phytochemical components and to verify these activities in-vivo which may leads to the new drug formulation.

CONFLICT OF INTEREST:   The authors have no conflict of interest.