STUDIES ON POLYMORPHISM OF COMMERCIAL ASPIRIN AND ALBENDAZOLE TABLETS

STUDIES ON POLYMORPHISM OF COMMERCIAL ASPIRIN AND ALBENDAZOLE TABLETS

ABSTRACT: Aspirin is a common medication used to treat pain, fever and inflammation. It shows the property of polymorphism and two polymorphic forms were characterized till now (Form I and Form II). Albendazole is another common medication used for the treatment of variety of parasitic worm infestations. This drug also shows polymorphism where two forms (Form I and Form II) of it were characterized till date. Various commercial aspirin and albendazole tablets were collected, powdered and after proper clean up procedure their melting points were determined to identify the polymorphic form of each drug sample. The detection of polymorphic form was further carried out by infra red spectral analysis. It was found that all the commercial aspirin samples under study belong to the polymorphic form II which is usually used in drug formulation. Polymorphic studies on commercial albendazole tablets showed that all the samples under investigation belong to the polymorphic form I which is commonly marketed.

INTRODUCTION: Polymorphism comes from the Greek word, ‘polus’ means many and ‘morph’ means shape. Polymorphism is defined as the ability of a substance to exist as two or more crystalline phases that have different arrangements or conformations of the molecule in the crystal lattice. It essentially means that in different polymorphs, the same molecule exist in different ways. Polymorphism is highly significant in pharmaceutical industry. A new polymorph can be catastrophic; overnight a drug manufactured for market can become less soluble and less bioavailable. Although a compound’s polymorphs are chemically identical, their physical properties can be tremendously different. A new polymorph can appear suddenly in a manufactured drug, with devastating results.

Although chemically identical, the new polymorph can have very different physical properties. It is estimated that 30 - 50% of pharmaceutical compounds exhibit polymorphism. All these reasons lead to the studies on polymorphism in various pharmaceutical samples and to find out methods to control it in industry 1 - 6.

Aspirin, also known as acetylsalicylic acid is a medication used to treat pain, fever, and inflammation. Aspirin is one of the most widely used medications globally with an estimated 40,000 tonnes (50 to 120 billion pills) being consumed each year. It is on the World Health Organization's list of essential medicines, the most effective and safe medicines needed in a health system.

The synthesis of aspirin is an esterification reaction. Salicylic acid is treated with acetic anhydride causing a chemical reaction that turns salicylic acid's hydroxyl group into an ester group (R-OH → R-OCOCH3). This process yields aspirin and acetic acid, which is considered as a by-product of this reaction.

Aspirin shows polymorphism and two polymorphic forms of aspirin were characterized. These forms are named as Form I and Form II.

Albendazole is a medication used for the treatment of a variety of parasitic worm infestations. It is useful for giardiasis, trichuriasis, filariasis, neurocysticercosis, pinworm disease etc. and is taken by mouth. Albendazole is a broad-spectrum antihelminthic agent of the benzimidazole type. Albendazole was developed in 1975 and is on the World Health Organization's list of essential medicines, the most effective and safe medicines needed in a health system. Albendazole having chemical name methyl- [6- (propylthio)- lH- benzoimidazol-2-yl] carbamate is a member of the benzimidazole compounds. Albendazole also shows polymorphism whereas two polymorphs (form I and II) were characterized till now.

MATERIALS AND METHODS: A commercial aspirin and albendazole tablet have been collected from various medical shops in and around Manjeri, Kerala and is listed in Table 1.

The collected drug samples were finely powdered and proper clean up procedure was carried out as in literature 12 - 13. The dried samples were recrystallised in water and ethanol and the melting point was determined by using a digital melting point apparatus. The obtained results were compared with the authentic values reported in literature. The infra red spectra of drug samples were recorded by Jasco FT-IR double beam spectrophotometer. The obtained infra red spectra was analysed and peaks due to various functional groups were identified. Moreover the obtained spectra were compared with the reported one in the literature.

RESULTS AND DISCUSSION: The polymorphic study of commercial aspirin and albendazole tablets was carried out by determining its melting point. The melting point determination is done in triplicate and all results are tabulated in Table 2 and in Table 3.

All the aspirin tablets have melting point in the range 122 - 125 °C. This shows that all the aspirin samples under investigation belong to polymorphic form II. All the albendazole tablets under study have melting point in the range 216 - 220 °C and belong to polymorphic form I. Polymorphic form II is commonly used for commercial preparation of aspirin and form I of albendazole is used for manufacture of drug which is reported elsewhere 14- 18. The infra red spectra were recorded from KBr pellets using Jasco FT-IR 4100 spectrophotometer (Japan) and is shown in Fig. 1 and in Fig. 2. 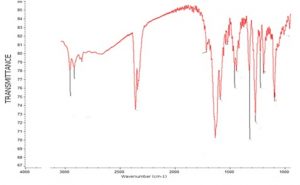 The infra red spectrum of albendazole (Zental) shows the following peaks. The peak at 2750 cm-1 belongs to N-H stretching, peak at 1740 cm-1 shows the C=O stretching. A sharp peak at 3050 cm-1 indicates the presence of C-H stretching and a medium C=C peak at 1600 cm-1. Presence of all these peaks leads to the conclusion that the drug sample is albendazole which was further proved on comparison with the infra red spectrum available in literature.

CONCLUSION: Aspirin is the common analgesic and antipyretic drug used today whereas albendazole is used for the treatment of a variety of parasitic worm infestations. Various commercial aspirin and albendazole drug samples were collected and their polymorphic state is determined by melting point determination. The results obtained clearly confirm that all the aspirin drugs under study belong to Form II and that of albendazole belong to form I. These drug samples were further analysed by infra red spectral analysis and can further be done by advanced techniques like NMR, XRD, SEM, TEM etc.

ACKNOWLEDGEMENT: Authors are grateful to Principal and Management of N. S. S. College, Manjeri for the support and encouragement.

CONFLICT OF INTEREST: We hereby declare that we have no conflict of interest