ABSTRACT: The homo and hetero interaction in the binary mixtures of Ethyl acetate + n-Butylamine, Ethyl acetate + Cyclohexylamine and Ethyl acetate + Diethylamine has been investigated through the orientation of dipoles using dielectric polarization method. The dielectric and thermodynamic parameters such as Kirkwood correlation factor, Excess permittivity, Bruggemann factor and Dipolar excess free energy for the above systems have been calculated from the experimentally measured values of capacitance and refractive index of solutions, at temperatures 303K, 313K and 323K.In all the studied systems, the dielectric parameters obtained show systematic change in the molecular structure with the concentration of amine in the solution. It indicates that the β-multimer formation due to the presence of hetero interaction between the components of above mixtures.

INTRODUCTION: The pharmaceutical sciences are a group of interdisciplinary areas of study concerned with the design, action, delivery, disposition, inorganic, physical, biochemical and analytical biology, epidemiology, statistics, chemometrics, mathematics, physics and chemical engineering, and apply their principles to the study of drugs. Compounds used as medicines are most often mixture of organic compounds. Therefore it is seemed important to examine the molecular interaction studies on the mixture of organic liquids 1. Dielectric studies are of great help in the assignment of the molecular structure or configurations, particularly those of organic compounds 2.

In this study, Ethyl acetate has been used as a solvent and n-Butyl amine, Cyclohexylamine and Diethyl amine as solute. Ethyl acetate is a moderately polar solvent that has the advantage of being volatile, relatively non-toxic, and non-hygroscopic. It is a weak hydrogen bond acceptor, and is not a donor due to the lack of an acidic proton. In the pharmaceutical industry it is an important component in extractants for the concentration and purification of antibiotics. It is also used as an intermediate in the manufacture of various drugs. And amines are used in the production of pesticides, pharmaceuticals, rubber chemicals, emulsifiers 3 and also used as an intermediate in synthesis of other organic compounds 1. A survey of literature shows that a few workers 4-5 have tried to investigate some binary systems taking amines as one of the constituent components in the binary mixtures. The objective of this paper is to investigate the molecular interaction between amine and ester molecules through dielectric study of the above systems at temperatures 303K, 313K and 323K.It makes one to understand the solute-solvent interaction and liquid structure 6.

THEORY: The determination of the structure and properties of associated liquids could provide deeper insight into the phenomena of the molecular interactions and is of great importance in Biology and Chemical Physics. The IR and NMR spectroscopic methods were extensively used for determining the nature of association. However, these methods could give only circumlocutory information regarding the alignment of neighboring molecules. This vital information could be obtained from dielectric measurements by virtue of its influence on the correlation between the permanent dipole moments in such a molecule. There are various mixture formulae with which one can correlate dielectric parameters with molecular activities in liquid.

The Kirkwood model: The Kirkwood correlation factor is a measure of the short- range interaction between the components in the liquid mixtures. For pure liquids and liquid mixtures, it can be described by the following expression7-10

Where m is the dipole moment in the gas phase, r is the density at temperature T, M is the molecular weight, k is the Boltzmann constant, N is the Avogadro’s number, eo is the static permittivity ande¥  is thestatic permittivity at high frequency, often represented by the square of refractive index corresponding to sodium D-line. X is the volume fraction and suffices m, A and B represents mixture, liquid A and liquid B respectively.

Excess permittivity (εE): The excess static permittivity is used to explain the formation of mutimers in the mixture11-12. It is defined as,

The excess permittivity provides qualitative information about multimer formationin the mixture as given below. If

εE = 0 indicates that there is no interaction between the unlike molecules.

εE > 0 indicates that the two liquids interact in such a way that the effective dipoles increase. This may be due to the formation of monomers and dimers.

Where a is a numerical fitting parameter known as Bruggeman parameter. The value of a contain information regarding the nature of interaction between solute and solvent, as follows.

a > 1 indicates that the effective microscopic volume of solvent gets more than actual  volume. The solute exerts a repulsive force in the system.

a < 1 indicates that the effective microscopic volume of solvent gets less than actual  volume.

The solvent exerts an attractive macroscopic force in the system.

a = 1 indicates no change in effective microscopic volume of the system and corresponds to the ideal Bruggeman mixture factor.

Dipolar excess free energy (DFE): The excess Helmholtz free energy of mixing DFE is given by 14,

This first term DF0E in equation (7) represents the excess dipolar energy due to long-range electrostatic interaction.

The third term DFABE gives the excess dipolar energy due to short-range interaction between dissimilar molecules.

The term Rfro and Rfr which give the reaction field parameters in the pure liquid and in the mixture, are given by,

It gives excess thermodynamic functions in binary mixtures that take into account the contribution due to both short-range and long-range dipolar interactions between both like and unlike molecules is adopted for polar-nonpolar mixtures.

MATERIALS AND METHODS: Compounds used in the present study were of AR grade and were all procured from SRL, India. The static permittivity eom at 1 KHz was measured using a digital VLCR-7 meter supplied by M/S Vasavi electronics, India, after calibrating it for standard liquids like carbon tetrachloride, benzene, toluene and chlorobenzene.

The permittivity at optical frequency e¥m was obtained by squaring the refractive Index for sodium D-line, which was measured with the help of an Abbe’s refractometer. The uncertainties in static permittivity, refractive index and density were ±0.0005, ±0.0002 and ±0.0001 g/cc respectively.

In all the systems, the geff value increases with the increase in concentration of amine in the solution. For pure Ethyl acetate, geff<1, indicates the anti-parallel orientation of dipoles. The geff values increase above unity in amine rich region indicating the parallel alignment of dipoles in this region. This indicates that intermolecular interaction between Ethyl acetate and amine increases with increase in the number of amine molecules in the solution. Similar behavior is observed at all temperatures for other amines used in this study. Thenappan et al., 15 have concluded on similar lines for the mixture of ester and acid.

The interaction between the unlike molecules produces an electric field which makes the dipoles to have parallel orientations 16. In all mixtures studied, the value of gf is less than unity for all concentrations and temperatures. This may indicate the presence of a weak interaction between acetate and amine molecules 6.

In all the systems, for all the three studied temperatures, values of DF0E, is positive indicating the existence of the long-range dipole-dipole interaction. The variation in the magnitude of DF0E value with concentration of one of the components and temperatures implies that the variation in the strength of the hetero interaction 17. For all the systems at all the three studied temperatures, DFrrE value is negative. This indicates that the existence of short-range interaction between the amine molecules. Conclusion on similar lines has been reported by Thenappan et al 18.

The magnitude of DFrrE suggests that the strength of the interaction is weak. Negative value of DFrrE shows the structure making property of the amine molecules. Similar views have been expressed by Thenappan et al 19-20. The magnitude of DFABE indicates the existence of a weak hetero interaction between the components in the mixtures. Values of DFE for all the systems at all the three studied temperatures are positive, which implies the formation of β-multimers with anti-parallel orientation. The electric field created inside the mixture is such that it favors anti-parallel alignment between the dipoles. Similar views have been expressed by Gupta et al 4. 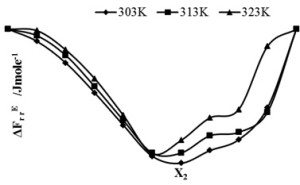 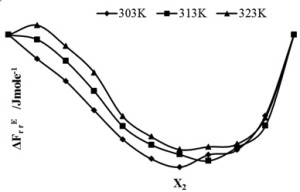 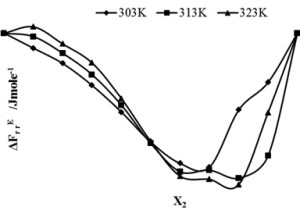 CONCLUSIONS: Values static permittivity, e0m and the permittivity at optical frequency, e¥m, which was by square of the refractive Index for sodium D-line, for ester – amine mixtures, are used to evaluate Kirkwood linear correlation factor, excess permittivity, Bruggeman factor and dipolar excess free energy of mixing.

The values of these parameters have been reported for various temperatures and concentrations. These results are used to interpret liquid structure in above mixtures.