ABSTRACT: The main aim of this study was to develop Mebeverine colon specific drug delivery system with increased stability of drug in stomach and small intestine. This stability of drug was achieved by coating of the drug core with Chitosan and Ethyl cellulose polymers by direct compression using tablet punching machine. Mebeverine was a drug whose therapeutic role is in the treatment of Irritable Bowel Syndrome and the associated abdominal cramping. It works by relaxing the muscle in and around the gut. It was a musculotropic antispasmodic drug without having anticholinergic side effects. The drug is also indicated for gastrointestinal spasm secondary organic disorder. The colon is a site where both local and systemic delivery of drugs can take place. Local delivery allows topical treatment of inflammatory bowel disease. However, treatment can be made effective if the drugs can be targeted directly into the colon, thereby reducing the systemic side effects. This study, mainly compares the primary approaches for Colon Specific Drug Delivery namely prodrugs, pH and time dependent systems, and microbial triggered systems, which achieved limited success and had limitations as compared with newer CDDS namely pressure controlled colonic delivery capsules, and osmotic controlled drug delivery which are unique in terms of achieving in vivo site specificity, and feasibility of manufacturing process. Mebeverine act directly on the gut muscles at the cellular level to relax them. This relieves painful muscle spasms of the gut, without affecting its normal motility.

INTRODUCTION: Targeted drug delivery into the colon is highly desirable for local treatment of a variety of bowel diseases such as ulcerative colitis, Crohn’s disease, amebiosis, colonic cancer, local treatment of colonic pathologies, and the systemic delivery of protein and peptide drugs 1, 2.

The colon specific drug delivery system (CDDS) should be capable of protecting the drug that entered in the route to the colon i.e. drug release and absorption should not occur in the stomach as well as the small intestine, and neither the bioactive agent should be degraded in either of the dissolution sites, but only released and absorbed once the system reaches the colon 3. The colon is believed to be a suitable absorption site for peptides and protein drugs for the following reasons; (i) less diversity, and intensity of digestive enzymes, (ii) comparative proteolytic activity of colon mucosa is much less than that observed in the small intestine, thus CDDS protects peptide drugs from hydrolysis, and enzymatic degradation in duodenum and jejunum, and eventually releases the drug into ileum or colon which leads to greater systemic bioavailability 4. And finally, because the colon has a long residence time which is up to 5 days and is highly responsive to absorption enhancers 5. Mebeverine has absorption rate of peak plasma concentration within 1-3 hours. The half life of Mebeverine is 1 hour and it has protein binding 75% to albumin 6.

Oral route is the most convenient and preferred route but other routes for CDDS may be used. Rectal administration offers the shortest route for targeting drugs to the colon. However, reaching the proximal part of colon via rectal administration is difficult. Rectal administration can also be uncomfortable for patients and compliance may be less than optimal 7. Drug preparation for intra rectal administration is supplied in the form of solutions, foam, and suppositories. The intra rectal route is used both as a means of systemic dosing and for the delivery of topically active drug to the large intestine. The concentration of drug reaching the colon depends on the formulation factors, the extent of retrograde spreading and the retention time. Foam and suppositories have been shown to be retained mainly in the rectum and sigmoid colon where as the enema solutions have a great spreading capacity 8.

Because of the high water absorption capacity of the colon, the colonic contents are considerably viscous and their mixing is not efficient, thus availability of most drugs to the absorptive membrane is low. The human colon has over 400 distinct species of bacteria as resident flora, a possible population of up to 1010 bacteria per gram of colonic contents. Among the reactions carried out by these gut flora are azoreduction and enzymatic cleavage i.e. glycosides 9. These metabolic processes may be responsible for the metabolism of many drugs and may also be applied to colon-targeted delivery of peptide based macromolecules such as insulin by oral administration 10-15.

Materials: Mebeverine was obtained as gift sample from Dr Reddy’s laboratories. Ethyl cellulose and Chitosan were obtained from Qualichem Fine chem. Pvt ltd. Micro crystalline cellulose pH-102 and Magnesium stearate was obtained from Molychem laboratory. All other ingredients used were of analytical grade. The experiment was performed in the year 2014 at Malla Reddy College of Pharmacy.

Analytical Method for Mebeverine: Accurately 10mg of drug was weighed and placed in 10ml volumetric flask and dissolved in phosphate buffer of pH 1.2 and volume adjusted to 10ml. The standard solution of drug was subsequently diluted with phosphate buffer. To obtain a series of dilutions containing 2, 4, 6, 8, 10µg/ml of the solutions. The absorbance of the above dilutions was measured in double beam UV spectro-photometer at 263nm with a quartz cell of 10mm path length against phosphate buffer. A graph was plotted by taking concentration of Mebeverine µg/ml on x-axis and absorbance on y-axis and shown in Fig. 1. The concentration of drug was calculated using the linear regression equation of the calibration curve. This procedure was repeated with phosphate buffers 7.4 and 6.8.

Preparation of Mebeverine Core Tablets: Each core tablet consisted of Mebeverine, Magnesium stearate, microcrystalline cellulose. These materials were weighed, mixed and passed through a mesh to ensure complete mixing. These mixed materials were then compressed into tablets using 8mm round punch.

Angle of Repose: The internal angle between the surface of the pile of blend and the horizontal surface is known as the angle of repose. The Angle of repose was known by passing the blend through a funnel fixed to a burette stand at a particular height (4cm). A graph paper was placed below the funnel on the table. The height and radius of the pile was measured. Angle of repose of the blend was calculated using the formula:

Bulk Density: Bulk density is used as a measure to describe packing materials or granules. Bulk density is the ratio of given mass of powder and its bulk volume. It was determined by transferring an accurately weighed amount of powder sample to the graduated cylinder with the aid of a funnel. The initial volume was noted. Ratio of weight of the sample to the volume it occupied was calculated.

Hausner Ratio: It indicates the flow properties of the powder. The ratio of tapped density to the bulk density of the powders is called Hausner ratio.

Loss on Drying: The Loss on drying test is designed to measure the amount of water and volatile matters in a sample when the sample is dried under specified conditions. The loss on drying of the blend (1.5g) was determined by using Electronic LOD (helium lamp) apparatus at 105 °C 17-20.

Hardness Test: The crushing load which is the force required breaking the tablet in the radial direction and it was measured using a Monsanto Hardness Tester. The hardness of 10 tablets was noted and the average hardness was calculated. It is given in kg/cm2.

Friability: In friability testing the tablets are subjected to abrasion and shock. It gives an indication of the tablets ability to resist chipping and abrasion during transportation and shipping. If the tablet weight is ≥ 650mg 10 tablets were taken and initial weight was noted. For tablets of weight less than 650mg the number of tablets equivalent to a weight of 6.5g were taken. The tablets were rotated in the Roche Friabilator for 100 revolutions at 25 rpm. The tablets were dedusted and reweighed. The percentage friability should be not more than 1%w/w of the tablets is being tested. The percentage friability is expressed as the loss of weight and is calculated by the formula:

Drug Content Uniformity: For the content uniformity test, ten tablets were weighed and pulverized to a fine powder, a quantity of powder equivalent to 100mg of  Mebeverine was mixed with 100ml of methanol and allowed to stand for 30min with intermittent sonication to ensure the complete solubility of the drug and the total solution was filtered. The Mebeverine content was determined by measuring the absorbance at 263nm (using UV-vis spectrophotometer, Eloco) after appropriate dilution with distilled water. The drug content was determined using standard calibration curve. The mean percent drug content was calculated as an average of three determinations.

Wetting Time and Water Absorption Ratio (R): Twice folded tissue paper was placed in a Petri dish having an internal diameter of 5cm containing 6ml of water. A tablet was carefully placed on the surface of the tissue paper in the Petri dish. The time required for water to reach the upper surface of the tablet and to completely wet it was noted as the wetting time. Water absorption ratio (R) was then determined according to the following equation.

Where Wb and Wa were tablet weights before and after water absorption, respectively.

In- vitro Disintegration Time: Disintegration time is the time taken by the tablet to breakup into smaller particles. The disintegration test is carried out in an apparatus containing a basket rack assembly with six glass tubes of 7.75cm in length and 2.15mm in diameter, the bottom of which consists of a #10 mesh sieve. The basket is raised and lowered 28-32 times per minute in a medium of 900 ml which is maintained at 37 ± 20 °C. Six tablets were placed in each of the tubes and the time required for complete passage of tablet fragments through the mesh (#10) was considered as the disintegration time of the tablet 21, 22.

Dissolution Studies: Dissolution is a process by which the disintegrated solid solute enters the solution. The test determines the time required for a definite percentage of the drug in a tablet to dissolve under specified conditions. The dissolution test was carried out in USP Apparatus Type I (basket) with phosphate buffer 1.2 pH, 7.4 pH, 6.8 pH as the dissolution medium. The volume of buffer is 900ml. The temperature was maintained at 37 ± 2 °C and the rpm at 100.

The dissolution was carried in pH 1.2 buffer for 2 hours to mimic the gastric emptying time 10. After this 7.4 pH was changed into dissolution flask and dissolution was carried upto 3 hours to mimic small intestine pH. Then with 6.8 pH dissolution done until complete release of drug takes place. The samples were drawn at 30, 60, 90, 120 min. Fresh volume of the medium were replaced with the withdrawn volume to maintain the sink conditions. Samples withdrawn were analyzed for the percentage of drug released 23.

Stability Studies: Selected formulation is subjected to stability studies as per 40 °C / 75% Rh for 3months. Sample are taken and analyzed at time interval 24. 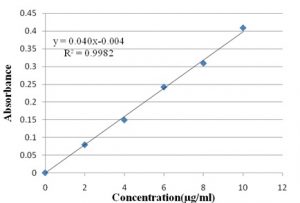 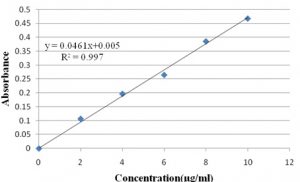 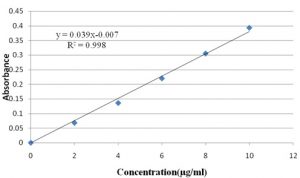 FTIR Compatability Studies Between Drug and Excipients: FTIR studies were performed on drug, excipients and it was found that there is no incompatability existing between them Twelve formulations of Mebeverine compression coated tablets were prepared by using Micro crystalline cellulose, Magnesium stearate, Chitosan and Ethylcellulose polymers (Table 1). Among these 12 formulations F12 (Table 7, Fig. 6) was found to be promising, which showed 95% of drug release up to 24 h. 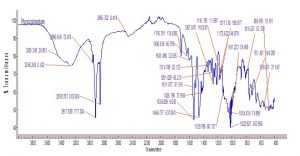 FIG. 4: FTIR GRAPH OF MEBEVERINE WITH ALL EXCIPIENTS IN THE FORM OF PHYSICAL MIXTURE 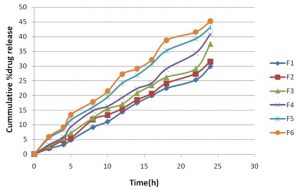 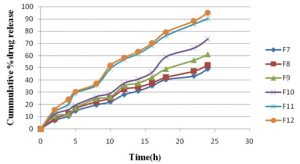 CONCLUSION: Chitosan and ethylcellulose in combination in the form of compression coated tablets is capable of protecting Mebeverine from being released in upper region of GI system, stomach and small intestine. The in vitro drug release studies indicated that formulation F12 was a promising system to provide targeting of Mebeverine to colon. It is concluded that the release lag time and release rate are able to be tailored through adjusting the formulation variables to achieve colon specific drug delivery of Mebeverine.