STUDIES ON THE DISINTEGRANT PROPERTIES OF SEED POWDER, HUSK POWDER AND MUCILAGE OF PLANTAGO OVATA BY FORMULATION OF ORALLY DISINTEGRATING TABLET

STUDIES ON THE DISINTEGRANT PROPERTIES OF SEED POWDER, HUSK POWDER AND MUCILAGE OF PLANTAGO OVATA BY FORMULATION OF ORALLY DISINTEGRATING TABLET

Tablet disintegration has received considerable attention as an essential step in obtaining fast drug release. Disintegrating tablets are intended to dissolve or disintegrate rapidly in the mouth for which various natural and synthetic disintegrants are included in the formulation. The present work emphasis on the study of disintegrant property of mucilage, Husk powder and seed powder of Isapghula. The Orally disintegrating tablet of Fexofenadine HCl (as model drug) was prepared by direct compression method using microcrystalline cellulose and Mannitol as direct compressible vehicle. These tablets were evaluated for quality control tests like organoleptic characteristics, weight variation, hardness, friability, in-vitro disintegration time, in-vitro swelling time, drug content and dissolution behavior. Swelling index was also investigated with an aim to compare the swelling property of seed powder, husk powder and mucilage of Plantago ovata. Among all the superdisintegrants, Plantago ovata mucilage showed the highest swelling index. Hence, the present study revealed that this natural superdisintegrant (Plantago ovata mucilage) showed similar disintegrating property than the most widely used synthetic superdisintegrants in the formulations of ODT.

INTRODUCTION: Recent advances in novel drug delivery system (NDDS) aims to enhance safety and by the formulating a convenient dosage form for administration to achieve the better patient compliance. One such approach is formulation of orally disintegrating tablets, these are useful for pediatric, geriatric and also dysphasia patients, leading to improved patient compliance 1. These dosage forms dissolve or disintegrate rapidly in the oral cavity within a matter of seconds without the need of water. Tablet disintegration has been considered as the rate limiting step in faster drug release.

Disintegrants are substances that are added to drug formulation that facilitate the breakup or disintegration of tablet content into smaller particles that dissolve more rapidly in aqueous environment 2. The various disintegrants includes synthetic derivatives such as sodium carboxy methyl cellulose, cross povidone, sodium starch glycollate, cross carmellose sodium, and natural derivatives such as alginates, cellulose, agar, locust bean, pectin, tragacanth, chitosan and gum karaya. Isapghula consists of dried seeds of the plant plantago ovata and it contains mucilage which is present in the epidermis of the seeds. Natural origin is preferred over semi-synthetic and synthetic substances because they are comparatively cheaper, abundantly available, non-irritating and nontoxic in nature.

Plantago ovata has gained importance as a traditional medicine throughout the world due to its best medicinal properties. Plantago ovata have various pharmaceutical formulation characteristics like binding, disintegrating and sustaining properties. Due to these properties it is largely used in pharmaceutical industry, food preparations, Ayurvedic medicine, Unani remedies, preparation of crude drugs, etc 3, 4, 5. Hence, in the present study, seed powder, husk powder and mucilage of Plantago ovata were used as superdisintegrants to develop ODTs of the Fexofenadine HCl.Fexofenadine HCl, is a non-sedating anti histamine used in the symptomatic relief of allergic conditions including seasonal allergic rhinitis and urticaria. The concept of formulating orally disintegrating tablets containing taste masked Fexofenadine HCl, offers a suitable and practical approach in serving desired objective of faster disintegration, dissolution characteristics, non-bitter with good mouth feel and increased bioavailability.

Preparation of seed powder and husk powder of Plantago ovata: The dried Plantago ovata seeds and husk were powdered by a hand automatic grinder and sieved through mesh no. (#80) and were stored in desiccator until use.

Isolation of Mucilage: The seeds of Plantago ovata were soaked in distilled water for 48 h and then boiled for few minutes so that mucilage was completely released into water.  The material collected was squeezed through muslin cloth for the filtering and separating out the marc. Then, an equal volume of acetone was added to the filtrate so as to precipitate the mucilage. The separated mucilage was dried (in oven at temperature less than 60°C), powdered, sieved (#80) and stored in a desiccator until use 3, 4.

Swelling index5: Swelling index (British Pharmacopoeia Vol. II, 1988) is the volume in milliliters that is occupied by 1 gm of drug or any adhering mucilage after it has swollen in an aqueous liquid for 4 h. The methods of studying swelling index for Plantago ovata were carried out as per BP specifications. Swelling index was calculated from mean readings of three determinations (Table 1).

Formulation of orally disintegrating tablets by direct compression method: Orally disintegrating tabletswere prepared by direct compression. All the ingredients were passed through # 60 meshes separately. Then the ingredients were weighed and mixed in geometrical order and compressed into tablets of 300 mg using 8mm round flat punches on ten station rotary tablet machine (Ratnakar). A batch of 30 tablets of each formulation was prepared for all the designed formulations 7, 8 (Table 2).

Values are expressed as Mean ±S.Da. n=3; a Standard deviation

Bulk density: Both loose bulk density (LBD) and tapped bulk density (TBD) were determined. A suitable amount of powder from each formulation, previously lightly shaken to break agglomerates formed, was introduced into a 10 ml measuring cylinder. After initial volume was observed, the cylinder was allowed to fall under its own weight on to a hard surface from a height of 2.5cm at 2 seconds intervals. The tapping was continued until no further change in volume was noted. LBD and TBD were calculated using following formula;

Angle of repose: Angle of repose (a) was determined using funnel method. The blend was poured through a funnel that can be raised vertically until a maximum cone height (h) was obtained. The radius of the heap (r) was measured and angle of repose was calculated;

Tan θ =h/r; Where θ is the angle of repose

Formulation of orally disintegrating tablets by direct compression method: Orally disintegrating tabletswere prepared by direct compression. All the ingredients were passed through # 60 meshes separately. Then the ingredients were weighed and mixed in geometrical order and compressed into tablets of 300 mg using 8mm round flat punches on ten station rotary tablet machine (Ratnakar). A batch of 30 tablets of each formulation was prepared for all the designed formulations 7, 8.

Post-compression parameters of powder blend 9: QC tests for ODTs of all formulations were performed, and the average values were calculated. All the tablets were evaluated for different parameters as appearance, weight variation, hardness, Thickness, friability, wetting time, water absorption ratio, Disintegration time, In vitro dispersion time, and In vitro dissolution study (Table 3).

Thickness variation: Ten tablets from each formulation were taken randomly and their thickness was measured with a micrometer screw gauge.

Hardness and Friability: Hardness of the tablets was measured using the Pfizer hardness tester. The friability of a sample of twenty tablets was measured using a USP type Roche friabilator (Pharmalab, Ahmedabad, India). Pre-weighed tablets were placed in a plastic chambered friabilator attached to a motor revolving at a speed of 25 rpm for 4 min. The tablets were then dusted, reweighed and percentage weight loss (friability) was calculated.

Wetting time: A piece of tissue paper (10.75×12 mm).folded twice was placed in a culture dish (d=6.5 cm) containing 6 ml of water. A tablet was put on the paper and the time for complete wetting was measured.

In vitro dispersion time: Tablet was added to 10 ml of phosphate buffer solution (pH 7.4) at 37±0.5°C. Time required for complete dispersion of a tablet was measured.

Drug content uniformity: For the content uniformity test, ten tablets were weighed and pulverized to a fine powder, a quantity of powder equivalent to 30 mg of Fexofenadine HCl was extracted into distilled water and liquid was filtered. The FXD HCL content was determined by measuring the absorbance at 259 nm (using UV-VIS Spectrophotometer, Shimadzu 1800) after appropriate dilution with distilled water. The drug content was determined using standard calibration curve. The mean percent drug content was calculated as an average of three determinations.

Values are expressed as Mean ±S.Da. n=3; a Standard deviation

Stability testing: Short-term stability studies on the optimize formulations (ODT3, ODT6 and ODT9) were carried out by storing the tablets in an amber colored rubber stoppered vial at 40°/75% RH over a 3 month  period. At an interval of 1 month, the tablets were visually examined for any physical changes, changes in drug content and in vitro disintegration time (Table 4).

RESULTS AND DISCUSSION: Orally disintegrating tablets of Fexofenadine HCl were prepared by direct compression method employing Plantago ovata, Seed Powder, Husk Powder and mucilage as super-disintegrants in different ratios along with microcrystalline cellulose. Directly compressible mannitol (Pearlitol SD 200) was used as a diluent to enhance mouth feel. A total of nine formulations and a control formulation ODTC0 (without super-disintegrant) were designed. The values of pre-compression parameters evaluated were within prescribed limits and indicated good free flowing property is given in Table 2.  The blends were free flowing (angle of repose <30°, and Carr's index <15%) tablets obtained were of uniform weight (due to uniform die fill), with acceptable variations as per IP specification i.e., below ±7.5%. The data obtained from post-compression parameters in all the formulations, friability is less than 1 %, indicated that tablets had a good mechanical resistance. Drug content was found to be in the range of 96.2-99.4, which is within acceptable limits. Hardness of the tablets was found to be in the range of 2.7-4.8 kg/cm2. The results of hardness, friability, drug content, and thickness were given in Table 3. Water absorption ratio and wetting time, which are important criteria for understanding the capacity of disintegrants to swell in presence of little amount of water were found to be in the range of 48-84% and 88-164sec. respectively. 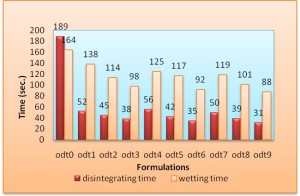 The results shows time required for complete wetting of tablets as function of concentration. Water uptake increased with increase of concentration of disintegrants. The percentage drug content of all the formulations was found to be in between 96.2-99.4 for Fexofenadine HCl which was within the acceptable limit. The cumulative percentage drug released by which each tablet in-vitro release studies was based on the mean content of drug present in respective tablet. The in-vitro dissolution profiles of prepared tablets are shown in Fig 3, 4, 5. 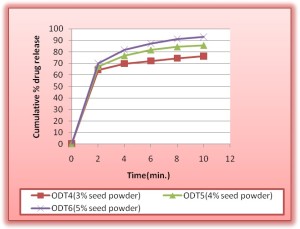 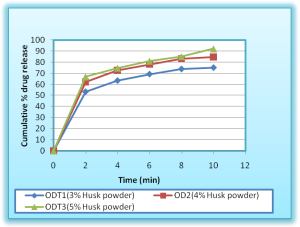 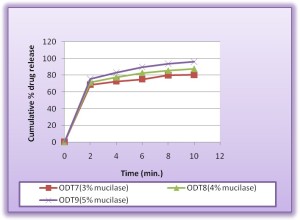 Among all the designed formulations, three formulations (table 5), viz., ODT3, ODT6 and ODT9 were found to be promising and displayed an in vitro dispersion time ranging from 31 to 56sec., which facilitates their faster dispersion in the mouth. Overall, the formulation ODT3, ODT6 and ODT9 containing 5% w/w of Plantago ovate, Seed Powder, Husk Powder andmucilage 30 % w/w of microcrystalline cellulose was found to be optimize (Table 6) and has shown an in vitro disintegration time of 31 sec., wetting time of 88sec., and water absorption ratio of 84 % when compared to control formulation (ODTC0) which shows 189sec., 164sec., and 48% values respectively for the above parameters. The experimental data also reveals that the results obtained from the Plantago ovata mucilage are comparable and even slightly better than those of Seed Powder and Husk Powder. In-vitro dissolution studies on the optimize formulations (ODT3, ODT6, ODT9) revealed that more than 90% drug released within 10 min.