Bergenin is reported to occur in Viburnum nervosum (Capprifoliaceae). This is the first report of its occurrence in genus Viburnum. Derivative of Bergenin viz Bergenin diethyl ether, its penta acetate and diethyl ether triacetate have been prepared. Their method of preparation and characterization by spectroscopy is reported for the first time.

INTRODUCTION 1, 2, 3, 4: Viburnum nervosum Hook (Capprifoliaceae) known in Hindi as “Shirporna- jaya” is used in the Indian system of medicine as astringent and emmenagogue. It yields as essential oil, which is used as a potential perfumery material. In Kashmir its roots are used in treatment of acute furunculosis.

Although several known triterpenes, alcohols and flavones have been isolated from this plant, we are the first to report the occurrence of Bergenin (I) from the roots of this plant 2. Compound (I) is already known to occur in genus Bergenia (Saxifragaceae) and has been found to possess use in the treatment of hypercholestraemia, kidney stones, fever, diarrhoea, pulmonary infection, as an antioxidant and anticancer agents.

This paper deals with the isolation preparation and spectroscopy of Bergenin and some of its derivatives.

Plant material: The roots of Viburnum nervosum were collected from the hilly area Of Srinagar Kashmir and was authenticated by Prof.Shantosha Saraf, Deptt of Botany, Kashmir University. A Voucher Specimen (RLK/VN/77) is preserved in Department of Pharmaceutics, Banaras Hindu University, Varanasi.

Extraction and isolation: The roots were air-dried, powdered to moderately coarse powder and defatted with the petroleum ether (60o-80oC) in a soxhlet apparatus. It was extracted thoroughly with the rectified spirit.

Mass spectra of (I) show M+ at m/z 328 with base peek at m/z 208(V), which corroborates with the correctness of tricyclic structure of Bergenin.

Bergenin penta-acetate (III) A mixture of compound I (10mg), acetic anhydride (3ml) and try ethylamine (1ml) was kept at the room temperature overnight and then poured into crushed ice till the decomposition of acetic anhydride was complete. It was then extracted with chloroform, chloroform layer was washed first with aqueous sodium bicarbonate and subsequently with distilled water. Chloroform extract was dried over anhydrous sodium sulphate and evaporated to dryness to give a residue, which crystallized from methanol as yellowish shinning needles m.p. 134-35oC. I.R (KBr) indicates absence of hydroxyl groups, peaks at cm, -1 1720(α, β unsaturated δ lactone, 1740 (broad, ester carbonyl); PMR (CDCl3 δ) signales at 2.08, 2.12, 2.14 (3H, s each) and 2.15(6H, s) for five acetoxy methyl proton, 3.98(3H,  s , Ar-OCH3); 7.52(1H , s , Isolated Ar-H ). 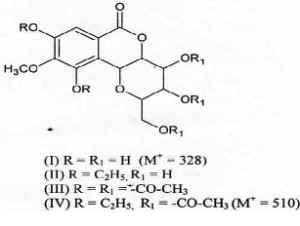 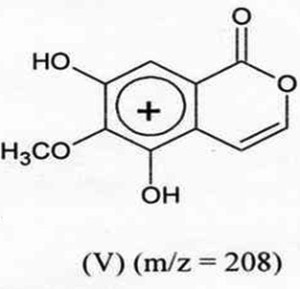 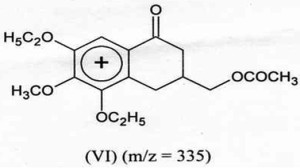 ACKNOWLEDGEMENT: Thank are due to Prof V.B. Pandey, Deptt of Medicinal Chemistry, BHU, Varanasi, India, for Mass and NMR Spectra.