Aim: Litsea glutinosa (L.) a medicinal plant is popularly used as herbal remedy for various ailments.  But  the  scientific  basis  for  its  medicinal  use especially  in pain and  inflammation  remains unknown. Therefore, the present study was designed to evaluate analgesic potential of the ethanolic extract of the bark of the plant.

Approach: The analgesic activity of standard tramadol HCl was determined for its  central pharmacological actions  using  hotplate method  in  mice. Simultaneously the ethanolic extract was also investigated for its analgesic action.

INTRODUCTION: Pain is a sensorial modality and primarily protective in nature, but often causes discomfort.  It is the most important symptom that brings the patient to physician. Analgesics relieve pain as a symptom, without affecting its cause 1. Currently  available  analgesic  drugs  such  as opiates  and NSAIDs  are  not  useful  in  all  cases  due  to their adverse effects. In this respect new compounds with improved  pain  management  capacity  and  fewer  side effects  are  being  sought  with  urgency 2. The long historical use of medicinal plants in many traditional medical practices, including experience passed from generation to generation has demonstrated the safety and efficacy of traditional medicine. However, scientific evaluation is needed to provide evidences of their safety and efficacy.

Narcotic analgesics are associated with addictive properties and numerous side effects including respiratory depression, drowsiness, decreased gastro intestinal motility, nausea and alteration in autonomic nervous system activities. The search for pharmacological agents to overcome these shortcomings has become a major goal in pain research 3.  For centuries, medicinal plants are the basis for the treatment of various diseases. Nearly 80% of people living in developing countries still depend on plant-based traditional medicine for their primary health care and almost three-fourths of the herbal drugs used worldwide are derived from medicinal plants. However, the quality control of herbal medicine remains a challenge owing to the fact that there is a high variability in the active constituents involved 4.

Plant Material: The  bark  of  Litsea  glutinosa (L), which  according  to Kirtikar  and Basu,  “is  one  of the most popular among native drugs”, is considered to be capable of relieving pain, arousing sexual power and also producing a soothing effect on the body, good for the stomach and are considered to be mildly astringent, other uses of the bark include treatment of diarrhoea  and dysentery. The methanolic  extract  of  the bark of Litsea glutinosa  (L) showed  antibacterial  activity  comparable  to  chloramphenicol,  against  16  tested microorganisms 7.  Litsea glutinosa (L) is widely available throught India. The  fresh dried  stem barks were collected  from  the  forests  of  Ananthanahalli  near  Harapanahalli,  Karnataka  in the month of June 2008 and herbarium was prepared by processing the plant for 10 days.

The specimen was further identified and authenticated in Department of Botany, by botanist Prof.  S.A.  Kappali, Basaveshwar Science College, Bagalkot, Karnataka. Voucher specimen (B.sc./Bot/07/08709) was deposited in the herbarium of the same college. The bark was subjected to coarse powdered (#: 44) to obtain uniform texture. All chemicals and reagents purchased were analytical grade. The  sieved  powder was  stored  in  airtight  and  high  density  polyethylene  containers before  extraction.  The  sieved  powder  was  subjected  to  hot  continuous  Soxhlet extraction with petroleum  ether  and  ethanol  for 24 hours  cycle  at 700C 8. Excessive solvent was removed by solvent distillation apparatus and residue was concentrated by using Lyotrap dryer.  The brownish solid masses of extract were preserved in aseptic condition before performing the experiment.

Animals: For the experiment Swiss albino mice of either sex, 3-4 weeks of age, weighing between 20-25 g, were procured from Mahaveer Enterprises, Hyderabad, India were used in the studies. Animals  were maintained  under standard environmental conditions(temperature:  (24.0±1.0°),  relative  humidity:  55-65% and 12 h  light/12 h dark  cycle)  and had  free  access  to feed  and  water  ad  libitum. The animals were acclimatized to laboratory condition for one week prior to experiments.  All  protocols  for  animal  experiment were  approved  by  the  institutional  animal  ethical committee (IAEC, Clearance/2007/1-8), HSK College of Pharmacy, Bagalkot, Karnataka.

Acute toxicity: Acute oral toxicity study was performed as per OECD-423 Guidelines. Female Swiss albino mice (20-25gm) were randomly distributed to 6 groups (n=6) the animals were fasted overnight and drug was administered orally at the dose of 100, 200, 400, 800, 1600 and 3200 mg/kg the animals were closely observed for 24 hr for a toxic symptom and 72hr for mortality rate 9.

Hot Plate Method: The animals were divided into four groups with five mice in each group. Group I animals received vehicle (normal saline), animals of group II were administered a 22.8 mg/kg (body weight i. p. route) dose of standard drug (Tramadol HCl) 10. While animals of Group III and Group IV were treated with 100 and 300 mg/ kg body weight (p. o.) of the crude extract of Litsea glutinosa (L) respectively. The animals were placed on Eddy’s hot plate kept at a temperature of 55±0.5°C. A cut off period of 15s, was observed to avoid damage to the paw.11 Reaction time was recorded when animals licked their fore or hind paws, or jumped prior to and 0, 30, 60 and 90 min after oral administration of the samples 12, 13.

Statistical Analysis: Statistical analysis for animal experiments was carried out using one-way ANOVA followed by Dunnet’s multiple comparisons. The results obtained were compared with the vehicle control group. p- Value<0.05, 0.001 were considered to be statistically significant. 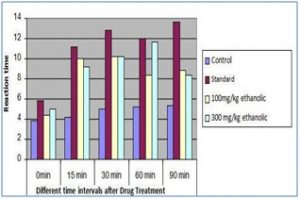 DISCUSSION: The analgesic property of Litsea glutinosa (L) Can also probably due to the blockade of the effects or the synthesis and /or release of PGs and /or other endogenous substances that excite pain nerve endings 14. The  hot plate  method  test  is considered  to  be selective  to  examine  compounds acting  through  opoid  receptor;  the  extract  increased mean basal  latency which  indicates  that  it may  act via centrally  mediated  analgesic  mechanism.  Narcotic analgesics  inhibit  both  peripheral  and  central mechanism  of  pain,  while  non  steroidal  anti-inflammatory  drugs  inhibit  only  peripheral  pain 15,16. Based  on  the  results  of  the  present  study,  we conclude  that  the  plant  extract  possesses  strong analgesic potential.

However, further studies  are  necessary  to  examine  underlying mechanisms of analgesic and antioxidant effects and to isolate  the  active compound  (s)  responsible  for  these pharmacological activities.

CONCLUSION: Further Studies required identifying the active phytochemical constituents and evaluating their effectiveness in vivo so that they can be synthesized and commercial production begins in earnest.

ACKNOWLEDGEMENTS: We are grateful to our Principal Dr. V.H.K. Verma, staff members, Director and our honorable chairman Sri. K. V. Vishnu Raju garu of Vishnu Institute of Pharmaceutical Education and Research (VIPER), for providing us necessary facilities to carry out the research project. Authors are also grateful to Principle and staff members of HSK College of Pharmacy.