ABSTRACT: Back ground: Use of proper analgesics as adjuvant to balanced anaesthesia can calm the patient, reduce stress and decrease the need of higher doses of inhalation agents. Some examples of analgesics are opioids, NSAIDS, NDMA receptor antagonists (ketamine). Nalbuphine is a synthetic opioid agonist-antagonist analgesic of the phenantherene series. We conducted this study with the aim to observe the effect of nalbuphine as an adjuvant to balanced anaesthesia on intra operative hemodynamics and analgesic requirement in perioperative period. Material and method: prospective, observational study was carried out in 70 adult patient of ASA grade II -III, aged 18 to 60 years, undergoing otolaryngorhinological surgeries. After informed consent patients were given routine premedication given with inj. Nalbuphine 0.1 mg/kg i.v. General anaesthesia was given and subsequent 1/5th doses of the drug administered at every 30 minutes intra operatively. Intra operative hemodynamic monitoring was done. In post-operative period inj. Diclofenac 1.5 mg/kg i.m as a rescue analgesic was given when VAS score was ≥ 4. Observation results: Maximum rise in pulse rate and mean blood pressure were 15.48% and 8.44% respectively immediately after intubation. Intra-operatively patients remained hemodynamically stable. Average dose of nalbuphine used during intra operative period was 0.12 ± 0.01 mg. Post operative duration of analgesia was 446 min (7.16 h).10 patients had nausea and 7 patients had vomiting post operatively. Conclusion: Nalbuphine provided better analgesia and greater haemodynamic stability with fewer side effects as a component of balanced anaesthesia.

INTRODUCTION: The “Balanced anaesthesia” term was introduced by Lundy in 1926 1. Lundy  suggested that a  balance of agent and technique, that means premedication, regional  anaesthesia, general anaesthesia with  one or more agent should be used to produce the  different component of anaesthesia i.e. analgesia,  amnesia, muscle relaxation, and abolition of autonomic responses with maintenance of homeostasis.

Intravenous analgesics were used during balanced anaesthesia for first time in America by Neffett at in 1947 1 and in Great Britain by Mushin & Rendel Baker in 1949 2. Use of agonist antagonist analgesics for both intraoperative and postoperative analgesia is an acceptable alternative 3, 4.

Balanced anesthesia allows to minimize patient risk and maximize patient comfort and safety.  The objectives of balanced anesthesia are to calm the patient, minimize pain, and reduce the potential for adverse effects associated with analgesic and anesthetic agents. The surgical stress response peaks during the Postoperative period and has major effects on almost all body systems. A pain-free and stressfreepostoperative period definitely helps in early mobilization and recovery, thereby reducing morbidity and mortality. The best way to control pain is to stop it before it starts.  Proper analgesics also aid in calming the patient and decreasing the need for higher doses of inhalant anesthetics.  Some examples of analgesics are opioids (such as morphine, buprenorphine, butorphenol, nalbuphineand fentanyl); NSAIDS (such as carprofen, meloxicam, ketoprofen); local anesthetics (such as lidocaine, and bupivacaine); and NDMA receptor antagonists (ketamine). Nalbuphine Hydrochloride is a synthetic opioid analgesic. Nalbuphine is an agonist - antagonist opioid analgesic with cardiovascular stability 5, 6 and lesser potential for respiratory depression 7, 8.

MATERIAL AND METHODS: After approval from the institutional ethical committee, 70 American Society of Anaesthesiology (ASA) II and III patients, aged 18-60 years, scheduled for ear and nose surgeries were included. Patients with ASA status 4 or 5, history of allergy to NSAIDs or narcotics, alcohol or any other drug abuse, psychological disorders, hematological disorders, chronic obstructive pulmonary disease, bronchial asthma were excluded. After thorough pre-anaesthetic evaluation including airway evaluation, patients were explained about study and written informed consent was taken and all the patients were explained about the Visual Analog Score (VAS).

In the preoperative room 18G intravenous cannula was inserted.  In Operation Theater all monitors including electrocardiogram, pulse oximeter, noninvasive blood pressure, capnography were applied to the patients. Baseline parameters such as heart rate (HR); systolic (SBP), diastolic (DBP) and mean (MBP) blood pressure; SpO2; ECG were noted. All the patients were premedicated with Inj. Glycopyrrolate 4 µg/kg, Inj. Ondensetron 0.08 mg/kg, Inj. Ranitidine 1 mg/kg, and Inj. Nalbuphine 0.1 mg/kg intraveno3us (iv). General anaesthesia was given after preoxygenating the patients with 100% oxygen for 3 minutes. Induction was done with Inj. Thiopentone sodium 5-7 mg/kg iv and suxamethonium 1.5 mg/kg iv was given to facilitate endotracheal intubation.

After endotracheal intubation patients were put on IPPV (Intermittent Positive Pressure Ventilation) mode of ventilation. Maintenance of anaesthesia was achieved using mixture of O2 (50%), N2O (50%), Sevoflurane, Inj. Vecuronium used as a muscle relaxants. Intravenous fluid Ringer lactate and Dextrose saline were given according to requirement of patients. During surgery, Inj. Nalbuphine was given in 1/5th dose of the induction dose at every half hour, and it was stopped  30 minutes before completion of surgery. Total dose received by each patient was noted. After completion of surgery residual neuromuscular blockade was reversed with Inj. Neostigmine 50µg/kg iv and inj. glycopyrrolate 8µg/kg iv and extubation was done. All parameters were recorded at 5 min, 10 min, 20, min, 30 min, and thereafter at every 15 min till the extubation. Hemodynamic stability was considered significant if blood pressure change was greater than 20 % of baseline value.

In post operative period sedation was assessed by using Ramsay sedation score and pain was assessed by using visual analogue score (VAS) and sedation score and VAS score were noted at different time interval. Rescue analgesic in the form of Inj. Diclofenac 1.5 mg/kg intra venously was given wen VAS≥ 4. PR, MBP, SpO2 were observes at every 15 minutes interval up to 2 hr and at every 1 hour interval up to 10 hrs. Any post operative side effects in the form of nausea, vomiting, respiratory depression, dizziness, headache, and change in vital parameters were also noted.

Observation and results: In the present study 70 patients were randomly selected. Demographic profile and duration of surgery were as shown in Table 1. Average duration of analgesia was 429.65 minutes, approximately 7.16 hours Duration Table 2. Only 1 patient had pain immediately after extubation.

After 5 minutes of intubation blood pressure decreased and came back to base line values and remained stable thereafter Fig.2.

TABLE 3: POSTOPERATIVE COMPLICATIONS AND SIDE EFFECTS 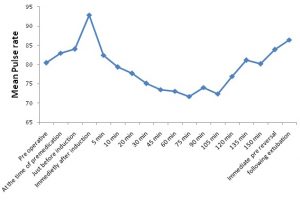 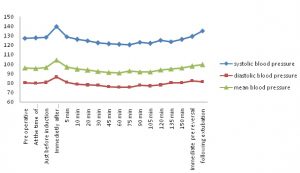 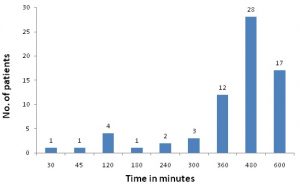 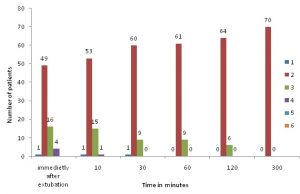 DISCUSSION: Balanced anesthesia allows us to minimize patient risk and maximize patient comfort and safety.  The objectives of the balanced anesthesia are to calm the patient, minimize pain, and reduce the potential for adverse effects associated with analgesic and anesthetic agents. Analgesics are used during balanced anaesthesia for greater cardiovascular stability, reduction in dose requirement of muscle relaxant and volatile agent, rapid recovery of consciousness and minimal side effects during and after operation. Recovery of both consciousness and spontaneous ventilation is rapid. It reduces the operation theatre pollution due to volatile agent and possible adverse reaction to liquid agent.

In present study we used the opioid analgesic nalbuphine with volatile anaesthetic agent and muscle relaxant as a part of balanced anaesthesia. The analgesic efficacy and hemodynamic stability was considered significant if pulse rate and blood pressure changes were lesser than 20 % of baseline value. In our study rise in pulse rate and mean blood pressure were 15.48% and9.71% respectively, which were less than 20%. So it was statistically significant. Dabhi et al 9, Muhammad et al 10 and Chawda et 11 al assessed efficacy of nalbuphine to prevent hemodynamic response to intubation.

They found that nalbhuphine prevent rise in pulse rate and blood pressure associated with laryngoscopy, which is comparable to our result. For measurement and assessment of pain we used VAS immediately following extubation when patient started following verbal command spontaneously. We explained VAS method pre operatively to each patient. We concluded that immediately following extubation only 1 out of 70 patients required recue analgesia. It indicates good intra operative analgesia was provided by Nalbuphine. Bangera et 12 alcocluded that Intravenous nalbuphine provided longer duration of analgesia compared with morphine, which is comparable with our result.

Anaesthesia for head and neck surgeries may be complicated by intraoperative arrhythmias and postoperative vomiting. These may be mediated via a variety of vagal reflexes. And in those given any opioid for analgesia also augments postoperative emesis.  A rapid return of reflexes and a quiet, non-emetic, pain-free recovery from surgery are desirable following ENT and eye surgery. Anti-emetic should be given prophylactically with the induction of anaesthesia when postoperative vomiting is especially undesirable. All our patients received ondansetron and ranitidine during pre-medication. Despite the premedication with these anti emetic drugs, 10 patients (14.28%) had nausea and 7 patients (10%) had vomiting. These subsided after giving inj. Ondansetron as a repeat dose. Only one patient had episode of headache out of all 70 patients.

In 2005, Van den Berg AA et al 16 demonstrated the effects of equipotent doses of tramadol and nalbuphine (3.0 and 0.3 mg/kg, respectively) given as analgesic with induction of anaesthesia on emesis, post-opertive nausea and vomiting (PONV) and headache during recovery from anaesthesia and until 24 h after ENT surgery, using saline (0.2 ml/kg) and an equipotent dose of pethidine (1.5 mg/kg) as controls. PONV was least frequent in the saline and pethidine groups (32% and 37%, respectively) and was most frequent in the tramadol and nalbuphine groups (49% and 52%, respectively). So they concluded that tramadol, nalbuphine and pethidine have similar emetic effect in the doses and manner used. In our study we used dose of nalbuphine of average 0.13-0.15 mg/kg, so which probably explains lesser incidence of PONV than this study.

CONCLUSION: We concluded that Nalbuphine provides a good analgesic option in balanced anaesthesia technique as it provides good intra operative and postoperative analgesia and good haemodynamic stability with less side effects.