INTRODUCTION: Major depressive disorder (MDD) is characterized by depressed mood most of the time for at least 2 weeks and/or loss of interest or pleasure in most activities 1. In addition, depression is characterized by disturbances in sleep and appetite as well as deficits in cognition and energy. Thoughts of guilt, worthlessness, and suicide are common. An estimated 5.8% of men and 9.5% of women experience depressive episodes in their lifetime. 60% of death toll due to suicides is with depressive illness.1

Approximately two-thirds of the depressed patients respond to the currently available treatments (Tricyclic Antidepressants, Selective Serotonin Reuptake Inhibitors, etc), but the magnitude of improvement is still disappointing. More over these drugs have unusual side effects. So the search for more effective drugs with fewer side effects is on.

Tramadol is a synthetic centrally acting opioid analgesic used mainly for the treatment of moderate-to-severe pain. It produces analgesia because of weak μ opioid receptor agonist and by inhibiting uptake of norepinephrine and serotonin 2. Tramadol causes activation of both systems mainly involved in inhibition of pain, i.e., the opioid and the descending monoaminergic pain-modulating pathways. There is a large body of evidence to suggest that the analgesic action of Tramadol is mainly related to central monoaminergic mechanism rather than opioid receptor pathway 3. It has also been observed that Tramadol-induced analgesia is blocked by α2 adrenergic receptor antagonist Yohimbine. 4

Studies have already shown that Tramadol effectively inhibits reuptake of monoamines. It has also been established that Tramadol inhibits reuptake of serotonin in the raphae nucleus 5. Tricyclic antidepressants mainly act by inhibiting Norepinephrine or Serotonin reuptake; Tramadol by virtue of its property of blocking monoaminergic reuptake may act as an antidepressant. Also, Tramadol bears a close structural similarity to antidepressant Venlafaxine and thus shares a number of its molecular and pharmacological features 6.

Epidemiological studies confirm frequent appearance of pain symptoms in depressed patients and a marked prevalence of depression in pain conditions. These observations seem to point at a close intertwining between mood regulation and pain perception. In the pathogenesis of both depression and pain symptoms, an important role has been attributed to disturbances of serotonergic and noradrenergic neurotransmission as well as to neuropeptides such as opioids and substance P. Hence this study was undertaken with the objective of studying the antidepressant like activity of Tramadol in animal models of depression and its comparison to Selective Serotonin Reuptake Inhibitor Fluoxetine.

MATERIALS AND METHODS: In the present study, Tramadol was studied in mice to assess its antidepressant activity. It was conducted in Department of Pharmacology, Kamineni Institute of Medical Sciences, Narketpally from October 2010 to September 2012. The study was placebo controlled, Randomized, Laboratory- based comparative study on animals with prior permission of Institutional Animal Ethics Committee (IAEC). Swiss albino mice (25-30 grams) of either sex, were used. Animals were procured from Central Animal House of National Institute of Nutrition, Hyderabad and kept in air conditioned environment in the Central Animal House, KIMS, Narketpally. After procurement, a study gap of one week was given for acclimatization. The animals were housed under standard laboratory conditions, maintained on a 12:12h light dark cycle and had free access to food and water. All the experiments were carried out between 10:00 and 15:00 hr.

All the drugs were given to mice, which were randomized into goups as shown in Fig. 1.

This animal model is based on the principle that forcing mice to swim in restricted space from which they cannot escape leads to a characteristic behavior of immobility. This behavior reflects a state of despair, which can be reduced by several agents that are therapeutically effective in human depression. Test drugs were administered intraperitonially for 7 days. On day 7, drugs were administered to mice 40 minutes prior to testing.

Mice were individually forced to swim inside vertical plexiglass cylinder (height, 25 cm; diameter, 10 cm) containing water column of 15 cm height as shown in Fig. 1. After an initial 2 minute period of vigorous activity, usually each animal assumes a typical immobile posture. A mouse was considered immobile when it remained floating in the water without struggling, making only minimum movements of its limbs necessary to keep its head above water. The total duration of immobility was recorded during the last 4 minutes (240 seconds) of the total 6 minutes of the duration of the test. Duration of immobility period of Tramadol group was compared with that of Control and Fluoxetine group.

TABLE 1: IT SHOWS GROUPING OF MICE AND DOSES OF THE DRUGS ADMINISTERED TO MICE EACH GROUP 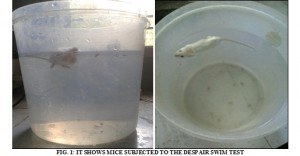 FIG. 1: IT SHOWS MICE SUBJECTED TO THE DESPAIR SWIM TEST

RESULTS: Pre- treatment of the mice with drugs (Tramadol, Fluoxetine or Normal saline) was given 40 minutes before the test on day 7. Despair Swim Test performed and the immobility time is noted. Lesser the immobility time, greater is its antidepressant activity. The Mean immobility times were then analyzed by performing one way ANOVA and post hoc least difference method was done using SPSS software.

TABLE 2: IT SHOWS THE IMMOBILITY TIME OF MICE (MEAN ± SE) IN EACH GROUP IN DESPAIR SWIM TEST 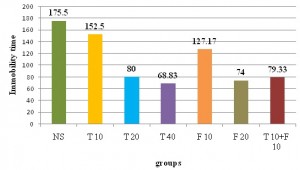 The combination of low doses of Tramadol 10mg/kg + Fluoxetine 10mg/kg significantly reduced the immobility time in seconds in comparison to Tramadol 10mg/kg alone or Fluoxetine 10mg/kg alone suggesting Tramadol can potentiate antidepressant action of Fluoxetine. Further the immobility time in seconds after Tramadol 20mg/kg is not significantly different than Fluoxetine 20mg/kg suggesting antidepressant activity of Tramadol is comparable to Flouxetine in despair swim test.

Further the immobility time in seconds after Tramadol 20mg/kg is not significantly different than Fluoxetine 20mg/kg suggesting antidepressant activity of Tramadol is comparable to Flouxetine in despair swim test.

CONCLUSION: This study suggests that Tramadol has significant antidepressant activity, which is further potentiated when combined with Flouxetine in low doses.

ACKNOWLEDGEMENT: This work was done with the co-operation of my colleagues and valuable advice of my Guide Dr Santhamma B and suggestions given by our HOD Dr. Venkat rao Y. I profusely thank the management of Kamineni Institute of Medical Sciences for funding for the procurement of the required drugs and mice.