ABSTRACT: Buckwheat has been a major food source in Asian countries such as China, Japan, and Bhutan etc. for its nutritional values. It has been a major functional food supplement for nutraceutical industry. It is the first time exploration of buckwheat seed powder as tablet binder. The aim the study was to expand the area off tablet binders from gums and extracted polysaccharides to whole seed powders so as to reduce processing cost involved with other synthetic binders and involvement of whole seed benefits to single dosage form. In the present study buckwheat seed powder was used in the concentrations of 1%, 2%, 4%, 6% and it was compared with binding capacity of 2.5% acacia in tablet formulation as direct compressible agent. Valsartan was used as a model drug. It was found out that 2% w/w concentration of Buckwheat seed powder performed well and all the parameters were in good range. It was concluded that buckwheat seed powder can be a good direct compressible agent for tablet formulation.

INTRODUCTION: Binders are the agents used to impart mechanical strength to the tablets they help to insure intactness of the tablets after compression 1. The polymers obtained from the natural sources are more efficacious and safe. They are easily available in natural regions around the world therefore they are preferred over synthetic polymers 2. Natural polymers like gums and mucilages such as Tragacanth, karaya, acacia, Tamarind seed polysaccharide etc. are also used as binding agents and provide advantages such as inertness, bio-compatibility, low cost and easy availability 3.

Direct compression involves mixing of Drug with excipients and direct application of compaction to form tablets, direct compression has several advantages such as stability of formulation, cost effectiveness, faster dissolution and minimum microbial growth due to dry processing of ingredients 4. Buckwheat is a member of the Polygonaceae family, which includes common buckwheat (Fagopyrum esculentum) and tartary buckwheat (Fagopyrum tataricum).

Buckwheat originated from China belongs to dicotyledonous Polygonaceae foliage. It is also planted in the other areas of Asia, Europe and some mountainous areas of America. There are more than 10 species distributed in all over the world 5. To the best of our knowledge, modern pharmacological studies revealed that the Fagopyrum species possessed versatile bio-activities, including anti-tumour, anti-oxidant, anti-inflammatory, anti-aging, hepato-protective, hypo-glycaemic, anti-allergic, anti-fatigue activities, etc. Several types of bioactive phenolics including flavonoids, condensed tannins, and phenyl-propanoids and phenol derivatives were isolated from those buckwheat species. Flavonoids in Fagopyrum buckwheats exhibited remarkable antioxidant and cardio-cerebral vascular protective effects hence they were considered important dietary supplements 6. It has been reported that buckwheat seed powder solution shows non Newtonian flow and it can be used as biodegradable polymer in various dosage forms 7.

The present study has been done to evaluate use of whole seed powder of Buckwheat as natural tablet binder during direct compression of tablets and its comparison with acacia which is already an established tablet binder.

MATERIALS: Valsartan was obtained as gift sample from Emcure Pvt. Ltd., Pune. Buckwheat seed were procured from NutriBuck, Pune. All the other chemicals used were of analytical grade and obtained from New Neeta chemicals, Pune.

METHODS: Note: All the values obtained were taken thrice and their mean ± SD is given in data.

Moisture Content Determination using Loss on Drying Method: 1.5 g of the powder was weighed and kept into porcelain dish and dried at 105 °C. Weighing was done at every 15 minute interval until weight of dried sample does not differ by more than 0.5 mg 8.

Compatibility Study: The seed powder and the drug were mixed in 1:1 mixture and subjected to FTIR analysis using potassium bromide pellet method. The scanning range was within 4000 cm-1 and 400 cm-1. 9

Formula for Tablets: While preparing the batches tablets Table 1 using acacia as binder in 2.5% w/w concentration and batch F1 to F4 represent tablets containing buckwheat seed powder from 1% w/w to 6% w/w respectively. In the Table 1, 100% represents 200 mg tablet for each batch.

Evaluation of Precompression parameters of Powder: The flow properties of the tablet mixture were assessed using various parameters such as Bulk and tap density, Housner ratio, Carr’s index and angle of repose 10, 11.

Compression of Tablets: The tablets were compressed using Rimek mini-press, a 12 stations tablet punching machine with 8mm concave punch. The target weight of tablet was 200 mg in which 40mg is the weight of Valsartan.

In vitro Release Studies: In vitro release studies were done by using dissolution test apparatus (Veego, India). 900 ml of phosphate buffer was used as medium and test was run for 45 minutes. The sample volume taken was 5 ml and it was scanned using UV-spectrophotometer. The tablet should release not less than 70% at the end of test14.

Release Kinetics Study: In order to examine the release mechanism of drug sample from the prepared tablets of the optimized formulation, the results of the dissolution study was examined in accordance to the kinetic models such as zero-order, first order, Higuchi equation, Korsemeyer–Pappas equation and Hixson–Crowell equation. Graphs were made using Microsoft Office excel 2010.

RESULTS AND DISCUSSION: The seeds were crushed and fine powder was obtained using sieve #85. The powder showed charring at 285 °C ±5 °C, indicating that there are carbohydrates present in the powder sample 18. pH of the powder sample was found to be 6.5 ± 0.22 indicating that the seed powder is weakly acidic in nature. Viscosity of the 2% w/v seed powder was found to be 4.40 ± 0.12 cp at 100 RPM. The powder contained 4.22 ± 2.33% of moisture, when calculated using loss on drying method.

The Precompression evaluations of batches have been given in table 3, where it is evident that all batches show good flow properties. The Carr’s index was found to be from 20.27 to 24.10 which is within the limit of fairly passable criteria, the flow can be increased by using lubricants; The Hausner ratio was found to be from 1.10 to 1.30, which indicates that the formulation will need glidant to improve flow; the angle of repose was found to be from 27.82° to 33.61°, which indicates passable flow. When the percentage compressibility is below 15% the powders have excellent flow properties while cohesive powders have percentage compressibility above 25% indicating poor flow properties Powders with Hausner ratio below 1.25 have good flow properties and powders with angle of repose below 40º but preferably below 30º exhibit good flow, while powders with 50º would flow with difficulty 19. 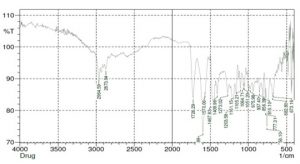 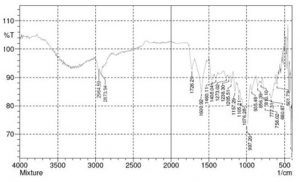 The tablet parameters studied were compiled in Table 4 and Table 5. From the Table 4 it was found out that the batch containing 1% w/w seed powder failed friability test, all other batches passed the tests. The hardness as well as Disintegration time increased with the increase in powder concentration. This indicated good binding of powders. The in vitro dissolution study data given in Table 5 shows that batches F0 - F3 passed the test but the batch F4 failed the test due to less than 70% release in 45 minutes as stated by Indian Pharmacopoeia.

Fig. 3 represents the graph of percent drug release of the batches. The drug release decreased with increase in binder concentration; this may be due to high amount of binding agent retarded the drug release. Among all these batched Batch F2 was selected as batch of choice due to better release and it passed all the parameters, although batch F1 has the highest dissolution may be due to  the fact that is was having highest friability and it was dissolved immediately but it failed friability test hence it cannot be considered as batch of choice. 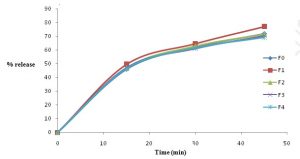 Table 5, from the data obtained it is evident that the batched F0 and F2 exhibit similar dissolution profiles. Since the values of f1 and f2 factor lies within the stated limits. From the above Table 7, values obtained by t test using two tailed test gives p value 0.9904 which is greater than 0.05  i.e. p > 0.05, hence there is no significant difference between the dissolution profiles of the two formulations.

From the Table 8, Higuchi model was found to be best fit model for both the formulations. The release exponent n was found to be between 0.45-0.89 which indicated anomalous non - fickian diffusion. Which literally mean that the rates of solvent penetration and drug release are in the same rang. This deviation is due to increased drug diffusivity from the matrix by the solvent-induced relaxation of the polymers.