ABSTRACT: To evaluate the effects of different processing parameters on drug-loaded microspheres, the solvent evaporation technique was chosen as the formulation method. Indomethacin-loaded Polylactic acid microspheres were prepared by varying drug masses, then by changing the stirring speed. They were analyzed for their drug content, physical morphology, size, polymer-drug physicochemical compatibility, and in-vitro drug release. Microspheres revealed a spherical profile along with a porous structure. The effect of changing the drug mass was noted on drug encapsulation and loading efficiencies. Indomethacin had better encapsulation when introduced in small amounts. On the other hand, the effect of changing the stirring speed was remarkable on the size of obtained microspheres and drug release profile. The particle size decreased as the speed of mixing increased. Also, a faster drug release was observed for larger microspheres.

INTRODUCTION: Recent studies carried out in the fields of medicine and pharmacy, in particular in drug delivery and biotechnology, have grasped great attention and helped in overcoming several disadvantages of drug administration and therapy 1, 2, 3. The first research about using controlled delivery for pharmaceutical agents was done early in the last century by Bungen Burg de Jong and Kan, who dealt with the preparation of microspheres based on gelatin 4. Micro-encapsulation by the solvent evaporation technique is the most widely applied for both hydrophilic and hydrophobic drugs compared to other methods such as spray drying, polymerization, or coacervation 5, 6.

It has many advantages over the other techniques since it is known for its simplicity, its low cost and short preparation time, and the good reproducibility and consistency of obtained results 7, 8, 9. Polylactic acid (PLA) belongs to the family of polyesters. It has several characteristics that make it very important in biomedicine, such as good mechanical properties, non-toxicity, biodegradability, and biocompatibility 10. PLA can be used into rods, bone screws, sutures, tissue engineering scaffolds, and microspheres for the delivery of a variety of drugs as anti-fungal, anti-inflammatory, or steroids 11-14.

Indomethacin (INDO) is a non-steroidal anti-inflammatory drug (NSAID) used to reduce fever, pain, headaches, and inflammations related to osteoarthritis, rheumatoid arthritis, etc. 15, 16 INDO is poorly soluble in water and highly permeable; thus it shows a low absorption and bioavailability in the fluids of the GI tract. This could lead to several side effects because of the prolonged contact with mucosa 17.

One way to overcome these weaknesses is the microencapsulation of INDO into polymeric targeting systems. Also, changing some process variables such as the polymer, the surfactant, or speed of preparation could increase the therapeutic efficiency and controlled release of the drug from the polymeric microspheres 18.

In this study, PLA microspheres loaded with INDO are formulated as a new drug delivery system using the o/w solvent evaporation technique. Effects of changing the drug mass and stirring speed on the microspheres are evaluated.

Chemicals: the polymer Poly(DL-lactide) (average MW 75,000-120,000), the drug Indomethacin, the surfactant Tween 80, were bought from Sigma-Aldrich, Germany. The solvents Dichloromethane (DCM) and methanol (MeOH) were of special reagents grade.

Synthesis of INDO-PLA Microspheres: the solvent evaporation method was used to formulate INDO-loaded PLA microspheres. The organic phase consisting of the drug and the polymer dissolved in 14/6 ml DCM/MeOH was added into the aqueous phase containing the surfactant Tween 80. The o/w emulsion was stirred mechanically (MSP-1 Digital Overhead Stirrer, Jeiotech, Korea) for 6 hrs to let the solvent evaporate and allow the formation of microspheres. These were recuperated by filtration, washed with distilled water and MeOH then dried.

As a first step, different drug formulations referenced I1 to I5 were prepared by varying the drug mass each time, while maintaining the quantities of polymer and surfactant fixed at 500 mg and 2.6 g (1% w/v solution) respectively. As a second part, and according to the drug content values obtained, new drug formulations referenced F1 to F4 were prepared this time by fixing quantities of PLA, INDO and surfactant (18% w/v solution equivalent to 45 g), and changing the stirring speed from 300 rpm to 1400 rpm to study its effects on INDO microencapsulation.

Estimation of Drug Content: percentages of Drug Encapsulation (% DE) and Drug Loading (% DL) were calculated using UV/vis spectrophotometry (Microplate Spectrophotometer, Epoch Biotek, USA). 7 mg microspheres were dissolved in 7/3 ml DCM/MeOH and evaluated for their INDO content at 322 nm. % DE and % DL were calculated according to equations 1 and 2.

Measurement of Particle Size: A laser diffraction granulometer (LA-950A2 instrument, Horiba Ltd., France) was used to measure the particle size of microspheres. Microspheres were suspended in water with few drops of Tween 80 added to allow good dispersion. The obtained average diameter of particles was in micrometers.

Examination of Microspheres Morphology: The morphology of microspheres was examined with a Scanning Electron Microscope (SEM) (LYRA3 XMU, TESCAN, Czech Republic). Briefly, microspheres were fixed to a conductive carbon tape and coated with a platinum layer having a 10 nm thickness, using a sputter coater.

Study of in-vitro Drug Release: Accurately weighed microspheres were suspended in 25 ml PBS and maintained at 37 °C. The drug release experiments were conducted in PBS (0.2 M, pH 7.4). At different times, 5 ml of the release medium was withdrawn and tested for its drug content at 322 nm.

RESULTS AND DISCUSSION: The o/w emulsion solvent evaporation technique was applied for the preparation of a new drug delivery model for INDO. This method has been commonly known to yield uniform and well-shaped microspheres. Several preparative variables were taken into consideration to obtain satisfactory results, such as the drug mass and the stirring speed.

Effect on Drug Content: The first part of the experiment was based on synthesizing different drug formulations by varying drug masses. This affected INDO encapsulation into PLA micro-spheres. Table 1 showed the average particle size, % DE, and % DL of the prepared microspheres. According to results, the highest % DE and % DL were obtained for the formulation containing 1 mg drug. INDO showed better encapsulation when introduced at low rather than at high quantities.

Several factors could explain these observations. INDO is hydrophobic in character and has good solubility in MeOH (17.9 g/l). As more of the drug was added in DCM/MeOH mixture during microspheres preparation, it was solubilized by the co-solvent and escaping in solution instead of being encapsulated within the polymeric matrix. This could explain the decrease in % DE with the increase in the mass of drug introduced.

Effect on Particle Size: For the second part of the experimental procedure, formulation I2 having the highest drug content was chosen as reference. Accordingly, the effect of the stirring speed between 300 and 1400 rpm was studied Table 2.

TABLE 2: EFFECT OF STIRRING SPEED ON PARTICLE SIZE OF MICROSPHERES

Results showed that as the stirring speed increased, the particle size of microspheres notably decreased from 495 to 101 µm Fig. 1. 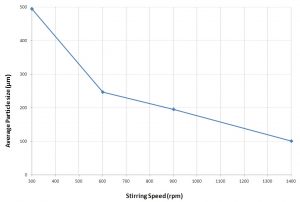 FIG. 1: VARIATION OF PARTICLE SIZE OF MICROSPHERES WITH THE STIRRING SPEED

At higher stirring rates, large sheer energy is supplied to the solution, leading to better separation of the organic phase into droplets; thus small size microspheres are formed 10.

A highly viscous solution is difficult to disperse at a lower stirring speed; this is why large particles form in this case 19.

Effect on Morphology and Drug-Polymer Compatibility: The application of the solvent evaporation is widely known to yield homogenous and uniform particles. This was confirmed by the spherical and porous structure of microspheres after examination by SEM Fig. 2.

There was no main effect on the general shape of microspheres while changing the preparation speed. 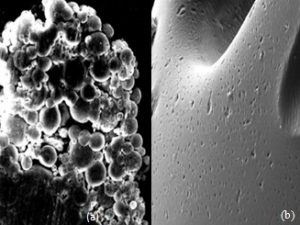 Furthermore, it is important to study the interaction of the drug and polymer by FT-IR to check for any possible changes in their chemical state after the microencapsulation procedure. Fig. 3 showed the corresponding spectra obtained of INDO, PLA, and INDO-loaded microspheres.

The FT-IR spectrum obtained for pure INDO was characterized by a significant broadband in the 3300-3500 cm-1 region assigned to –OH alcohol group of the drug, which was absent in the spectrum of PLA. Bands observed around 2900-3000 cm-1 corresponded to aliphatic –CH and –CH3 of the polymer. Bands at 1744 cm-1 (-C=O ketone) and 1183 cm-1 (-CO ester) were also assigned to the polymer.

The FT-IR spectrum of INDO-loaded PLA microspheres showed approximately the same peaks as PLA in addition to the large band assigned to the –OH group of the drug. Consequently, the results indicated the absence of any interaction between the drug and the polymer and confirm the stability of the encapsulated drug. 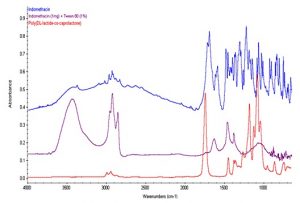 Effect on Drug Release: Drug release occurred by diffusion of the drug particles from the polymeric matrix through the pores that formed during microencapsulation 20, 21. INDO-loaded microspheres formulated with different drug masses showed a very fast drug release profile, and all required 1 to 2 h to go to completion. This could be due to the low values of % DL obtained for all formulations Table 1. Effect of changing the stirring speed was noted on the release profile of INDO formulations. As the particle size increased, with decreasing stirring speed, the faster release was observed due to the increase in drug tendency to escape Fig. 4. 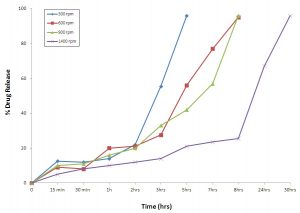 Formulation F1 was characterized with the highest burst release after 2 h, and faster release, which required 5 h for completion. In opposite to formulation F4, having the smallest particle sizes; it showed the slowest and a more extended release instead, with 30 hours for completion.

Drug release by diffusion mechanism is kinetically related to the particle size. There is a decrease in surface area to volume ratio of the encapsulated drug as microspheres increase in size 22. Thus, modifications in drug distribution within microspheres take place according to their sizes. The drug is homogenously dispersed inside small particles, whereas it accumulated in the center of large microspheres; thus, release becomes faster with the increase in particle size 23.

CONCLUSION: The previous study showed efficient in evaluating the effects of preparative parameters on PLA microspheres loaded with Indomethacin. The solvent evaporation method yielded homogeneous spherical and porous. Studied parameters included changing drug amount in prepared formulations, which influenced drug content percentages; and changing the stirring speed of the emulsion, which showed important in controlling the size of obtained microspheres and drug release.

The particle size decreased from 500 to 100 µm as the speed increased from 300 to 1400 rpm. This had, in turn, affected the drug release time, with a faster release observed for larger spheres. Such studies could be enriched by changing other variables, such as the polymer and surfactants amounts and types, the inclusion of other drugs, etc. which could lead to more important results in the field of pharmacy and medicine.

ACKNOWLEDGEMENT: The authors are grateful to the Chemistry Department at the University of Balamand who contributed to funding the project, which allowed buying the necessary chemicals needed to perform the laboratory work.