ABSTRACT: Background - Drugs affecting gastrointestinal motility find place in the treatment of gastrointestinal motility disorders. Objective: To evaluate the effect of erythromycin base on the isolated tissue of rabbit jejunum, guinea pig ileum & rat colon in vitro and also to see whether it alters the contractile responses induced by acetylcholine. Materials and Methods: a) Rabbit jejunum experiment: After recording the baseline spontaneous rhythmic contractions, erythromycin was added to the organ bath and the responses were taken every 3 min for 30 min. The effect on frequency & the amplitude of spontaneous contractions were noted. (Erythromycin doses used - 1, 2, 10 & 20 µM; in six rabbits). b) Guinea pig ileum & rat colon experiment: Initially responses were recorded with acetylcholine (1-100µg). After giving wash, erythromycin was added to the organ bath and response was recorded for 30 seconds; then after a contact period of 3 min with erythromycin, responses to selected dose of acetylcholine were recorded again. (Erythromycin doses used - 100, 300 500 & 1000 µM; in six guinea pigs & rats each) Results: In isolated rabbit jejunum, erythromycin (1-20 mM) produced increase in basal tone and higher concentrations (10-20 mM) reduced both rate & height of spontaneous contractions. In isolated guinea pig ileum & rat colon, erythromycin showed no effect on basal tone. Erythromycin (100-300 mM) reduced the magnitude of response to acetylcholine induced contractions in guinea pig ileum, but increased the magnitude of acetylcholine induced contractions in rat colon in dose dependent manner. Conclusion: Erythromycin has different effects on different parts of the gastrointestinal tract in different species of animals.

Motor function of the gastrointestinal tract is controlled by the cholinergic system (excitatory) and sympathetic system (inhibitory) and local hormones like cholecystokinin and motilin. Presence of food in the stomach, psychogenic stimuli and neurotransmitters like serotonin and dopamine can initiate and modify gastrointestinal motility.1, 2 Drugs affecting gastrointestinal motility find place in the treatment of gastrointestinal motility disorders, including diarrhoea, vomiting and constipation. Erythromycin, a macrolide antimicrobial, was discovered in 1952 by McGuire and co-workers. It has been in clinical use for last 6 decades against gram positive bacteria, gram negative cocci and mycoplasma. 3 The prokinetic effect of erythromycin has been reported and confirmed in human volunteers in the fasting and fed state.4-8 Acute and chronic treatment with erythromycin improves gastric emptying in idiopathic and diabetic gastroparesis 9, 10 as well as post vagotomy gastroparesis.11 It increases the tone of lower oesophageal sphincter and relieves dyspeptic symptoms in patients with gastrooesophageal reflux disease 12, 13 and also stimulates gall bladder emptying.14

Erythromycin has shown variable responses in animal studies. In dogs, it induces a migrating contractions originating in the stomach.15 It also causes contractile response in isolated rabbit intestines.16 On the other hand, it was shown to inhibit prostaglandin F-2 α induced uterine smooth muscle contractions in pregnant and non pregnant rats in vitro 17 and contractions of nerve muscle preparation of guinea pig intestine.18 In view of this type of variable responses observed in smooth muscles of different species, it was decided to study the effect of erythromycin on acetylcholine induced contractions in guinea pig ileum and rat colon as well as on spontaneous contractions of rabbit jejunum.

The study was approved by the Institutional Animal Ethics committee of T.N Medical College & B.Y.L. Nair Ch. Hospital. The rats, guinea pigs and rabbits required for the experiment were used from the departmental animal house. All experiments were conducted in accordance with guidelines of committee for purpose of control and supervision of experiments on animals (CPCSEA).

Healthy rabbits of either sex weighing between 2.5 to 3.0 kg were selected for the experiment. The rabbits were kept in normal conditions and on a routine diet and sacrificed on the day of the experiment.     On the day of the experiment, Tyrode’s solution was prepared fresh. The rabbit was sacrificed, abdomen was quickly opened and the jejunum was identified by tracing down the stomach. The abdominal contents were kept hydrated by a wet mop. After identification, 10 cm. of jejunum was cut and kept in oxygenated Tyrode’s solution. From the selected piece, 3 – 4 cm of the segment was cut and suspended in an organ bath. One end of the jejunum was attached to the oxygen tube and the other end to a frontal writing lever by means of a thread. The tissue was allowed to stabilize for 10 minutes. The physiological salt solution bathing the tissue was changed at intervals of 3 minutes. The drum was adjusted at the tip of writing lever and spontaneous contractions were recorded on the kymograph.

A guinea pig weighing about 450 gm were starved for 48 hours, being allowed water ad libitum. For the purpose of the experiment it was killed. The abdomen was quickly opened and the viscera inspected. In the right lower quadrant of the abdomen, the caecum a greenish sac like structure was identified. A payer’s patch of lymphoid tissue; using this patch as a landmark, the lower most 10 cm of ileum are removed from the abdomen and placed in a shallow dish containing warm Tyrode’s solution. With the help of a 25 ml pipette, the lumen of the ileum was gently rinsed out, care being taken not to exert a hydrostatic pressure of more than 10 cm water.

The ileum was then cut into segments of about 4 cm in the fully relaxed state, and sutures were taken with needle and thread through either end of a segment. With the lower suture the ileum was fixed on to the hooked end of a hollow oxygen tube while the upper thread was tied to the frontal writing lever. The tissue was positioned in an organ bath in Tyrode’s solution at 37˚ C aerated with oxygen or carbogen mixture.

Isotonic graded contractions were obtained with acetylcholine (ACh) using concentration ranging 1 to 100 µg/ml and were recorded on the kymograph. The lowest dose of ACh which gave an appreciable and comparable response (4-7 cm) was selected and the same dose was repeated to test for reproducibility. Then 100 µM of erythromycin was added to the organ bath and a response was recorded on kymograph for 30 seconds. It was observed if erythromycin caused contraction or relaxation as indicated by a change in baseline. Then, a contact period of 3 minutes was given to allow the drug to act on the tissue.

Afterwards, the selected dose of ACh was added to the organ bath to see if erythromycin has altered the response to ACh. The tissue was then washed twice every 5 min. The response of selected dose of ACh was again recorded for 30 sec to see if it achieved its original height. Then after a wash recording with the next higher dose of erythromycin was tested. The same procedure was repeated with 300 μM, 500 μM and 1000 μM of erythromycin. Six such experiments were done.

Healthy rats of either sex weighing between 150-250 gm were selected for the experiment. They were kept fasting for 48 hrs and sacrificed on the day of experiment.

On the day of the experiment De Jalon’s solution was prepared fresh. The rat was sacrificed by decapitation. The descending colon was identified by inserting polythene tube rectally. Excluding the terminal 4-5 cm, a strip of 8 cm was isolated and cut, mesocolon was separated and removed. A 3-4 cm strip of colon tissue was suspended in a Dale’s organ bath (capacity 30 ml) at room temperature. One end of the colon was attached to an oxygen tube and the other to a frontal writing lever by means of a thread. The lever was loaded with tension of 1 gm and the tissue was allowed to relax for 45-50 minutes. The physiological salt solution bathing the tissue was changed at a regular interval of 5 minutes. At the end of 45 minutes the load was removed and the tissue was allowed to stabilize for a period of 5 minutes. A contact period of 30 seconds was allowed followed by a recovery period of 5 minutes for each dose of ACh. The remaining procedure was repeated exactly as in part b) i.e. for In vitro isolate Guinea pig ileum preparation

FIG. 1A: ERYTHROMYCIN (EM) 1 & 2 µM DID NOT CHANGE THE RATE OF CONTRACTION BUT HEIGHT OF CONTRACTION WAS REDUCED AS COMPARED TO NORMAL BASELINE TRACING (N). 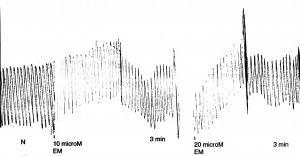 FIG. 1B: ERYTHROMYCIN (EM) 10 & 20 µM REDUCED BOTH THE RATE AND HEIGHT OF CONTRACTION CONSIDERABLY AS COMPARED TO NORMAL BASELINE TRACING (N). 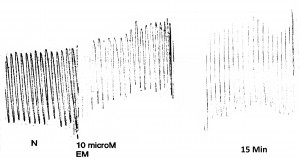 FIG. 1C: ERYTHROMYCIN (EM) 10 µM AFTER 15 MINUTES INCREASED THE HEIGHT OF CONTRACTION AND THE TISSUE APPEARS TO BE RECOVERING FASTER AS COMPARED TO NORMAL BASELINE TRACING (N). 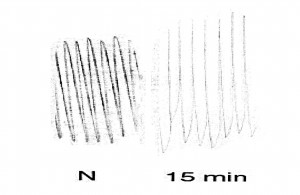 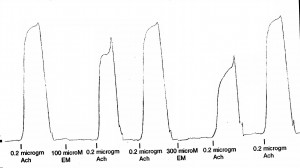 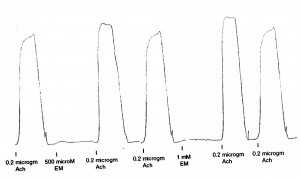 Erythromycin per se in concentrations of 100 to 1000 μM did not cause either contraction or relaxation of rat colon in vitro. The baseline of the tracing did not change after addition of erythromycin. However, erythromycin at all doses caused dose dependent increase in the magnitude of ACh induced contractions of rat colon. (Fig. 3A & 3B) 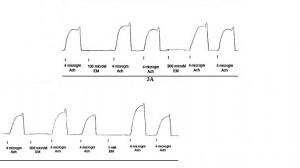 FIG 3A & 3B: ERYTHROMYCIN (EM) AT ALL DOSES CAUSED DOSE DEPENDENT INCREASE IN THE MAGNITUDE OF ACETYLCHOLINE (ACH) INDUCED CONTRACTIONS.

DISCUSSION: Erythromycin was discovered in 1952. Since last six decades, erythromycin has remained an important antibiotic in the treatment of infections. Despite the development of newer macrolide antibiotics (like clarithromycin, azithromycin) with extended spectrum of action and favourable pharmacokinetic properties erythromycin has an important place in therapy even today. 3 Erythromycin appears to produce the prokinetic effect on gastrointestinal tract by different mechanisms. Itoh Z et al (1984) reported that erythromycin at doses well below those required for antibacterial efficacy (0.03 mg/kg i.v.) induced a pattern of migrating contractions originating in the stomach in dogs which mimicked that of exogenously administered motilin, the gastrointestinal hormone. The study showed that there was increase in the blood levels of the hormone following administration of erythromycin.15

It has been shown that erythromycin interacts directly with the motilin receptor and exerts agonistic action and also causes stimulation of the cholinergic system which may be responsible for its effects on gastrointestinal motility. 12, 14 In animal experiments conducted both in vitro and in vivo, equivocal findings have been reported hence in the present study qualitative effect of erythromycin was studied on isolated rat colon, guinea pig ileum and rhythmically contracting rabbit jejunum.

In conclusion, the present study shows that erythromycin base has different effects on different parts of the gastrointestinal tract in different species of animals in vitro. The cellular mechanism of effects of erythromycin on various parts of gastrointestinal tract is still not known with certainty. The complex nature of control of gastrointestinal motility adds to the problem of interpreting the results of experimental studies. Further work is required to resolve this difficult question. The study is first of its kind where an attempt was made to evaluate the effects of erythromycin on gastrointestinal smooth muscles of different species of commonly used laboratory animals. But since the study was carried out in in-vitro system which is simplification of much more complex system, it would be extremely difficult to extrapolate the findings to the biology of intact organism.