STUDY OF ELECTRODE KINETICS AND THERMODYNAMIC PARAMETERS OF TINIDAZOLE POLAROGRAPHYCALLY

STUDY OF ELECTRODE KINETICS AND THERMODYNAMIC PARAMETERS OF TINIDAZOLE POLAROGRAPHYCALLY

The electrochemical reduction of anti- parasitic drug “Tinidazole” has been carried out in aqueous solution in the pH range 2.3 to 11.3 by Direct current (DC) polarography. Tinidazole exhibits one or two reduction peaks depending on pH. In basic medium one reduction peak was observed. Along with different pH, studies of drug have been carried out with different concentrations of drug and at different temperatures. The reduction of tinidazole was found to be irreversible so kinetic parameters (Ko fh, αn) are evaluated using Meites-Israel and Gaur-Bhargava’s methods. Thermodynamic parameters such as ∆Hp≠, ∆Hv≠, ∆G≠ and ∆S≠ are also evaluated.

INTRODUCTION: Tinidazole (TNZ) [1- (2-ethyl sulfonylethyl) - 2- methyl- 5- nitro- imidazole] is an anti- parasitic drug used against protozoan infections. It is highly effective for the treatment of trichomoniasis 1, giardiasis and amoebiasis. The oral single dose of TNZ is equivalent to a 3- day therapy with metronidazole without substantial side effects 2. Outside the United States, it has been widely used to treat bacterial vaginosis 3-4. 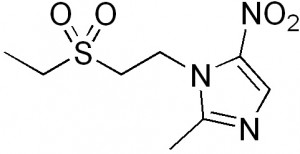 Tinidazole [1- (2- ethylsulfonylethyl)- 2- methyl- 5-nitro-imidazole]: Several methods have been reported for the determination of TNZ, including spectrophotometery 5-8 and Chromatography 9-11. Little attention has been paid to the determination of TNZ using the electrochemical techniques 12-15. But unfortunately no one paid attention about kinetic and thermodynamic parameters of TNZ. So in present paper I worked out this. Kinetic parameters (Ko fh, αn) are calculated by Meites-Israel16 and Gaur-Bhargava’s methods 17.

The Elico digital pH meter model 111E was used to measure the pH of the analytes.

Proposed Procedure: The general procedure used to produce DC polarograms was as follows;

An aliquot (10 ml) of experimental solution which contains B.R. Buffer, Triton-X-100(Maxima Suppresser) and water was placed in a dry, clean polarographic cell and deoxygenated with nitrogen for 15 min. the current-voltage curves were measured manually. The negative potential was applied to the working electrode with 150 mV/min span rate and 100 nA/div sensitivity of current measurement. After the background polarogram had been obtained, aliquots of the required amounts of TNZ solution were added.

RESULTS AND DISCUSSION: The effect of pH on the current-voltage curve at a concentration 1.6 × 10-3 M TNZ was studied over the pH range 2.3 – 11.3. TNZ gives rise to one or two reduction peaks depending on pH. In basic medium one reduction peak was obtained which refers to the six – electron reduction of nitro group to the corresponding amine. In acidic medium TNZ exhibits two reduction peaks. The height of the first wave is twice that of the second. The first wave corresponds to the reduction of the nitro group to form intermediate hydroxylamine, transferring four electrons while the second wave corresponds to the reduction of hydroxylamine to amine, transferring two electrons 18-19.

The direct current polarogram (DCP) at different pH values for the reduction of TNZ at a concentration of 1.6 × 10-3M are shown in fig. 1. The values of the diffusion current and half wave potential for the first wave are shown in table 1. 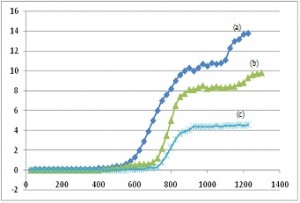 The polarogram at pH 11.3 was much sharper and well defined so this pH was chosen for subsequent work. The effects of concentration of TNZ on polarogram are listed in table (2), the concentration of TNZ was varied from 0.8 × 10-3M to 4.0 × 10-3M. The plots of log [i/(id-i)]  Vs Ed.e. were linear with slope values much higher than expected for reversible reaction which suggest that electrode reaction is irreversible. The values of E1/2 are almost constant and id increases with increasing concentration of TNZ as expected. Since the reduction of TNZ is irreversible hence kinetic parameters, like forward rate constant (Ko fh) and transfer coefficient (αn) have been calculated using Meites-Israel and Gaur-Bhargava’s methods.

All symbols have their usual meanings. The effect of concentration of tnz on wave and hence on kinetic parameters is given in table 2. The effects of temperature on polarogram are listed in table 3, at 35oC well defined and well shaped wave was observed.

Further, thermodynamic parameter (ΔH#p, ΔH#v, ΔG#, ΔS#) have been reported in Table (4). The enthalpy of activation at constant pressure (ΔH#p) has been calculated by substituting the value of slope of the plot (log K0fh v/s 1/T) in the Vant Hoff equation.

From this relation ΔH#v (enthalpy change of activation at constant volume) was evaluated, the activation free energy change (ΔG#) was determined by relationship.

The plot of log K0fh vs. 1/T is found to be linear from the slope of which the values of ΔH#p, ΔH#v, ΔG# and ΔS# have been evaluated and presented in Table 4.

A perusal of the values of various quantities presents in table 4 show that activation free energy change (ΔG#) is positive at all the temperatures suggesting the non spontaneous nature of electrode process. Positive value of ΔS# suggests that formation of activated state is accompanied by increase of entropy. From table 4, it can be concluded that as we increase the temperature values of the ΔG# increases and that of the ΔS# decreases continuously, it shows that the non spontaneity of electrode process increases with temperature.

CONCLUSION: The advantages of this method lie in the rapid qualitative determination of TNZ in pharmaceutical formulations, easy preparation of the sample, fair enough reproducibility and use of inexpensive instrumentation. On the other hand, the suggested method is cheap and fast, accurate and highly reproducible and more simple and practical than the voltammetric methods using the pretreated glassy carbon electrode 12. Therefore, the presented method can be recommended for routine analysis of TNZ in pharmaceutical formulations and may be adopted in the pharmacopoeias.

ACKNOWLEDGEMENT: We are thankful to the Head, Department of Chemistry, University of Rajasthan, Jaipur, to provide all facilities for research work.