ABSTRACT: The present study was carried out to evaluate oral hypoglycemic activity of rhizome of Hemidesmus indicus R.Br. in Albino wistar rats. Hemidesmus indicus (Family: Asclepiadaceae) is a commonly known Indian Medicinal Plant. It contains various phytoconstituents like hemidesminine, hemidine, hemidesmin-1 and hemidesmin-2 and other chemical constituents like glycosides, flavonoids, tannins, sterols and volatile oils. Diabetes mellitus (DM), commonly referred to as diabetes, is a group of metabolic diseases in which there are high blood sugar levels over a prolonged period. Streptozotocin induced diabetic albino wistar rat by administrating graded oral doses (200 and 400 mg/kg b.wt.) injected to group 3 and 4 for 90 days. This study also includes histopathological studies of pancreas. Phytochemical screening of methanol rhizome extract of Hemidesmus indicus R.Br.   The presence of alkaloids, saponins, cardiac glycosides, tannins and steroid. Metformin (100mg/kg) as standard oral hypoglycemic agent for 12 weeks resulting in significantly reduction in blood glucose. The present research work indicated that Hemidesmus indicus R.Br. methanol extract of rhizome (HIME) have prominent antidiabetic effect at a dose of 400 mg/kg in experimental diabetic rats.. Experimental results showed that the extract is capable of decreasing blood glucose level associated with diabetes. It was concluded that administration of methanol extract of rhizome of Hemidesmus indicus R.Br.(HIME) was effective in decreasing the blood glucose level.

INTRODUCTION: Medicinal plants, since time immemorial have been in use for treatment of various diseases all over the world. Diabetes mellitus is a metabolic disorder characterized by hyperglycemic, glucoseurea and negative nitrogen balance and it is mainly due to lack of insulin secretion in beta cells of pancreas and desensitization of insulin receptors for insulin. The disease has reached epidemic proportions in the present century. It is the most prevalent disease in the world affecting 25% of population and afflicts 150 million people and is set to rise to 300 million by 2025. 1

Several drugs such as biguanides and sulfonylureas are presently available to reduce hyperglycaemia in diabetes mellitus. These drugs have side effects and thus searching for a new class of compounds is essential to overcome these problems. 2 Management of diabetes without any side effects is still a challenge to the medical community. There is continuous search for alternative drugs. Therefore, it is prudent to look for options in herbal medicine for diabetes as well.

Traditional antidiabetic plants might provide new oral hypoglycaemic compounds, which can counter the high cost and poor availability of the current medicines/present day drugs for many rural populations in developing countries. In accordance to the recommendations by the WHO expert committee on diabetes mellitus, investigations on hypoglycemic agents from medicinal plants have become more important.

Collection and identification of plant material: The plant rhizome was procured from Midnapur District in West Bengal. The plant was authentified as Hemidesmus indicus R.Br by Dr. Sunita Garg (Chief Scientist), National institute of science communication and information resources (NISCAIR). Pusa Campus, New Delhi. A voucher specimen of the plant is preserved in the herbarium (NISCAIR/RHMD/Consult/2015/2848/41).

Preliminary phytochemical screening: The rhizomes of hemidesmus indicus R.Br was subjected to preliminary phytochemical screening for detection of various plant constituents. 6 Standard screening test of the extract was carried out for various plant constituents. The crude extract was screened for the presence or absence of secondary metabolites such as alkaloids, carbohydrate, phenolic compounds, flavonoids, saponins, steroids, tannins, etc. by using standard procedures. 7

Streptozotocin induced model of diabetes mellitus: The five groups, containing six animals in each group were taken. Diabetes was induced experimentally in rats by a single intraperitoneal injection of a freshly prepared solution of streptozotocin (STZ) at a dose of 60 mg/kg body weight in normal saline. After 48 hr, blood was collected with all aseptic precautions from the tail vein of the rats under light ether anesthesia and blood glucose levels were determined. The animals were considered to be diabetic if the blood glucose values were more than 180 mg/dL, and those animals alone were used for the study.

Diabetes was developed and stabilized in STZ-treated rats over a period of 7 days. Control rats were given normal saline. The hypoglycemic activity of Hemidesmus indicus R.Br. methanol extract was assessed by feeding the test extract (200, 400 mg/kg bw/day) to extract treated diabetic animals. The animals were followed up to 5 hr to check the time required for the test extract to produce peak hypoglycemic activity.

The animals were divided into five groups of six animals each.

The rats were followed for 5 hr, with the blood sugar levels being estimated at the end of 1 h, 3 h, and 5 h. Test drug treatment was continued for 12 weeks, at the end of which the rats were sacrificed with marked response and pancreases was isolated and carries out histopathological studies.

Histopathology of pancreas: After the end of the 12 weeks, food was withdrawn from the rats and they were fasted overnight but the animals had free access to water ad libitum. They were then euthanized under heavy ether anaesthesia and sacrificed. Pancreas was surgically removed. Thereafter, the tissues were placed in 10% formalin (diluted to 10% with normal saline) for 1 hr to rectify shrinkage due to high concentration of formalin. The tissues were dehydrated by ascending grades of isopropyl alcohol by immersing in 80% isopropanol overnight and 100% isopropyl alcohol for 1 hr. The dehydrated tissues were cleared in two changes of xylene, 1 hr each. The wax impregnated tissues were embedded in paraffin blocks using the same grade wax. The paraffin blocks were morented and cut with rotary microtome at 3 micron thickness. The sections were floated on a tissue floatation bath at 40°C and taken on glass slides and smeared with equal parts of egg albumin and glycerol. The sections were then melted in an incubator at 60°C and after 5 min the sections were allowed to cool. The sections were deparaffinised by immersing in xylene for 10 min in horizontal staining jar. The deparaffinised sections were washed in 100% isopropyl alcohol and stained in Eosin and hematoxylin for 8 min in horizontal staining jar. After staining in hematoxylin, the sections were washed in tap water and dipped in acid alcohol to remove excess stain (8.3% HCl in 70% alcohol).

The sections were then placed in running tap water for 10 min for blueing (slow alkalization). The sections were counter stained in 1% aqueous Eosin (1 gm in 100 ml tapwater) for 1 min and the excess stain was washed in tap water and the sections were allowed to dry. Complete dehydration of stained sections was ensured by placing the sections in the incubator at 60°C for 5 min. When the sections were cooled, they were mounted in diphenyxylene (DPX) mount having the optical index of glass (the sections were wetted in xylene and inverted on to the mount and placed on the cover slip). The architecture was observed low power objective under microscope. The cell injury and over aspects were observed under high power dry objective. 9

Statistical analysis: All results were expressed as mean ± SEM. The data were analyzed using analysis of variance (ANOVA), and the group means were compared by Dunnett’s test. Values were considered statistically significant with P < 0.05. Graph Pad Instat was used for the analysis of data.

Preliminary phytochemical screening: The results indicated the presence of flavonoids, alkaloids, saponins, carbohydrate, triterpenoids, tannins, and mucilage compounds in methanol extract of Hemidesmus indicus R.Br. These findings of phytochemicals were good enough to medicinal and pharmacological reflect its importance. These studies have identified that compounds such as polysaccharide flavonoid, terpenoid, tannin and steroids 10 are responsible for antidiabetic effect.

Oral hypoglycemic activity: In diabetic control group there was significant (P < 0.01) increase in blood glucose levels from 180mg/dl to 399 mg/dl when compared to normal control. In the metformin (100 mg/kg) and methanol extract (400 mg/kg) treated groups, the peak values of blood sugar significantly decreased from 183mg/ dL to 92 mg/dL and from 296 mg/dL to 100 mg/dL on the 12 weeks, respectively. In methanol extract (200 mg/kg) treated group the blood glucose level decreased from 252 mg/dL to 114 mg/dL. Hence, in this study observations showed that the HIMRE (400 mg/kg) reduced the blood glucose level in diabetic rats but values did not return to those of normal controls.

Therefore, HIMRE (400 mg/kg) possessed more significant (P < 0.01) antidiabetic activity while HIMRE (200 mg/kg) showed less significant antidiabetic activity, when compared with diabetic control. There was a marked reduction in blood glucose level (in 12 weeks) in STZ induced diabetic animals. This effect of the HIMRE (400 mg/kg) is nearly equal to, if not better than, that of metformin (100 mg/kg). Streptozotocin has a destructive effect on the β cells of the pancreas, which led to impaired glucose stimulated insulin release and insulin resistance, both of which are marked feature of type 1 diabetes. 11

The present investigation indicated the oral hypoglycemic affect in STZ induced diabetic rats. It was observed that significant (P < 0.01) decrease in blood glucose in HIMRE treated diabetic rats, when compared with diabetic control rats. The possible mechanism of HIMRE on hypoglycemic action may be through potentiation of pancreatic secretion of insulin from β-cell of islets and/or due to enhanced transport of blood glucose to the peripheral tissue or by other mechanisms such as stimulation of glucose uptake by peripheral tissue, inhibition of endogenous glucose production or activation of gluconeogenesis in liver and muscles. 12

Histopathology of Pancreas: After 12 weeks of treatment period, the histopathological examination of the pancreas of the normal control rats showed round and elongated islets which were evenly distributed throughout the cytoplasm. In diabetic

control rats, the cells were irregular, not well defined and necrosis of the cells could be clearly appreciated. Nuclear changes, karyolysis, disappearance of nucleus and in some places, residue of destroyed cells were visible. Relative reduction of size and number of islets especially around the central vessel and severe reduction of beta cells were clearly seen. 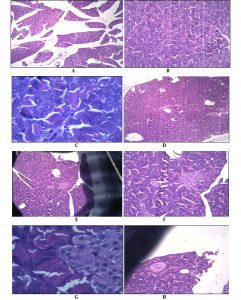 CONCLUSION: It was concluded that oral administration of methanol extract of rhizome of Hemidesmus indicus R.Br. was effective in decreasing the blood glucose level. Experimental results showed that the extract is capable of decreasing blood glucose level associated with diabetes. The observed hypoglycemic effects of this plant could have resulted from the combined activity of these compounds present in the extract. So, the plant Hemidesmus indicus R.Br. rhizomes will be used as a potent antidiabetic agent for the treatment of type 1 Diabetes mellitus.