INTRODUCTION: Plants have been used in traditional medicine for several thousand years. The secondary metabolites of the plants are the major sources of pharmaceutical, food additives and fragrances. Although it has many medicinal properties, it is particularly contain numerous active constituents of immense therapeutic value. In the present era of drug development and discovery of newer drug molecules many plant products are evaluated on the basis of their traditional uses. One of the many plants which are being evaluated for their therapeutic efficacies is Achyranthes aspera which is commonly known as Latjeera 1.

It is an erect or procumbent, annual or perennial used spermicidal 2, antipyretic 3 and as a cardiovascular agent 4. Also used for the treatment of fever, dysentery and diabetes. Roots are used as astringents to wounds and stomach pain 5.

It is a very important plant for its large number of medicinal properties 6 as well as medicinally important chemicals like ecdysterone 7, achyranthine 8, betaine, pentatriaontane, hexatria-contane, 6-pentatriacontanone and tritriacontane.

Many traditional uses are also reported like antiperiodic, purgative and laxative, in various types of gastric disorders and in body pain 15.

Cool and weighed for the determination of water soluble ash with reference to the bone dried drug. 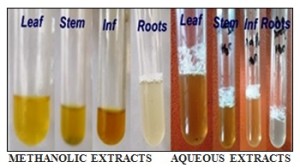 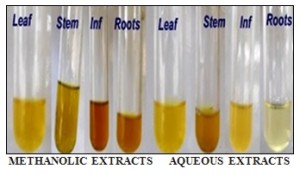 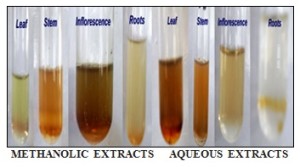 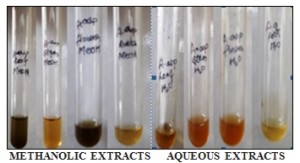 Glycosides were found present in both methanolic and aqueous extracts as the brown ring was obtained in test tubes. The tests for proteins were obtained positive for methanolic stem and roots extracts and negative for leaf and inflorescence extracts. Whereas all extracts of Achyranthes aspera showed positive result for proteins. This shows that proteins are well dissolved in water than methanol.

CONCLUSION: The present work is for study of different parts of Achyranthes aspera, physiochemical parameter such as loss of drying, ash value, acid soluble ash and water and methanol soluble extractive values, qualitative and quantitative test of   Achyranthes aspera were determined. Physiological studies were carried out to determine basic characteristic of particular species and proves to be the standard for identification of the plant species.Preliminary phytochemicals screening of methanol extract and aqueous extracts showed the presence of flavonoids, saponins, proteins and glycosides.