The dried aerial parts of Cardiospermum halicacabum Linn were subjected to extraction using the solvents (petroleum ether, chloroform, Ethyl acetate and ethanol) in increasing order of polarity. The prepared extracts were then subjected to preliminary phytochemical analysis. It was found plant possesses carbohydrates, alkaloids, sterols, flavanoids and saponins. All extracts were selected for further study. The analgesic activity of all extracts of aerial parts was assessed in albino mice using thermal stimulus model. morphine and Paracetamol were used as standard. The results indicate that, petroleum ether extract showed 34% (0.15mg/ml) and 58 %( 0.3mg/ml) significant activity, when compared with morphine. Comparison with Paracetamol the pet ether extract showed 48% (0.3mg/ml) and 82% (0.3mg/ml) significant activity. The ulcer activity was determined by pylorus ligation technique. Ranitidine (50mg/kg) used as standard. The ethanol extract showed 48.2% (18.75mg/2ml) significant antiulcer activity compared with standard drug. From the present study it may be concluded that the constituents present in all the extracts may be responsible for both activities.

INTRODUCTION: Cardiospermum halicacabum Linn, Family: Sapindaceae. As a wild climber through out the plains of India, ascending to 1300 m in the North Western Himalaya. Cardiospermum halicacabum Linn is a small genus of ornamental, herbaceous or shrubby vines. An annual or sometimes perennial climber, 3.5 m in height commonly found as a weed throughout India, ascending upto 1200m. Leaves deltoid, biternate, 3-8 cm long, leaflets deeply cut, acuminate, laterals obolong or ovate, terminal rhomboid- lanceolate, flowers white in umbellate cymer, with a pair of peduncles modified into tendrils; capsules depressed – pyriform ,covered with bladder like calyx, winged at the angles; seeds globose, black, smooth, 4-6mm, with a small, white, heart shaped aril. In literature review it was found that the Plant used as amenorrhea, anti arthritis, anti-inflammatory, analgesic, antispasmodic, antihemolytic and anti rheumatic. The root used as aperient in orchitis, diuretic, used in liver disorders and dysentery. The leaf juice used for asthmatic treatment and drooped into nostrils relives one side head-ache 1, 2.

The dried plant powder is being used for bronchitis by oral route. The plant is being to reduce acute rheumatism and used as tincture 3-14. Cardiospermum halicacabum Linn contains flavonoids, alkaloids, steroids, fatty acids, terpenoids, saponins, sugars, sterol, an essential oil, resin, non glucosidal bitter substance, tannin, large amount of potassium nitrate and other constituents 15, 16, 17, 18.However, there are no reports on the diuretic activity of the plant. Hence, the present study was designed to verify the claims of traditional and use in Unani system of medicine.

MATERIALS AND METHODS: Fresh aerial parts of Cardiospermum halicacabum Linn. were collected during the month of September 2007, from Ottanchatiram, Dist. Dindugal, Tamil Nadu. The plant was identified and authenticated by Dr. Stephen Botanist Professor in American college, Madurai and herbarium specimen deposited at K.M.College of Pharmacy, Madurai. The fresh plant material was then dried under shade. Dried plant material was powdered using mechanical grinder and passed through 60# sieve to get the powder of desired coarseness. Powdered material was preserved in an air tight container.

Animals: Male albino rats weighing 200-300 gm of either sex were procured from Cadila Health Care Ltd., Dholka, Ahmedabad. All the animals were kept in standard polypropylene cages and maintained at 27ºC ± 2ºC under 12 h. dark/light cycle. The animals were fed with standard rat feed and water was given ad libitum. Ethical clearance for handling the animals and the procedures used in the study was obtained from the institutional animal ethical committee.

Analgesic Sctivity 19, 20, 21, 22, 23: The technique of Janssn and Jageneau (1957) was employed to detect the effect, using thermal stimulus. The three male albino mice weighing20-25gm were selected. The analgesiometer was maintained at 55°C and the animals were paced over it. The reaction time i.e, the time between placing animals on the analgesiometer and the beginning of licking the fore or hind paw by the animals was recorded for all the mice. After the fist attempt the number of attempts to lick the hind paw per 30seconds was also recorded.

Then the animals were divided into four groups. The first group of animals (three animals) received the poly ethylene glycol (blank) intraperitonially. The second group of animals (three animals) received the Morphine hydrochloride 10mg/kg and third group of animals were given (three animals) paracetamol at the dose of 15mg/kg. The fourth group animals (24 animals) again divided into 4 sub groups each of six animals each. The first sub group three animals received the petroleum ether extract 15mg/kg and another three animals received the petroleum ether extract 7.5mg/kg. In the same manner the remaining 3 sub groups of animals were given with the three extracts such as chloroform extract, ethyl acetate extract and ethanol extract in the two different doses (15mg/kg and 7.5mg/kg).  After administering the drugs the animal was placed on the analgesiometer maintained at 55°C after one hour of the administration. The reaction time was recorded. After the first attempt, the numbers of subsequent attempts to lick the hind paw which was recorded for 30 seconds intervals.

The test solution was prepared by dissolving 0.5gm of each extract in 50ml (10mg/ml) of 1% carboxyl methyl cellulose suspension and administered according to the body weight in the oral route. Under light ether anaesthesia the abdomen was opened by small midline incision below the xiphoid process; pyloric portion of the stomach was slightly lifted out and ligated correctly to avoid traction to the pylorus or to its blood supply and they are deprived of both food and water during the postoperative period. After four hours of pyloric ligation, the stomach was excised and the gastric juice was collected into test tubes. The stomach was inflated by injecting saline (10ml) and fixed in 5% formalin for 30 minutes. Then the stomach was cut open along the greater curvature and the inner mucosal membrane surface was examined under 6.4 binocular magnifiers.

Total Acidity: The gastric juice was titrated against 0.01N sodium hydroxide using phenolphthalein as indicator until the pale pink colour observed and the acidity was expressed as equivalent mg HCl/100 g body weight.

Free Acidity: It was determined in a similar manner of total acidity using Toper’s reagent as indicator and 0.01N Sodium hydroxide was run until the canary yellow colour observed.

Ulcer Index: The gastric ulcers were measured by scoring of affected lesions of stomach mucosa and the ulcer index was determined.

DISCUSSION: In most of the cases the etiology of the ulcer is unknown. It is generally accepted that it results from an imbalance between aggressive factors and the maintenance of the mucosal integrity through the endogenous defense mechanism 31. To regain the balance, different therapeutic agents including plant extracts are used to inhibit the gastric acid secretion or to encourage the mucosal defense mechanisms by increasing mucus production, stabilizing the surface epithelial cells, or interfering with the prostaglandin synthesis.

Even though many products in the market for the treatment of gastric ulcers, including antacids, proton pump inhibitors, anti cholinergic and histamine H2-antagonists, are used, most of these drugs produce several adverse reactions, such as gynecomastia, hematopoietic changes, acute interstitial nephritis 32, thrombocytopenia 33, anaphylaxis reactions 34, nephrotoxicity and hepatotoxicity 35. Medicinal plants are amongst the most attractive sources of new drugs, and have been shown to give promising results in treatment of gastric and duodenal ulcers36.

Most of the cases the etiology of the ulcers in unknown, it is accepted that they result from an imbalance between aggressive factors and maintenance of mucosal integrity through endogenous defense mechanisms. Also it has been reported that non-steroidal anti inflammatory drugs (NSAIDs) associated gastric ulceration occurs in 30 percent of users that leads to hospitalization and is also associated with high mortality. Aspirin (ASP) is one of the most widely used NSAIDs, which damages gastrointestinal mucosa by irritant action, causing alterations in mucosal permeability and/or suppression of prostaglandin synthesis 37. Most of the commonly used drugs such as H2-blockers (ranitidine, famotodine etc), M1-blockers (pirenzepine, telenzepine etc), proton pump inhibitors (omeprazole, lansaprzole etc), decrease secretion of acid while, drugs like sucralfate and carbenoxolone promote mucosal defenses. Not long, the role of these drugs on the defensive factors is gaining importance. It is now assumed that these drugs ultimately balance the aggressive factors (acid, pepsin, H.pylori. bile salts) and defensive factors (mucin secretion, cellular mucus, bicarbonate secretion, mucosal blood flow and cell turnover). Although these drugs have brought about remarkable changes in ulcer therapy, the efficacy of these drugs is still debatable. Reports on clinical evaluation of thee drugs show that thee are incidences of relapses and adverse effects and danger of drug interactions during ulcer therapy. The search for an ideal anti ulcer drug continues and has also been extended to herbal drugs in search for new and novel molecules, which afford better protection and decrease the incidence of relapse 38. 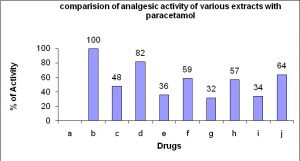 FIG. 1: COMPARISION OF ANALGESIC ACTIVITY OF VARIOUS EXTRACTS WITH PARACETAMOL 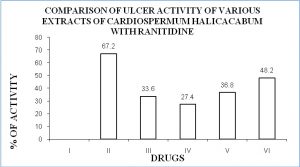 FIG. 2: COMPARISON OF ULCER ACTIVITY OF VARIOUS EXTRACTS OF CARDIOSPERMUM HALICACABUM WITH RANITIDINE