STUDY OF POTENTIAL TO INHIBIT HEMOZOIN FORMATION OF SOME NOVEL AMINOPROPANOLS

STUDY OF POTENTIAL TO INHIBIT HEMOZOIN FORMATION OF SOME NOVEL AMINOPROPANOLS

ABSTRACT: One of the factors responsible for malaria pathogenesis is the suppression of host immune responses. This suppression enhances parasitemia and diminishes the host immune response to malaria-expressed proteins and other pathogens. Hemozoin is a key metabolite associated with severe malaria anemia (SMA), immunosuppression, and cytokine dysfunction. Targeting of this pigment may be necessary in the design of new therapeutic products against malaria. In the present research, some novel compounds are synthesized and targeted against hemozoin growth. The consideration of new chemotherapeutic targets in malaria research is most likely to identify new classes of drugs. The present work deals with the synthesis of a small library of 2-alkoxy/phenoxy-3-amino-3-arylpropan-1-ols by reductive ring opening of the corresponding azetidine-2-ones. After characterization of synthesized compounds, these were evaluated for hemozoin formation inhibition assay. The results showed that all compounds are inhibiting hemozoin formation comparable to Clotrimazole. This may be concluded that the synthesized compounds exhibit antimalarial activity via inhibition of hemozoin formation.

INTRODUCTION: Malaria has plagued humankind since ancient times and is still a significant threat to half of the world’s population. Malaria is the fifth most common cause of death from infectious diseases worldwide 1. The World Malaria Report 2015 written by the World Health Organization (WHO) summarizes advances that have taken place in each WHO region over the 2000–2015 period. Malaria is endemic in 95 countries mainly in Africa (88%). This report shows that this goal was achieved with an almost 37% and 60% drop in malaria incidence and in death rates, respectively, over this period.

In 2015, 214 million cases of malaria were recorded including 438 000 that have led to the death of the patients, reflecting a decline of 18% and 48% in cases and deaths, respectively, over the 2000–2015 period. 2. Malaria parasites reside in erythrocytes throughout their life cycle in human beings. P. falciparum invades red cells of all ages and digest hemoglobin into small fragments consisting of about 20 different amino acids and free ferrous [Fe(II)protoporphyrin IX], which is rapidly oxidized to heme 3. Free toxic heme is rapidly oxidized to hematin and sequestered into inert, nontoxic crystalline Hemozoin, Hz, which is present in the pRBC 4.

The presence of Hz in RBC results in appearance of antigenic molecules on membranes of these cells 5. Recognition of Hz-containing RBC results in phagocytosis by circulating macrophages and removal from circulation.

A study of the antigens exposed on the surface of pRBCs with different isolates of P. falciparum showed that the surface antigens could induce isolate-specific immunity 6. Over 25-75% of the erythrocyte hemoglobin is digested during growth of the parasite in erythrocytes 7. Heme then undergoes auto-oxidation to liberate toxic hematin [aqua Fe(III) protoporphyrin IX]. The parasite detoxifies hematin and converts it   to an insoluble material known as hemozoin (malaria pigment) 8. For hemozoin formation histidine rich proteins like Pf-hrp-2 play key role. It may serve as precursors for hematin binding prior to formation as hemozoin 9. The hemoglobin degradation mechanism was studied in detail, and it was shown that it implies enzymes (proteases) present in the food vacuole of the parasite such as two aspartic (plasmepsins I and II) and cysteine (falcipain) proteases 10. In the food vacuole, hemoglobin is degraded into heme, which is polymerized into insoluble hemozoin pigment and globin, which is hydrolyzed to individual amino acids. Antimalarial drugs appear to act by preventing hemozoin formation, producing free radicals in the food vacuole or by preventing globin hydrolysis 11.

The formation of hemozoin is apparently the primary mechanism of heme detoxification in malaria parasites 12. Free heme is oxidatively active and toxic to both the host cells and the malarial parasites, and it causes parasite death. Heme could cause extensive damage to membranes and inhibit a variety of enzymes resulting in the death of the parasite. Due to the absence of heme oxygenase, the parasite is unable to cleave heme into an open-chain tetra pyrrole, which is necessary for cellular excretion 13. The heme neutralization process is one of the main targets of the antimalarial drugs, with different researchers expressing different views on whether the drugs affect catalytic enzymes or direct crystallization of hemozoin, or both, or alternatively affect the direct oxidation of heme 14.

The heme detoxification by P. falciparum results in the formation of β-haematin (BH) also known as hemozoin (HZ), which is a water-insoluble malarial pigment produced in the food vacuole by template mediated crystallization (“biocrystallization”), and a number of studies have been conducted in order to understand the hemozoin formation 15. Free heme is oxidatively active and toxic to both the host cells and the malarial parasites, and it causes parasite death. Heme could cause extensive damage to membranes and inhibit a variety of enzymes resulting in the death of the parasite 12.

The sequestration of heme into hemozoin is a suitable target for new antimalarials. Hence, an understanding of the mechanisms of hematin crystallization and its inhibition by antimalarials may prove to be influential for drug development 16. The fundamentals regarding the mechanism of hematin crystallization and its inhibition remain elusive. The nature of the environment within the parasite where hemozoin crystals recruit hematin and grow is still unkown. The two likely candidates are the aqueous phase in the parasite digestive vacuole (DV) 17, 18 and the lipid subphase that has been reported to reside either in the DV bulk 19, 20 or along the DV membrane 17, 21. The mechanism of hematin crystallization may be classical, i.e., addition of molecules to growth sites 22, or non-classical, i.e., association of precursors 23–25. The mechanism of action of the inhibitor species, it is possible that the inhibitors either reduce the concentration and activity of hematin in the growth medium through complexation 26, 27, or interfere with crystallization by binding to the crystal surface(s) and restricting solute addition.

The present work deals with the synthesis of 2-alkoxy-3-amino-3-(3/4 substituted aryl) propan-1-ols 3, followed by study of their potential to inhibit hemozoin formation. The synthesis of these compounds involve reaction between the appropriate imines and ketenes. The substituted aldehydes and appropriate amine is condensed in dichloromethane in the presence of magnesium sulfate as drying agent which results in corresponding imines. The treatment of these 3/4-substituted phenylmethanimine 1 with methoxy-, phenoxy-, or benzyloxyacetyl chloride in dichloromethane in the presence of triethylamine results in corresponding novel azetidin-2-ones 2. Then 4-arylazetidin-2-ones 2 were subjected to a reductive ring-opening by means of lithium aluminum hydride in diethyl ether, results in corresponding 2-alkoxy/phenoxy substituted 2-alkoxy-3-amino-3-(3/4 substituted aryl) propan-1-ols, 3 31, 32. The combination of a γ-amino alcohol moiety and an aryl group in these propanes might result in novel and easily accessible classes of antimalarial agents.

To obtain molecular diversity within γ-aminoalcohols, a variety of different representatives of this class of compounds was prepared by altering the amino group (R2= Me, Bu, iPr, nPr), the aryl moiety (R1= m-NO2, p-NO2, p-Cl) and the alkoxy or phenoxy substituent (R3­= Ph, Bn). This small library of novel γ-aminoalcohols was then screened for antimalarial activity by their hemozoin formation inhibition ability 20. Clotrimazole and compounds with different molar equivalents (0.12-5.0) to haemin was prepared by dissolving compounds separately in DMSO. 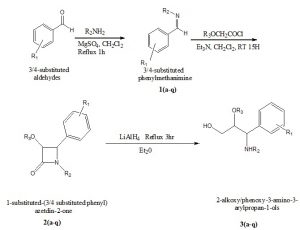 MATERIALS AND METHODS: All the reagents and solvents were used as purchased without further purification. Melting points were determined are uncorrected. The qualities of all the synthesized compounds were tested by TLC using a mixture of non-aqueous solvents. IR spectra were obtained on a IR Affinity 1 Spectrophotometer, Shimadzu, Kyoto, Japan. NMR spectra were recorded on a Brucker Spectrospin DPX 300 Spectrophotometer, Bruker AG, Switzerland with DMSO as solvent. Purity of the synthesized compound was checked by TLC using Silica gel-G plates.

Experimental Procedure: A mixture of 10 mmol of the appropriate aromatic aldehyde in 100 ml of dichloromethane was treated with 10 mmol of the appropriate amine and 15 mmol of magnesium sulfate. The mixture was refluxed for 1.5-3 h and then filtered. After evaporation of the solvent, N-(arylmethylidene)-amine 1 was obtained, and the solvent was further evaporated under high vacuum (to remove the last traces of solvent, if required). To an ice-cooled solution of N-(arylmethylidene)-amine 1 (10 mmol) and triethylamine (30 mmol) in dichloromethane (25ml) were added dropwise a solution of alkoxyacetyl chloride (11 mmol) in CH2Cl2 (10 ml). After stirring for 15-18 h at room temperature, the reaction mixture was poured into water (30 ml) and extracted with CH2Cl2 (twice using 25ml each time). Drying (MgSO4), filtration of the drying agent, and removal of the solvent afforded azetidin-2-ones, 2, this was purified by recrystallization from ethanol. To an ice-cooled solution of azetidin-2-ones 2 (10 mmol) in dry diethyl ether (50 ml) was added lithium aluminum hydride (20 mmol) in small portions. After reflux for 3-5 h, the reaction mixture was cooled to 00C and water (10 ml) was added in order to quench the excess of LiAlH4.

The resulting suspension was filtered and washed with diethyl ether (40 ml), and the filtrate was poured into water (50 ml) and extracted with diethyl ether (3×30 ml). Drying (MgSO4), filtration of the drying agent and removal of the solvent in vacuum afforded 2-alkoxy-3-amino-3-(3/4 substituted aryl) propan-1-ols, 3, which was purified by means of column chromatography on silica gel or recrystallization from absolute EtOH.

Procedure for Assay of hemozoin formation inhibition: 50 μl of an 8 mM solution of hemin chloride was dissolved in DMSO and compounds dissolved in DMSO, in doses ranging from 0.5 to 10 molar equivalents to haemin chloride. In control 50 μl distilled water was added. By adding 100 μl of 8 M acetate buffer (pH 5) the hemozoin formation was initiated and the plates were incubated at 37 ºC for 18 h. After centrifugation, the soluble fraction was collected. 200μl of DMSO was added to resuspend the remaining pellet in order to remove unreacted haematin. The plates were centrifuged again, the DMSO soluble fraction was collected and the residual pellet, consisting of pure precipitate of β-haematin, was dissolved in 200 μl of 0.1 M NaOH. 75 μl of it was transferred to new tubes and diluted four times by adding 0.1 M NaOH. The amount of haematin was determined by measuring the absorbance at 414 nm using UV spectophotometer (Shimadzu UV 1800). Clotrimazole was used as positive control.

The percentage inhibition of hemozoin formation was calculated using the formula given below:

The percentage inhibition of hemozoin by the standard drug clotrimazole was compared with the control. Method was standardized and validated.

RESULTS AND DISCUSSION: The target compounds were synthesized according to the synthetic pathway outlined in Scheme 1. Generally, the structures of the products were characterized by the presence of appropriate signals in NMR spectra and the characteristic peak in FTIR. The hemozoin inhibition assay of the synthesized compounds was studied using reported procedure 19, 20. All of the compounds were found to inhibit hemozoin formation to a certain extent comparable to Clotrimazole (Table 1).

These findings could provide rational for the hypothesis that haem could be the drug receptor, at least in part, for aminopropanols as antimalarial agent.

CONCLUSION: The mechanism of action of aminopropanols is still not clear. The action of synthesized compounds on hemozoin formation found to be considerable. The results help in concluding that aminopropanol derivatives are having antimalarial action because of hemozoin formation inhibition. A rich library will help in studying the exact mechanism of these compunds. On the basis of above conclusions, the parent nucleus could be explored further to obtain more potent derivatives.